—The opening services of the Hedding Methodist church yesterday were very largely attended and unusually interesting. Owing to the illness of Rev. Dr. George W. Brown of Troy, who was to have preached in the morning, his place was ably filled by Rev. Dr. Henry Graham of this village. In the afternoon the pulpit was occupied by Rev. John H. Coleman of Troy, who preached an eloquent sermon to a large congregation. In the evening the speakers were Rev. O. J. Squires, H. C. Curtis, H. Clay Bascom and Mr. Ford. Other laymen who were to have spoken were unable to be present owing to illness. Rev. Dr. Hughes, the presiding elder, was also ill and unable to be present, but, nevertheless, all three services were very successful. The congregations were composed of many members of the Troy and Lansingburgh churches. Over $850 was raised during the day by subscription and collection, which sum will be applied toward the completion of the new chapel. Tuesday evening another service will be held, when Rev. I. D. Van Valkenburgh will preach, and Thursday the chapel will be formally dedicated, Rev. W. H. Hughes having charge of the exercises.
“Lansingburgh.” Troy Daily Times. January 6, 1890: 3 col 3. 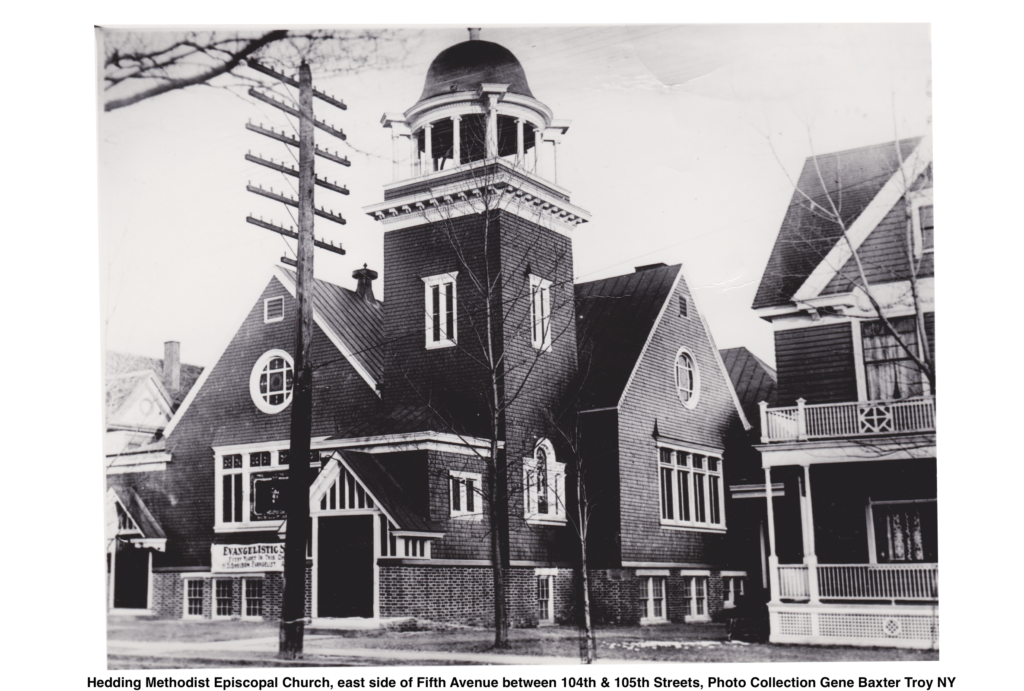 HEDDING METHODIST CHURCH WAS DESTROYED BY FIRE AT EARLY HOUR THIS MORNING
Loss Will Reach About $75,000, and Insurance Will Amount to $25,000—Believed to Have Been Caused By Overheated Furnace.
With a loss mounting up close to $75,000, Hedding Methodist Church, located at 230 Fifth Avenue, Lansingburgh, was destroyed in the early hours of this morning by a fire which, despite the combined efforts of practically the entire fire-fighting force of Troy, called to give battle to the flames, ravaged the interior of the structure completely, and left standing only a useless shell of building.
[…] The original church was a mere chapel, erected in 1889. In 1897 this was enlarged and in 1913 extensive improvements were made on the building. The memorial windows in the front presented by Adelaide F. Hunt, Grace Dugdale Small and Paul Alva Emery and one or two smaller windows on the side remained intact. Most of the others were shattered.
Troy Times. December 24, 1924: 5 cols 2-3.

By 1929, the site was taken by the Hedding Apartments, a two-story, six family brick building..