The Patent of Stone Arabia seems to have encompassed land from around 105th Street at the south, to the Cool Kill at the north (around Irish Road along or what’s been called Thieves Hollow), and to the east a portion of Mount Rafinesque and a portion of what is now the Troy Reservoir. It included the majority of what would become the Village of Lansingburgh and the hamlet of Speigletown.

It only included a portion of what would become the Town of Lansingburgh. Northern Lansingburgh would be expanded in 1819 by the annexation of portions of what had been William’s Tract and Van Cortland’s Tract and most of Isaac Sawyer’s First Tract within the Town of Schaghticoke. 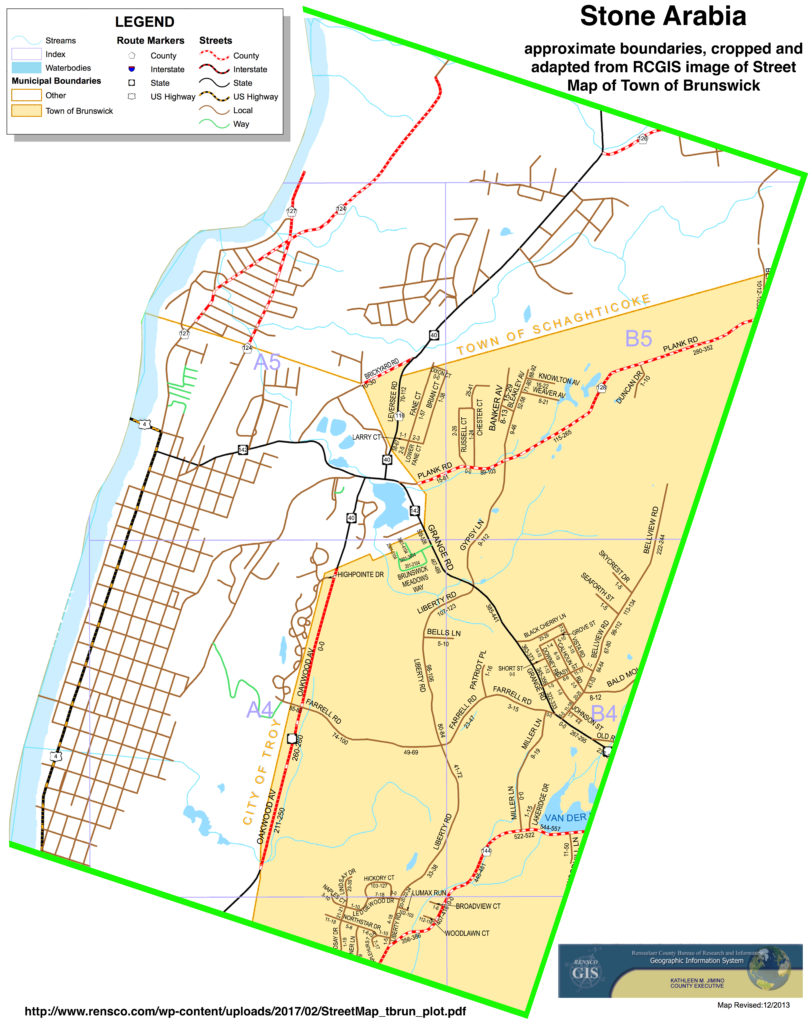 The original patentee did not long retain possession of the remaining property, Tascamcatick, but disposed of it to Joannes Wendell [Sr.], on the 26th day of May, 1683. Johannes Wendell: after-ward added to this purchase another piece of woodland which extended along the river northward to a certain Kill called by the Indians, Paensick.
These lands of Johannes Wendell were confirmed to him by Governor Thomas Dongan in a patent, dated the 22d day of July, 1686, known as the Steene (Stony) Arabia Patent. In the third year of the reign of King George III, and on the twenty-first day of June, 1763, Robert Wendell, heir of Johannes Wendell [Jr.], then in possession of this farm land, sold to Abraham Jacob Lansingh, for the sum of three hundred pounds, that part of his land, beginning opposite the middle branch of the Mohawk river, and running thence eastward as far as the Stony Arabia patent extended, formerly called and known by the Indian name Tascamcatick, excepting that which had been sold unto Simon Van Antwerpe, but, at that time, in possession of William Rogers.
Weise, A. J. History of Lansingburgh. Troy, NY: William H. Young, 1877. 6.

The conveyance of the territory embraced in the Stone Arabia patent, by Robert Wendell, jr., heir of Johannes Wendell, to Abraham Jacob Lansing, begins with these words: “This indenture made and concluded the 31 day of June in the 3 year of the reign of King George the third & of our Lord 1763, between Robert Wendell of Steene Arabia, in the county of Albany, in the province of New York, yeoman of the one part, and Abraham Jacob Lansingh of the same place, gentleman, of the other part.” The price paid for the land was “the sum of three hundred pounds currency money.” From the above tract was excepted a part which had been sold previously to Simon Van Antwerpe, but which was then owned by William Rogers.
The name Steene Arabia, or Stone Arabia, given to this land was bestowed most likely on account of the great quantity of coarse gravel and water-worn stones which were thickly embedded by deposition in its surface soil. It was perhaps, this peculiar condition of the land that induced Abraham Jacob Lansing to have a part of it surveyed and laid out into building lots in 1771.
Weise, A. J. History of the Seventeen Towns of Rensselaer County, from the Colonization of the Manor of Rensselaerwyck to the Present Time. Troy, NY: J. M. Francis & Tucker, 1880. 32.

1) A Clerk to be nominated by Abraham Jacob Lansingh for the Present meeting and for ever after to be chosen by the Committee and Majority of People of the Town and to be Inspected or even to be put out of the office for Ill conduct by the said Committee. — — —
The Fees of the said Clerk shall be stated by the Committee

[3ly] That the said Committee annually chosen shall have power to regulate the wood and commonable lands belonging to Borough of Stone Arabia to the Inhabitants of the said place. — —

[4ly] There shall be a Path Master to be chosen yearly by the Inhabitants of the said place to take care of the high ways and also to take a proper method to regulate the public highway to the Commons for the Benefit of the Inhabitants.

[5]ly That three fence viewers be chosen of said meeting and that no Inhabitants shall [review?] any Damages of his neighbor Excepting his fence be found not in Lawful Repair.

[6]ly No Hog shall run Common without being ringed or yoked.

[7]ly That no fish flesh or fowl that is [caught?] by [person?] shall let it lay in their [enclosure,?] highway or by the river side road to become a nuisance to inhabitants of the Town under the penalty of what the Committee shall think properly

Voted By the Inhabitants and [proprietors?] of the Town of Lansinghbourgh Thomas S. Diamond [(1737-1796)] town Clerk for the ensuing year
2
Voted Ebenezer Marvin [(1741-1820)] Moderator of this Meeting
3
Abraham J. Lansingh openly delivered up to the [said?] meeting before the Inhabitants and [proprietors?] [that?] he will in as short a time as possible that he [get?] his lawyer to draw the writings to give over his [power?] Right Title and Interest of the Commons belonging to the Town [?] of those farms already laid out.
4
Voted That in this meeting and all others meeting in [this?] place for ever hereafter, that all votes by the Majority of [Voices?] then present Members of said meeting for any purpose shall be voted + good
5
Voted Captain Abraham J. Lansingh his Heirs or successors for ever shall be one of the Committee
6
Isaac Bogart to be the first of the Committee
7
Voted John Barber to be the second of the Committee
8
Voted Ebenezer Marvin to be the third Committee
9
Voted Benjamin French to be the fourth Committee
10
Voted Abraham Wendell to be pathmaster for highways of this patent for the ensuing year
11
Voted That the General Map of the Town to be Lodged in the Clerk’s Office.

12th
Voted Robert Wendell Levinus Lansingh and Isaac VanArnum to be fence viewers for the ensuing year
13
Voted That the fence viewers shall be appraisers of all damages done by any creatures in said patent. 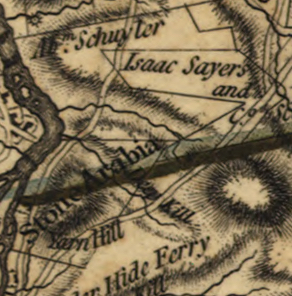 Detail showing Stone Arabia, “Yarn Hill,” Deep Kill, Isaac Sawyer’s Second Tract, etc. cropped from: Sauthier, Claude Joseph. “A map of the provinces of New-York and New-Yersey, with a part of Pennsylvania and the Province of Quebec.” (1777) https://www.loc.gov/item/74692644/ 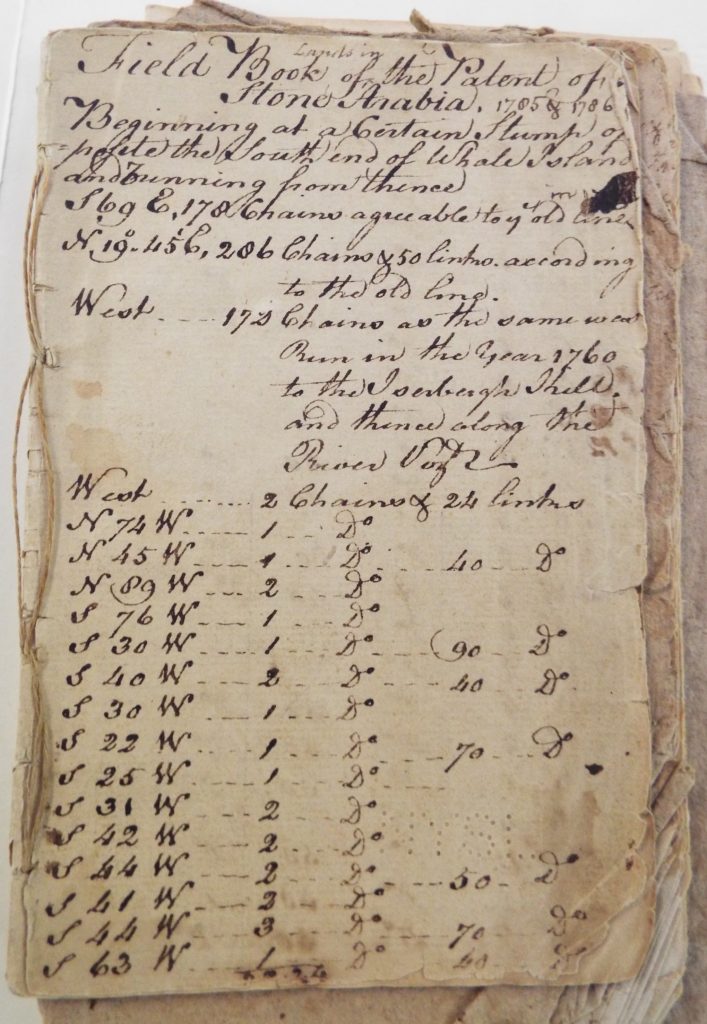 Field Book of ^Lands in the Patent of Stone Arabia, 1785 & 1786 Beginning at a Certain Stump opposite the south end of Whale Island 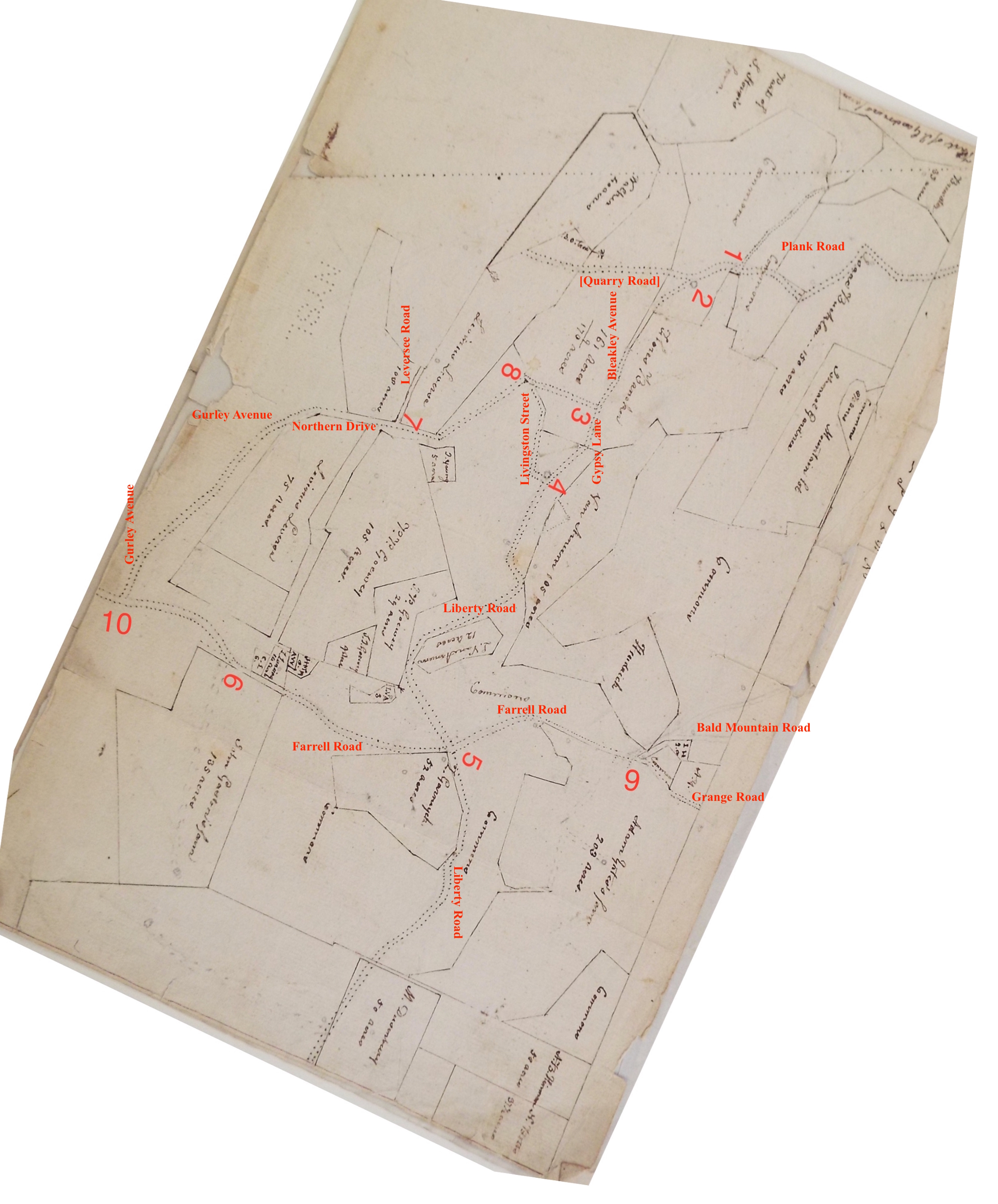 “Sketch of part of the town of Brunswick situate in the Patent of Stone Arabia.” ca. 1807.

Names on the ca. 1807 “Sketch of part of the town of Brunswick situate in the Patent of Stone Arabia” include: 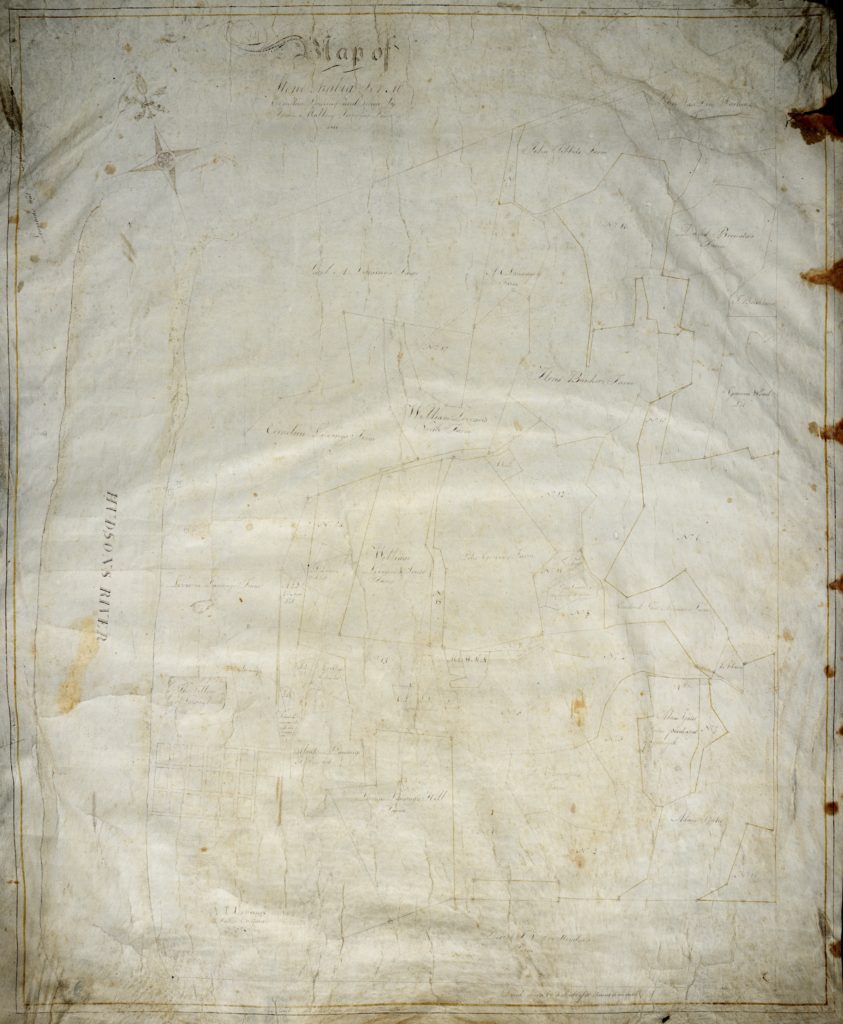 Map of Stone Arabia For Mr. Cornelius Lansing and others by James Mallery Surveyor June 27th 1816. Cropped and reduced in size from scan by New York State Library Manuscripts and Special Collections.

Of the above names: Betts, Brewster, Bucklin, Dusenbury, Gardinier, Goewey, Lansing, Leversee, Van Arnum, and Vanderheyden all appear in the same overall former Stone Arabia area on the 1854 and 1861 maps of Rensselaer County in the towns of Lansingburgh and Brunswick. 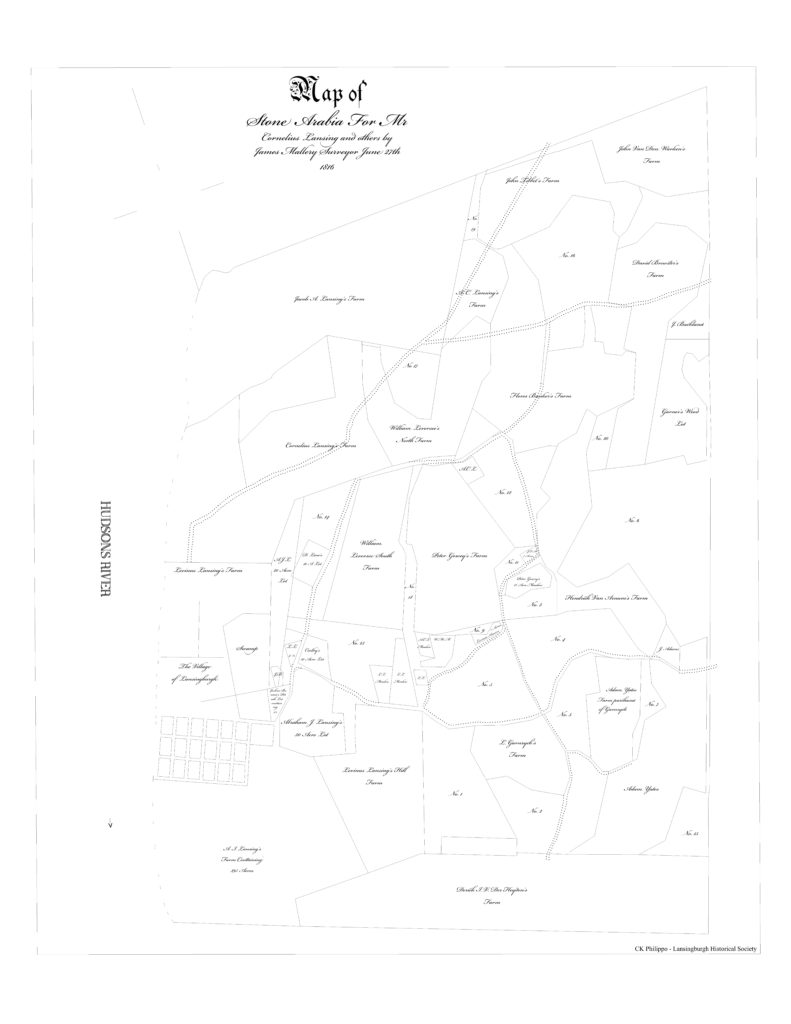 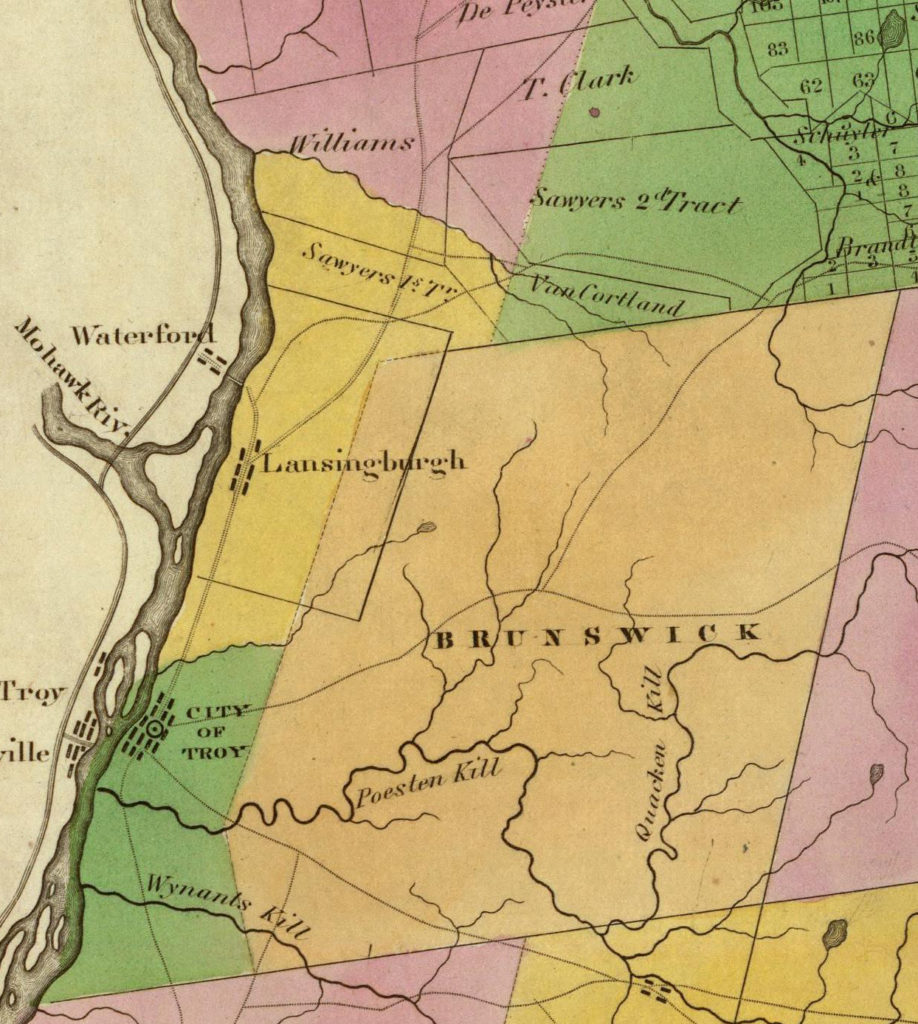 Detail showing the rectangular boundaries of Stone Arabia over the boundaries of the Town of Lansingburgh (in yellow) and Town of Brunswick (in tan), and former tracts of Sawyer, Williams, and Van Cortland cropped from: An atlas of the State of New York NY, David H. Burr. 1829. 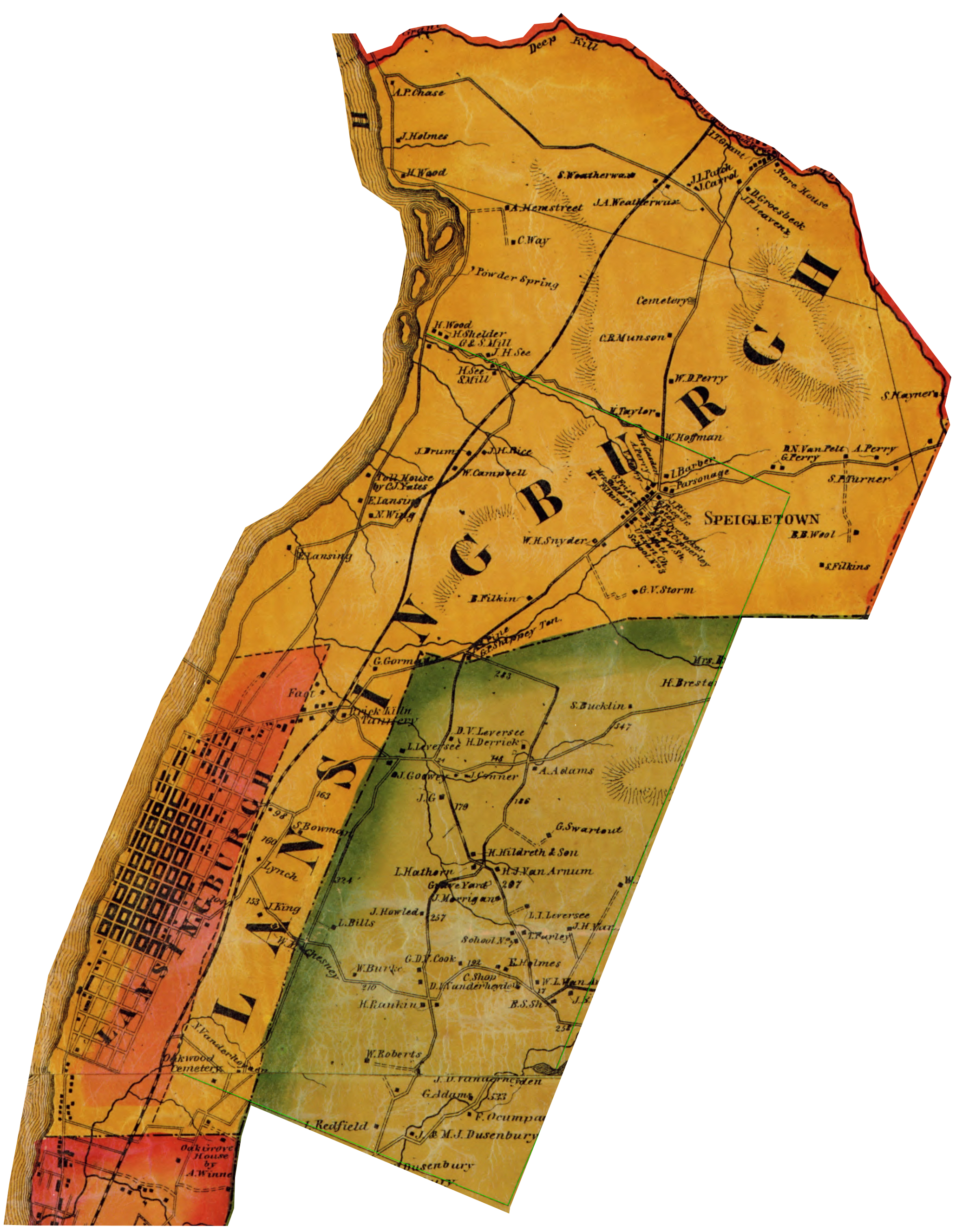 There is a Stone Arabia Drive in the Town of Brunswick southwest of the junction of Liberty Road and North Lake Avenue. The location, from how Stone Arabia was georeferenced on the 1861 map, would actually seem to place it outside of the former Patent of Stone Arabia though perhaps by only 500 feet or so.