The appearance of the village as a formal unit of local government began in the 1790’s. Villages were created by special acts of State Legislature, but the starting date for this process is in dispute among historians due to a lack of precision in terminology in those early legislative acts. In 1790, the Legislature granted specific powers to the trustees of “… part of the town of Rensselaerwyck, commonly called Lansingburgh.” The term “village” first appeared in state law in a 1794 enactment incorporating Waterford [sic]. The legislative act of 1798, providing for the incorporation of Lansingburgh and Troy as villages, is seen by many historians as the first formal authorization in the state for the village form of government. This enactment included all of the legal elements (including an incorporation clause and delegation of taxing and regulatory power) deemed necessary for a true unit of local government.
New York State Department of State. Local Government Handbook. 6th Ed. 2011. 67-68. https://www.dos.ny.gov/lg/publications/Local_Government_Handbook.pdf

The term “village” actually appeared earlier than 1794, e.g. in Law 1793, chapter 10, “An ACT for building a Court-House and Gaol in the County of Rensselaer”, referred to “the village of Troy, in the town of Troy” and Law 1793, chapter 33 “An ACT relative to the Church in Johnstown” referred to “the village of Johnstown, in the town of Caughnawaga, in the county of Montgomery”

CHAP. 49.
AN ACT to appoint trustees to take and hold certain lands therein mentioned, and for other purposes. 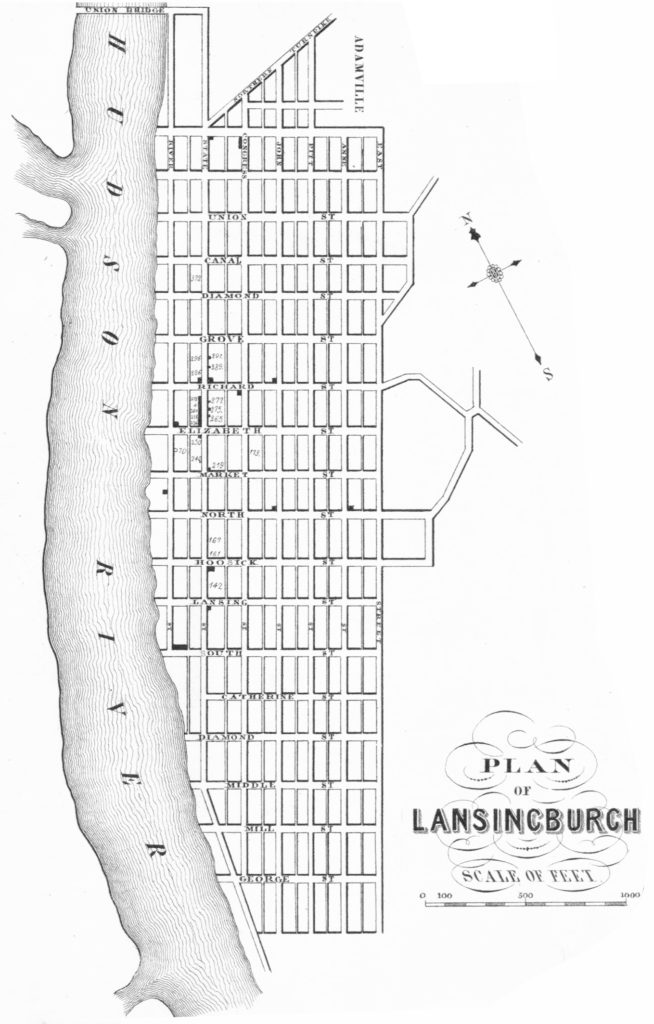 Image of Village of Lansingburgh cropped from 1861 Map of Rensselaer County.

Consideration of Bills.
President Skillman and Messrs. Roemer, Chapman, Bolton, Gray, McCrea and Gillespie were present. The President announced that it was an adjourned special meeting. Mr. Bolton of the law committee reported on the bill of contractor Thomas H. Karr for $223.73 for extra work on the Fifth Avenue pavement, and on his motion the sum of $46.73 was ordered paid to Mr. Karr, and the question of auditing the remainder of the amount was referred to the Water Commissioners. It was claimed that the remaining sum was due for water used during the contract. Contractor Karr rose a little later and asked why his whole claim had not been audited. He said that the Board was responsible for all extra work done by him on the contract, and he asserted that Engineer Roemer had directed him to do the work charged for. Engineer Roemer stated that the inspector had been instructed to keep an account of all extra work, and the matter was not further considered.
The bill of Dr. George L. Johnson for $97 caused considerable discussion. Eugene L. Demers, who presented the bill to the Board, was given the privilege of the floor to explain it. He said the bill was contracted during the diphtheria quarantine in 1899, and had been sent from Board to Board, and each in turn had refused to pay. He presented affidavits as to the correctness of the bill, but Mr. Gray questioned the legality of paying it, as no orders were produced. On motion the bill was referred to the law committee, which practically kills it. The bill of Dr. Rich for $1.25 for vital statistics was audited.

The Fire Department.
The report of the Fire Commissioners was presented by Secretary C. M. Clark, as follows:

The Police.
The report of Police Commissioner Magee recited the charges against officers during the year and the litigation in the janitor case. He reported that $13,647.72 had been expended during the year, of which $352.28 was applied largely on account of the new police station. Bills to the amount of $433.73 remain to be paid by the city of Troy.

Cannon For the Park.
President Skillman reported that the mortar to be placed in the village park had arrived, and another cannon, weighing 7,200 pounds, had been secured. A resolution was adopted on motion of Mr. Gray that the sum of $150, or as much therefore as is required, be expended by President Skillman and Mr. Bolton, as a committee, to pay for transportation of the guns to Lansingburgh and placing them in position on suitable foundations in the village park between Thirteenth [113th] and Fourteenth [114th] Streets, and an audit was ordered drawn to them for the amount. On motion Clerk Miter was empowered to reindex the books and papers of the village at an expense not to exceed $100, the same to be done under the direction of the authorities of Troy.
On motion of Mr. Roemer the Clerk was instructed to have printed the reports received during the meeting and 250 copies distributed to officials and taxpayers. The minutes of the meeting were approved and the Board adjourned sine die.
“Upper Troy.” Troy Daily Times. January 2, 1901: 4 col 3.

• Annexation to the City of Troy