—The Freihofer Company of Philadelphia, which will build and run a biscuit manufacturing plant immediately north of the Riverside Club, is having the plans for the building drawn up by a Philadelphia architect. A Troy contractor will be given the contract for the construction work.
“Lansingburgh.” Troy Times. June 8, 1911: 3 col 3.

—The owner of the new $40,000 bakery which is under construction on [One Hundred] Twenty-seventh Street, Mr. Freihofer, has purchased the residence on the corner of Twenty-third Street and Sixth Avenue, where he will make his home.
“Lansingburgh.” Troy Times. July 23, 1912: 6 col 2.

A Pleasant Farewell.
A pleasant evening was enjoyed last night by about twelve of the friends of John Carne, who assembled at the home of Mrs. J. E. Snover, 703 Second Avenue, to bid him farewell. Mr. Carne is a constructing superintendent for The American Cement Company and has been living in this section for about six months now, while superintending the concrete work on the Freihofer bakery. Mr. Carne will return to Philadelphia, Penn., and will later sail to Ireland, where he will visit relatives. During his short stay in the section Mr. Carne has made many friends, who will miss him greatly.
“Lansingburgh.” Troy Times. September 11, 1912: 5 col 3.
LANSINGBURGH.
—
A Mammoth Bakeshop […]
The new Freihofer bakery is being rushed to completion, and it will not be many weeks before the mammoth industry will be in full swing. All of the exterior construction work has been completed. A feature of the new plant will be the large windows which give an unobstructed view of the interior and will allow the curious to view the processes of manufacture from the outside. The big windows on the east side will also serve to let in the sunlight, and the bakery when completed can well earn the title of “the sunlight bakery.” The north building, where are four mammoth ovens, now only lacks the tiling.

Intricate Machinery.
The intricate machinery was being installed to-day. The complexity of the machinery in this model bakeshop will be a curiosity. It is stated that even the boxes for the shipment of the goods will be filled by machine and nailed in the same process. In the central bread-baking shop will be the mammoth continuous baking ovens. The unbaked pastry will be placed in one end of the ovens on rolling trays, and will come out on the other side, accurately timed, ready for shipment. Two Babcock & Wilcox boilers, standing twelve feet high and containing tubes fifteen feet in length, were being installed to-day.
Troy Times. November 9, 1912: 2 col 2.

The Freihofer bakery at Lansingburg is completed. The switchboard and electrical apparatus and the machinery for the baking plant are all installed. Fifteen delivery wagons arrived from Philadelphia.
The National Baker 18(205). February 1913. 48 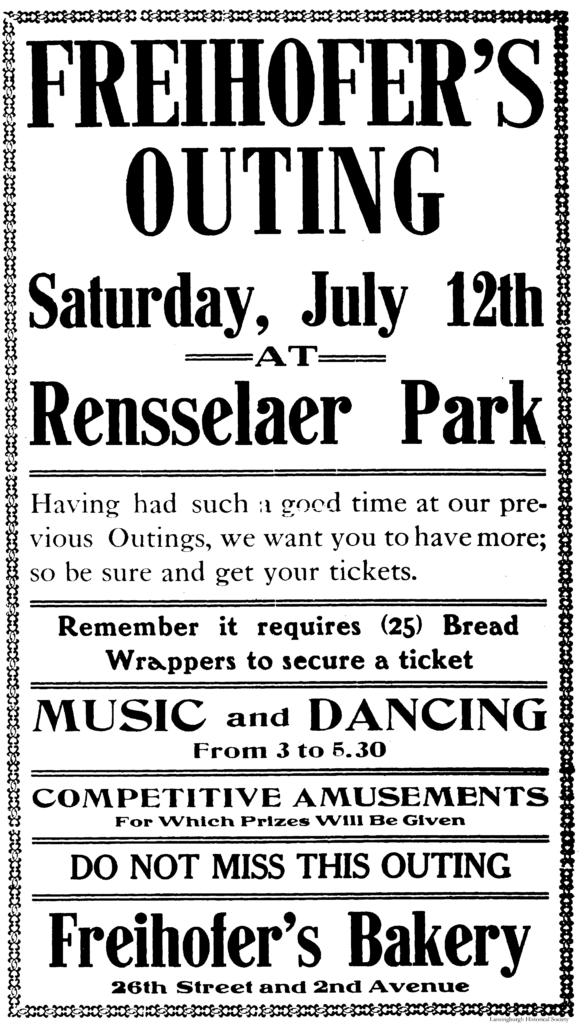 LANSINGBURGH.
—
A Big Truck.
A Pierce-Arrow motor truck of enormous capacity has been purchased by The Freihofer Baking Company and is now in use delivering bread. It will carry more than 9,000 loaves.
Troy Times. September 22, 1913: 8 col 6.

—Nicholas & MacLoughlin have sold for John G. MacMurray two lots on the east side of Second Avenue, Lansingburgh, north of Twenty-fifth Street, to The Freihofer Baking Company, which will erect buildings to be occupied in connection with that bakery business.
“City Notes.” Troy Times. May 4, 1914: 5 col 1.

—Work was started this week on an addition to the Freihofer Bakery in the form of a new barn and blacksmith shop. The extension is in the rear of the bakery along the river front.
“Lansingburgh.” Troy Times. September 10, 1914: 6 col 3.

Bread Beat Milk.
A baseball game between The Charles Freihofer Baking Company and The Borden Milk Company’s employees yesterday afternoon on the Sixteenth Street groundsresulted in a victory for the Freihofer team, 8-6. The game was well contested and was witnessed by a large crowd, a number of whom were employees of the plants. Parker for the Freihofers and Wiltsey for the Bordens played the best game. Charles Adams of the High School was the umpire.
“Lansingburgh.” Troy Times. May 28, 1915: 2 col 1. 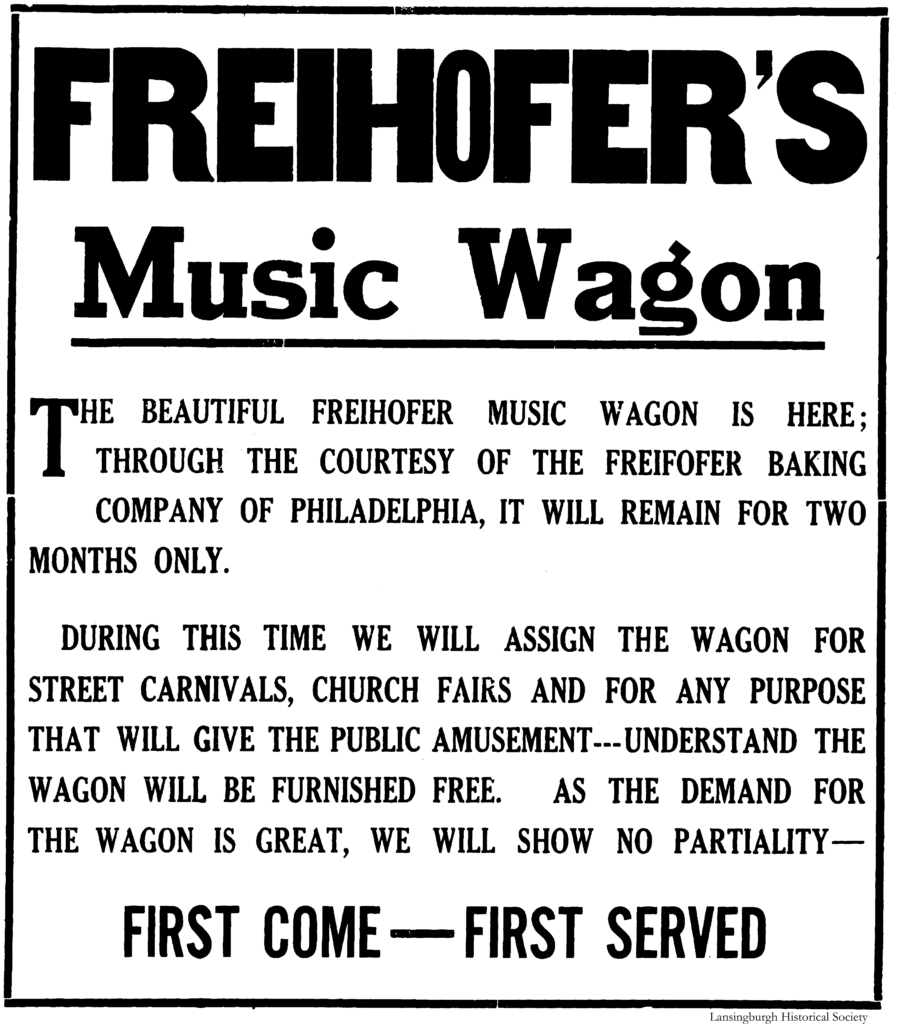 Democratic Outing.
The Sixteenth Ward Democratic Club will meet to-night at the store of Wheeler Wilson, on [One Hundred] Twelfth Street, and complete arrangements for the outing Saturday to Bolton’s Stock Farm. Freihofer’s wagon will give a concert at the outing. A number of city officials have been invited and their acceptance is expected to be received to-night.
“Lansingburgh.” Troy Times. August 26, 1915: 2 col 3.
Neighborhood Outing Postponed.
The neighborhood outing of the [One Hundred] Twelfth Street playgrounds, scheduled for to-night, has been postponed owing to the weather. The event will be held Saturday and the full program will be carried out. This includes a concert by the Freihofer music wagon and dancing on the baseball grounds.
“Lansingburgh.” Troy Times. August 30, 1915: 2 col 3. 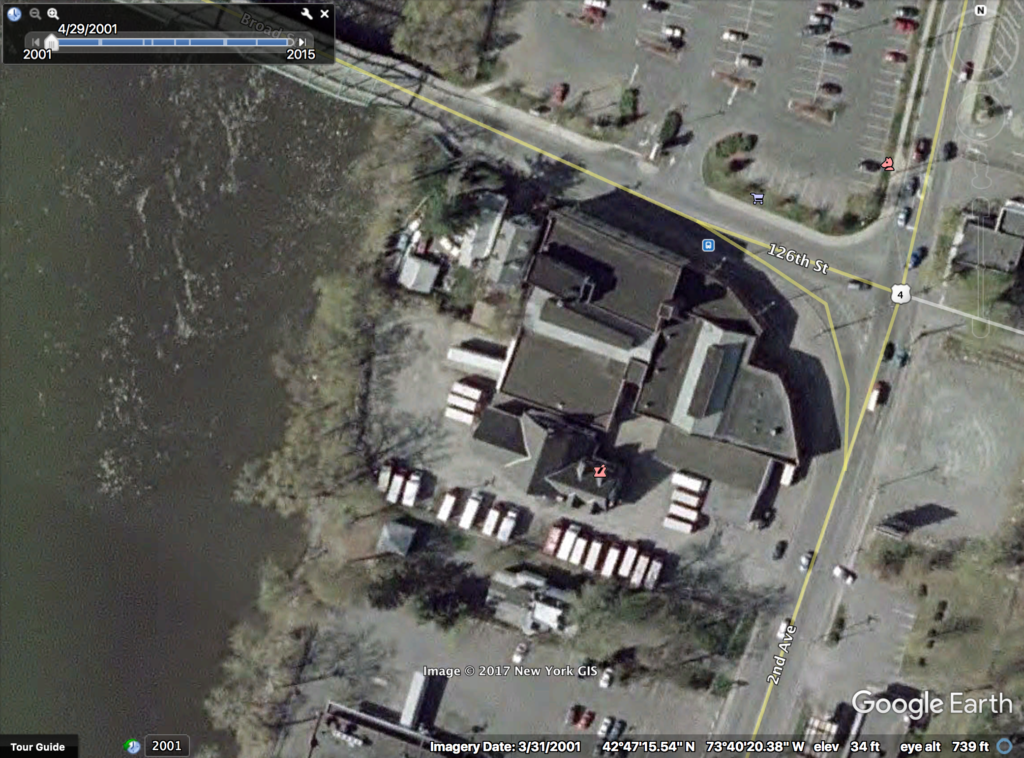 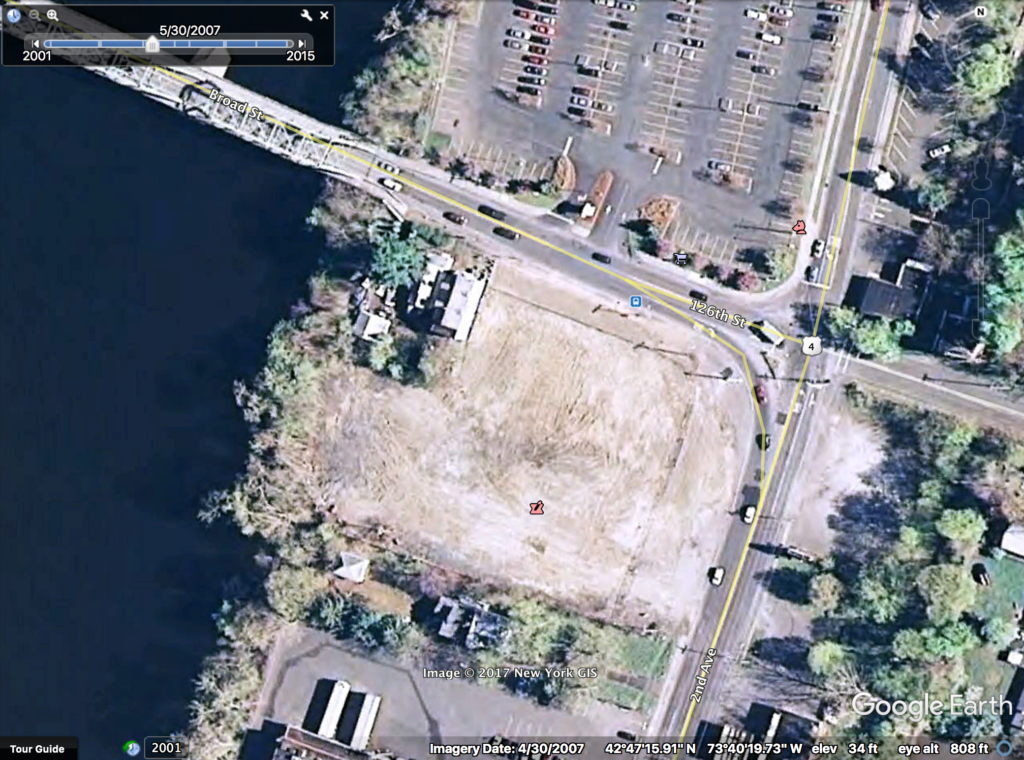