Fane’s Grove was an area for societies’ outdoor events during at least the 1920s-1930s at Martin Fane’s farm on Oil Mill Hill evidently northeast of the intersection of Northern Drive and Leversee Road. There is now a Fane Court one block east of Leversee Road, described as a “new development” in 1950.

Clambake and Steam.
Sunday afternoon, August 26, on the Martin Fane farm near the Reservoir, the Danish Society, known as the Saturday Evening Club, will entertain their friends and members by giving a clambake and steam.
“Lansingburgh.” Troy Times. August 22, 1923: 2 col 3.

LUTHERAN BROTHERHOOD
—
Second Annual Picnic and Outing Scheduled for Next Saturday Afternoon.
Elaborate preparations are under way for the second annual picnic and outing of the Lutheran Brotherhood of Troy and vicinity to be held next Saturday afternoon at Fane’s Grove on Oil Mill Hill. For those who have no automobile accommodations buses will leave at the end of the Troy Fifth Avenue bus line at 2, 3 and 4 o’clock for the grove. Anthony Larsen, Jr., has planned a varied program of sports, including a baseball game between the married and single men and numerous field events and stunts of general amusement. Reservations show that more than 200 members of the Brotherhood and their wives, in addition to several members of the Gilead Lutheran Church Brotherhood at Center Brunswick will be present and a jolly time is anticipated.
Assisting Mrs. Larsen in arrangements are the following: From the English Lutheran Church of the Redeemer, Ole Backer; from Emmanuel Danish Lutheran Church, Harold Tofte and Andrew Nielsen; from Our Savior’s Lutheran Church, Ole Michelsen and Edward Hyldelund; from the First English Lutheran Church, Fred Barth and E. J. Smith, and from Trinity Lutheran Church, Carl Fritz.
“Lansingburgh.” Troy Times. July 20, 1925: 3 cols 1-2. 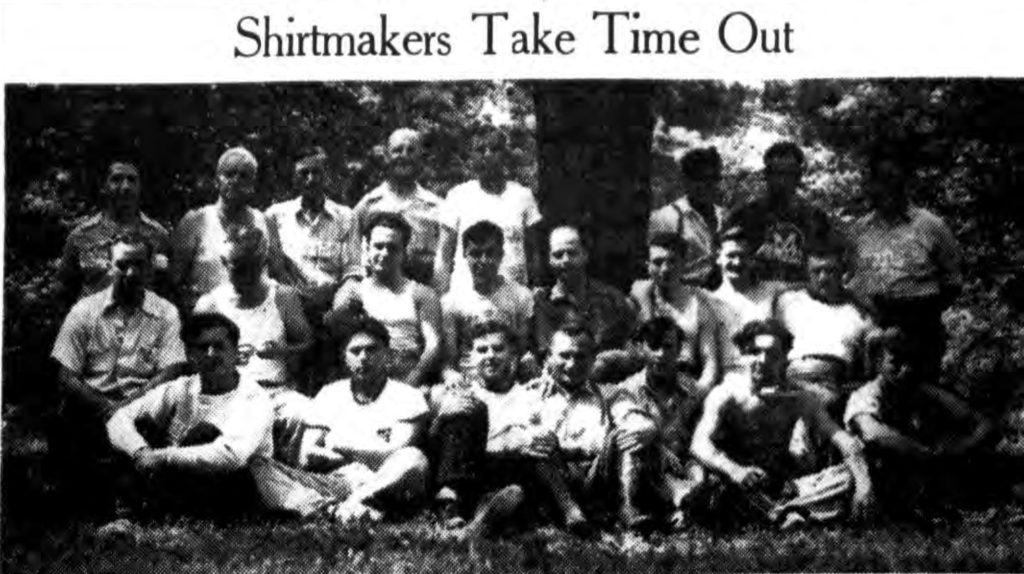 The cutting department of the N. & S. Shirt Co., on their annual clamsteam at Fane’s Grove, take time out for a pose for the photographer. A baseball game between the married and single men was the main attraction of the sports program with clam-shelling, clam-eating, horseshoes and wrestling as side events. The outing was held Saturday.
Times Record. August 31, 1939: 14 cols 2-4.