In 1945 a National Cemetery for veterans was proposed for the Troy area. Land east of Oakwood Avenue and south of the Plank Road was specifically suggested, land in the Town of Brunswick that had been part of the Patent of Stone Arabia from which the Village of Lansingburgh had been formed.

Troy newspaper coverage for the proposal in 1945 exceeded even the newspaper coverage surrounding the actual creation of Oakwood Cemetery and the Earl Gardner Chapel – in the neighborhood of fifty articles, and at least one banner headline.

VETERANS SEEKING CEMETERY TO BE ESTABLISHED HERE
—
Trojan Post, Veterans of Foreign Wards, Asks Congressmen’s Aid.
The first step in gaining for Troy the national cemetery proposed for upstate New York was taken last night at a meeting of Trojan Post, Veterans of Foreign Wars, with the appointment of a committee to inaugurate a program designed for this purpose.
The committee will confer with Congressman Dean P. Taylor of Troy, representing the 33rd District and William T. Byrne of Loudonville, representing the 32nd District, Sunday when the two legislators come to Troy for the Congressional Medal of Honor ceremonies.
Preliminary plans for the campaign were outlined at last night’s meeting.
The committee will seek the endorsement of other veterans’ organizations of the city Friday evening when it will present its proposal at the meeting of the Joint Veterans Memorial Day Committee at the Rensselaer County Court House.
Earlier plans for the national cemetery, one of many to be constructed by the federal government throughout the nation under recently announced plans, called for a site other than Troy. Later developments have made it possible to seek the cemetery for this city.
Frank J. Mealy was named chairman of the committee, to be assisted by John J. Tower, Joseph R. Douglass and John J. Dougherty.
Delegations from the post and its auxiliary will represent the organization at the medal award ceremonies Sunday, it was announced last night.
The post will conduct its annual poppy day dale Friday and Saturday in the city. Headquarters for the sale, which will be handled by post members, assisted by the auxiliary, will be the Elkan Building on Fulton Street. Proceeds from the sale will be used to help hospitalized veterans.
Four veterans of overseas service were received into membership at last night’s meeting, presided over by Thomas L. McGovern, commander. They were: Richard M. Phillips, John A. Clement, Joseph F. Martin, and Charles W. Phillips.
Reports were received on progress being made in preparations for the 25th anniversary dinner of the post, to be held in June at the Surf Room of the Annex.
Times Record. May 23, 1945: 15 col 1.

Efforts remained fairly steady into 1949, even as newspaper column inches devoted to it declined.

The last interest shown in the proposal seems to have been in late 1958, during which time some of the people involved with it began to seek national recognition of Troy’s Samuel Wilson as “Uncle Sam.” In that lesser effort they were more successful, obtaining recognition from Congress in 1961 (despite the lack of direct evidence).

West Sand Lake VFW Asks For ‘Uncle Sam’ Cemetery.
Lt. Perry Williams Post, VFW, West Sand Lake, has renewed its efforts for the establishment of a national cemetery in Rensselaer County and has asked that such a site be called the “Uncle Sam National Cemetery,” honoring the Troy man whose name has now become synonymous with the nation.
A resolution passed by the post calling for such action has been forwarded to the Hudson-Mohawk Counties Council and the VFW State Department.
The post cited the veteran population of 23 million in the United States and renewed its stand for the national cemetery site in this county. It pointed to the geographic advantages and its natural beauty of the area, along with its “rich historic background.”
“The County of Rensselaer is nationally known as the birthplace of ‘Uncle Sam’ and has in addition a historic background beginning in Revolutionary War days which background is unsurpassed by any county of its size and population in the nation,” the resolution said.
The resolution that “the Hudson-Mohawk Counties Council and the Department of New York, VFW, be petitioned to endorse the establishment of a national cemetery in the County of Rensselaer to be named ‘Uncle Sam National Cemetery’ and proper action be taken by the department to solicit the endorsement of the national headquarters of the VFW to endorse and support this resolution.”
Times Record. October 27, 1958: 2

The printed 1945 proposal Troy, New York The Birthplace of Uncle Sam Its Proposal for a National Cemetery included many endorsements for the plan, and some sections aimed at convincing the federal government to adopt the plan. Hilda Goodwin’s “Historical Background of Troy, N. Y.” noted some of Lansingburgh’s history, that “citizens have always been conscious of their duty to the nation as a whole. An early indication of this spirit is shown in a declaration of independence written by the people of Lansingburgh, now an incorporated part of the City of Troy, and dated May 22, 1775.” After quoting a portion of the declaration, Goodwin noted “This declaration is an indication of the spirit which has always pervaded this area. The men who signed it proved their patriotism by serving with the militia in the Revolution.” 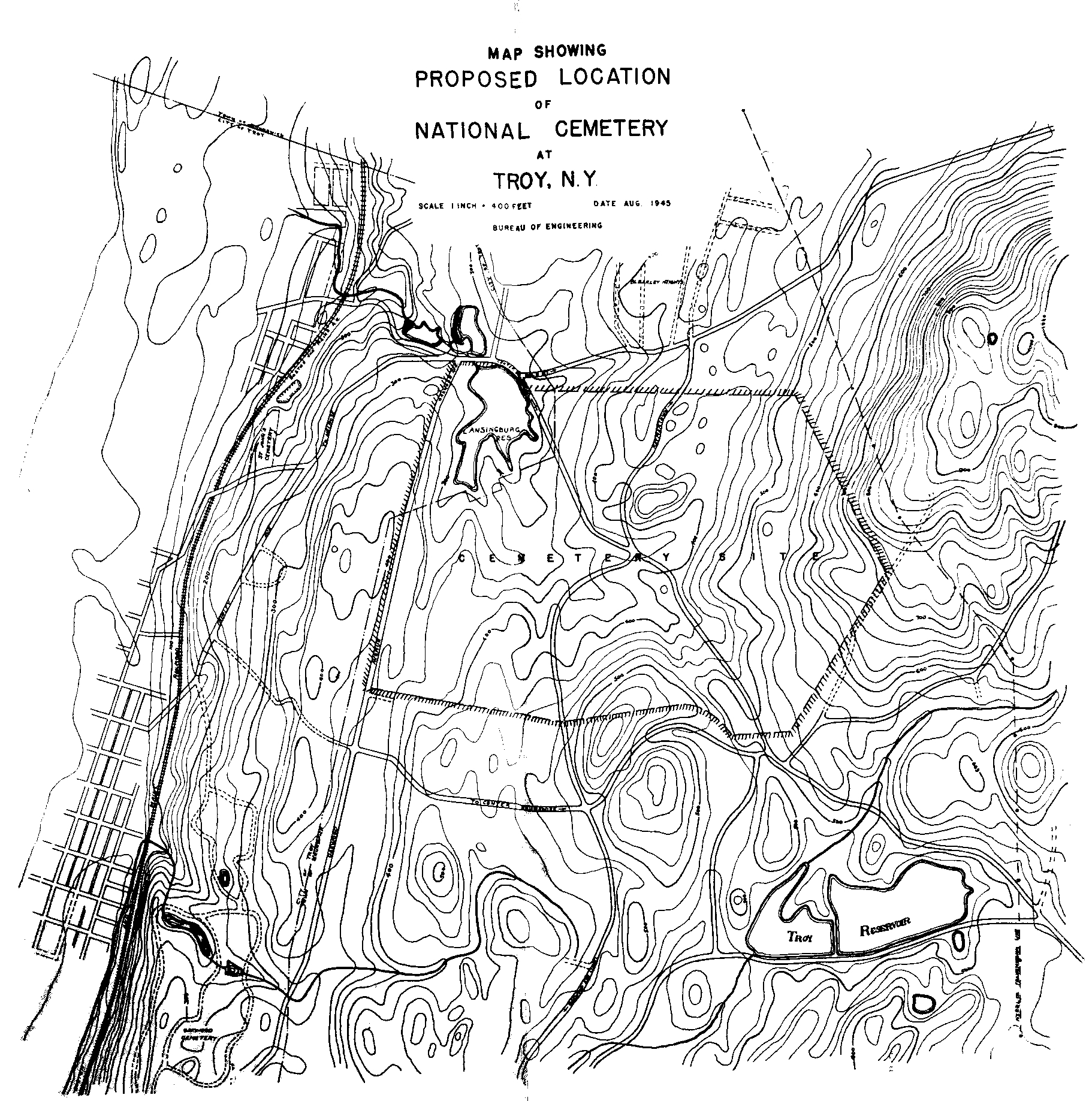 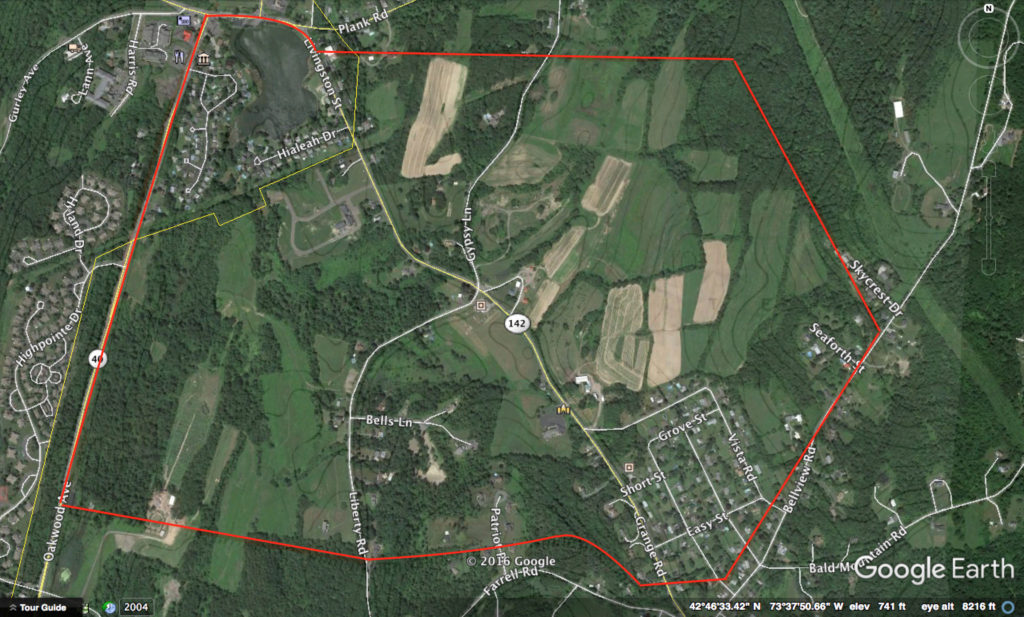