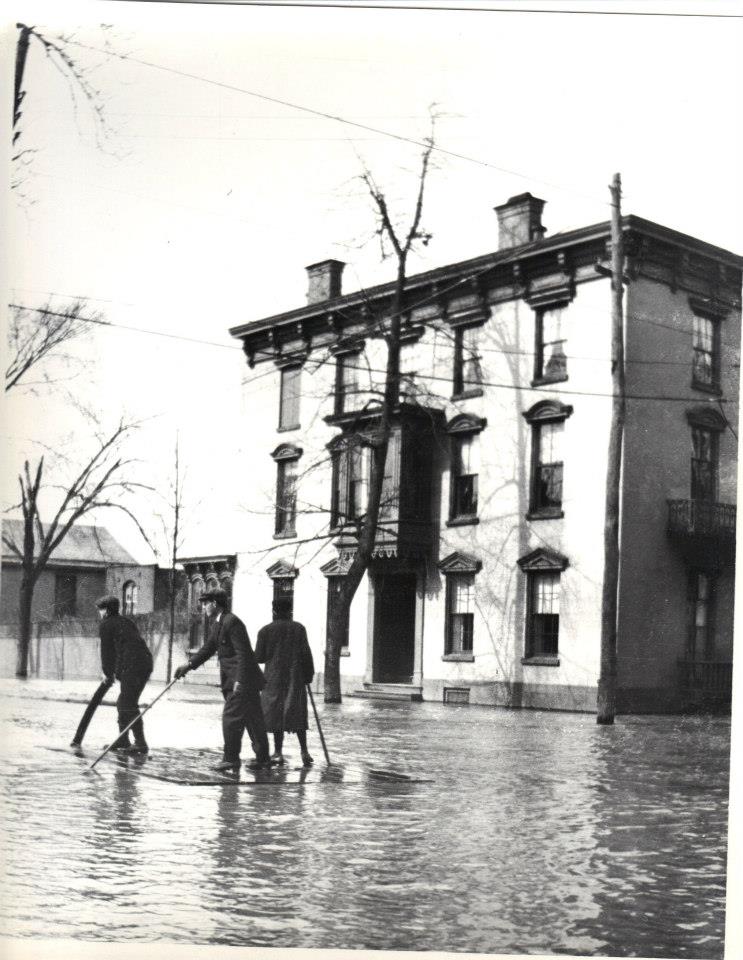 Cellar Vault Deluged.
The cellar vault at the People’s Bank, containing hundreds of valuable books and records, was flooded during the deluge. The books are being dried out.

—
Surprised With Dinner.
The corps of workers engaged in an all-day after-flood clean-up at The United Shirt and Collar Company’s plant last evening were treated to a surprise.

—
Slime in Lodgers’ Room.
There are just two feet of muck in the lodgers’ room in the basement of the Fourth Precinct. The cleanup was started this morning at the same time that the fire was started in the boiler. It will take about a week to clean up. […]

—
General Mention. […]
—The Beacon Electric Company was able to supply power for other than the street lighting circuits this morning for the first time since the river became unruly. The power was turned on at 10:30 o’clock.
“Lansingburgh.” Troy Times. April 1, 1913: 6 col 1.
For Flood Sufferers.
The collection for the flood sufferers taken during the union service at the First Methodist Church Sunday morning amounted to $62. […]

—
General Mention. […]
—John Olesen’s boat Seneca, which disappeared Friday [March 28th] was located to-day at the First Precinct.
—The Lansingburgh High School said that boats used during the flood o’clock at the Riverside Club. [sic].
—Police Captain O’Brien this morning returned the boats used during the flood and other debris should be removed at once.
“Lansingburgh.” Troy Times. April 2, 1913: 6 col 1.
A Temporary Boat Haven.
The vicinity of the First Precinct resembles a boathouse since the flood. There are about sixteen rowboats of all descriptions and sizes. Captain Keenehan is rapidly finding owners. Yesterday Sergeant Flynn took back his boat to Lansingburgh. It was among the first to be pressed into service during the rising waters.
“Home Matters.” Troy Times. April 3, 1913: 8 col 4.
Night School Resumes.
Night-school sessions at the High School and Powers School will be resumed to-night, following a flood intermission. The session will end this week.
“Lansingburgh.” Troy Times. April 7, 1913: 6 col 2.
General Mention. […]
—[One Hundred] Fifteenth Street has been opened for traffic. Six loads of gravel were used in filling in the several depressions.
“Lansingburgh” Troy Times. April 7, 1913: 6 col 2.
Health Inspection.
Representatives of the Department of Health this morning started an afternoon inspection of Lansingburgh. Every resident in the water affected section was requested to start an immediate clean-up. It was stated that the office was prepared to supply disinfectant wherever it was deemed necessary to use it.
“Lansingburgh.” Troy Times. April 10, 1913: 6 col 2.
Becoming Normal.
Street conditions in Lansingburgh are becoming normal. Although the Department of Public Works, because of the pressure of necessity, postponed the immediate cleanup, most of the work has now been accomplished and the red lights are no longer needed at night. Catchbasins still need cleaning. This morning the catchbasin at the corner of [One Hundred] Fourteenth Street and Second Avenue overflowed. In several places on Second Avenue the between-track catches are clogged and the lower pavement between the rails is flooded with water.
“Lansingburgh.” Troy Times. April 11, 1913: 6 col 2.