March 30, 1847 – Omoo: A Narrative of Adventures in the South Seas first published (in UK)

May 1, 1847 – Omoo: A Narrative of Adventures in the South Seas first published (in US)

“OMOO: A Narrative of Adventures in the South Seas.”—P. BLISS has laid upon our table a very interesting work bearing the above title, in two parts, of about two hundred page each, written by HERMAN MELVILLE, author of “Typee.” This work gives a graphic narrative of the adventures of the author in the South Sea Islands, and it can but interest every class of readers. Those who perused the pages of “Typee,” will, of course, call at the Lansingburgh Bookstore, and procure “Omoo,” without delay; and those who have not enjoyed this highly interesting repast, cannot truly say they have participated in the richest luxuries of the age. Harper & Brothers, Publishers. Price 50cts each part.

NEW BOOKS.—OMOO: A narrative of adventures in the South Seas, by H. Melville, author of “Typee.” […]

for sale at the Lansingburgh Bookstore by PELATIAH BLISS.

Omoo: a Narrative of Adventures in the South Seas, by Herman Melville, author of Typee; cloth, 10s; paper, 8s […]

YANKEE DOODLE has the pleasure of announcing the receipt of the following papers from the distinguished persons whose names they bear. He regrets that he cannot promise to lay them before his readers, as they were merely submitted to him for his judgment upon their merits. The writers express their perfect consciousness that they could not choose so good a medium for the diffusion of their sentiments as YANKEE DOODLE’S own columns, and are deterred from so doing, only because they fear that it might be supposed that they intended some jest or satire, when the fact is that they are perfectly serious.

Omboog, or three months residence in the Moon. HERMAN MELVILLE

“Thoughts on Mediocrity.” Such was the commencement of a critique we intend to write on Omoo!

“Thoughts on Mediocrity” would seem to come from:

The above piece in The Knickerbocker was popular enough to have received more than a few reprints, e.g.:

April 1847-March 1848 – excerpts from Omoo appear in several newspapers, including: 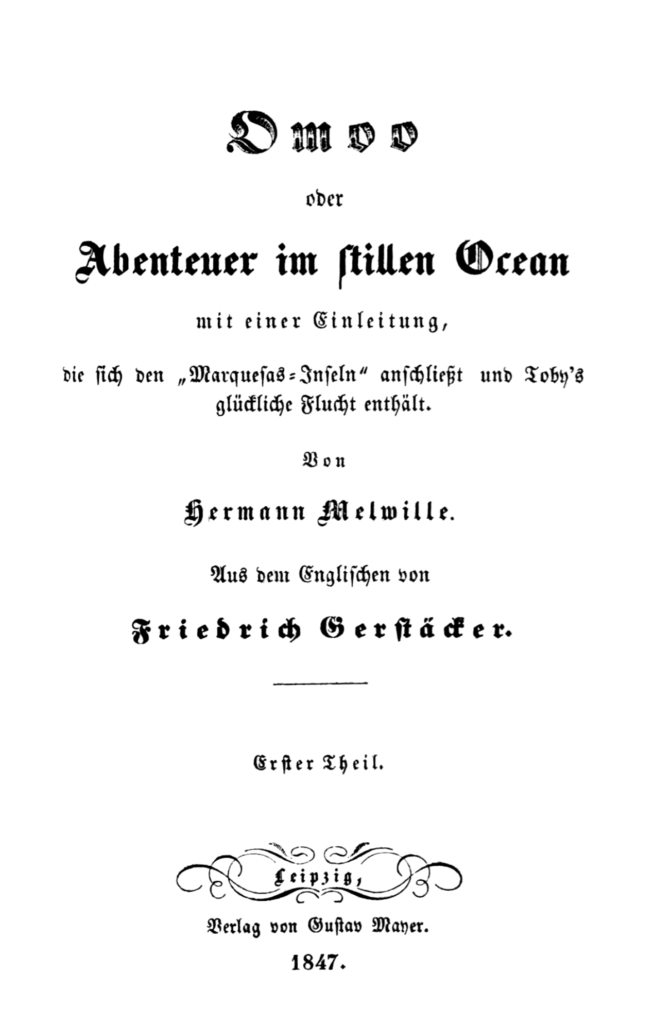 Cover of the second book of the 1847 German edition of Omoo. [Cropped and edited from scan by Google Books.]