During the existence of the Town of Lansingburgh, Thieves Hollow formed part of North Lansingburgh from at least 1819 (when part of the Town of Schaghticoke south of the Deep Kill was annexed) to 1901. It’s also been called Thief Hollow or Thief’s Hollow. 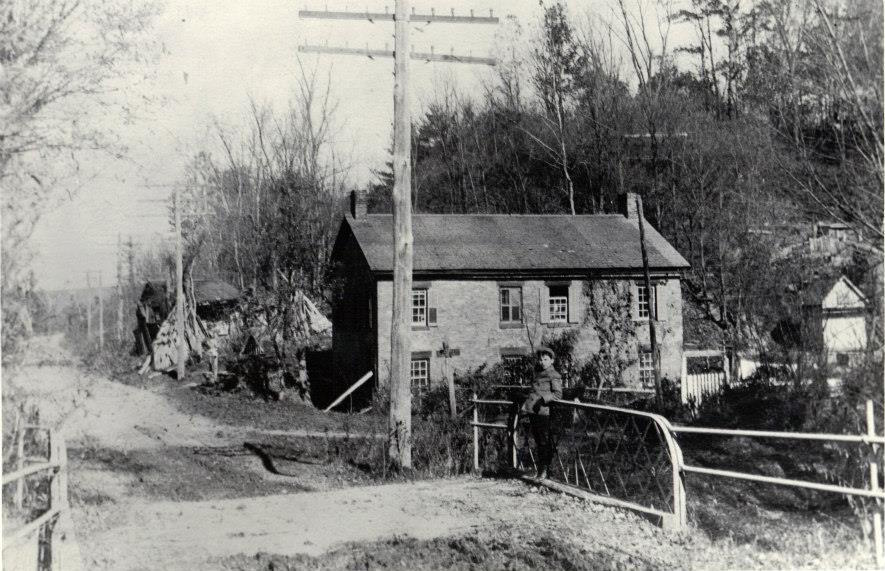 ☞ WATERFORD.—Mr. Alfred Sexton has been appointed to succeed Mr. Bonce as toll gatherer at the Union Bridge, and will enter upon his duties the first of March. Mr. S. has been sixteen years connected with Mr. Titcomb’s distillery. Mr. Bonce will continue the manufacturing business, at a place called “Thief Hollow,” about two miles up the river, on the east side. He had charge of the bridge for twenty-two years. Considerable reduction has been made on the rates of toll, which have been generally regarded as oppressively high. After the first of March, but ten cents will be charged for a single wagon or sleigh, and thirteen cents for all two-horse conveyances.—Mr. Titcomb’s distillery stopped running on Wednesday last, the government tax rendering further manufacture profitless. Mr. Titcomb has paid to the government, while running under the late revenue act, more money than the whole county besides.
Troy Daily Whig. February 29, 1866: 3 col 2.

CORONERS’ INQUEST.—An inquest was held at the office of C. J. Lansing, in this village, on Saturday and Monday evenings, April 18th and 20th, over the remains of an infant child, found partially buried on the premises owned by John H. See, and occupied by one Wolf, in the northern part of the town, in the locality known as “Thief’s Hollow.”
Lansingburgh Gazette. April 23, 1868: 3 col 3.

—Justice Davenport issued a warrant for the arrest of Mrs. Wolf of “Thief Hollow,” yesterday, charging her with “barring out” persons from her property. Constable Clark will go after her to-day.
“Lansingburgh.” Troy Daily Times. June 9, 1876: 3 col 4.

—Constable Clark undertook to arrest Mrs. Wolf of “Thief Hollow” Saturday, when she made a stout resistance, drawing a flat-iron and fighting her way out of the reach of the officer. He wisely beat a hast retreat.
“Lansingburgh.” Troy Daily Times. June 12, 1876: 2 col 5.

—Constable Thomas R. Clark captured the long sought for and much desired Mrs. Wolf Monday. He brought her from somewhere near Thieves’ Hollow to Justice Davenport’s office, where she was so violent as to make 24 hours’ residence in jail necessary.
“Village Notes.” Lansingburgh Courier. July 14, 1876: 3 col 1.

Warrants have been issued for the arrest of a number of persons for misdemeanors Sunday near Thief’s Hollow.
“Lansingburgh.” Troy Daily Times. July 22, 1885: 3 col 5.

The board of health yesterday visited the boiling establishment at Thief’s hollow. The place is complained of by neighbors as a nuisance.
“Lansingburgh.” Troy Daily Times. September 4, 1886: 2 col 5.

A Suicide’s Body Identified.
Saturday evening the body of the man found in the river Friday at Thieves’ hollow, above Lansingburgh, was identified as that of John McDowell of Schaghticoke, who committed suicide several weeks ago while suffering from delirium tremens. Coroner Cummings directed Undertaker Wall of Lansingburgh to inter the remains in the village cemetery. An inquest will be held to-morrow afternoon.
Troy Daily Times. May 23, 1887: 3 col 4.

A vicious dog owned by Godfrey Keyser, residing at Thief Hollow, attacked a Hebrew peddler Tuesday and lacerated one of the latter’s legs in a shocking manner. A warrant for the brute’s execution was issued by Police Justice Smith. This is the same dog that attacked John A. Stover the underwriter last winter and nearly ruined a valuable overcoat for him. Complaints are also made by Keyser’s neighbors that he keeps still another dog more vicious than the one in question, and Justice Smith instructed the complainants to shoot the vicious animal on sight.
“Notes About Town.” Lansingburgh Courier. June 18, 1887: 3 col 2.

Rensselaer County Rambles.
—
No. 17—Thieves’ Hollow.
BY HI TRAYLES.
Written for The Troy Times.
For one in search of nearby short interesting walks during this winter season of brief afternoons no better choice can be made than the numerous little hollows that cut down to the Hudson River north of Troy. Some of these are very short, beginning west of the Boston and Maine Railroad tracks. Others begin between the railroad and the auto road to Melrose, and give the railroad passengers fascinating glimpses of deep rock-lined ravines picturesquely decorated with evergreens. Still others, like Deepkill, rise far back of Rice Mountain, among the flanks of Bald Mountain, and have formed considerable valleys by the time the road and the railroad are reached, as at Grant Hollow.
Along all of these hollows the winter scenery surpasses the views at any other time of the year. The rubbish, dirt and junk which the ravine dwellers seem to accumulate with the passing years, and with the passing of the season, lie conceled under the purifying blanket of snow. Scenes that distress at oter times of the year with the evidences of neglect, thriftlessness and poverty, are transformed into fairy gorges of ice and snow in winter, concealing all traces of human shortcomings. Every prospect pleases, nor even man seems vile.
One of my favorite walks in winter time is down Thieves’ Hollow, starting just beyond Spiegletown, north of the little church. There is a road that follows down the right hand side of this hollow [Irish Road, formerly Thieves Hollow Road], at the top of the ravine, along the edge of the fields. It affords many a fascinating view over the Hudson valley and down into the splendidly timbered upper part of the ravine. Still finer views are often obtained by stepping from the road over to the ravine’s edge.
A short distance from where you leave the main road you come upon the attractive rustic camp of Dr. R. H. Irish. It commands a fine view over the upper part of the valley.
About half way to the Hudson River the hollow passes under the B. and M. and is soon joined by another road from the south [Haughney Road?]. Along here are a number of houses, which have seen better days, such as the Flynn house, which was quite a place in its day, but now, like most of its neighbors, falling into wrack and ruin. Most of the people now living in this ravine are newcomers.
For a half mile of the lower course of the hollow, the stream disappears underground, then reappears a cold refreshing stream in the summer time. This waterless part of the ravine bears a dismal forlorn note in the summer time, but in winter, the disappearing tricks of the water are rendered invisible. The charm of clean banks of ice and snow, twisting and rolling with the tortuous course of the little dry channel, is sharpened with the snow-laden evergreens, and the icy glistening branches of the hardwoods. Catch the scene near sunset time, and the pink and lavender glow on the hillsides and fields thrills you with its exhilarating beauty. Then Coolkill, as this lower part of the ravine is called, becomes a haunt of romantic beauty.
You soon come to the view of the Hudson River. At the corner of the river level road and the Coolkill Road [Irish Road?] stands an old house, a roadhouse or tavern-like place, at one time known as Camp Coolkill.
From this spot there is a two-mile walk to the carline in Lansingburgh. The first mile lies along the river’s edge. You look across the icy surface to the flats above Waterford, along which runs the auto road to Mechanicville and the Hudson Valley Railway. To the east of the road the bluffs rise steeply a couple of hundred feet. You approach the region of summer cottages which line both sides of the river.
Halfway to Lansingburgh the road forks and you can choose the left-hand route to the Fifth Avenue bus, or the right-hand route to the Second Avenue carline. In either cases this last mile is lined with cottages, the right-hand route lying through Pleasantdale.
If you would pick the ideal day for this walk select a day when the snow is crusted over hard enough to bear your weight. The first mile down the ravine road from Speigletown is little traveled and rarely so in winter. The snow is often not broken on this stretch, and if deep would be hard going without snowshoes unless the crust is hard enough to hold. I enjoy snowshoeing, but enjoy still more the exhilaration of striding a couple of feet above the surface of the fields on those icy snow crusts that are frequent and often long lasting in these northern winters. The right crust will be not too icy, but have just the right roughness and surface softness that gives the foot secure hold. Then you can swing along with an ease and a buoyancy you never experience on a road, and the thrill of walking unhindered over the barb-wire fences is the next thing to an airplane flight.
This walk from Speigletown is only a mile and a half down the ravine, or three and a half miles in all. By taking the 2:15 Saturday afternoon bus from the bus terminal you can easily be back downtown by 5 o’clock.
Troy Times. February 4, 1927: 8 cols 3-4.

Bridge Under Construction.
Work on the construction of a new bridge over Thieves Hollow Creek on the River Road, a mile north of Pleasantdale, was begun yesterday by the town of Schaghticoke.
Troy Times. July 24, 1930: 10 col 1.