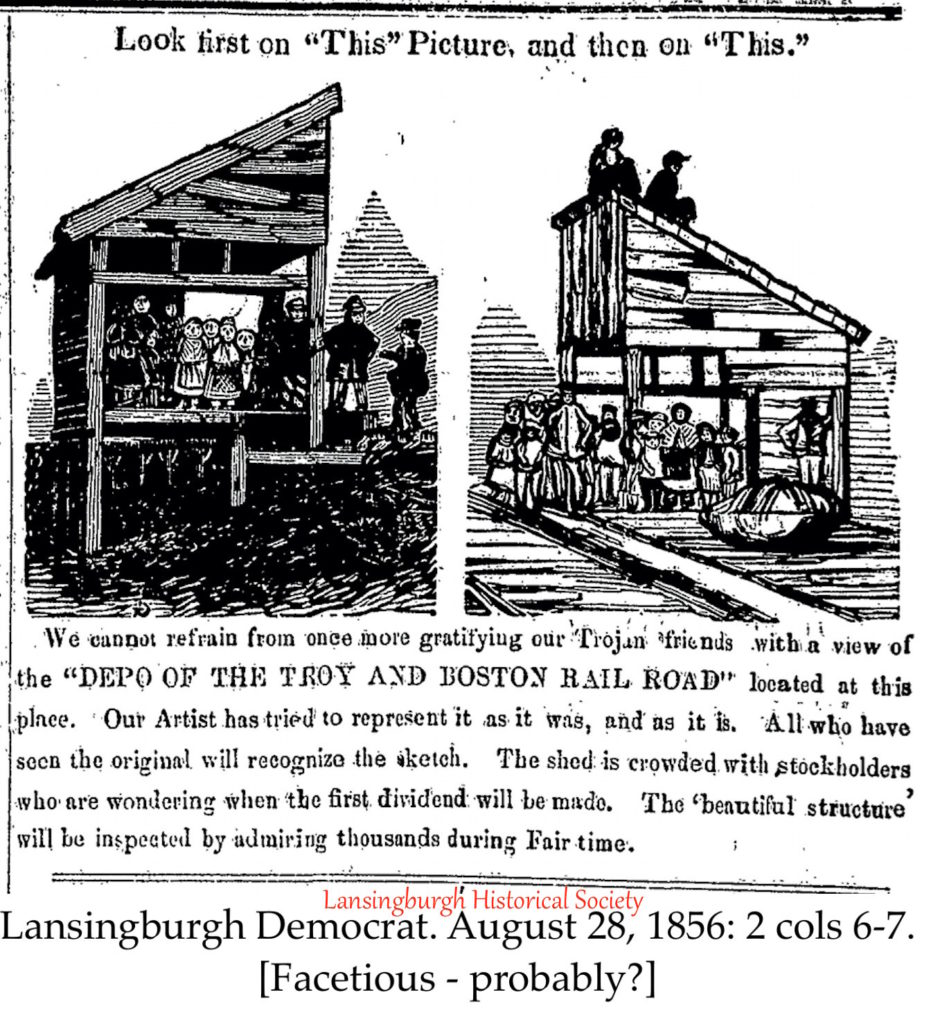 Look first on “This” Picture, and then on “This.”
We cannot refrain from once more gratifying our Trojan friends with a view of the “DEPO OF THE TROY AND BOSTON RAIL ROAD” located at this place. Our Artist has tried to represent it as it was, and as it is. All who have seen the original will recognize the sketch. The shed is crowded with stockholders who are wondering when the first dividend will be made. The ‘beautiful structure’ will be inspected by admiring thousands during Fair time.
Lansingburgh Democrat. August 28, 1856: 2 cols 6-7. [Facetious – probably?]

☞ LANSINGBURGH.—N. P. Jones, contractor, and George Moss, carpenter, on the Troy and Boston Depot, at Lansingburgh, while engaged in putting in its place one of the royal arches on which the roofing is to be laid, fell to the ground, a distance f thirty feet, and were seriously injured. Lamb is afraid the accident portends no good to the structure, and cites the cases of the three men who were killed during the erection of our Depot! Superstition.
Troy Daily Times. May 21, 1858: 3 col 3.

LANSINGBURGH DEPOT.—The Lansingburgh Depot, on the Troy and Boston Railroad, is now complete. The Company have caused the grounds, in the vicinity of the Depot to be properly graded and a side walk to be put in. A new road connecting the Depot with North street has just been opened, and is in good condition. Persons visiting Lansingburgh will find this a convenient and comfortable mode. On and after Monday 26th, trains will stop at the new Depot to receive and leave passengers.
Troy Daily Whig. July 24, 1858: 3 col 4.

LANSINGBURGH.
BUILDING IMPROVEMENTS.—G. W. Mosely, Superintendent of the Troy and Boston Railroad, is putting the station at this place in better condition than it has been in for some time. The building is being thoroughly cleansed and the stair and avenue up to it repaired and regraded. The avenue is also lighted evenings so that pedestrians can see their way clearly.
Troy Daily Whig. November 5, 1872: 3 col 3.

—Patrick Powderly, while riding down the depot hill yesterday was thrown from his sleigh and sustained severe scalp wounds.
Lansingburgh Courier. December 10, 1880: 3 col 1.

New Depot for the ‘Burgh.
The prospects for a new depot to be erected by the Fitchburgh Railroad Company west of present depot on the hill are bright. The trustees accepted donations of land from the Gardner estate and from Chesbrough & Sons and work will be commence on the road leading to the depot at once. When completed the Fitchburg company has signified its willingness to erect a depot.
Lansingburgh Courier. November 17, 1888: 3 col 4.

—Surveyor Hicks, under the supervision of Village Trustee Palmer, of the road committee, laid out the proposed widened roadway up Depot hill. The plan was to straighten the road, but it was found that to do this would cut nine feet off D. P. Chesbrough’s building, at the foot of the hill. Under such circumstance the plan has been abandoned.
Lansingburgh Courier. April 20, 1889: 3 col 2

Trustee Palmer said the Fitchburgh railroad company had failed to put down their plank crossing, thus causing a delay in finishing work on depot hill. […]
Trustee Palmer was thanked for his efforts to stop driving on the depot hill sidewalk. He was authorized to resort to the law if necessary to enforce the matter.
“Meeting of the Trustees.” Lansingburgh Courier. November 2, 1889: 3 col 3.

—There is a movement on foot to have a new passenger depot on the Fitchburg railroad at Lansingburgh. The present station was built forty-three years ago by the taxpayers of the village of Lansingburgh, and the railroad company has had the free use of it ever since.
“Lansingburgh.” Troy Daily Times. July 2, 1897: 4 col 2.

Singular Journey Made by Blue Prints.
A most unusual incident occurred yesterday which had its beginning near the Lansingburgh railroad station of the Boston and Maine Railroad and terminated in the Union station in this city. At the Lansingburgh station two civil engineers, with plans of the proposed new station, were making surveys for the new structure, when an approaching train compelled them to drop their work and hurry to a place of safety. Among the things dropped were the blue prints showing the plans of the new station. These dropped between the rolls of the track on which the train was running. The engineers were much surprised when they saw their plans drawn under the train, and greater was their surprise after the train had passed at seeing that the plans had gone along. The papers clung to the truck of the last coach and the engineers, with presence of mind, telegraphed the incident to the telegraph office at the Union Station. When the train rolled in James E. Matson, the Boston and Maine telegraph operator, was there to meet it, and when the train stopped the plans fell to the ground. They were unharmed, except for a few oil spots upon them.
Troy Times. October 17, 1907: 5 col 5. 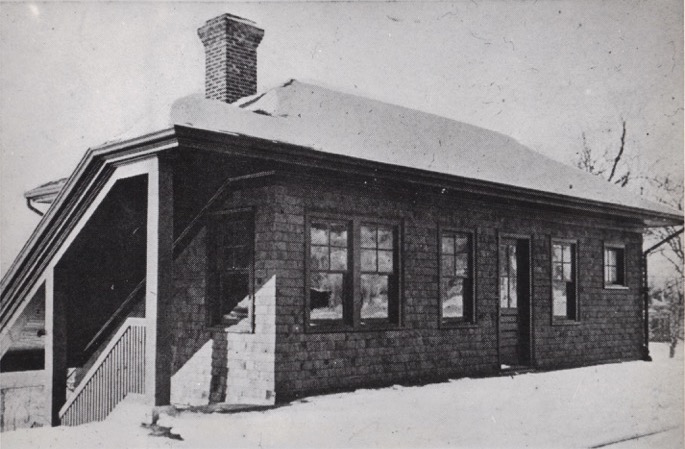 This attractive station is conveniently located at the head of Fifteenth Street at the point where the road leading up the hill from Fourteenth Street crosses the tracks. It is on the west side of the tracks, whereas the old station between Sixteenth and Seventeenth Streets is located on the east side of the tracks, so that all travelers had to cross the tracks to reach the station from the northern part of Troy. The old Lansingburgh station is probably the oldest on the Boston and Maine Railroad and was erected when the Troy and Boston Railroad was built through to Troy. It is one of the few stations remaining where the residence of the station agent was provided on the second floor, a very common custom in the early days of railroading. The new station was opened to the traveling public to-day.
Troy Times. February 22, 1908. Art Section.

Lansingburgh Station Agent Is Eliminated
The Public Service Commission has granted the petition of the Boston & Maine Railroad to discontinue the services of its agent at the Lansingburgh station and the substitution therefore of a caretaker. The station will be continued on an “open-collect” basis; the waiting room will be maintained by a caretaker and kept open when required for the convenience of passengers.
The freight room will be kept open during a specified time daily, except Sunday; freight left by the company’s freight trains will be left in the freight room and proper notices shall be posted in the station informing the public as to the practices and regulations for the operation of the station.
It was shown at the hearing that passenger service at this station has greatly declined from 1931, when the revenue was $2,097.65 as against $989.13 in the year 1925.
Troy Times. October 23, 1926: 7 col 6.

YOUTHS HELD FOR FORCING DOOR OF RAILROAD STATION.
—
Burglary and Juvenile Delinquency Charges Made Against Pair.
Two Lansingburgh youths were arrested Saturday afternoon by Special Officer Elmer Newton of the Boston and Maine Railroad police for breaking into the Lansingburgh ticket office.
Ward Van Keuren, 16 years old, and Joseph Plante, 15, are the two held, the former being charged with burglary and the latter because of his age with juvenile delinquency.
Several attempts to enter the Lansingburgh station have been made within the last few days, Officer Newton said. Saturday he secreted himself in the station after it closed. The officer said that the two boys forced the station door and, after they had effected an entrance, he placed them both under arrest.
Troy Times. July 25, 1932: 5 col 4.