“Perhaps the best way to approach films such as The Last of the Pagans and Omoo Omoo the Shark God is to see them as exemplifying a marketing strategy which reduces the author’s name to the function of signifying ‘literature’ as part of the total entertainment package offered by these films.” — Hayes, Kevin J. Herman Melville in Context. Cambridge UP, 2018.

Omoo-Omoo the Shark God (1949) was, supposedly, an adaptation of Herman Melville’s second novel Omoo (1847). The film was only the fifth adaptation for the screen of Melville. It was preceded by The Sea Beast (1926), a silent adaptation of Moby-Dick starring John Barrymore; Moby Dick (1930), a sound remake of The Sea Beast again starring Barrymore and a German-language version filmed simultaneously with it but starring William Dieterle, Dämon des Meeres (1931); and Last of the Pagans (1935), based (barely) on Typee.

The “Melville revival” of the 1920s likely contributed to the cinematic interest in Melville of the 1920s and 30s and later, or, as Hayes wrote, at least some recognition within the film industry that Melville’s name potentially had some value as a marketing tool.

Though it seems reasonably likely that Omoo-Omoo the Shark God played in at least one theater in Troy if not in Lansingburgh, given that the film was screened in Albany and Schenectady, as yet an ad to substantiate such a showing has not been located. However, the search has not yet been exhaustive.

MELVILLE’S ‘TYPEE’ WILL BE MONOGRAM FILM
“Typee,” that splendid impression of the South Seas written by the classic American author Herman Melville, is to be urged to the screen by the Monogram organization. There has been mention in the past of a filmization of this celebrated book, but it had never reached the definite point. George D. Greene is now assigned as the producer, and Jack Natteford, who worked on pictures for the United States government while in the service, from which he was lately discharged, is writing the screen play. Among the service fiims that he made was “B-25” for the use of the Navy. Melville was the author of “Moby Dick,” which twice served John Barrymore in his film career. “Typee” was written in 1846, and dealt with the author’s adventures among the cannibals of the Marquesas Islands in 1842.
Los Angeles Times. January 15, 1944: 6 cols 1-2. [George D. Greene would ultimately receive credits on Omoo-Omoo the Shark God.]

Roddy MacDowell, age 19, has his first love affair in the movies. He goes romantic in “Typee” and that’s all the romance in Roddy’s life at this moment, despite the rumors.
Roddy is elated about being in “Typee,” a story of Herman Melville, author of ‘Moby Dick,” and I’ll tell you why. Lindsay Parsons (no relation) is not only starring Roddy but is making him an associate producer. This is the beginning of a long-term contract for Roddy with Parsons, and the boys are feeling pretty good about “Typee” which goes to the aristocratic section of Monogram—Allied Artists.
Parsons, Louella. “Hollywood.” Albany Times-Union. March 8, 1948: 5 cols 1-2. [MacDowell and Parsons would work together on several films, but not an adaptation of Melville.] 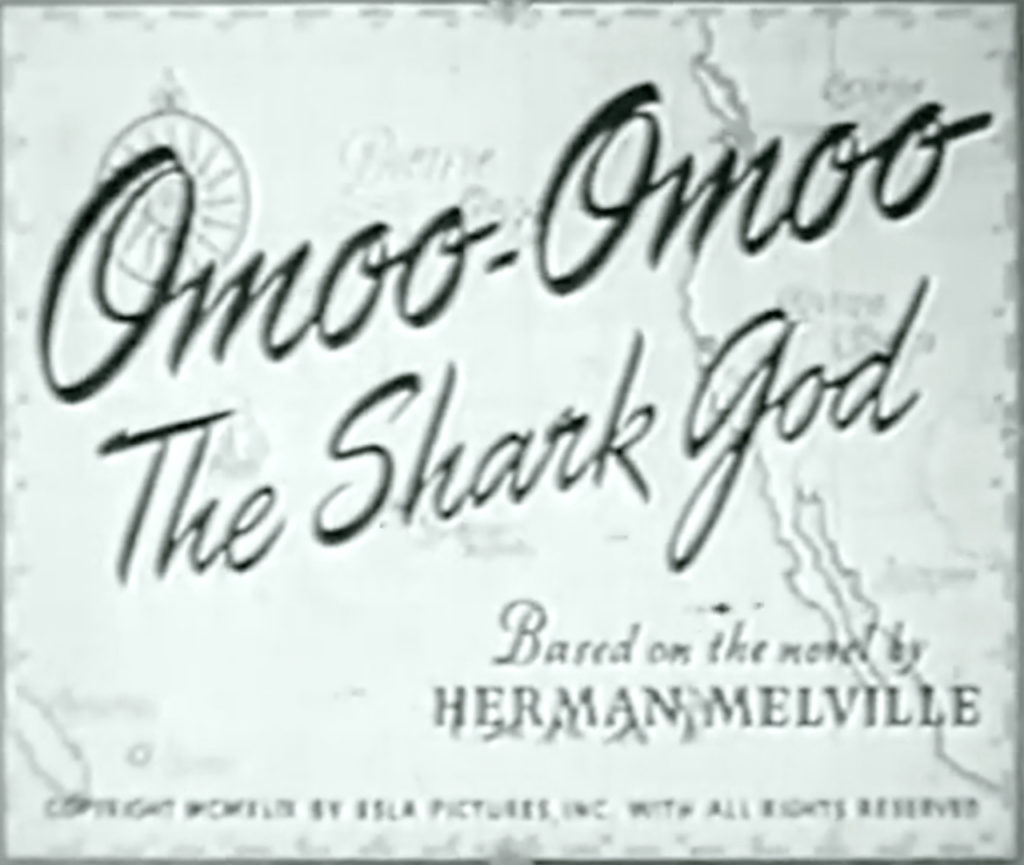 Out of respect to the memory of Herman Melville, we say nothing about “Omoo Omoo,” the co-feature, for which Melville’s work is accused of being the inspiration.
Springfield Union [MA]. July 28, 1949: 18 cols 5-6. 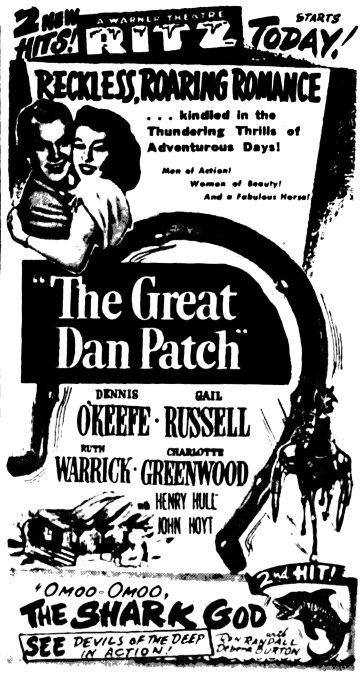 YOUR THEATER PRESENTS
By CHRISTOPHER ERVIN
Titantic [sic] struggles between monsters of the sea, death battles between huge cobras and jungle animals are some of the thrills to be seen in “Omoo-Omoo (The Shark God), a screen Guild release, which will show at the Cozy Friday and Saturday.
“Omoo-Omoo” stars Ron Randell, handsome young Australian actor who has attained stardom in Hollywood during the last year. The motion picture is based on the adventure novel by Herman Melville.
Gladewater Daily Mirror. March 16, 1950: 2 cols 2-3.

The next attempt to film a Melville work was a peculiar one indeed. Allegedly based on Omoo, the film Omoo-Omoo (The Shark God) (1949) begins with what are supposed to be the words of Melville on the screen, dated 15 January 1879 and read by a voice-over narrator who says he is about to relate the strangest of all his experiences on the high seas, something that happened in 1874. When he concludes, “This is the story of the Omoo tabu and the Shark God,” we should know what we are in for: a low-budget, grade-B sea and jungle adventure that has no relationship to Melville’s book. The uncertainty of the title (why the repetition of Omoo and why the necessity to add a subtitle in parentheses?) is but a reflection of the muddled uncertainty of the script and direction.
Despite the opening narration, Melville does not appear in the film. Instead a Doctor Humphrey Long (George Meeker), an alcoholic physician who has signed on the schooner Julia bound for Tahiti, continues the narrative. A captain ill from some strange malady, his attending daughter Julie, a surly crew breaking out in fights, and the discovery of a Tahitian stowaway are supposed to add mystery but only draw from the largely unknown cast an incompetent and uninspired performance.
Inge, M. Thomas. “Melville as Popular Culture.” A Companion to Melville Studies. ed. John Bryant. Greenwood Press, 1986. 701