The Powers Opera House, or Concert Hall, later Whiting’s Theatre and briefly Proctor’s Theatre, began its life as an entertainment venue in 1877 – its second life, after having first been a church. It had been built in 1845 by the First Baptist Society of Lansingburgh and bought by the Olivet Presbyterian Church in 1861. 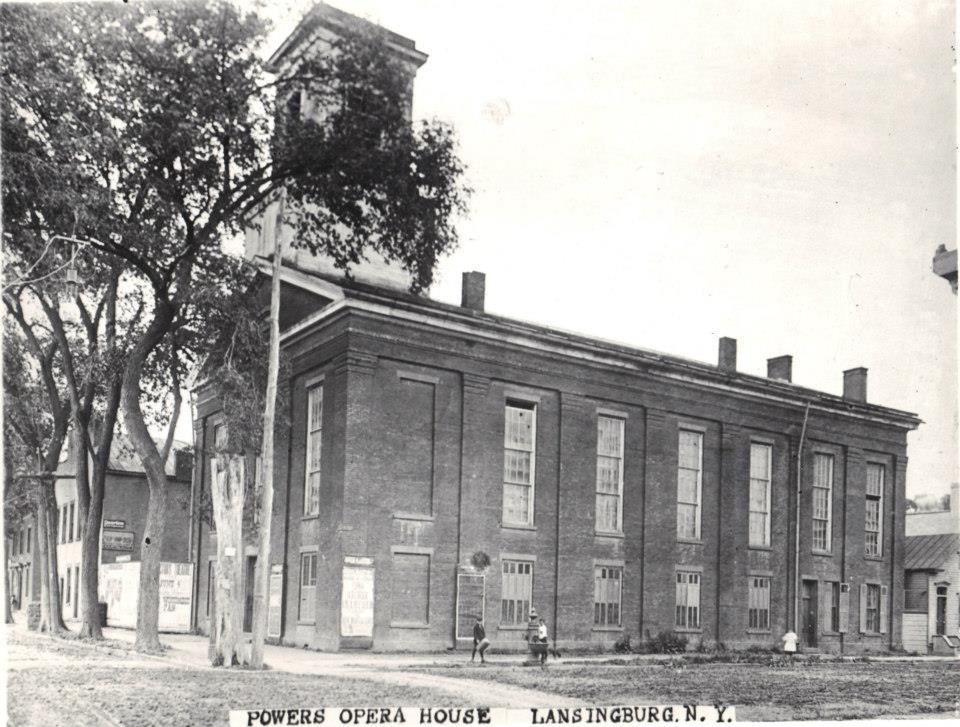 Costume Concert.
A grand costume concert will take place on Thursday evening, November 7th, at Concert Hall, (the old Olivet church) under the auspices of Trinity Guild. The concert will be a treat to all lovers of music and song, and those who avail themselves of the opportunity will be amply repaid. The members of the Guild will spare no pains to make this concert, like all their entertainments, a grand success.
Lansingburgh Gazette. October 27, 1877: 3 col 2.

—An exhibition of the new Lyman Howe moving picture is to be given at Powers Opera House in September under the auspices of the primary department of the First Presbyterian Sunday School.
Troy Daily Times. August 16, 1900: 4 col 2.

—Lyman H. Howe’s moving pictures will be shown this evening at Powers Opera House in Upper Troy under the auspices of the Sunday Night Club of Millis Memorial Baptist Church. These pictures are very superior, and they are presented with the most improved apparatus There is no disagreeable flickering and they are very plain. Their selection has been carefully made and they include a wide variety. The coronation views are some of the timely and popular scenes just now. There are also local views of much interest. This evening’s entertainment should be largely patronized.
“Amusements.” Troy Daily Times. October 13, 1903: 2 col 6. (The “coronation views” may have been Georges Méliès’ The Coronation of Edward VII, which Lyman H. Howe distributed in the United States.)

—”The Overthrow of Satan’s Empire” will be the subject of a free Bible lecture to-morrow at 3 p. m. in Proctor’s Theatre on Seventeenth Street by Morgan T. Lewis, under the auspices of the local branch of the International Bible Students’ Association.
“Lansingburgh.” Troy Times. April 8, 1911: 11 col 3.

Recalling the Past.
Proctor’s Theatre on Seventeenth Street is receiving a coat of bright paint and cupids and other mural decorations. Its history is interesting. The building, now owned by the Powers estate, was built by the Baptists of Lansingburgh about 1860. The congregation shortly encountered financial difficulties. At that time the Second Presbyterian Church, now known as Olivet Presbyterian Church, was occupying the site where Millis Memorial Church now stands. The congregation offered to trade its edifice for that of the Baptists, accepting with the building on Seventeenth Street all financial liability. The name was at once changed to Olivet Presbyterian Church. The Baptists went on to occupy their part of the bargain, and have since been on the same site, a new church being built for them later by Lansing Millis. Then the Olivet parishioners secured a new church and the building went begging for years afterward. Three years ago the building was leased by the Proctor vaudeville syndicate. In two weeks’ time the third season of moving pictures and vaudeville will be started.
Troy Times. September 8, 1911: 6 col 2.

—At Whiting’s Theatre, Seventeenth Street and Third Avenue, to-morrow night a special performance will be given for the benefit of St. Augustine’s altar fund. Jacob Teitsch, who is the instigator of the plan, will pay the cost of the affair. All door receipts will be added to the fund. The management proposes a program including the two-reel feature, “The Redemption.”
“Lansingburgh.” Troy Times. April 26, 1913: 6 col 2.

LANSINGBURGH.
—
Owner of Powers Opera House is Opposed to Having Fire-Alarm Bell Installed There—Fraternal Societies to Meet—Other News.
The agitation for the installation of a fire-alarm bell in the tower of the old Powers Opera House on [One Hundred] Seventeenth Street, which was started two weeks ago by several members of the local fire department, will never progress beyond the discussion stage if the firemen insist on the opera house as the site for the new bell. This was the opinion credited to the owner of the building, an Albany man, in a recent discussion with one of the men who has been instrumental in starting the agitation for the bell. The proprietor of the opera house is alleged to have stated that the old bell was removed because he feared that the weight of the instrument would eventually cause the tower to collapse, and he did not wish to assume the responsibility of having another bell installed, when, in his opinion, such a move might jeopardize the lives of persons passing the hall.
Troy Times. February 26, 1917: 2 col 4.
OLD LANDMARK DESTROYED.
—
Powers Opera House in Lansingburgh Visited by Disastrous Fire—Started in Picture Operator’s Room—Only the Walls Left Standing.
The Powers Opera House on [One Hundred] Seventeenth Street, Lansingburgh, one of the oldest landmarks in the city, was completely destroyed by a fire which broke out about 10:30 o’clock Sunday evening and which was not under control until after 1 o’clock this morning. The fire originated in the operator’s room of the moving-picture theatre on the first floor and it spread so rapidly that the entire building was a mass of flames long before the arrival of the department. Chief Wike sent a second alarm from box 24 and an additional call to Troy for help. The Eddy and Bussey steamers, with Battalion Chief Rankin, answered the latter call. John Molan of 636 Clinton Avenue, Albany, owner of the building, and George L. Meztner, an employee of the theatre, discovered the fire while standing at Seventeenth Street and Second Avenue waiting for a car.

Theatre Open an Hour Before.
It is considered fortunate that the fire did not develop an hour earlier and at a time when the moving-picture theatre was open, for it is almost certain that many lives would have been lost. The condition of the flooring and girders in the interior of the building were aged to such an extent that it resembled tinder and it furnished excellent fuel for the flames. The fire spread so rapidly that, even had there been no panic, it is extremely improbable that the patrons of the theatre could have made a safe exit. Mr. Molan stated this morning that he could not give an accurate estimate of his loss, but he added that it was partly covered by insurance.

Only the Walls Remain.
Less than fifteen minutes after the first alarm sounded the roof of the building collapsed, sending up a shower of sparks. The illumination from the fire attracted large crowds from nearby cities, and Capt. James N. O’Brien of the Fourth Precinct was compelled to establish fire lines. At 11:20 o’clock Patrolmen Fox and Maloney discovered a blaze on the stairway in the rear of 852 Second Avenue, owned by Mrs. Ann Duffy, which was probably caused by sparks from the big fire. The second fire was extinguished with chemicals. The out-tap for the Powers fire was sounded after 3:30 o’clock. The interior of the building was completely destroyed by the flames and the four brick walls were all that remained standing this morning.

Originally a Church.
The Powers Opera House was originally constructed as a church in 1861 by the First Baptist congregation of Lansingburgh, but it was never occupied by that denomination, having been sold on May 17, 1861, to the Second Presbyterian congregation, which later changed its name to that of Olivet Presbyterian Church. The congregation remained in this building until 1877, when the property on the northwest corner of Twenty-five Street and Third Avenue, the present site of Olivet Church, was acquired. For several years it was used as a meeting place by the residents of the old village and church entertainments were held there at frequent intervals. Political meetings were also held in the building, and it answered practically every purpose of a town hall.

As an Opera House.
About thirty years ago Nathaniel B. Powers acquired possession of the property and he remodeled the building into a concert hall and it soon attained a wide reputation, being known as the Powers Opera House. Many of the most prominent actors who attained fame in the eighties performed at the theatre, which was then one of the most prominent buildings in the old village of Lansingburgh. About twenty years ago Irving Crane, an actor of considerable repute at that time, leased the building, and after installing several modern improvements, including the slanting floors and opera chairs, opened a season of repertoire. It is said on good authority that Eva Tanguay, who is now considered the foremost comedienne of the stage and who was then a resident of Cohoes, appeared first in public in one of Mr. Irving’s entertainments.

Used for Movies.
After Mr. Irving relinquished his lease the building remained idle for several years, and with the exception of an odd church entertainment at irregular intervals, the doors were seldom opened. It was one of the assets of the defunct Powers Bank, and its present owner, Mr. Molan, purchased it from William H. Anderson, the receiver, last summer. It was remodeled into a moving-picture-theatre about four years ago and since that time it has been under several managements. A crowd of curious residents visited the ruins this morning, and in order to preclude the possibility of an accident caused by falling walls the police have established a danger zone along the north side of Seventeenth Street and the west side of Third Avenue in the immediate vicinity of the building.
Troy Times. March 26, 1917: 5 col 4.