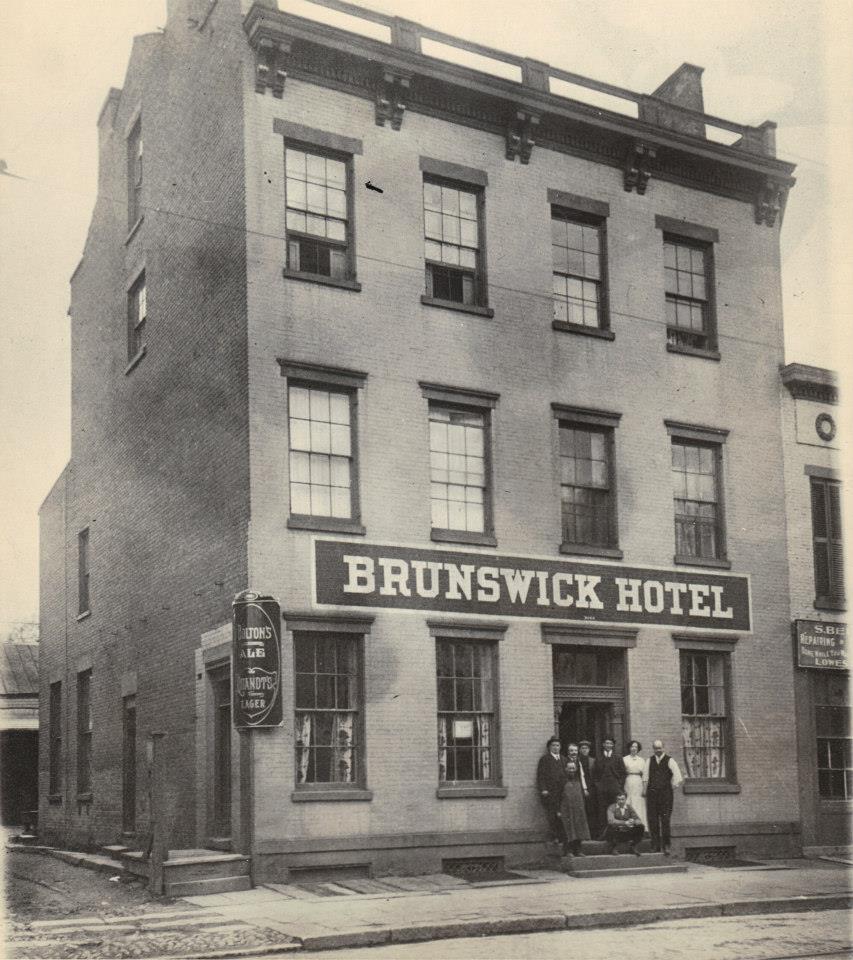 For earlier history of this building see Wilson House.

—The building at 585 Second avenue, recently vacated by the Y. M. C. A., is being converted into a hotel and will be known as the “Wilson House.” It will be under the management of E. D. Strunk.
“Local News and Seasonable Jottings.” Lansingburgh Courier. May 22, 1890: 3 col 2.

—Harry Strunk, son of landlord Strunk of the Brunswick Hotel, in attempting to drive into the hotel yard Monday afternoon turned too short and upset the sleigh. Besides young Strunk in the sleigh was J. P. Wilson, who is 85 years old. Mr. Wilson was quite severely shaken up, and for a time it was feared that serious results would follow, but in a few hours he was himself again.
“Local News and Seasonable Jottings.” Lansingburgh Courier. February 19, 1891: 3 col 1.

OBITUARY
—
E. D. STRUNK.
Mr. E. D. Strunk died at his hotel, “The Brunswick,” aged 53 years. Mr. Strunk was born in Millville, Brunswick, N. Y. Mr. Strunk was a born hotel keeper, he knew just what wanted to be done about a hotel and how to do it, and he saw that everything was done. He was a genial and popular landlord, and no one ever went away from his house who was not satisfied. He kept the Melrose hotel for 15 years, also the hotel at Valley Falls and Albia. After that he kept the Everett House in Troy. He kept the Phoenix hotel, Lansingburgh, for 3 years, and at the same time the “Island Park Club House.” He also kept the American House and at the time of his death was proprietor of “The Brunswick.” On Tuesday, the day of his funeral, the hotel was packed with people, good friends, and many stood on the sidewalk unable to get in to the house. it was noticeable how many solid country people there were in addition to the best of Lansingburgh’s citizens. The floral tributes were numerous and beautiful. Lansingburgh, in the death of Mr. E. D. Strunk, has lost an excellent citizen.
Mr. Strunk left a widow and four children—Miss Carrie, Mrs. Bedford Filkins, Clayton and Harry. The interment was at Schaghticoke cemetery and the services were conducted there by the Masons.
Lansingburgh Courier. April 9, 1891: 3 col 3.

—On Friday, May 1, Charles Kafka, of West Troy, will assume charge of the Brunswick Hotel, having purchased the lease held by the late E. D. Strunk. Mr. Kafka has had experience in the hotel business, having conducted the Collins House at West Troy, and he will no doubt make a popular landlord.
“Local News and Seasonable Jottings.” Lansingburgh Courier. April 30, 1891: 3 col 1.

—Mrs. Jennie L. Beach has sold the property on Second avenue near [One hundred] Sixteenth street, known as the Wilson house block, to M. F. Wager for $11,00. The property comprises the Brunswick hotel and two stores on the north.
“Local News and Seasonable Jottings.” Lansingburgh Courier. May 18, 1893: 3 col 1.

—M. F. Wager has taken possession of his new purchase, the Brunswick hotel property, on Second avenue between [One Hundred] Fifteenth and Sixteenth streets. Mr. Wager intends remodeling the ground floor over for stores and the upper floor into flats.
“Local News and Seasonable Jottings.” Lansingburgh Courier. July 6, 1893: 3 col 1.

The Brunswick hotel property on Second avenue, of which Mr. Magee is the owner, will also be remodeled, but definite plans have not yet been made.
“Lansingburgh.” Troy Daily Times. December 29, 1898: 4 col 3.

—A turkey supper will be enjoyed next Monday evening at the Brunswick Hotel by the members of the Mason Hose Company.
“Lansingburgh.” Troy Times. December 28, 1908: 6 col 1.

The Wilson House
Troy, May 13.
Editor Troy Times:
In the article concerning the Wilson house in Lansingburgh the impression is given that is it an ancient building. One look at the building shows that it is modern. On commenting at one time upon the rather peculiar but not at all antique fashion of the inside wood finish, Mr. Wilson thus explained to the writer: “An old house was torn down in New York and I bought the materials cheap and brought them up here on a canalboat and built this house.” The bricks may have been made in Holland, but they don’t look it. The Wilson house was built less than sixty years ago.
“Home Matters; People’s Column.” Troy Times. May 14, 1913: 3 col 4.
Hotel Changes
The old Brunswick Hotel on Second Avenue which has been conducted as a hostelry for some eighty years past, barring a few months thirty years ago, when the Young Men’s Christian Association was located in the building, has undergone a change of management. John Bowers, who has been the proprietor of the place for twenty years past, last night transferred the business to John L. Kruger, for several years employed at the Phoenix Hotel. Mr. Kruger will take charge immediately. Mr. Bowers announces his intention of permanently retiring. It is of interest to note that the Brunswick Hotel stood in almost its present condition in New York city probably one hundred years ago and that it was subsequently purchased by the late Jesse P. Wilson and removed to Lansingburgh, brick by brick and the woodwork in sections, being set up where it now stands, practically the same hotel as it once stood in the metropolis. For many years Mr. Wilson conducted the hostelry. About the year 1880 it became for a brief period the home of the Young Men’s Christian Association. Then came Patrick Winne as proprietor. He sold out to Theodore Ray, who ran the hotel until it became the property of Mr. Bowers about twenty years ago. Although not the oldest hostelry in Lansingburgh the Brunswick Hotel has for a good many years been a popular one with the residents of the ‘burgh. The new proprietor is expected to make a number of improvements on assuming control of the establishment.
Troy Times. March 4, 1914: 6 col 2.