New Sambrook Greenhouses Are Like Fairyland
What may be considered the best collection of flowers in this section of the state, including some of the rarest blooms in this section of the country, were found on a visit of a reporter of The Troy Times to the greenhouses of John W. Sambrook on the Oakwood Avenue Road, just beyond the city limits of Troy. The greenhouses have just been completed, work having been started on them last August.
Mr. Sambrook formerly conducted a number of greenhouses at Eighth Street and Fifth Avenue, Watervliet, but due to the limited space available was obliged to secure a new site to develop his range of powers. Last summer he was successful in purchasing the 75-acre estate of the late Jonathan Freeman on the Oakwood Avenue Road, on which he has already erected two greenhouses. Mr. Sambrook proposes to develop a villa site residential section on one side of the greenhouses and a nursery plantation on the other side.

In the Greenhouses.
Upon entering the first greenhouse one sees a wonderful bed of forget-me-nots of rare color, followed by beds of calendula, snap dragons, migonette and an extraordinary bed of large and beautiful pansies. In the center of the house are seen four rows, each 150 feet long, of fancy sweetpeas of all colors. At the other end of the same house one finds four plats, 150 feet long, entirely filled with pink and white carnations in full bloom. In passing through to the second greenhouse the visitor sees a room entirely filled with delicate maiden-hair ferns. Here also is found the Easter stock in full bloom, consisting of 1,000 pots of Easter lilies and 1,000 pots of hydrangeas. In this house, too, are found many novelties in rose bushes and the metro sider, or South African iron wood tree, commonly called [?] dottle brush. Here are also found a number of orchid plants, including the cypripedium and cegyne cristate orchids, 50 years old, which were raised by Mr. Sambrook’s father, George T Sambrook. On the other half of the same house [?] is shown a large bed of gladioli coming into bloom, snap dragons and Japanese primroses in full bloom and 8,000 geranium plants and vines or the summer season. Numerous other plants seldom seen in this section of the state are also there.

To Erect Rose House.
Mr. Sambrook plans to erect a third house shortly which will be [?] over entirely to the raising of roses. The house will contain about [?000] rose bushes, included the Briarcliffe, Madam Butterfly, Temar and Rosalandi varieties.
In speaking of the project, Mr. Sambrook said that it was entirely a community proposition and had been erected for the education of the people of Troy in the various species of flowers and the manner of raising them. He added: Many people of Troy travel to New York and other cities to see the annual flower shows. They spend money to see these flowers. The erection of these greenhouses will give the people of this vicinity the opportunity of seeing these same flowers and others, which cannot be found elsewhere, in their own city.”
Mr. Sambrook has extended an invitation to the public at large to pay his houses a visit. “I do not want the people to come to buy,” he said, “I want them to come to see.”

Life in the Flower Business.
Mr. Sambrook conducts a florist shop at the corner of Fifth Avenue and Fulton Street, where he sells his flowers. His life is a story of a [?] who, as a boy, started in the business by selling flowers on the street. He later worked for William Cox, who conducted a florist shop in Fulton Street. After three months he persuaded his father to buy the business from Mr Cox. This was in 1888. His business increased steadily. In 1915 he moved his place of business to the present store, which is conducted by Mr. Sambrook and his son, Harry Sambrook.

Residential Villa Site.
Many improvements are proposed by Mr. Sambrook to the old Freeman estate. On the north side of the greenhouses 50 acres of land will be laid out in acres of land will be laid out in acre plats by a landscape engineer, with boulevards, containing trees and shrubs, creating a park effect. This residential villa site will be sold after it has been finished. In front of the greenhouses it is propose to erect a salesroom and display houses with a pond and display garden in front patterned after the Elizabeth Gardens in Hartford, Conn. On the opposite side of the road the old colonial farmhouse will be remodeled into a modern residence. The private flower garden next to the residence will be taken care of by Mr. Sambrook’s daughter Kathryn, who is skilled in the art of gardening. The garden now contains old fashioned crocuses, grape hyacinths and other ancient specimens.

Other Features.
On the south side of the greenhouses a nursery will be established for the planting of shrubs, hedges and trees for residential sites. This [?] a need which Troy has always [?] lacked, Mr. Sambrook stated. [?] the rear of the houses is a pond eight feet deep, from which Mr. Sambrook draws his water supply. This he intends to stock with trout, where his friends may find sport. Next to the residence may be found a greenhouse built 50 years ago which Mr. Sambrook will maintain as his own private workhouse, in which he will grow rare specimens of flowers. A bungalow has been erected for Mr. Sambrook’s foreman, David Collins, who has had extensive experience in the art of raising flowers and plants. About 12 men re being employed at the greenhouses at the present time.
Mr. Sambrook expects to occupy his new residence, across from the greenhouses, about May 1.
Troy Times. April 7, 1927: 10 cols 1-2. 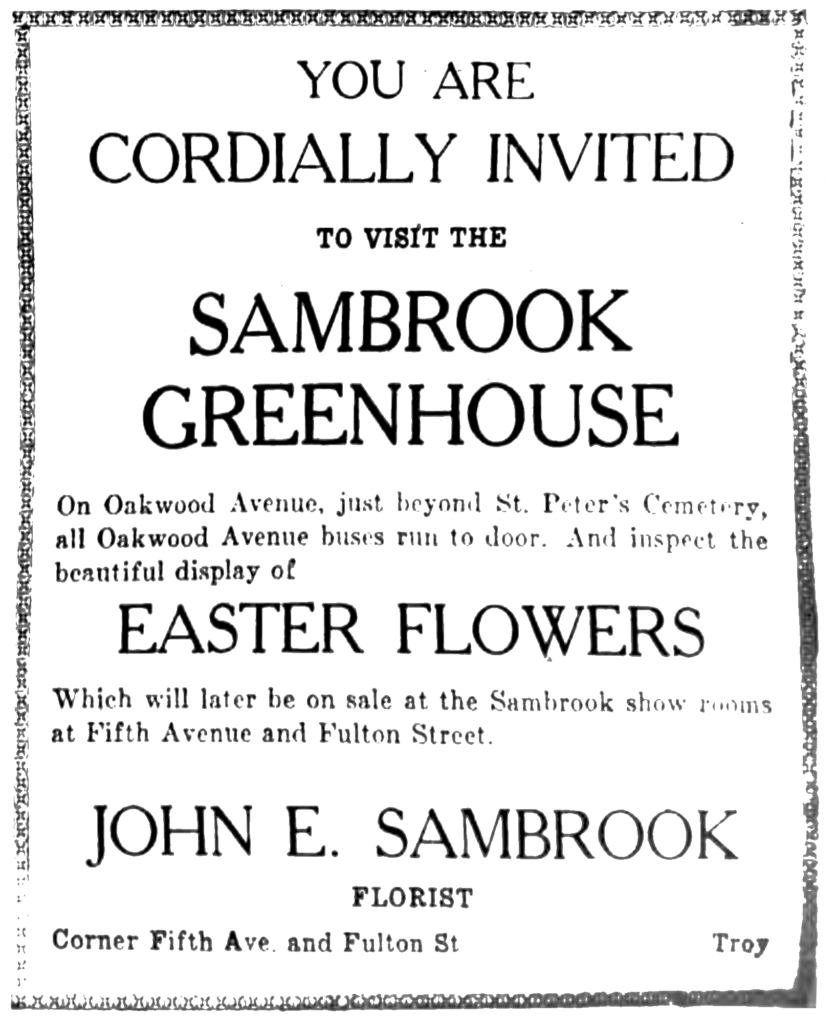 CARNATION OF TROJAN GIVEN HIGH RATINGS
—
John E. Sambrook Takes Blue Ribbons at Two Important Shows.
John E. Sambrook, well-known florist of this city, last night at the New York Flower Show received the blue ribbon award for his cerise-pink carnation, which also received a blue ribbon at the annual convention of the National Carnation Society at Worcester, Mass., last month.
This is a hybrid color carnation which horticulturalists have been seeking to cultivate for years but were unsuccessful. One horticulturalist had devoted much care and time to bring out this rare flower, but was unsuccessful and another who endeavored to produce it abandoned the attempt. But through persistent effort, time and money, Mr. Sambrook now enjoys the pleasant satisfaction of success.
This carnation, when fully grown, has a large bloom and strong long stem. In November and December it is bright red and after February has light shade of magenta pink. Mr. Sambrook will name it Rotary carnation. He now has 4,000 of these plants under cultivation at his nurseries on Oakwood Avenue.
Seven years ago Mr. Sambrook was given a ribbon award for a carnation he cultivated and which he put on exhibition at the International Flower Show in New York. He will exhibit his newest prize at the International Flower Show in New York March 25.
Troy Times. February 14, 1933: 8 col 1

Florists Change Date for Dinner.
The annual dinner of the Albany Florists Club will take place in January for the last time and in the future will be in November, it was decided by the club at a recent meeting.
Fred A. Danker, committee chairman, reported usual inclement weather in January had held down attendance and the change was made to insure greater representation.
Fred A. Danker Jr. was elected president at the meeting which took place at the greenhouses of John Sambrook, Troy, where an inspection of plant and stock was made. Harold Margolis, Albany, was elected vicepresident. Trustees for two years are to be George Nagengast, William Newport and Sidmore Oboice, Albany.
It was decided future meetings should take place the second instead of the first Thursday of the month.
Knickerbocker News [Albany, NY]. December 12, 1938: B2 col 3.