RENSSELAER COUNTY
The Troy Times says that in the water works tunnel at Lansingburgh shortly after 7 o’clock Thursday night, two miners named William J. Sheldon and John Martin had a narrow escape from deathly asphyxia. Fourteen cartridges had been exploded by electricity, leaving five to be set off by the old method of lighting a time fuse. While engaged at this work Sheldon and Martin were overcome by the inhalation of irrespirable gases. Just before losing consciousness one of the men cried for help, and instantly a number of workmen rushed down the shaft, into the tunnel, and dragged the imperiled miners to a place of safety at the moment when the five cartridges exploded, and pieces of the broken rock were scattered in all directions. One of the flying fragments struck and injured the right hand of Thomas Hickler, son of Contractor Hickler. Sheldon and Martin soon recovered, and were taken to their respective homes.
The Troy Times says that the workmen engaged on the large 30 inch main of the water works extension succeeded Wednesday in laying 460 feet of pipe through Congress street, Lansingburgh, and about 400 feet of pipe were laid Thursday. The pipe laid Wednesday weighted 76 tons, and over a ton of lead was used making the joints. The coffer dam to the river has been pumped dry, and as soon as the concrete bottom has been completed the work on the masonry of the inlet pier will be begun. The line for the tunnel has been given, and the tunnel will be speedily completed.
Poughkeepsie Daily Eagle. August 18, 1879: 1 col 3.
Vicinity Notes.
The tunnel of the new water works in Lansingburgh will be completed in about three weeks.
Daily Saratogian. September 23, 1879: 3 col 2.

—Lansingburgh can now boast of two windmills, in active operation, situated on the river bank between the pumping station and the union bridge. The towers are similar in size and construction.
“Lansingburgh.” Troy Daily Times. November 16, 1880: 3 col 3.

A Reckless Bullet.
A case of careless rifle-shooting occurred yesterday afternoon, a bullet passing through a window of the Troy water-works pumping-station at Lansingburgh and over the head of engineer Soucey, who was standing in the room. The shot evidently came from the “battery” at Waterford, and officer Hydorn was sent to that village to investigate.
Troy Daily Times. March 13, 1890: 3 col 7. 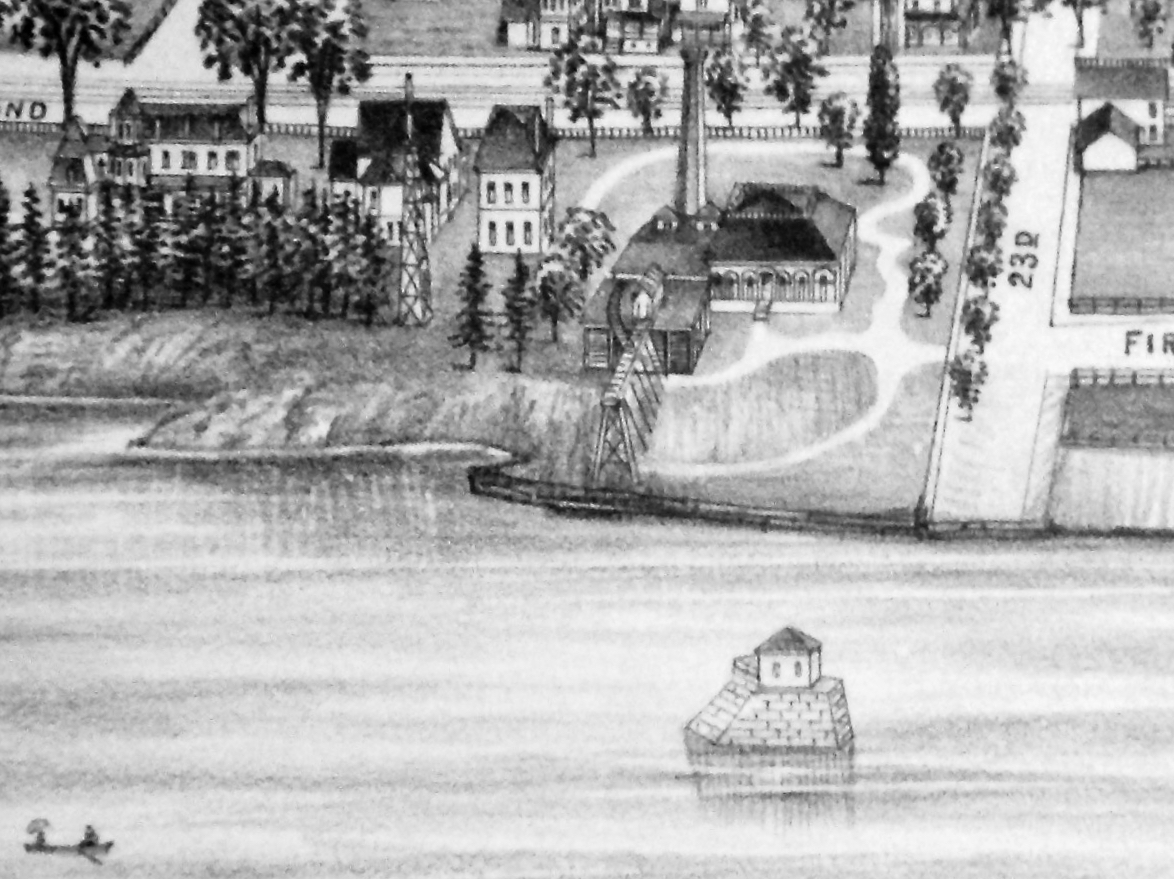 Pumping has been discontinued at the Lansingburgh water-works pumping station, and the machinery will be removed, as the supply from the reservoirs is sufficient.
“Lansingburgh.” Troy Daily Times. February 28, 1893: 2 col 6. [This may refer to a different pumping station?]

THE TUNNEL CLEANED.
—
Completion of Interesting Work at the Pumping Station.
The work of cleaning the tunnel heading from the river to the Lansingburgh pumping station of the Troy water works has been completed practically. The work was done under the supervision of Professor Raymond. Daniel E. Moran, representing Sooysmith & Company of New York, was in direct charge of operations at the scene of the work. Eight years ago this tunnel was cleaned, and it is thought that it will be almost as many more years before cleaning will again be required. The material in the tunnel was of so light a character that it could be forced out by pumps.

How the Work Was Done.
The plan was suggested by Professor Raymond. The essential feature was the sinking of a shaft on the tunnel about midway between the pumping station and the inlet pier, and the removal of a large part of the material through this shaft.
The shaft sinking was expensive, and was accomplished slowly on account of the difficulty in securing experienced drillers. It was found necessary to send to New York for workmen.
The plan consisting of digging a shaft upon the tunnel, and, when the pumps were stopped and the gates closed at the inlet pier, the water was pumped from the well. When the water was sufficiently low in the tunnel the sediment was removed through three shafts, placed upon a scow and taken ashore. Great difficulty was experienced in keeping the pumps at work, because of the large amount of floating sawdust and chips. Five days were required to complete the cleaning.

The Next Time.
In order to supply steam for the hoisting engines and the pumps, water was piped to the boilers at the pumping station from the Lansingburgh water mains. Not quite all the sediment was removed, but Engineer Soucy of the pumping station, who examined the tunnel when it was previously cleaned, stated that the work was about as well done as before and anticipates no trouble from the tunnel filling for several years. The cleaning can hereafter be done much more cheaply by the introduction of a sand pump or an air lift pump into the several shafts, and forcing out the material without stopping the pumping engines.
The cost was about $3,700, which included the sinking of the shaft.
Troy Daily Times. September 16, 1896: 3 col 3.

—A new smokestack has been placed on the Lansingburgh pumping station at [One Hundred] Twenty-sixth Street.
“Lansingburgh.” Troy Daily Times. September 23, 1900: 4 col 5. 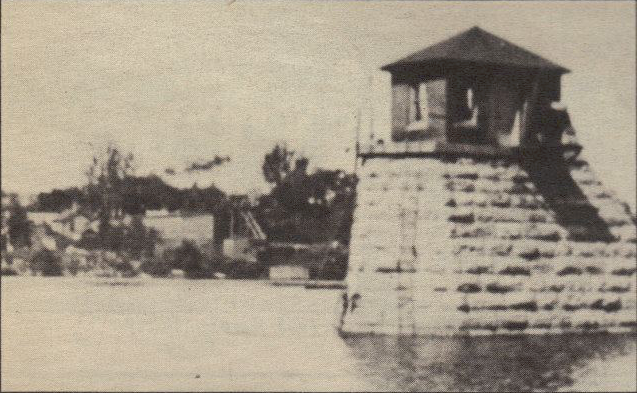 What Is It?
Have you ever wondered what the large stone structure is in the Hudson River?
It’s located around the 123rd Street area and not too far from the Lansingburgh/Waterford bridge. The stone structure is a water pump. It was used to pump water all the way up to the hill side, opposite the river, in Lansingburgh. When the water reached the top it would rush back down to the river. On the way, it would give water pressure to the residents.
The vacant lot on 123rd Street once held a public bath house. This was torn down, but the pipes are still underground.
[Clipping in LHS Collections]