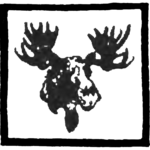 Emblem chosen to represent and distinguish the candidates of the National Progressive party. ~1912-1915.

—The Bull Moose of Lansingburgh will hold their initial meeting to-night at the plumbing shop of J. C. Beck on [One Hundred] Twelfth Street.
“General Mention.” Troy Times. August 20, 1912: 6 col 2.

—The Sixteenth Ward Bull Moose Club has secured permanent headquarters on East Park Place. Philip Murphy and Michael Ring, who are in charge of the new quarters, have arranged for the opening to-night.
Troy Times. October 5, 1912: 12 col 2.

—The Lansingburgh Progressive Club has arranged to meet Wednesday evening, March 4, at Arcanum Hall, Second Avenue. The President, Edward A. Pratt, is making arrangements for several speakers. The organization will probably at this time consider the proposed change of its character from that of a purely political club to one of a social nature. Members of the club largely favor the letting of permanent headquarters with parlors and a game room. It is not unlikely that yearly dues will be decided upon. Up to date the club has been supported entirely by voluntary contributions.
Troy Times. February 17, 1914: 13 col 6.