Tammany Hall, located at the southwest corner of 124th Street and Fourth Avenue (where Testo’s is in 2018), had been a sort of public house also called the Tammany Hotel or the Adamsville Hotel. News items don’t appear to tie it in any way to the political organization of the same name, beyond local Democrats holding some meetings there. For part of 1860-1861 it became the Electropathic Infirmary of Mrs. Doctress Susan A. Nolan.

The Tammany Hall or Hotel name lasted from the 1840s into the 1870s. Overlapping that a little, from 1868, if not earlier, up to 1895 it was known as Sloan’s Hotel after its owner Alexander Sloan.

Tammany Hall.
We were about penning a few lines in commendation of this new candidate for public favor, when a friend handed us the following and as he speaks from experience, we let him have his say:

[Foreign Correspondence of the Democrat.]
Tammany Hall, Adamsvile June 6th 1849.
Mr. Editor:—I arrived here in the last train this Eve. Having heard this house highly spoken of, I concluded I should be disappointed when I ar- [sic] here, as is usually case, but my brightest expectations were more than realized. The House is beautifully located in the extreme north end of this place. During the day and evening, while in the “‘Burgh” the air is close and sultry we enjoy a delightful breeze up here, and from the window I have an extensive view of the Hudson, Waterford, and Lansingburgh.
The rooms of the house are large, airy, and beautifully finished. I admire much the taste displayed in the furnishing of the rooms on the first floor. The room intended for the “Exclusives,” or those who would be exclusive while imbibing ‘a Julip,’ is supplied with lounges and all thing neccessary to man’s enjoyment of a ‘Shirry Cobler as is a Cobler.’
The Ice Cream Saloons, of which there are three, are also furnished in first style, and the Cream served up in them is equal to “Thompsons N.Y.” [i.e. James Thompson’s Confectionary Store and Ice Cream Saloon in Manhattan] It’s a mystery to me where, “Thomas” finds such Cream in Rensselaer county. A Piazza on the first and Balcony to the second floors, extends along three sides of the building, adding greatly to the general appearance of the building and the comfort of the guests, to say nothing of the capital lounge it affords for smoking a good segar, which may be obtained of ‘Thomas’ by asking for ‘those in the basket.’ The retired and beautiful location of this Hotel must attract many visitors. Every thing about the establishment is new, except the Maderia, which is 1812. One word more and I will conclude. If you are partial to remarkably good cheese, CALL UP.
MR. CUTTLE, JR.
Lansingburgh Democrat. June 7, 1849: 2 col 5.

The verandah at the Tammany Hall is a love of a place, and when the line of Cabs is started which will set down passengers at its door, many of our citizens whose ignorance of the rapid growth of Lansingburgh can be attributed to their indolence, will have no longer an excuse for not visiting it. A road to intersect the Brunswick road at the top of the hill, will soon be opened, and thus will enable a new class of customer to find their way to Adamsville. We imbibed a delicious lemonade at Tammany Hall last week, such an one as only Thomas knows how to make.
“Improvements.” Lansingburgh Democrat. June 28, 1849: 2 col 1.

☞ We understand that a great ball is on the tapis at Tammany Hall. So long as dancing is all the rage, we presume that this will be one of the best balls of the season. Thomas will be on hand with a game supper and the tallest oysters and the company will be treated to the biggest turkeys.
Lansingburgh Democrat. December 13, 1849: 2 col 3.

☞ The public’s friend, Thomas A. Cory, has resumed his old place at Tammany Hall, where he is prepared to administer to the creature comforts of all his friends, and they are legion.
Lansingburgh Democrat. April 25, 1850: 2 col 4.

☞ ADAMSVILLE BALL.—This grand affair, which has been for some time in contemplation is to come off on Friday next. Those who are fond of the health promoting exercise of dancing will find ample accommodation for their enjoyment at Tammany Hall on this occasion. No pains will be spared by the landlord to render everything pleasant and agreeable for those who attend.
Lansingburgh Democrat. May 23, 1850: 2 col 2.

☞ The Adamsville Hotel is closed. Fitzclarke has made his fortune and retired.—Who’s the next lucky customer?
Lansingburgh Democrat. May 22, 1856: 2 col 4.

☞ ADAMSVILLE HOTEL.—Our whilom police friend, Supervisor Bowman, has, we learn, opened the Hotel at the junction in Adamsville (just north of Lansingburgh,) and will keep it open during the summer months, for the accommodation of pleasure-seekers from this city and elsewhere. The house is pleasantly located, at the end of a delightful drive, and is furnished with every desirable facility for the accommodation of guests. Frank himself is well known as a prince of jolly fellows, and those who visit him in his new location will be sure of receiving every attention that can conduce to their comfort.
Troy Daily Times. June 10, 1858: 3 col 4.

☞ CLOSED.—A Jury summoned under the direction of the Trustees, was called out last week and closed up that part of the old Northern Turnpike [Northern Drive] lying between the residence of Simon VanDerCook [at the intersection of State and Washington, now 2nd Avenue and 123rd Street], and the Tammany hotel. It has since been fenced in, and the lines of the blocks squared. We understand that certain dissatisfied parties intend to litigate the proceedings and attempt to open it again, and have raised a fund for that purpose.
Lansingburgh Weekly Chronicle. June 13, 1865: 3 col 1.

☞ SALE.—Mr. John H. Worden will sell his personal property at public vendue at the Tammany Hall premises on the morning of the 8th instant. A good chance to purchase.
☞ For terms see hand-bills.
Lansingburgh Weekly Chronicle. February 6, 1866: 3 col 5. 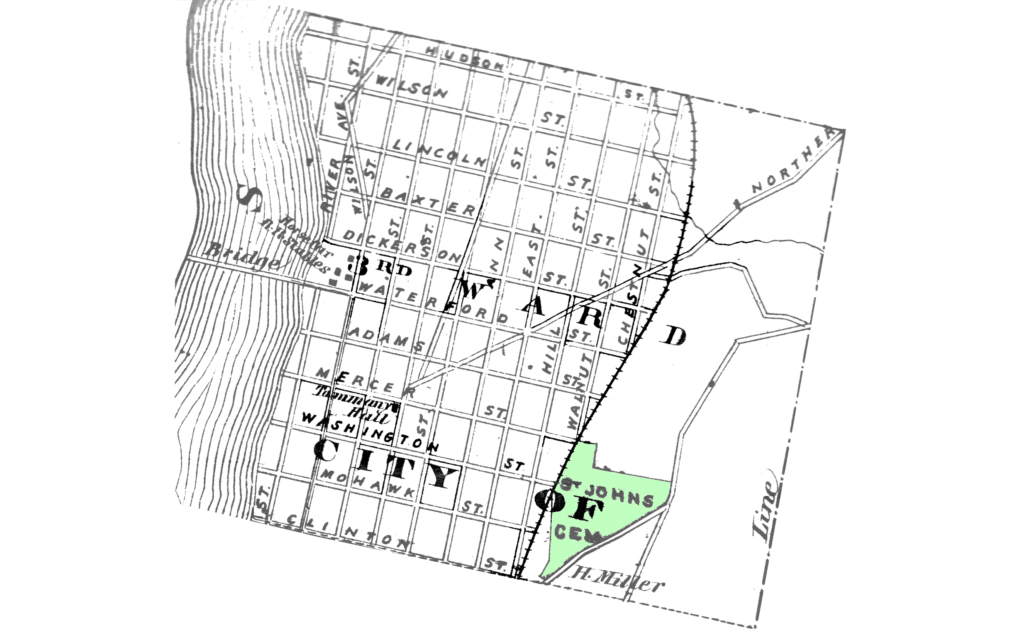 —The old road leading from Sloan’s hotel to Speigletown is to be closed up by Highway Commissioner Groesbeck is at work on it now.
“Village Notes.” Lansingburgh Courier. June 9, 1876: 3 col 1.

Foot-Race Postponed.
Th foot race over the shortest course from the railroad barns to Sloan’s hotel, which was to have taken place on Thursday, was postponed because of the bad traveling. The course had been changed, being now from the barns to Hotel de Flagler. The judges and referee remain the same and the time will be duly announced by means of posters throughout the village.
Lansingburgh Gazette. February 14, 1880: 3 col 3.

—A handsome Cleveland and Hendricks banner was raised at Sloan’s hotel, corner of John and Mercer streets Wednesday evening under the auspices of the Democratic Central club. The Hon. G. R. Hitt of Albany and the Hon. Charles E. Patterson of Troy were the others.
“Political.” Lansingburgh Courier. September 20, 1884: 3 col 2.

—At noon Thursday the board of trustees met at Sloan’s hotel in regard to the grade on the street in rear of Pine’s property.
“Village Notes.” Lansingburgh Courier. March 14, 1885: 3 col 2.