☞ A PUBLIC PARK IN LANSINGBURGH.—Messrs. Whipple and Powers, of Lansingburgh, leading citizens, have just made an offer to the village, which we hope to see accepted by the Trustees. They propose to donate a square of ground, situated on the East side of State street [Second Avenue], and embracing several acres, for a public park.—The site is an eligible one, and in future years, when Lansingburgh attains the proportions of a city, as it will certainly do, the advantages of this park will be fully realized. We trust that the generous offer of Messrs. Power and Whipple will be accepted, and the park become one of the institutions of the ‘burgh.
Troy Daily Times. May 13, 1863: 3 col 3. 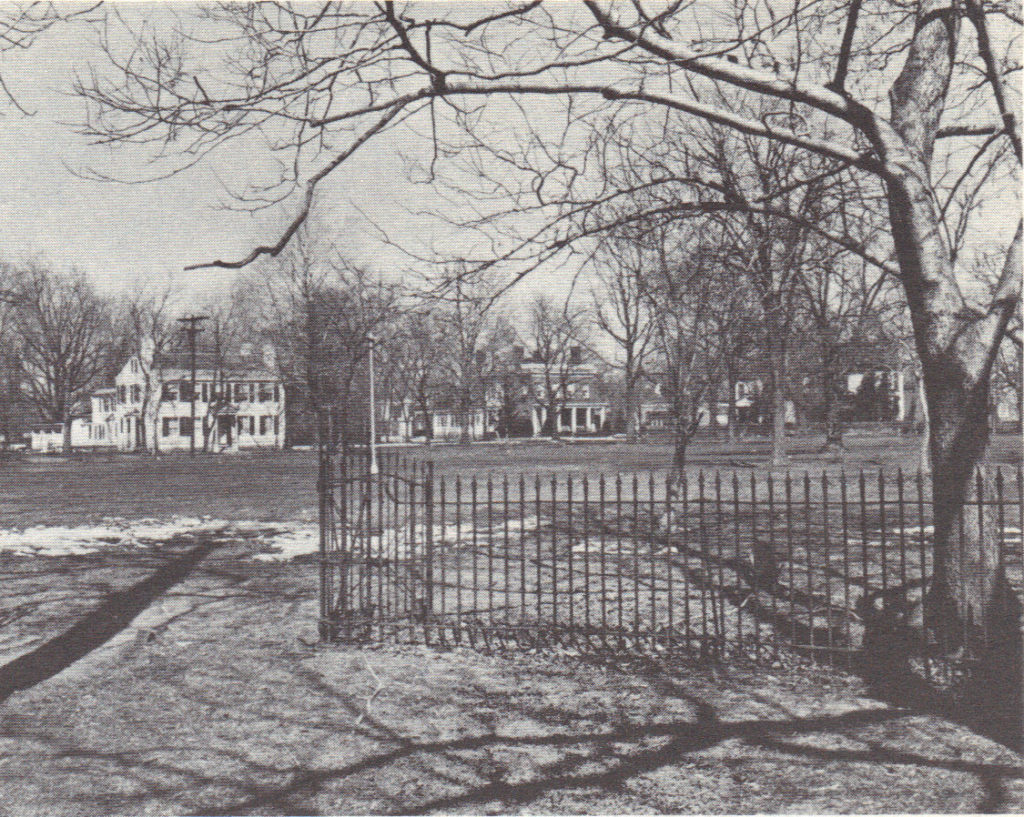 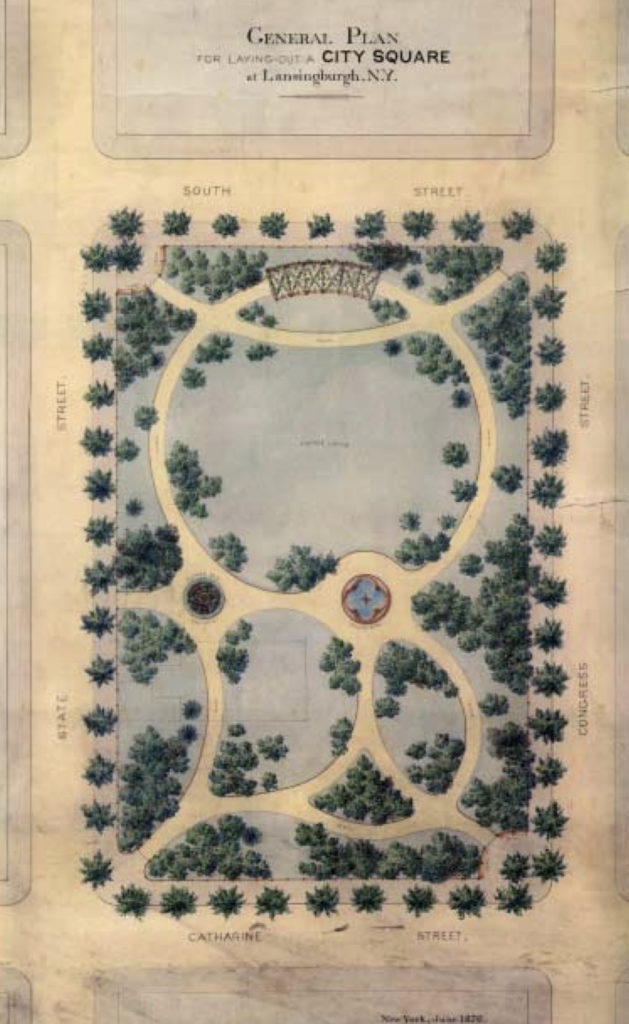 “General Plan for Laying Out a City Square at Lansingburgh, N. Y.” June 1876 by Jacob Weidenmann

Several samples of iron fence have been set up on the State street side of the Powers park, the object being to enable Mrs. D. Powers to make a selection therefrom and place an order. A vast amount of labor has been performed in the park, which is very attractive, and the erection of a beautiful fence will make it a charming spot. Citizens are loud in praise of Mrs. Powers and her generous action in providing means whereby pleasure can be derived in viewing these find grounds. Should the effort to improve the public grounds be successful, Lansingburgh residents will have just cause to feel proud of their beautiful village and numerous parks.
“Lansingburgh.” Troy Daily Times. April 17, 1884: 2 col 4.

—The Powers park on State street has been placed in splendid condition. A finer breathing-spot cannot be found for miles around.
“Lansingburgh.” Troy Daily Times. May 15, 1885: 2 col 4.

The Gauter property, near the corner of State and Catherine streets, has been sold by Samuel Bolton, jr., to Mrs. Deborah Powers. The terms are private. The house on the premises will be removed to the corner of Catherine and State streets and the space it occupied will be included in the Powers park. This property having come into the hands of the Powers family enables them to extend the park as they have long wished, and it will be completed next season.
“Lansingburgh.” Troy Daily Times. November 15, 1889: 3 col 5.

To Open the Park.
Albert E. Powers and Nathaniel B. Powers have decided to open for the first time Wednesday, August 5, the park recently presented to the village of Lansingburgh. That day will be the one hundred and first anniversary of the birth of their mother, Mrs. Deborah Powers whose wishes the sons carried out in presenting the park. The grounds will be open from 2 o’clock until dark, and on each Sunday afternoon during the summer and autumn the park will be opened between the same hours.
Troy Daily Times. August 1, 1891: 3 col 6.

—The opening of the Powers Memorial park, recently presented to the village by Albert E. Powers and Nathaniel B. Powers, occurred this afternoon, the grounds being thrown open from 2 o’clock until dark. To-day is the one hundred and first anniversary of the birth of Mrs. Deborah Powers, whose wish it was that the park be given to the village.
“Lansingburgh.” Troy Daily Times. August 5, 1891: 3 col 4.

Early last summer, when the beautiful plat composing the block between Second and Third avenues and Tenth and Eleventh streets, Lansingburgh, was presented to the village by Albert E. Powers and Nathaniel B. Powers, in accordance with the wish of their mother, the late Mrs. Deborah Powers, that the village might have a park, it was announced that the opening to visitors would be experimental, and whether or not the park would be made public during the lifetime of the donors was conditional upon whether or not proper appreciation of the beautiful grounds were manisfested. Each Sunday afternoon until autumn the park was thrown open, and it was the strolling-place of many admiring visitors. In a conversation one day this week Albert E. Powers said: “The opening of the park to visitors was highly satisfactory, as had been the expectation from the time the carrying out of our mother’s wish was undertaken. There have been many visitors, and I have yet to learn of any act that would be displeasing. From the keeper in charge I have had no complaint of the deportment of any visitor, and I think the grounds have been enjoyed. Our anticipations have been fully realized, and it is a source of much gratification to know that so much enjoyment has been given. Any intentions we may have concerning the park are entirely in the future, but during the next summer seats will be placed and the grounds thus be made still more attractive. The park may also be opened each Saturday afternoon. That the park is appreciated we are assured, and our wish is fulfilled.” Too few villages are given so beautiful grounds as a place for recreation, and that “The Powers Memorial Park” will not fall short of the worthy object of the noble and generous mind that conceived it and the devoted sons who fulfilled their mother’s wish, is sure.
“Wayside Whispers.” Troy Daily Times. November 28, 1891: 7 col 4.

The law committee reported that it was unable to find any deed from A. E. and N. B. Powers to the village of their park between Second and Third avenues and Tenth and Eleventh streets. The deed must have been lost, for the Messrs. Powers acknowledge the execution of such a deed. The deed has never been placed on record. Another deed will probably be drawn. The Messrs. Powers will formally relinquish possession of the park June 1 and the village will take the property without reservation.
“Lansingburgh.” Troy Daily Times. May 28, 1895: 2 col 4.

—The Powers memorial park is open to the public. Some seats would be acceptable.
“Lansingburgh.” Troy Daily Times. April 16, 1896: 2 col 3.

—Street and Park Commissioner John Warnock has been given a number of elm and chestnut treets for the upper park by Nathaniel B. Powers. Commissioner Warnock will place the benches in the Powers park to-day.
“Lansingburgh.” Troy Daily Times. May 4, 1896: 4 col 2.

Mr. Gillespie stated that he had been requested to ask the Board to have an electric light placed in the centre of Powers Park. The matter was referred to the committee on lights.
“Lansingburgh; The Village Board’s Meeting.” Troy Daily Times. April 11, 1900: 4 col 3.

—For some time the plants and shrubbery in Powers Park have been damaged and torn up by malicious boys during the night. Several complaints have been made, but the police have been unable to catch any of the culprits. Herafter an officer in citizen’s clothes will be stationed in that locality.
“Lansingburgh.”Troy Daily Times. May 19, 1900: 4 col 4.

Mr. Green offered the suggestion that the sidewalks about Powers Park should be flagged and the fence surrounding the park and the fountain in the village park should be painted. The suggestion will be taken up at the next regular meeting.
“Lansingburgh; Meeting of the Village Trustees.” Troy Daily Times. June 13, 1900: 6 col 2.

Bids were received for the painting of the fence about Powers Park and the fountain in the village park, and Trustee Green was empowered to investigate the bids and report at the next meeting. The committee on roads, streets and alleys was empowered to have the iron railing on the retaining wall which leads to the Cohoes bridge painted.
“Lansingburgh.” Troy Daily Times. June 30, 1900: 4 col 4.

The contract for painting the fence around Powers Park was awarded at $77 and the fountain in the Village Park at $5 to George W. Griffith.
“Lansingburgh.” Troy Daily Times. July 11, 1900: 4 col 3.

—In Police Court this morning a youth of thirteen years was arraigned before Magistrate Hearman on the charge of playing football in Powers Park. The boy was lectured and discharged.
“Lansingburgh.” Troy Daily Times. October 8, 1900: 4 col 3.

—Since the supply of money in the village treasury has become exhausted the services of the keeper of Powers Park were dispensed with. The gates of the park are left open continuously. Both day and night access to the park is easily obtained. Some action should be taken to have the gates closed at a reasonable hour by the police.
“Lansingburgh.” Troy Daily Times. November 5, 1900: 4 col 3.

HOW DESPERATE CAN YOU BE?—Residents in the Powers Park section of Lansingburgh were appalled Thursday evening on returning from their daytime jobs to be greeted by these chaotic scenes. In previous days they had reluctantly agreed that snow removal crews had to put somewhere their tons of the white stuff taken from the section’s narrow streets. And Powers Park at least provided unused available space. Not that neighbors approve of the wrecked fence (a section of which is visible in the right hand photo) or the tilted flag pole. But, until yesterday, the block of Third Avenue south of 111th Street had been clear, curb-to-curb. Who ordered the dumping of mountains of snow back into the street—enforcing one-way travel at the driver’s risk—remains to be disclosed! (Photos by Harry McKenna)
Times Record. January 23, 1970: 15.