One of the tributary kills to the Hudson River running through the Village of Lansingburgh and Batestown, and forming the approximate boundary line between Lansingburgh and Troy up until the annexation of Batestown by Troy.

[138 blank; 139] Appeared before me, Rot. [Robert] Livingston, secretary of Albany, colony of Renselaerswyck and Schaenhechtady, in presence of the Honorable Mr Cornelis van Dyck and Mr Dirk Wessells, magistrates of said jurisdiction, Robert Sanders, who declared that he conveyed and made over in true, rightful and free ownership to and for the behoof of Pieter Pieterse van Woggelum a certain piece of woodland into which extends a certain swamp,” the same being the whole of the said grantor’s interest on the south side of Piskawen kill,” which he conveys to said Pr. Pieterse, so that said kill is now their division line; which he, the grantor, does by virtue of the patent to him granted by the Honorable Governor General Sir Edmund Andross, dated the 22d day of March 16[79/80] and that free and unincumbered, without any charges thereon or issuing out of the same (saving the lord’s right), and without the grantor’s making any further claim thereto, acknowledging that he is fully paid and satisfied therefor, the first penny with the last, therefore giving plenam actionem cessam and full power to the aforesaid Pieter Pieters van Woggelum, his heirs, successors or assigns, to do with and dispose of the aforesaid piece of woodland lying on the south side of Piskawen kill, as he might do with his own patrimonial estate and effects, promising to warrant and defend the same against all persons from all lawful liens, claims and incumbrances and further nevermore to do, nor cause anything to be done, contrary hereto in any manner, binding himself thereto as by law provided. Done in Albany, the 19th of December 1681.
ROBBERT SANDERSZ
Cornelis van Dyck
Dirck Wesselsz
In my presence, ROT. LIVINGSTON, Secretary
Van LAer, A. J. F., ed. Early Records of the City and County of Albany and Colony of Rensselaerswyck. Vol. 2. Albany, NY: U State of NY, 1916. 150-151.

The proprietors of the Conduit Company of Troy, it seems, supplied the inhabitants with water until the construction of a reservoir, in 1833, on the Piscawen Kill. On the petition of Stephen Warren, Le Grand Cannon, Philander Wells, and other citizens, the Legislature, on April 18th, 1829, passed the act incorporating the Troy Water Works Company, with a capital of $250,000. On April 22d, 1830, the Common Council appointed the mayor, George Tibbits, and three aldermen, Townsend McCoun, Stephen Ross, and Jeremiah Dauchy, to explore “for a suitable supply of good water for the use of the city, and cause the necessary surveys to be made, and to devise a plan, and to make an estimate of the expense of bringing the same into the city, and to report the same.” William Roberts, the city surveyor, having made surveys of the springs, on the farm of Benjamin Gorton, east of the city, along the Hoosick Road, and of the Piscawen Kill, north of it, the committee, in the following summer, presented its report, with a map of the surveys, to the Common Council.
The Troy Water Works Company having consented to surrender its rights to the city, an act was passed by the Legislature on March 20th, 1832, permitting the sale of the property, which was shortly afterward purchased for the small sum of $174.34. The “Water Works Committee, George Tibbits, mayor, and Townsend McCoun, Stephen Ross, Calvin Warner, Jeremiah Dauchy, Benjamin M. Wilson, and Ebenezer Wood, aldermen, having received the property, proceeded to obtain the necessary land and the water privileges of the Piscawen Kill, in order to construct a reservoir on the stream, where now is the distributing reservoir, west of Oakwood Avenue. In the spring of 1833, the construction of a dam and reservoir was begun, which, on their completion in 1834, had a capacity of 448,838 gallons of water, which was distributed through the city by about four miles of pipes. Not long afterward, the second and third reservoirs were constructed, having an aggregate capacity of 1,000,000 gallons. In 1843 and 1853, other reservoirs were constructed on the Piscawen Kill, west and east of Oakwood Avenue. The total cost of the Troy Water Works, on March 1st, 1848, was $160,496.37. There were then 59,497 feet of pipes through which water was supplied the inhabitants.
Weise, Arthur James. Troy’s One Hundred Years, 1789-1889. Troy, NY: William H. Young, 1891. 167.

The Waterworks committee were authorized to erect dams or reservoirs above the principal reservoir on the Piscawan Creek, if in their opinion the supply of water will be thereby increased, at an expense not exceeding $1000. They were likewise requested to examine and report how a more permanent supply of water can be obtained, and the expense thereof, in reference to a supply from the river at the dam, as well as from the stream south of the city called Morgan’s Mill stream.
“Common Council Proceedings.” Troy Daily Whig. August 20, 1838: 2 col 3.

Mr. Dauchy from the water-works committee reported an arrangement made with Titus Eddy, for the privilege of damming the Piscawin Creek, above the present reservoir, to ensure an additional supply of water in dry seasons,a nd submitted the form of the conveyance proposed to be given by Mr. Eddy, to the corporation, which was approved of.
“Common Council Proceedings.” Troy Daily Whig. July 10, 1839: 2 col 3.

Ald. C. Eddy presented a petition from Capt. Wright, of Fort Edward, late of the One Hundred and Sixty-ninth regiment, for relief and compensation for alleged damages received while walking from the depot to Camp Corcoran, in August last, in consequence of having fallen into the Piscawen creek, near the present entrance to the skating park. The petitioner claims that he received severe injuries, was incapacitated from duty, gave up his commission and lost the monies that he had expended in raising his company. [Referred to the law committee.
“Common Council Proceedings.” Troy Daily Times. March 20, 1863: 3 col 2.

MISCELLANEOUS.
By Ald. Hotchkin— […]
Resolved, That the committee on sewers be and they hereby directed to examine and report to this Board, at its net regular meeting, th feasibility of building a sewer to connect with the Piscawen creek, at or near the corner of Turner’s Lane and Vail avenue, through Turner’s Lane to the Hudson river, to prevent in future the great damage done to private property. [Adopted.
“Common Council Proceedings.” Troy Daily Times. August 22, 1869: 2 col 5.

☞ NARROW ESCAPE FROM DROWNING.—Yesterday a lad named Robert Feyl, son of Anthony Feyl, the Tenth Ward baker, while playing upon a cake of ice int he Piscawen creek, crossing River street above the state dam, fell off the ice into the water. He would have drowned, had not two boys jumped in and rescued him. We regret we have not their names. Young Feyl was almost exhausted when he was taken out by his heroic companions.
Troy Daily Times. December 15, 1869: 3 col 4.

PROCEEDINGS OF THE CANAL BOARD.
—
At a meeting of the Canal Board, held at the Canal Department, the 10th day of July, in the year 1877: […]
The Auditor presented the following petition:
Troy, N. Y., July 3, 1877.
To the Honorable Members of the Canal Board of the State of New York:
Gentlemen — The Board of Water Commissioners of the city of Troy respectfully petition your honorable body to permit them the construction of a sewer eastward and opposite the Sloop Lock in Troy. Having erected, at no little expense, the necessary pumping machinery, above the channel of the Hydraulic canal, by which to take water therefrom for the use of the inhabitants of Troy, they, your petitioners, find that the said water is injuriously contaminated by the commingling water of the Piscawen Kill.
The plan for the drainage of the Piscawen creek is herewith inclosed, which your petitioners have duly considered and adopted. The line of excavation is forty (40) feet east of the north, and thirty-six (36) feet east of the south gate of the lock. The point of delivery is one hundred (100) feet south of the lower gate, and at a height with the present surface of the water below the State dam. The line of the proposed excavation being so distant from the lock, and the greater part of the way running through a stratum of Hudson river shale, the contemplated work will, therefore, in nowise affect or injure the stability of the State property. Hence your petitioners pray that the necessary permission be granted them for the construction of the said sewer.
Respectfully,
JOSEPH FAYLES, Chairman Board of Water Commissioners.
Referred to the State Engineer.
Proceedings of the Canal Board. Albany, NY: Weed, Parsons & Co., 1877. 185.

—At the request of Alderman Hartwell of the thirteenth ward Mayor Fitzgerald will give a hearing at 11 o’clock Monday morning, at the mayor’s office in the city hall, to citizens of the ward who complain of the bad condition of the Piscawenkill, between Vail avenue and North Fourth street. Residents of the ward say they have brought the matter to the attention of the health authorities, but without any good results. The common council has ordered the stream west of the avenue filled in, but this has not been done. The mayor will consult the city attorney with reference to the law on the subject.
Troy Daily Times. June 12, 1886: 3 col 2. 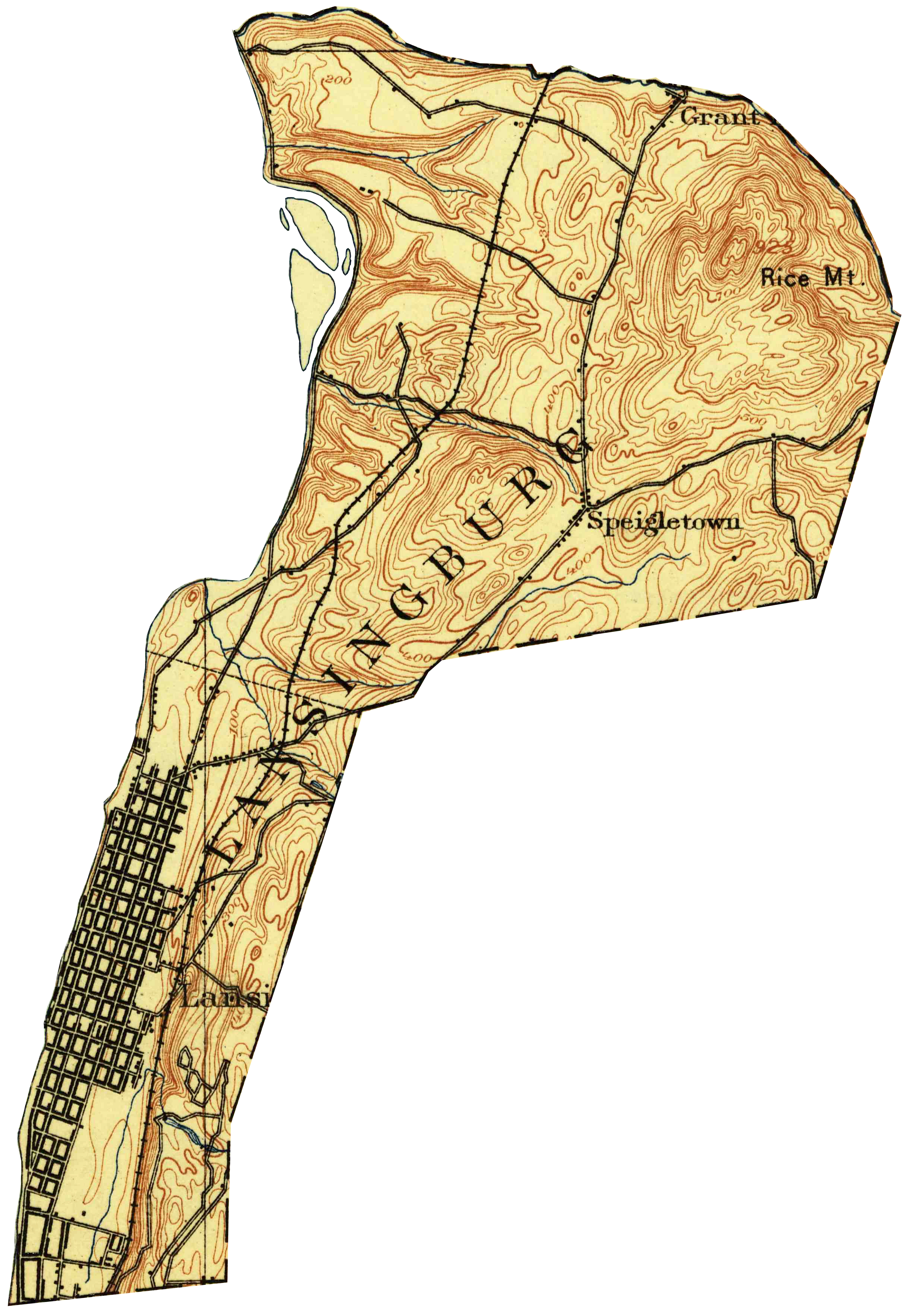