George Tracy Marsh (1875-1945), Lansingburgh-born author of works often set in Canadian wilderness. Some of his poems and stories were illustrated by many well-regarded artists including Maxfield Parrish, Newell Convers Wyeth, Frank Earle Schoonover, and Clifford Warren Ashley. (One of N. C. Wyeth’s paintings for George Marsh’s “The Quest of Narcisse Lablanche” sold in 2011 for $80,000..)

Lansingburgh.
While playing on the dock at the foot of Van Schaick street [102nd Street] yesterday afternoon a boy, Stephen Fagg, fell into the water. Had it not been for the presence of Freddie Draper and George Marsh, Fagg would have drowned.
Troy Daily Times. May 8, 1885: 2 col 4.

George T. Marsh, “Swamp” Marsh, as he used to be familiarly known before he was graduated with the Yale class of ’98, is in the Harvard law school. He was a substitute tackle for the Yale eleven three years, and was a crew substitute for the same length of time.
“Yale Men at Harvard.” Boston Herald. December 18, 1898: 34 col 7..

The December SCRIBNER is notably a Christmas number this year, for three of the stories are stories of Christmas day […]
A very notable feature of the number are four paintings of Indians by N. C. Wyeth, reproduced in colors, typifying the four seasons. They are accompanied by verses, “The Moods,” written by George T. Marsh.
“The Christmas ‘Scribner.'” The Book Buyer. December 1909. 218-219.

Scribner’s for August […] The frontispiece by Maxfield Parrish, reproduced in color, illustrates “The Errant Pan,” a poem by George T. Marsh, of a well-known Troy family.
“The Magazines.” Troy Times. August 9, 1910: 3 col 1. 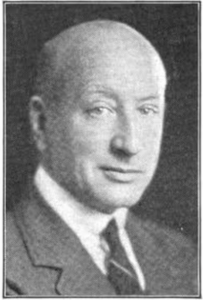 BOOKSELLERS’ LEAGUE CANOES DOWN ALBANY RIVER WITH GEORGE MARSH
The November Dinner of the Booksellers’ League of New York City was made an affair of more than usual interest by George Marsh, author of “Whelps of the Wolf,” recently published by the Penn Publishing Co.
Mr. Marsh’s talk was of the particular period in his adventurous life which furnished the inspiration and the groundwork for his now famous story.
Armed with a battery of slides illustrating every phase of the trip, and with the same point of view that endowed his story with its charm, Marsh took his listeners through 1500 miles of wilderness, much of it virgin territory for white men.
When he had concluded his talk it is safe to say that many of those present had gained a new idea of the vast land which much of the present-day fiction has pictured as abounding in beautiful heroines, scarlet-coated Mounted Police and villainous halfbreeds.
It was an entirely different story—when told by one who had been there and had blazed a path to Hudson’s Bay through a region where much of men’s lives is a struggle for existence against starvation and the pinch of cold.
It is too bad that a selected group of scenario writers might not also have been present.
Bookseller & Stationer 57(11). December 1, 1922. 5, 16.

Professor White inquired the number of students who read and don’t read fiction. He told the value of a recent novel which was written by George Marsh. The novel was written about the people who live in Central Canada near Hudson Bay. The title of the book was “The Whelps of the Wolves.” Professor White recommended this book to be read by every one who likes lively life and good spirit.
“Lansingburgh; High School Notes.” Troy Times. March 12, 1924: 3 col 4.

GEORGE T. MARSH, AUTHOR, DIES AT PROVIDENCE HOME
—
Lansingburgh Native Also Became Prominent as Attorney, Public Official
Private funeral services will be held at Providence, R. I., for George T. Marsh, nationally known lawyer and author who was born in Lansingburgh. Mr. Marsh was the son of the late Mr. and Mrs. P. J. Marsh of Lansingburgh and brother of the late Dr. J. P. Marsh. He died Friday in Providence, R. I., after a short illness.
Best known in Rhode Island in recent years as a public official, Mr. Marsh served as member and chairman of the old Providence Board of Public Safety and later as member and chairman of the board of trustees of State College.
He was known nationally as a writer of adventure fiction, most of it with the far north of Canada as a locale. His last published book, however, “Ask No Quarter,” published last spring, has Rhode Island and the adventures of a privateer as its theme. Mr. Marsh has had a full dozen volumes published since 1921, in addition to numerous short stories appearing in magazines.

Had Great Love for Dogs.
His tales of the North were based on his personal experiences hunting and fishing in that region as a young man, combined with a love of dogs which included both the huskies of sub-Arctic and the airdales which sprawled about his home.
Mr. Marsh was born Aug. 9, 1875, at Lansingburgh, son of the late James and Lelia E. (Tracy) Marsh. He wrote that he loved most of his boyhood in canoe and shell on the Hudson, “but slept and ate at home.”
He prepared for college at Williston Academy, later entering Yale University, where he was captain of the freshman crew and later going to Poughkeepsie and the Henley Regatta with the Yale crew. He was graduated from Yale in 1898 and from the Harvard Law School in 1901, beginning the practice of law in Providence soon after.

Given Posts of Rhode Island.
He served in the General Assembly during 1910 and 1911 as a Democratic member of the House from the Second Providence District, numbering among his colleagues the late R. Livingston Beeckman, later governor; Frederick S. Peck, later state finance commissioner, and others who later became prominent figures in Rhode Island’s political life.
In 1923, he was nominated a member of the Metropolitan Park Commission by William S. Flynn, former governor, who the following year named him for the Public Utilities Commission. In both instances the nominations were rejected by the Republican Senate.
Mr. Marsh was named a member of the Public Safety Commission, state body formed to administer the police and fire departments of the City of Providence, in 1931, and served as chairman during most of the period till the board was abolished by the General Assembly in 1935. He won reelection to the board by the Senate in 1934, defeating the late Mayor James E. Dunne, who had been nominated for the post by Gov. Theodore Francis Green.