☞ OAKGROVE HOUSE.—Mr. A. Winnie has opened the “Oakgrove House” on the Oakwood Avenue, some three-quarters of a mile above Hoosick street. The House is a very neat affair, built of brick, and furnished in a tasty and convenient manner for the entertainment of company. Everything is new, neat and tidy. The grounds embrace upwards of five acres, commanding some of the most picturesque views in this vicinity, with swings, tables and other accompaniments in the beautiful grove, for summer pic-nics and social cheer. There is not a more lively spot in this vicinity—no place where one can go for recreation, and enjoy so much the delights of a rural retreat, at the same time having at command all the appliances for rational enjoyment and health-giving sport and exercise, as at this beautiful resort. We think that, in behalf of all who seek relief from the sultry heat and business plodding of city life, we may thank Mr. Winnie for establishing this cheerful and well-ordered place for summer resort, so near at hand for the accommodation of all, and within the city limits. It compensates, in part at least, for the great want of the city—a public park. In fact, the grounds constitute a park as splendid as the sun of Heaven ever shone upon.
—Mr. Winnie will be glad to see and heartily welcome respectable company; he will admit no other. This resolution is not set forth merely as ‘a blind’ to the public; it will be strictly enforced. Vagabonds and low characters shall not set foot upon the premises; the proprietor makes this pledge to the public. Good company is solicited, and all of this class who come will be treated with politeness and generously welcomed. Go out and see what Mr. Winnie has done and is doing to carry our good citizens through the summer months with pleasant enjoyments, happy gatherings, and with the relief of a cool, hospitable and delightful summer resort.
Troy Daily Times. June 22, 1858: 3 col 2. 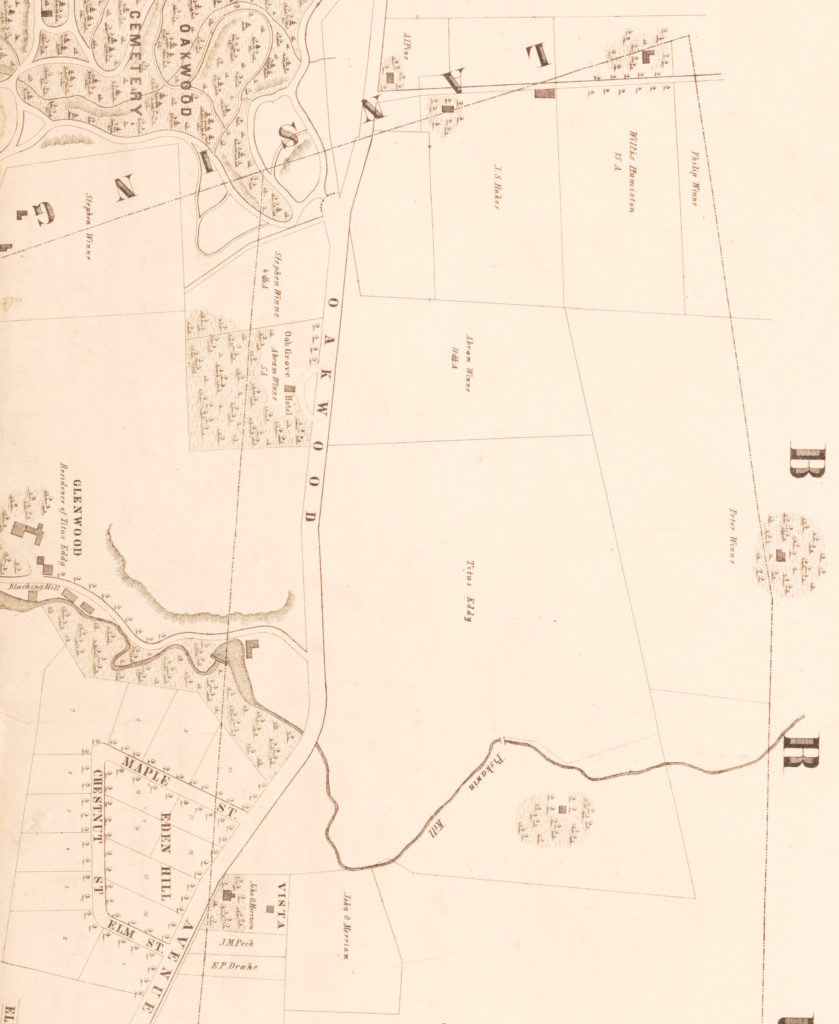 ☞ SUNDAY SCHOOL PIC-NIC at WINNE’S GROVE.—Yesterday the Universalist Sunday School and friends had a gathering at Winne’s Grove, near the East gate of the Oakwood Cemetery, where they enjoyed a grand time. The party was a mixture of young and old, the day all right, the amusements varied, refreshments ample, and the proprietor of the Grove, ex-Ald. Winne with his assistants, did their part well to make all happy. His hotel, the “Oak Grove House” is becoming a fashionable resort about these days.
Troy Daily Times. August 11, 1858: 3 col 2.

THAT TURKEY SHOOT at Winne’s Oakwood Grove to-morrow, will not be forgotten. It will be a good old fashioned Turkey Shoot, and ‘sharp shots’ will all be there. Commences at 10 A. M., and continues all day.
“Business Notices.” Troy Daily Times. November 17, 1858: 3 col 4. 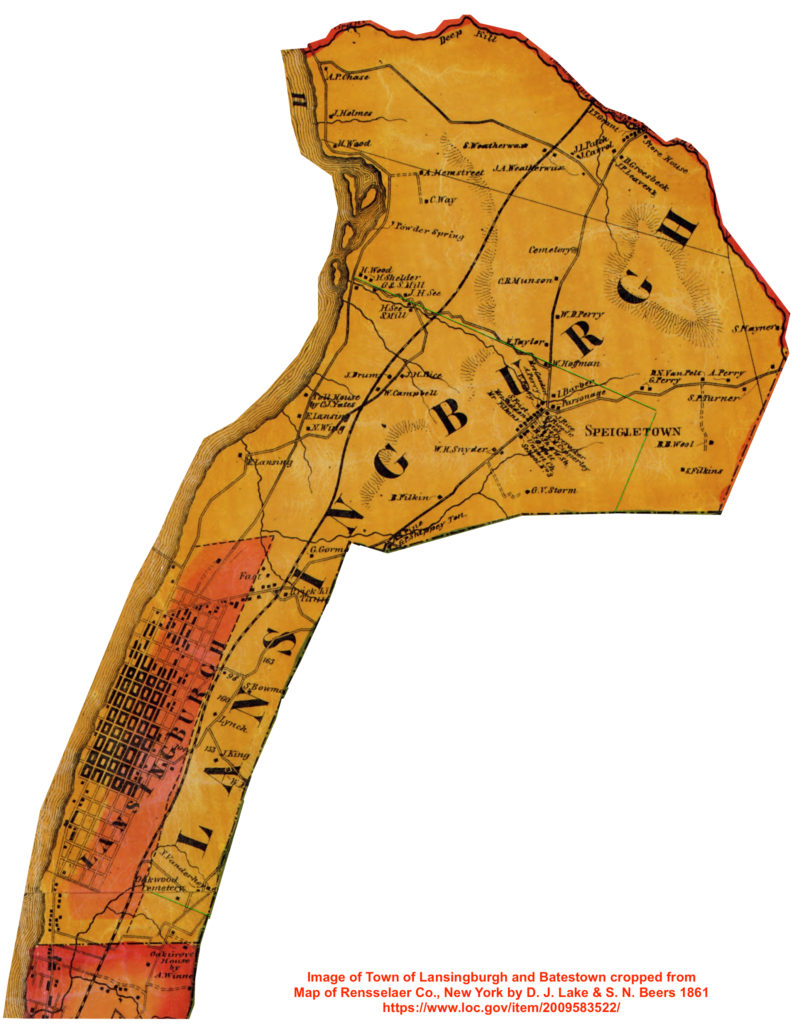 Oakgrove House by A. Winne in Batestown south of Oakwood Cemetery; Image of Town of Lansingburgh and Batestown cropped from 1861 Map of Rensselaer County

☞ PICNIC OF THE NORTH TROY M. E. SUNDAY SCHOOL.—While the members of the Mission School on Rensselaer street were enjoying themselves in the upper eastern portion of Winne’s Grove, yesterday, the children and friends of the North Troy M. E. Sunday School were having a good time in the western end of the same grove. The light hearts and cheerful voices of the little ones made the woods resound with their merry music, and Winne’s beautiful grove has seldom presented such a pleasant sight.
Troy Daily Whig. August 20, 1864: 3 col 5.

PIC NIC-IANA.
—
The Fashionable Summer Amusement—Pic Nics Considered Socially, Topographically, Gaily and Festively—A Glance at the Greensward—An Afternoon out of doors among the Dancers and Danceresses.
Reader, dost thou pic nic it?
Not such pics nor such nics as we had, when children, on the greensward.
Not the cheerful procession of little folks, exchanging the decorum of the Sabbath School for a day in the woods.
We refer to those places where “children of larger growth” do congregate—pic nics that are honored by advertisements in the newspapers, with “tickets for sale here” in shop windows—pic nics that are “as gay as they make ’em” and twice as festive—pic nics where the beauty and fashion of our Ilionic metropolis, from Batestown to the Poestenwynantskill, can be seen in all their waterfalled radiance.
Such are our modern pic nics. […]
Winnie’s Grove is on Oakwood Avenue, but not so near the silent city as to disturb those who sleep their last sleep. it is reached by ‘busses, wagons and other nuisances on the avenue (front way)—also by leaving the horse cars at the Bull’s Head, and clambering a hill till a policeman wants to see your ticket or else threatens to make a “dead head” of you with his club. This is the back door. […]
Troy Daily Times. July 29, 1865: cols 3-4. For the whole article see “Pic Nic-iana: The Fashionable Summer Amusement” (1865). 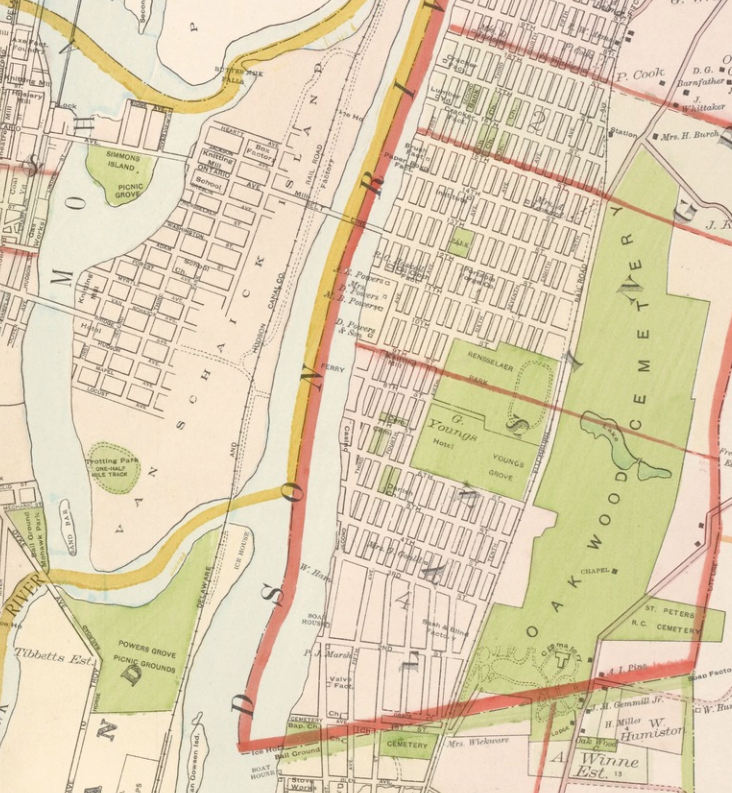 The quarterly business meeting of the Christian Endeavor Society will be held Tuesday night in Winne’s Woods on Oakwood Avenue, where supper will be served at 6:30 o’clock.
Troy Times. November 22, 1923: 16 col 2.