Batestown was the name for the area roughly from what’s now named Ingalls Avenue (formerly Canal Avenue) north to 101st Street. It had been part of the Town of Lansingburgh from 1807 to 1836. Some descriptions identify Batestown as the northern half of Middleburgh. It was for a long time home to the Rensselaer County Agricultural Society Fairgrounds (forerunner of the Schaghticoke Fair).

I suppose I must also mention Batestown, for it has a tavern, and if I mistake not, a few shops, quite as near half way between Troy and Lansingburgh, as is the ‘Half-way-House,’ between Troy and Albany.”
Spafford, Horatio Gates. A Gazetteer of the State of New-York. Albany, NY: B. D. Packard, 1824. 275. https://books.google.com/books?id=tw9IAQAAMAAJ&pg=PA275

IN ASSEMBLY.
[…]
Friday, June 22. […]
A conversation took place on a difficulty suggested by Mr. Kemble, and brought before the committee by a memorial from the village of Lansingburgh, arising from conflicting jurisdictions of that village and the city of Troy; the authorities of Troy having established a quarantine ground within the limits of that village. Mr. K stated that the city of Troy, being thickly settled as far as the northern boundary, and owing to the peculiar location of the two places, it was impossible to establish a quarantine without encroaching on the limits of the neighboring village. He was unable, however, to suggest a remedy; he had brought up the subject for the consideration of the house.
No motion having been made by way of amendment or otherwise, to suit the case, the committee proceeded with the bill.
Mr. Palmer moved an amendment, giving to the several boards of health, the specific power to remove residents of such places as were deemed unsafe, from their location or otherwise, both to said residents and the public, but withdrew it on a suggestion, that the cases were provided for by the general provisions of the bill.
The bill then passed without amendment, and the committee rose and reported; when it received its third reading and passed.
“New-York Legislature.” Geneva Courier. June 27, 1832: 2 col 2.

NOTICE is hereby given, that application will be made to the Legislature of this state at its present session, to change the south boundary line of the village of Lansingburgh Dated Lansingburgh, Feb. 3, 1834 6w
Troy Budget. February 11, 1834: 3 col 2.

AN ACT to set off a portion of the town of Lansingburgh to the city of Troy.
Passed May 24, 1836.
The People of the State of New-York, represented in Senate and Assembly, do enact as follows:
§ 1. All that part of the south portion of the town of Lansingburgh, lying and being south of a line commencing at the northwest corner of the twenty acre lot of land formerly owned by Aaron B. Hinman, and now occupied by Horace Turner, and running thence due east to the east boundary of the town of Lansingburgh, is hereby set off and annexed to the city of Troy, and shall become a part of the fourth ward of said city of Troy.
§ 2. The district of country mentioned in the preceding section, and the inhabitants residing therein, shall not be liable for any taxes, assessments and charges heretofore assessed upon the city of Troy; nor shall such district or its inhabitants, be liable to assessment or taxation for the reimbursement of any debt heretofore contracted by the city of Troy.
§ 3. This act shall take effect from the first day of July next. 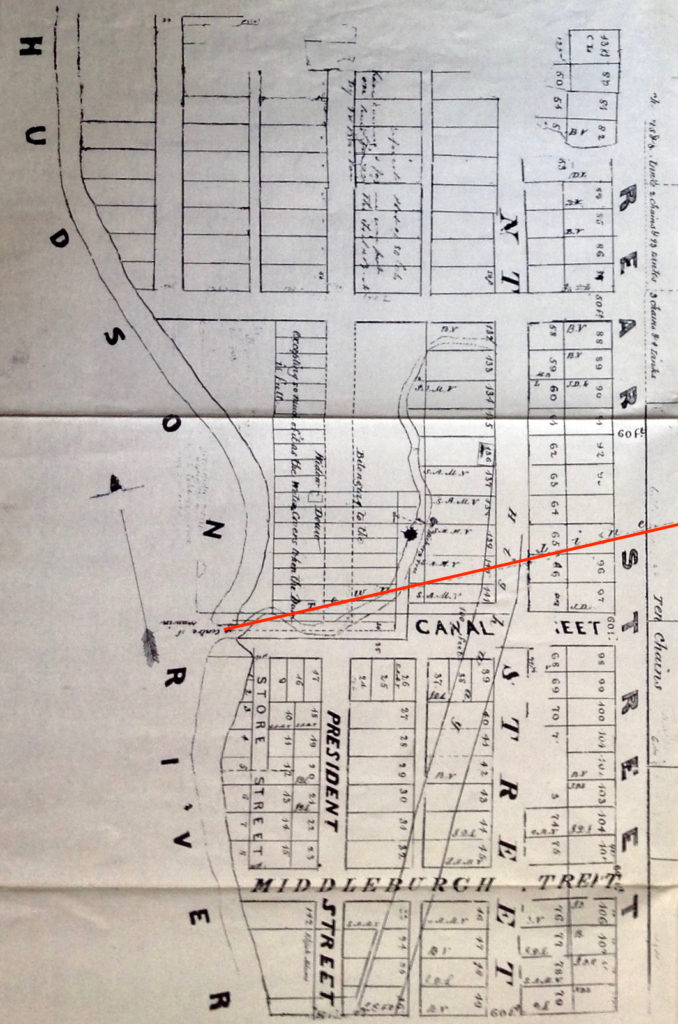 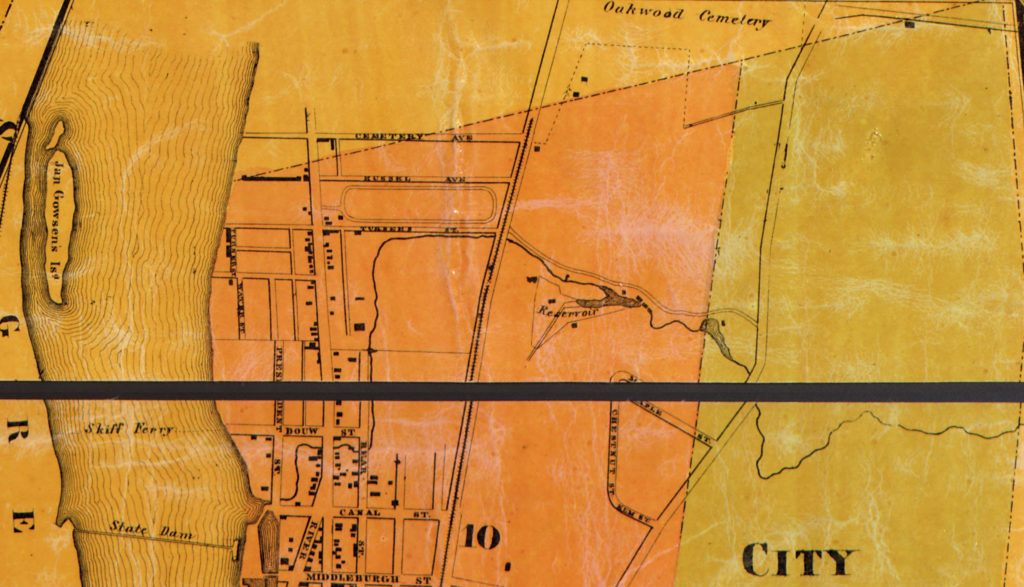 Detail of Batestown area from 1834 inset map of City of Troy from “Map of the state of New York : with parts of the adjacent country, embracing plans of the cities, and some of the larger villages” from the New York Public Library. 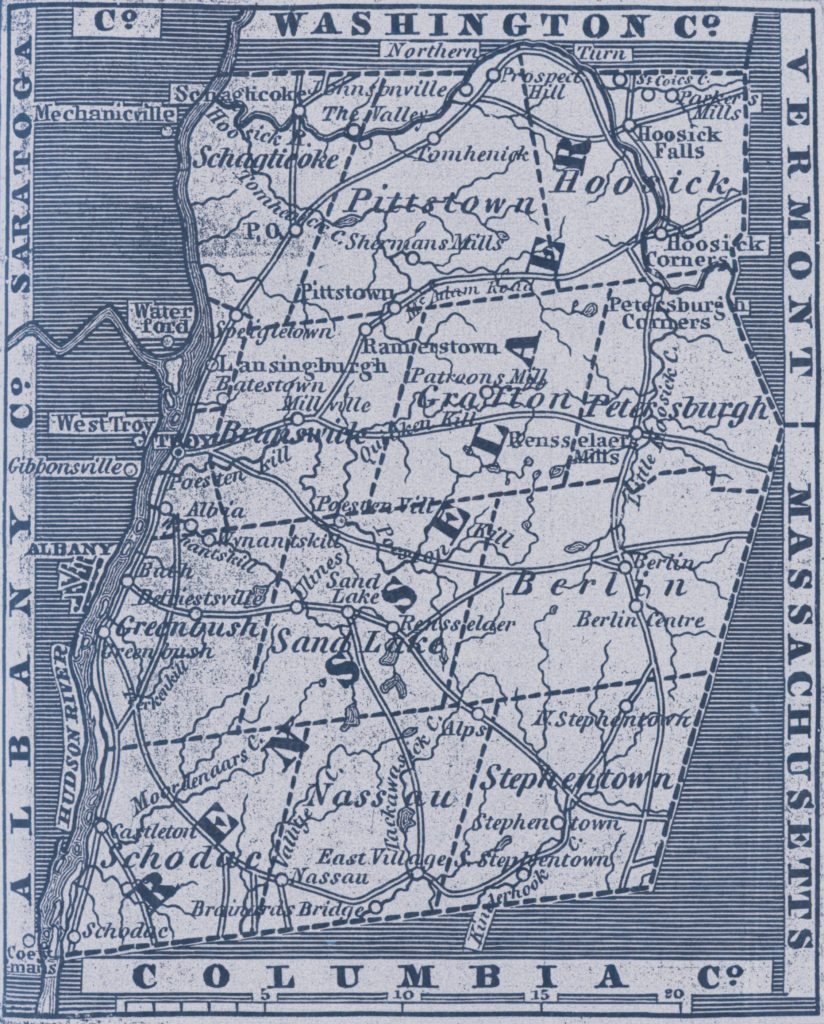 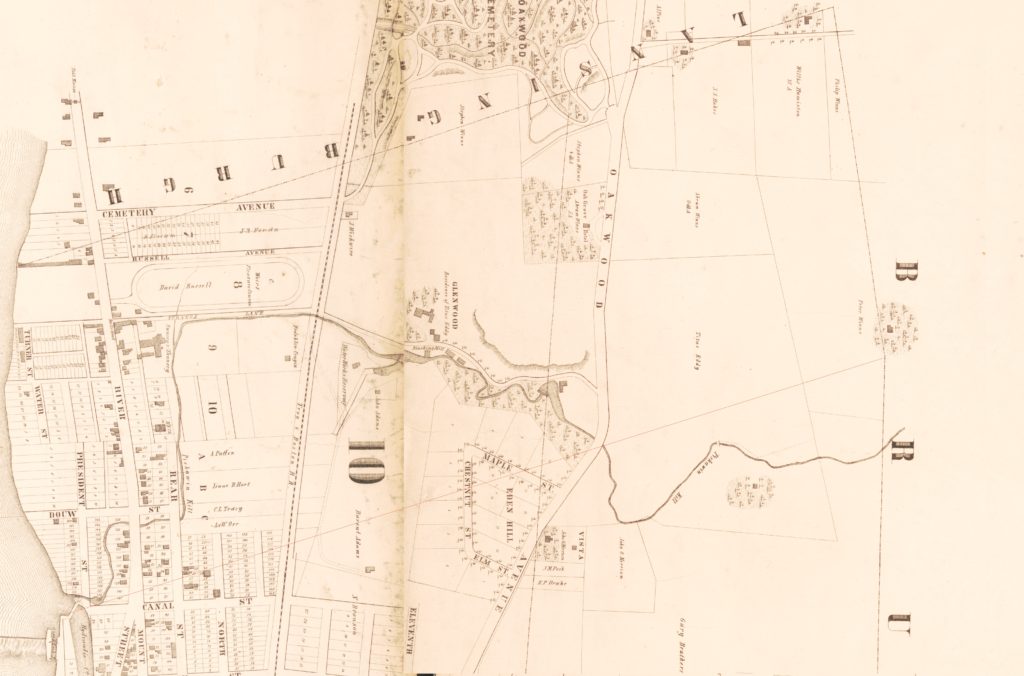 Some of your readers would be astonished if I were to tell them that up at Lansing’s grove, where the Lansing family now live, there was once a large nail-factory; and that the brook that comes down through there, and across the road, furnished the power; and yet such is the truth. Otis Bates owned the factory and, in truth, the whole property. He had near one handred men at work there. William Lansing, father of John and Jacob, the owners of the lumber-yard, bought the property of Bates.
The tavern, in Batestown, known as Barney Adams’s place, was built by Bates; and, just below it, on the same side, he had a large nail-factory. The brook furnished the power.
“Old Man.” “Lansingburgh, N.Y.” Historical Magazine 10(1). July 1871. 35
https://books.google.com/books?id=U1U4AQAAMAAJ&pg=PA35 [It’s possible that the recollections of the “Old Man” confuse Batestown with what was known both as Adamsville and Baxterville in the northern part of the Village of Lansingburgh. What would become the better-known Lansing’s Grove was in the northern part of the Village, but it’s clear there had been an older Lansing’s Grove in the southern part of Lansingburgh.]

Batestown was an early settlement south of Lansingburgh and took its name from Otis Bates, who owned Bull’s Head Tavern at Turner’s Lane (now Glen Avenue) and an iron works on the river bank at what is now Laureate Club grounds. The old tavern is still standing at the southeast corner of River Street and Glen Avenue, and including the three brick houses and lots to the south with horsesheds in the rear.
“Here Are the Answers.” Troy Times. January 28, 1928: 6 cols 5-6.