Nestledown was the home of the William Gordon Patrick Campbell (1825-1901) family in the Campbell’s Crossing area (also called Campbell Hill) of northern Lansingburgh north of Pleasantdale, on Haughney Road north of the intersection with the River Road and north of the railroad crossing itself. More specifically, somewhere in that stretch of homes starting at 83 Haughney Road on the west side.

—W. G. P. Campbell, at his Nestledown gardens, is daily harvesting from $75 to $100 worth of Dutch onions, and lettuce, radishes, spinach, asparagus, etc. in proportion. Mr. C. has a perfect gold mine, in value, in Nestledown.
“Agricultural Notes.” Lansingburgh Courier. May 6, 1882: 2 col 1.

The June Weddings.
—Last evening at Nestledown, the residence of Mr. and Mrs. W. G. P. Campbell, above Lansingburgh, the wedding of Miss Lottie Campbell to Arthur Keefe was solemnized. A band was in attendance, and the spacious lawn surrounding the residence was beautified by elaborate decorations. The ceremony was performed by Rev. Ebenezer Comstock. Frank Hunter and Stephen I. Comeskey were the ushers.
Troy Daily Times. June 22, 1893: 3 col 5.

—A disastrous conflagration occurred near Lansingburgh, early Monday morning, resulting in the destruction of a dwelling house, a tool house, a carpenter shop, a carriage house, two stables and two large green houses, together with the greater portion of the contents of the buildings. The scene of the fire was at Nestledown, the farm of W. G. P. Campbell, situated about two miles north of [the Village of] Lansingburgh, and little could be done to save the structures.
“Vicinity Happenings Gathered from Many Sources.” Schuylerville Standard. October 27, 1897: 5 col 3.

FIRE’S SECOND VISITATION.
Nestledown, the farm of Highway Commissioner W. G. P. Campbell, about two miles above Lansingburg, was visited by fire Tuesday night, and a loss of about $5,000 was entailed. About a year ago this place was destroyed, and the buildings ruined. Tuesday night were new ones just completed. The original loss was $16,000. The origin of the fire is not known, but it is supposed to have been caused by incendiaries. A year ago when the destruction of the buildings occurred there was a presumption that the place was set on fire, and the owner is now convinced. The barn buildings consisted of a large double barn, sixty-six feet long and forty wide, and a new shed ninety feet long and forty feet wide, two stories, and of wood. The fire was first seen at the eastern end of the shed, and while the alarm was sounded there was no possibility of saving the contents of either the shed or barn. The latter place contained six wagons, nine horse and forty tons of hay. The shed was used as a tool house and recently purchased farming implements were totally destroyed. An attempt was made to rescue the horses, but it was impossible. There was also an immense quantity of farm produce in the barn ruined. The new residence fortunately was not damaged.
“Found in Our Exchanges.” Glens Falls Daily Times. September 23, 1898: 6 col 1.

—The funeral services of Mrs. W. G. P. Campbell were read this morning by Rev. Dr. Nickerson of Trinity Church at the home, “Nestledown,” and the interment was in Oakwood cemetery.
“Lansingburgh.” Troy Daily Times. May 3, 1899: 4 col 2. 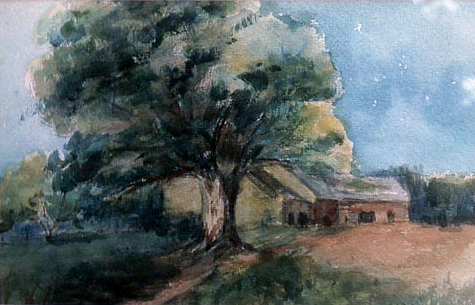 A $10,000 FIRE.
—
The Well Known Campbell Property Destroyed—Nestledown It Was Called—Loss $10,000.
“Nestledown,” the beautiful home of John Kipp on the River Road, about a mile north of the Troy line, was totally destroyed by fire this morning about 7 o’clock, involving a loss of about $10,000. “Nestledown” was for many years the home of the late W. G. P. Campbell of Lansingburgh, and later it was occupied by his son, C. Wallace Campbell. It was sold to Mr. Kipp, who formerly lived in Mechanicville, several years ago. It is thought that the fire started from a kitchen stove.
Troy Times. July 7, 1913: 5 col 5.

—Enoch Hunt has purchased Nestledown, formerly owned by W. G. P. Campbell, and has started the erection of a modern two-story dwelling on the site of the former Campbell homestead, which was destroyed by fire during the summer.
“Personal.” Troy Times. September 16, 1913: 6 col 4.