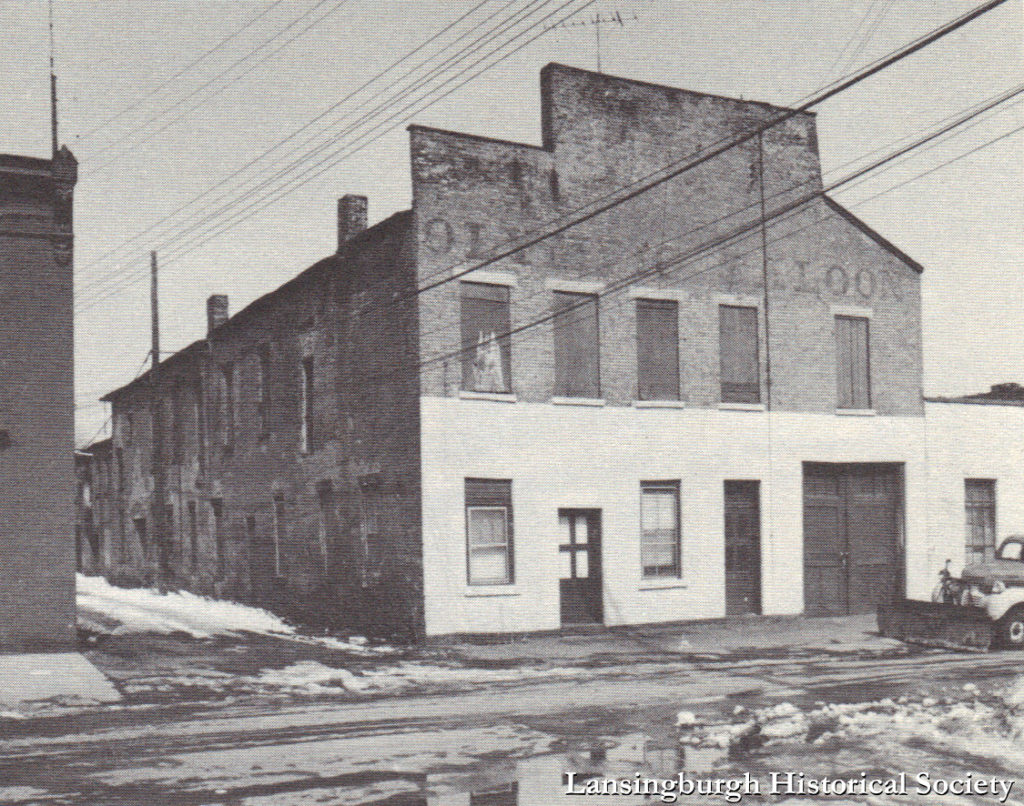 OLYMPIC SALOON
13 117th Street
One of the oldest remaining commercial buildings in Lansingburgh, the Olympic Saloon appears to date from before the fire of 1843. Although it may have been rebuilt because of damage from the fire, an 1848 newspaper referred to it as the “Old Saloon and Bowling Hall.” For many years the Olympic was a commercial and social center of the village and housed a saloon, assembly hall, theater and offices, including law offices. Over the years many theatrical productions have been held in the building, which is a rare surviving example of a once significant building type.
Waite, John G. The Architecture of Lansingburgh, New York. Lansingburgh, NY: Lansingburgh Historical Society, 1976.

The former Olympic Saloon was demolished between 2001 and 2004 for parking.

SET ‘EM UP.—BOWLING SALOON.—The Bowling Alley on Richard street [117th St], in Lansingburgh, has just been refitted up in a splendid style and is now open with two of the best alleys that can be found in the county. The proprietors promise that the public will find every comfort and convenience at this place. Charges reasonable. Please call.
KINSLEY & KING.
Lansingburgh, February 3, 1848.
Lansingburgh Democrat. February 3, 1848: 3 col 1. [May or may not have been the Olympic Saloon.]

CONCERT!
—
Great Western—(Yankee Comedian,)
Will give an Entertainment this (Saturday) evening at the Olympic Saloon, Lansingburgh, assisted by

GREAT WESTERN.—This real comic genius has been paying our village a visit the past week. We are well pleased that it is in our power to add our testimony to the justice of his widely-spread fame. He performed at the Olympic Saloon on Saturday and Monday Evenings. We have had the pleasure of witnessing his mirth-provoking peculiarities and Yankee eccentricities, and listening to his side-splitting stories. If his exhibitions are not worth the money paid for admission, then we’ll forfeit our hat, which is a shocking bad one. His perfect delineation of Yankee character is remarkable, and while listening to his anecdotes, one cannot help concluding with the Irishman that “he’s more like life than the original.” His entertainments possess a magical power for dispelling the blues.
Lansingburgh Democrat. August 24, 1848: 2 col 3.

Liberality of our Trustees.
The members of our military company have lately made application to our Trustees for a room sufficiently commodious for their drilling purposes, and to be used as their armory. We are glad to hear that the Trustees have appropriated the spacious room underneath the Olympic Saloon to their service for that purpose.
Lansingburgh Democrat. September 13, 1848: 2 col 3.

A meeting of our “Rough and Ready” citizens will be held at the Olympic Saloon this evening. We see by the notices posted in our streets that a new speaker has made his appearance on the political rostrum; his name is Christopher Morganand he will address the meeting this evening; he is possessed of a jaw breaking name, and if he does not astonish the natives we shall miss our guess.


—
FreeSoil Meeting.
A Free Soil Meeting was held at the Olympic Saloon last evening. D. Washburn addressed the meeting. There was a pretty fair attendance notwithstanding the bad weather. Our Brass Band and the Waterford Glee Club were there.
Lansingburgh Democrat. October 19, 1848: 2 col 3.

The “Lansingburgh Artillery” Company, under command of Capt. Seaman, passed the Democrat office on Saturday last. They were out for drill, and made a splendid appearance. Their new uniform attracted universal attention, and reflected great credit upon the gentlemen who got them up. They have decidedly the prettiest uniform in the county, and with the prospect of receiving pay for the time devoted to their parades, we see no reason why we may not consider this a permanently established company. Their armory is under the Olympic Saloon, and is splendidly fitted up as a Drill room, with racks, cases &c., for all their accoutrements. This company certainly is an honor to the village, and our citizens cannot do less than to encourage them in every possible manner.
Lansingburgh Democrat. November 9, 1848: 2 col 4.

Anatomical Lecture.
Dr. WOMERSLY, who has been lecturing on Anatomy throughout the country, has for the past three evenings been giving the citizens of this place a treat of useful information on the above subject at the Olympic Saloon. He has been very respectably attended by both sexes, during each Lecture. He lectures again to-night at the Olympic Saloon.
Lansingburgh Democrat. January 18, 1849: 2 col 4.

The Swiss Giant will exhibit himself at the Olympic Saloon this evening. He is nearly 8 feet high.
Lansingburgh Democrat. April 12, 1849: 2 col 2.

An exhibition will be given by Rykert & Belker, at the Olympic Saloon this evening. Go early and secure a good seat.
Lansingburgh Democrat. November 1, 1849: 2 col 4.

A GOOD MOVE.—We notice that our Justices have commenced the practice of holding their criminal examinations, where they excite any unusual interest, at the Olympic Saloon. This is a good movement. We would suggest to our citizens the idea of purchasing said building and converting it into a Town Hall.
Lansingburgh Democrat. June 26, 1851: 1 col 1.

YANKEE LOCKE.—This quintessence of fun, cut up, boiled down, and strained off, gave an entertainment at the Apollo Hall last evening. He had a fine house, and one which was in a continual roar of laughter throughout the performance. He announces to show again this evening. He will also give an entertainment at the Olympic Saloon Lansingburgh, to-morrow evening. Our Lansingburgh friends should see him. He is capital.
Troy Daily Times. August 10, 1851: 2 col 3. [George Evans Locke (1817-1880)]

Redden’s Theatrical Company, recently performing in the Olympic Saloon, in this village, have gone to Saratoga Springs, have have re-opened the Pavilion Theatre of that place. While here they met with the most unbounded success, the saloon being crowded to its utmost capacity on the last night of their performance, on which occasion a beautiful fireman’s trumpet was awarded as a premium to one of our fire companies.
Lansingburgh Democrat. November 11, 1852: 2 col 5.

The Stage, seats, &c., have been removed from the Olympic Saloon, preparatory to turning the same into a manufacturing establishment.
Lansingburgh Democrat. April 10, 1856: 2 col 2.

WHAT NEXT.—During the past week a man has been giving exhibitions of dog and bear fighting at the old Olympic Saloon in this place. Is there not a law against such performances? Where is the worthy President of the village about these days?—here is a fine opportunity for enforcing one of the most useful of our village ordinances. The exhibitor is clearly liable to a fine of $25.—The proper authorities should give this subject their attention.
Lansingburgh Democrat. March 26, 1857: 2 col 5.

An old resident relates a story of the early ays of the Lansingburgh fire department dating back more than fifty-five years that is decidedly interesting. In 1859, he says, Lansingburgh Fire Engine Company No. 4 occupied the house still standing at the foot of [One Hundred] Eighteenth Street, then Grove Street. […]
the firemen arranged for a celebration in the village with a big parade of visiting firemen, the presentation of a banner, speechmaking and other events. The banquet was held in the brick building on [One Hundred] Seventeenth Street just west of Powers’ Opera House, now occupied as a grain warehouse and which in previous years had been an armory.
“Lansingburgh.” Troy Times. June 14, 1915: col 4.