In 1847 New York State passed a law concerning birth, marriage, and death registration. Compliance with the law was not especially good and doesn’t seem to have improved (outside of New York City) until a new law was passed in 1880. The legislative intent of the 1847 law is reasonably well documented in old newspaper items, examples of which follow below.

Some of the birth, marriage, and death records for Lansingburgh created under the 1847 law do survive, to varying degrees. Some marriage records are in the Lansingburgh Historical Society’s collection at the Rensselaer County Historical Society. Otherwise, there are some old transcriptions taken from originals that seem to have been lost or destroyed. 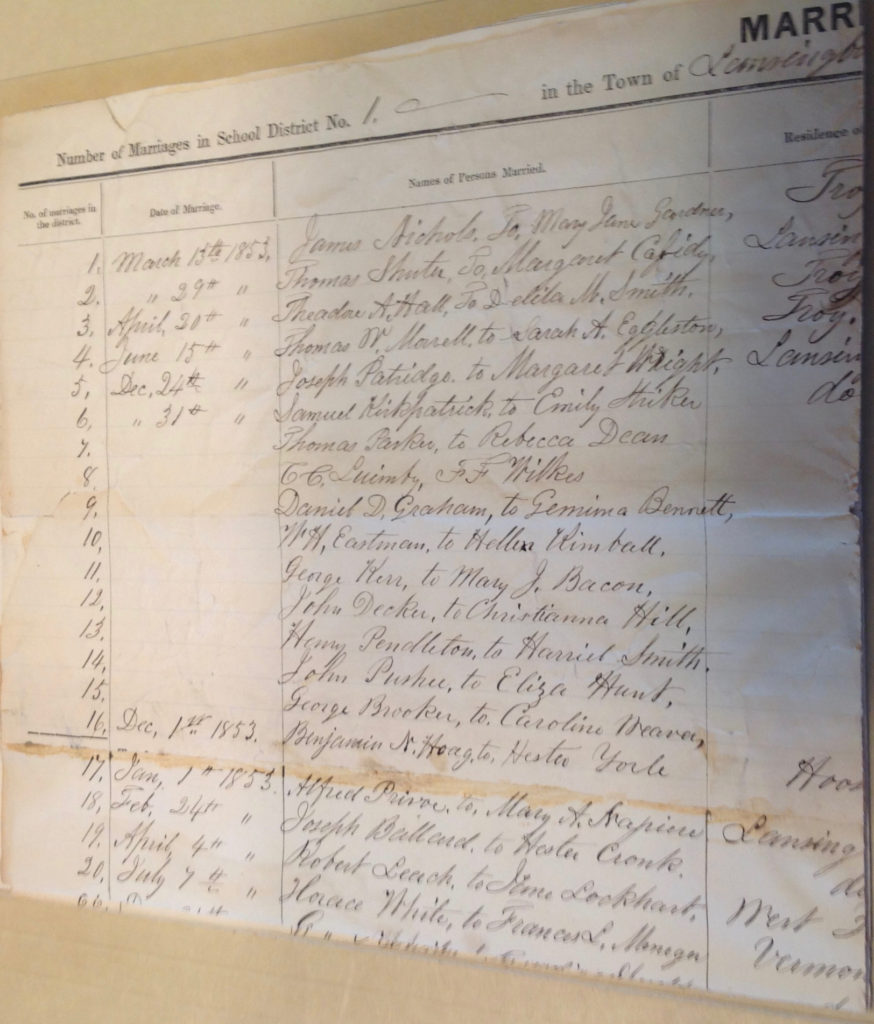 Partial photograph of “Number of Marriages in School District No. 1 in the Town of Lansingburgh” (a proper photo or scan of this will be added later) 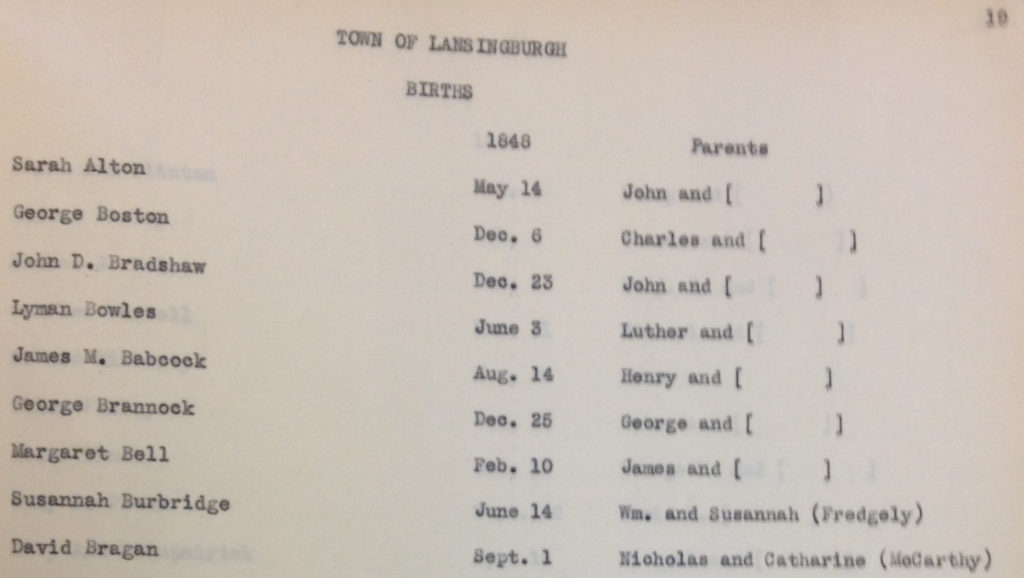 Partial photo of transcription of “Town of Lansingburgh births” as published by Milton Thomas.

NEW YORK ACADEMY OF MEDICINE.—The first regular meeting of this academy was held on Wednesday afternoon, at the Lyceum in Broadway. […]
Dr. Griscom presented a memorial on the subject of the registration of births, marriages and deaths, which was approved of by the academy, and was signed by the officers and fellows and ordered to be transmitted to the Legislature. The object of this memorial is to induce the legislature to enact the law which they are now considering.
New York Morning Express. February 5, 1847: 1 col 5.

Wednesday, May 6th, 1846. […]
Dr. GRISCOM moved that a Committee of Five be appointed to consider the expediency, and, if deemed expedient, the mode, of recommending, and urging upon the several State governments the adoption of measures for a registration of the Births, Marriages, and Deaths of their several populations. Carried nem. diss.
Proceedings of the National Medical Conventions, Held in New York, May, 1846, and in Philadelphia, May, 1847. Philadelphia, PA: T. K. & P. G. Collins, 1847. 20-21.

MINUTES OF THE PROCEEDINGS
OF THE
NATIONAL MEDICAL CONVENTION,
HELD IN THE CITY OF PHILADELPHIA, IN MAY, 1847.
—
PHILADELPHIA, May 5th, 1847. […]
Dr. GRISCOM, of N. Y., Chairman of the Committee appointed by the last National Convention to consider the expediency and mode of urging upon the State governments the adoption of measures for a registration of Births, Marriages, and Deaths, presented a Report, which was received, and laid upon the table in order to be printed. (See Document H.)
Proceedings of the National Medical Conventions, Held in New York, May, 1846, and in Philadelphia, May, 1847. Philadelphia, PA: T. K. & P. G. Collins, 1847. 34.

The Committee appointed by the National Medical Convention, held in May, 1846, to consider the expediency, and (if expedient) the mode of recommending and urging upon the several State governments the adoption of measures for a Registration of the Births, Marriages, and Deaths of their several populations, respectfully

CHAP. 152.
AN ACT providing for a registry of births, marriages and deaths. Passed April 28, 1847.
The People of the State of New York, represented in Senate and Assembly, do enact as follows:
Section 1. The clerks of the several school districts of this state, organized according to law, and where there shall be no clerk, or he shall be incapable of acting, the trustees or one of them of such district shall annually, on or before the fifteenth day of January in each year ascertain from the most accurate means of information in their power, and report in writing to the town clerk of the town, or one of the aldermen of the ward in which the school house of their district shall be situated, or in the city of New-York to the city inspector, under appropriate heads, and in such forms as shall be prescribed by the secretary of state, the number of births, marriages and deaths which have occurred in their districts respectively during each year preceding the first day of January, the month and day of their occurrence, the names and residences of the person so married or dying, and the names of the parents of such children born during the year, the sex, color and names of the children, name and residence of the officer or clergyman performing the marriage ceremony in cases of marriage, the age of the persons who shall have married or died during the year aforesaid, and the particular disease or cause of their death. The report of all marriages and births in the city of New-York shall be reported direct to the city inspector, and in case there is no physician or midwife in attendance at any birth, then the parents shall be required to report to the city inspector within one month, and all deaths in the city of New-York shall be reported to the city inspector as at present, every week.
§ 2. It shall be the duty of the town clerk of each of the towns in this state, or of any alderman receiving the report as above specified, within fifteen days after the receipt thereof to record the same in a book to be provided by him for that purpose, and to transmit a copy thereof, or of an abstract thereof in such form as shall be prescribed by the secretary of state, to the county clerk or city inspector, whose duty it shall be within fifteen days after the receipt thereof to forward an abstract duly certified by him, in such form as shall be prescribed as aforesaid, to the secretary of state, who shall file the same in his office, make a complete abstract thereof, and transmit the same to the legislature as soon as may be practicable thereafter.
§ 3. It shall be the duty of clergymen, magistrates and other persons who perform the marriage ceremony, to keep a registry of the marriage celebrated by them, and to ascertain as far as practicable and note the ages of the persons married and the time thereof, and their places of birth and their residences in such registry. It shall also be the duty of physicians and professional midwives to keep a registry of the several births in which they have assisted professionally, and the time of such birth, sex, color and the residence of the parents; and physicians who have attended deceased persons in their last sickness, clergymen who have officiated at the funeral, and sextons who have buried deceased persons, to keep a registry of the name, age and residence of such deceased persons and the times of their deaths. It shall be the duty of such physicians, magistrates, clergymen and sextons to allow the clerks of the school districts within which they respectively reside, to inspect such registries from time to time, and furnish them such other information in their power as may be necessary to enable such clerks to make the returns by this act.
§ 4. For the performance of the duties herein required, the officers of the several districts, towns and counties rendering the services herein specified, shall be entitled to such compensation for their services and expenses incurred by them, as may be audited and allowed by the boards of supervisors of such counties respectively.

NOTICE—To the Clerks of school districts in the town of Rhinebeck;—The instructions of the Secretary of State, to School District Clerks, under the “Act providing for the Registry of Births, Marriages and Deaths,” having been left with the Supervisor of the town; the Clerks of the several School Districts, will please call immediately for the same, at his office in the village of Rhinebeck.
TUNIS WORTMAN, Supervisor
Rhinebeck, August 23, 1847.
Rhinebeck Gazette. August 30, 1847: 2 col 5.

☞ The following letter has been received from the Secretary of State, in relation to the construction of the Act entitled, “An Act providing for the Registry of Births, Marriages, and Deaths,” passed April 29, 1847.
SECRETARY’S OFFICE,
ALBANY, January 7, 1848.
GEORGE VANDEVERG, Jr., Esq., Jamaica, L. I.
SIR: Yours of the 6th inst., was received here to-day. The law requiring the Registry of Births, &c., takes effect immediately, and the returns of the Clerks of the School Districts, are to include the year 1847, and up to December 31st. Marriages are to be registered where the ceremony is performed, and the Clerk of the District should enter the residence of both husband and wife—it may be in another District, Town or County. The entry respecting the residence, should give all the particulars relative thereto, as the Clerk can obtain. Deaths are to be registered in the District where the event takes place, and the “residence when living” given in the proper column. Respectfully Yours,
CHRISTOPHER MORGAN.
Secretary of State.
The Long-Island Farmer and Queens County Advertiser. January 11, 1848: 2 col 2.