[The Troy Deaf-Mute Literary Society] will hold our annual picnic at Lansing’s Grove, Lansingburgh […] The grove is a very nice place to indulge in games of various kinds. There is a shanty and a table, on which refreshments will be served in open air. The grounds is low and nearly level with the Hudson River. A hill on the east side forms a wall. A dense forest surrounds the grove. Beautiful views can be easier imagined than described.
Deaf-Mute’s Journal [NY]. July 18, 1889: 3 col 5. 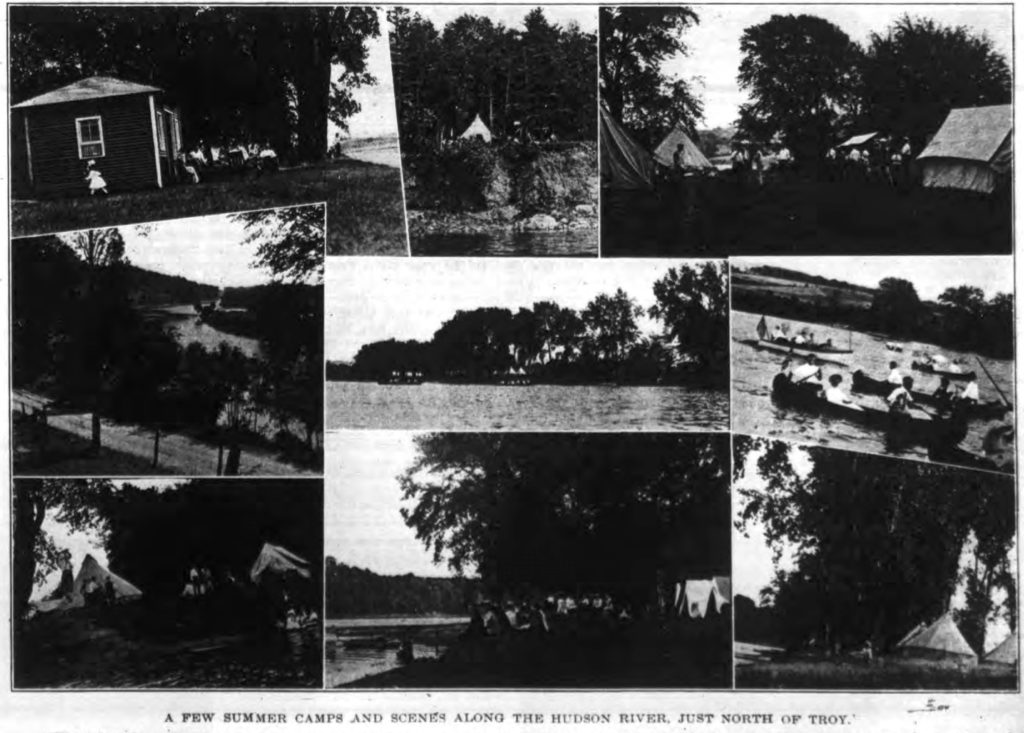 A FEW SUMMER CAMPS AND SCENES ALONG THE HUDSON RIVER, JUST NORTH OF TROY. Never before have there been so many summer camps, nor so many campers and pleasure-seekers, along the beautiful stretch of river between the Waterford bridge and the “Riffs” as during this season. From Lansing’s Grove north, both sides of the river are dotted with tents and tiny bungalows, in which 200 or more residents of Troy and vicinity have made their homes for at least a part of the summer season. Then, too, there has been a great increase in the number of power-boats, launches, rowboats and canoes, and on pleasant Sundays and holidays the pretty river is “alive” with hundreds of boating parties. The spots most favored by the campers are Weber’s farm, Converse’s Island, Lansing’s Grove and the cliff and point opposite the Country Club grounds above Waterford. Troy Times Art Section. August 26, 1910.

LANSING’S GROVE PROPERTY.
—
Sold in Partition at Public Auction to Boston Real Estate Speculator—Will Be Cut Into Bungalow Sites and Building Lots.
Lansing’s Grove and farm lands on the River Road, north of Lansingburgh, were sold for $7,000 at public auction in the Court House to-day to Samuel A. Moody of Boston, a real estate promotoer, who stated that he intended to divide the lands into building sites for bungalows and one-family residences.
A Partition Action.
The sale was had in the partition action of James A. Fuller and others against Alida Rochester and others, District Attorney Taylor acting as referee, and attorney John A. Cipperly appearing as plaintiff’s counsel. The property is divided into three parcels, one of which is the grove of twenty-seven acres, the other two parcels having approximately fifty-four and twenty-seven acres each.
Bought as One Parcel.
A large crowd of persons attended the sale and the bidding was spirited and occupied an hour. At first the whole tract was offered and Mr. Moody’s bid of $6,200 was high. Then the parcels were offered separately and Mr. Moody confined his bidding to the grove lot, running his bid up to $3,000. Messrs. J. K. P. Pine, William Rochester and F. H. Wager bid on the other two parcels until the aggregate bid on all totaled $6,750. Mr. Moody raised his bid on all to $6,900, and when the others began raising their separate bids he stopped all bidding by loudly calling $7,000, and the entire property was knocked down to him.
An Historical Site.
This land was identified with many incidents of the early history of the county, and was purchased from the Patroon Van Rensselaer by Abraham J. Lansing in 1769. The grove has one of the finest river locations in this section of the country and is a mecca for numerous picnic and camping parties in the summer months.
Troy Times. February 11, 1915: col 4.

Subsequent to development, the area became known as Pleasantdale-on-the-Hudson — Pleasantdale or just “the ‘Dale” for short.