123rd Street Boat Launch (formerly 23rd Street) and adjacent Park. Once a spot with multiple benches and a location favored by local churches for open air services, now it is not listed among the city’s parks though it is a designated part of the Hudson River Greenway Water Trail. The park, north of 123rd Street, extended from the river to 2nd Avenue, around the old Lansingburgh North End Public Bath House. 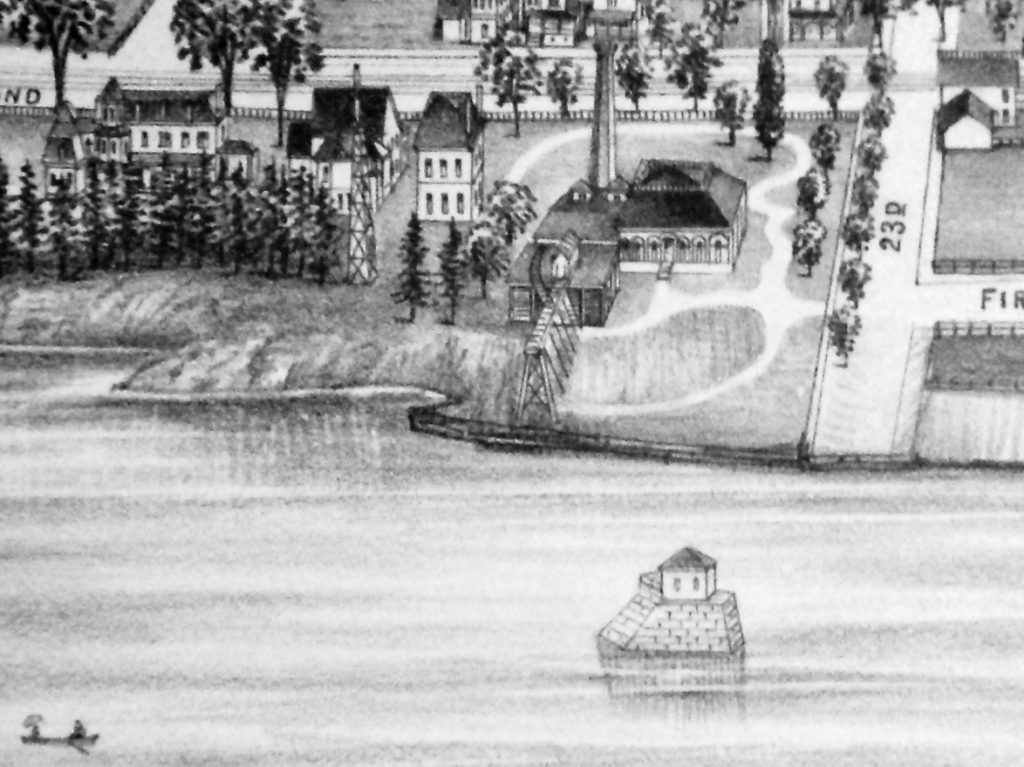 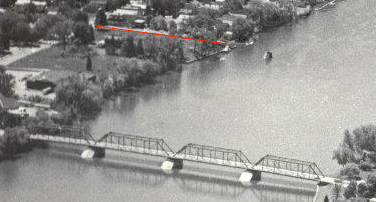 Improving Twenty-third Street Park […]
—The park on the river front at the foot of Twenty-third Street is more popular this summer than ever before. Under the contracts for the alterations of the Twenty-third Street pumping station and the installation of public baths there, the park will be materially improved by grading and terracing, and additional seats will be placed there. The work of grading the park has been commenced.
—
Big Fleet of River-Boats.
The fleet of motorboats owned by residents of Lansingburgh and plying on the Hudson River this summer has been increased since the season started by fifty, making altogether about 140 boats owned by Lansingburgh persons. The greater number of these have been placed in the river in the last three years. In addition to these, there are more than 400 canoes and rowboats in use on the river by residents of Lansingburgh, one-fourth of which have been placed in the water this summer. Frank Icke at the foot of Twenty-third Street alone has a fleet of seventy-six boats.
“Lansingburgh.” Troy Times. July 16, 1910: 6 cols 2-3.

—There will be two open-air services in the Lansingburgh parks next Sunday. One will be in the Twelfth Street Park [Village Green], under the charge of Rev. Andrew S. Hain of the English Lutheran Church of the Redeemer and Rev. Charles H. Walker of the First Presbyterian Church and the other at the Twenty-third Street Park under Rev. Daniel M. Countermine of Olivet Presbyterian and Rev. F. J. M. Appleman of the Third Avenue Church of Christ.
Troy Times. July 5, 1912: 6 col 2.

Playground Matters […]
Mrs. Joseph Delakoff will meet with the embroidery class at the Twelfth Street playground this afternoon. The playground’s highly successful season is now drawing to a close, and all the work of the various classes is now being done with the final exhibition in view. The closing exercises and exhibition will be held according to present indications on the 7th of September, and all the youngsters are hustling now to get all their work completed before this important event arrives. It is thought by all those who have followed closely the effect of the new playground on the children of the section that the closing exhibition will prove beyond a doubt the utility of the venture. Mrs. William Davey, the teacher of the beginners’ class in sewing, has already collected an interesting exhibit of needle work done by the little tots, some of them under five years of age. Mrs. Davey is enthusiastic about the work and is certain that the sewing classes will be able to give a creditable demonstration of their skill. A food sale will probably be held in connection with the closing exercises. […]
Personal. […]
—Rev. Daniel M. Countermine has returned from his vacation and will preach Sunday at Olivet Presbyterian Church. In the evening at 8 o’clock he will address an open-air meeting at the Twenty-third Street Park.
“Lansingburgh.” Troy Times. August 23, 1912: 6 col 2.

Residents’ Complaint.
Residents of upper Lansingburgh who have been in the habit of frequenting the river-front park at the foot of Twenty-third Street, are raising protest at the recent action of the city in placing ashes in the park. An iron fence was recently placed along the dock wall, which was an improvement, but recently the city started dumping ashes over the lawn to level it. Residents claim that this action was unwarranted. The park, which is situated back of the old pumping station, has long been a popular recreation spot for the people of upper Lansingburgh, and ashes render it unfit for use.
Troy Times. July 22, 1913: 6 col 2.

A Place of Repose.
Now that the warm weather has come to stay those in search of relief from the oppressive heat find comfort strolling throught he parks and resting on the benches. The Twenty-third Street park is the mecca of all within access from its position on the river bank and it is here that the lack of seats is most apparent. No more delightful place for the stay-at-home can be found than along the river at this point. Invariably a breeze is stirring and the more proximity to the water is cooling. Motorboats are constantly chugging back and forth and the more restful motion of canoes as they glide over the smooth surface of the river completes the sense of repose which the watcher is seeking.
“Lansingburgh.” Troy Times. July 11, 1914: 2 col 3.

Removing Benches From Park.
Employees of the Department of Public Works to-day started removing benches from the Lansingburgh parks for the winter. The Twenty-third Street Park was cleaned up this morning and to-morrow the benches in the Powers Park on Second Avenue will be taken away.
“Lansingburgh.” Troy Times. November 8, 1915: 2 col 3.

Controversy Over Seventeenth Ward Service Board Location […]
The best location for the erection of the service board for the sons of the Seventeenth Ward in service is causing much dissension among the persons interested and has delayed the members of the committee in completing their plans. The following locations have been suggested as suitable ones: The City Park grounds around the public bathhouse, the lawn of the Twining Steamer Company, the corner at Spall’s grocery store, a point near George Vandercook’s meat market, the corner at Orville E. Bosca’s grocery store, the corner at Jacob Teitsch’s bakery, Hannah Brothers’ grocery store, the corner of Twenty-second Street [122nd St.] and Fifth Avenue, the corner at the Powers Old Ladies’ Home, and Twenty-fourth Street [124th St.] and Second Avenue. Alderman John C. Warden Saturday evening stated: “I wish all the mothers, wives, fathers, sisters and brothers of soldiers and any other interested persons would cast a vote by leaving at any of the places named a sealed letter with an expression of the location desired by them and why, so that the members of the committee could reach an agreement. The service board will be ready for erection in about two weeks, and I wish to state also that several names have been delayed in reaching the committee.” Many contend that the City Park grounds on Second Avenue and Twenty-third Street and the lawn of the Twining Steamer Company house would offer the most favorable sites because either of these places would be under city protection and miscreants would find little chance for the destruction of the board when in place. It is generally conceded by the residents of this section that the majority of persons interested will in the next few days develop a spirit of cooperation and settle the controversy.
“Lansingburgh.” Troy Times October 14, 1918: 3 col 3.

Religious Pageant on River Front Witnessed by Nearly 1,500 Persons […]
The clear weather of yesterday aided in making the pageant presented on the river front at One Hundred and Twenty-third Street last evening a success. The pageant, depicting “The Life of Christ in the Light of America,” was presented under the ausprices of the Community Council of Religious Education. The committee, which directed the pageant, consisted of Miss Louisa Flagler of the First Presbyterian Church and the Misses Helena Comstock and Vera Newman, of the First Methodist Church. Eleven of the Protestant churches of Lansingburgh participated and were assisted by Troop 8, Boy Scouts of America, Teleloka-Lewa Group, Campfire Girls, and the school children of Lansingburgh. The pageant showed the arrival of aliens to this country, and their appeal to Columbia, through the medium of Religion and Education, assists them in becoming citizens. Music was furnished by the junior choirs of the English Lutheran Church and of Millis Memorial Baptist Church. An offering was taken for the benefit of the Community Council of Religious Education.
“Lansingburgh.” Troy Times. June 13, 1921: 3 col 3.

Plan Lawn Party As Boys Club Benefit.
Final arrangements have been made for the lawn card party of the Women’s Auxiliary of the Lansingburgh Boys Club which will be held Wednesday at 1:30 p.m. at the Lansingburgh Bath House Lawn, 123rd St. and 2nd Ave.
Mrs. Harold G. Kelly and Mrs. Raymond L. Law, general cochairmen, stated that in the event of rain the event would be held at the Boys Club.
Times Record. June 10, 1967: 13 col 3.

The City Council voted unanimously at its November general meeting to allow the city to bond up to $7.7 million, with $2.2 million dedicated to the reconstruction of the city’s docks at the marina, as well as the 123rd Street boat launch.
Beam, Andrew. “City to assume operation of Downtown Troy Marina for 2014 summer season.” Troy Record. June 14, 2014. http://www.troyrecord.com/government-and-politics/20140614/city-to-assume-operation-of-downtown-troy-marina-for-2014-summer-season