The Casino Opera House seems to have had a short existence. First opened as the Casino Roller Skating Rink in 1885, it was reinvented for at most a few months in 1886 as a theatre. In 1895 it would be purchased by Samuel Bolton and thereafter known as Bolton Hall. 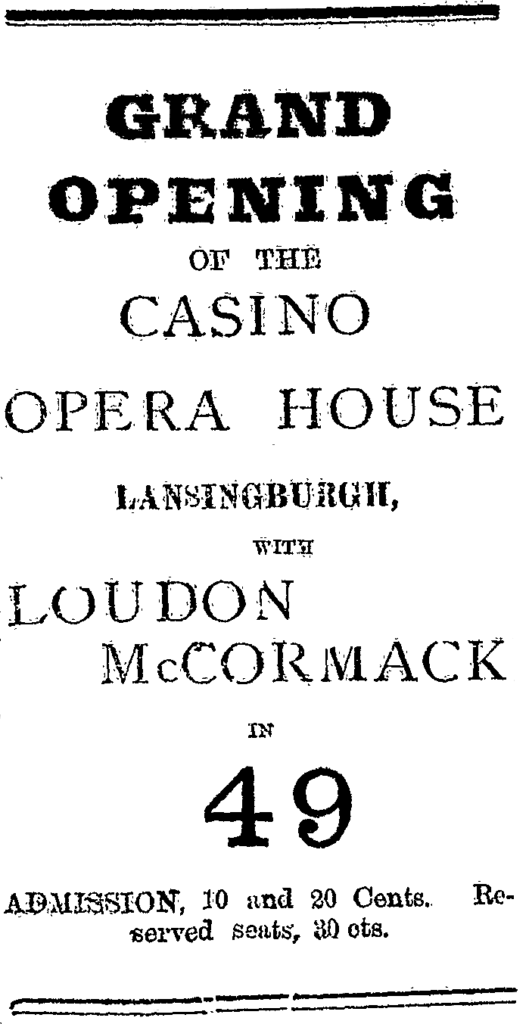 —To-night will occur the opening of the new Casino opera house, at Sixth street and Second avenue, Lansingburgh. The place has been transformed into an attractive theatre, with a stage 36×54 feet and new scenery. The seats are conveniently arranged. The initial performance will be “The Danites,” in which Loudon McCormack and company will appear.
“In Pleasant Places.” Troy Daily Times. September 20, 1886: 3 col 5.

In Pleasant Array.
—The initial performance at Oliver’s Casino opera house, Lansingburgh, last night was attended by an audience of 1,200 persons. The comedy drama of “’49” was well presented by the Loudon McCormack company. The play will be repeated this and to-morrow evenings. Thursday and Friday nights “The Danites” will be presented.
Troy Daily Times. September 21, 1886: col 2.
The New Casino Opera House.
Several weeks ago it was announced that the Casino rink at Lansingburgh would be closed and would open in September as an Opera House. Almost as soon as the doors of spaciones [spacious?] edifice was closed it was taken possession of by a large number of artisans and Mechanics who now show as the result of their labor one the most elegant as well as spacious opera houses outside the city of New York. The stage is 59×60 feet and proscenium and ceiling are beautifully decorated. The dressing and preparing rooms are commodious, and the seats already provided are sufficient to accommodate 2,000 and there will, it is believed, be room enough to seat almost another thousand. The scenery that has already been painted is most beautiful, and a corps of scenic artists are yet at work turning out exquisite scenery. The house will be managed by George H. Blair, for three years manager for Jacobs are Proctor at Albany. The initiatory performance took place Monday evening when the famous actor Louden McCormack supported by an excellent company appeared in the great American drama “’49.” The price of admission is but ten cents with ten cents extra for reserved seats and twenty cents extra for chairs. A number of first class attractions are already booked, and the manager states that he shall book only such attractions.
Lansingburgh Courier. September 25, 1886: 3 col 2.
For Pleasure’s Sake.
—Loudon McCormack’s excellent company in “’49” at the Casino opera house last night delighted a large audience. The play will be presented again this evening, and “The Danites” to-morrow and Friday nights.
Troy Daily Times. September 29, 1886: col 2.

By Trustee Demers—
Resolved, That the President be authorized to license the Casino Opera House for one year for the sum twenty-five dollars. Carried, 8 yeas.
“Trustees Proceedings.” Lansingburgh Courier. October 9, 1886: 3 col 4.

It is reported that the drama has been frozen out of the Casino even at this early day. The drama does not flourish financially amid solitude. And so the Muse gathered up her drapery and skipped to more congenial shelter, thus enabling Manager Oliver to boast of the briefest dramatic season on record in this vicinity.
“Notes About Town.” Lansingburgh Courier. November 20, 1886: 3 col 2.

A Builder’s Assignment.
George W. Oliver, carpenter and builder, made an assignment this morning to Frank E. Howe. The assignment directs first, the payment of the expenses of the assignment; second, the payment of employés wages; third, the payment of borrowed money to Nina Oliver, and fourth, the payment of all other creditors pro rata. Mr. Oliver was the lessee of the Casino rink. The liabilities and assets are not known. Several liens on Mr. Oliver’s interest in contracts for erecting houses for Delia M. Hotchkin, the Smith estate and William F. Burden, the liens being in favor of creditors, were filed in the county clerk’s office to-day. Mr. Oliver’s failure is ascribed to his inability to give his business personal attention, he having been ill the last five weeks at his residence in Lansingburgh, and also to the trouble experienced in making collections. He was hard-pressed by creditors and, unable to meet their demands, he decided on the assignment. Mr. Oliver holds $,700 worth of stock in the Casino rink, and has, besides, $10,000 invested in the building in the way of alterations, improvements and skates and other personal property. He recently added a stage and scenery for theatrical purposes, but the venture was unsuccessful. The claim of Nina Oliver, his daughter, is said to be about $500 and is for borrowed money.
Troy Daily Times. January 11, 1887: 3 col 2.
Assignee’s Sale.
THE undersigned for benefit of creditors of George W. Oliver will sell at public auction at the carpenter shop recently occupied by said Oliver on Mechanic street, Troy, on Thursday, February 24, 1887. at 10 o’clock, A.M., all the property in said shop belonging to said Oliver at the time of the assignment. The said property consists of pine, hemlock and hardwood lumber, ash ceiling, nails, screws, carpenters’ tools, machinery, belting, benches, etc.
I shall also sell on Friday, February 25, 1887, at 10 o’clock A.M., at the barn occupied by Mr. Oliver, rear of No. 57 Second avenue, Lansingburgh, all the property in said barn formerly belonging to him; and immediately thereafter at the Casino skating rink, all the personal property therein. The property at the barn consists of two horses, two lumber wagons, one phaeton, one sidecar buggy, one two-seated dsleigh, robes, harness, etc. The property at the rink consists of skates, chairs, scenery, pictures, curtains, etc., the rink being one of the best furnished and equipped skating rinks in the country.—Feb. 11, 1887.
2-12-td FRANK E. HOWE, Assignee.