Middleburgh is a hamlet in the City of Troy, roughly from Grand Street north to the Piscawenkill (around Ingalls Avenue). Prior to Troy’s annexation of Batestown had been the Town of Lansingburgh‘s southern neighbor. By some descriptions Batestown was the northern part of Middleburgh thus making Middleburgh (for a time) partly in Lansingburgh and partly in Troy. 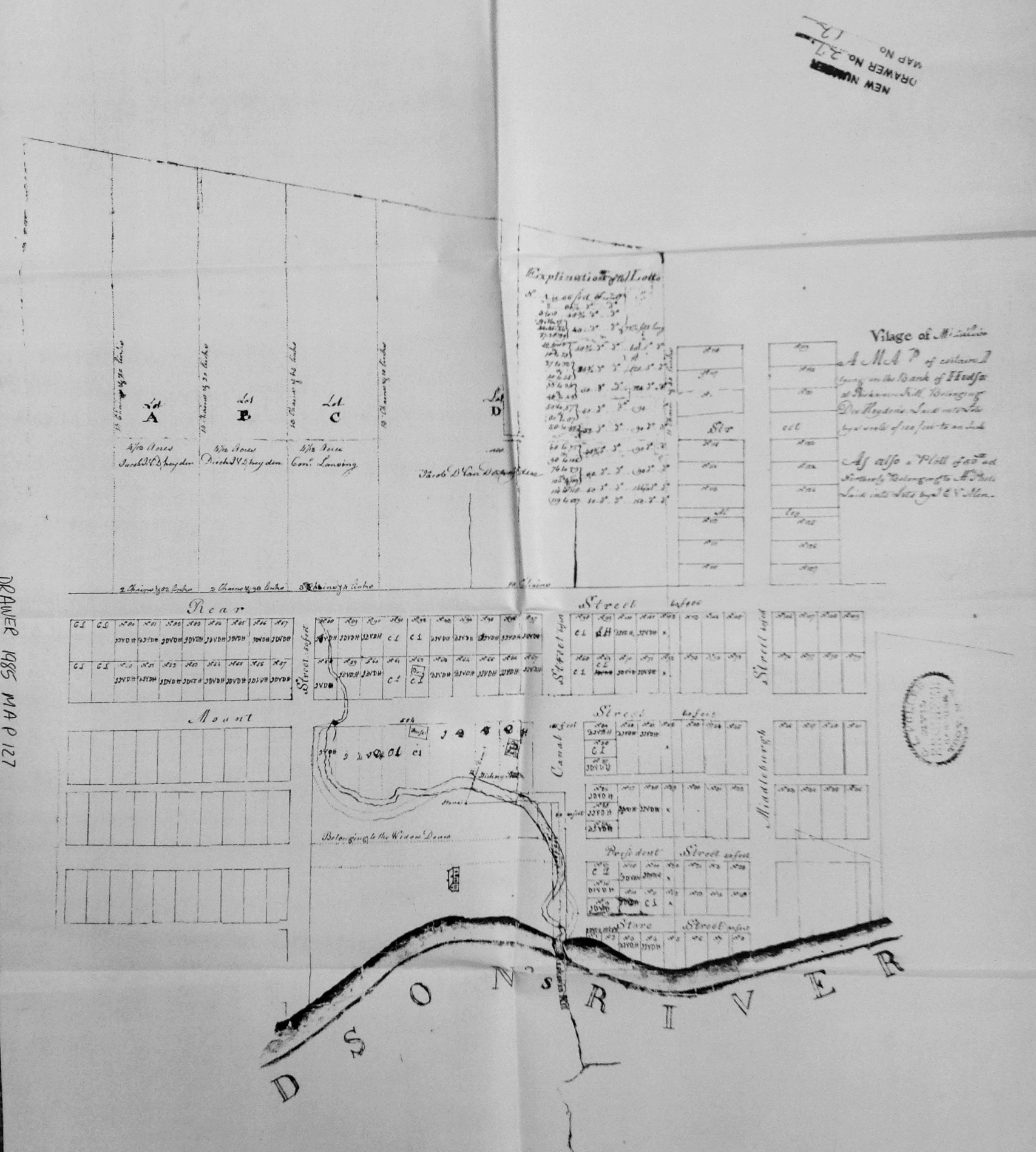 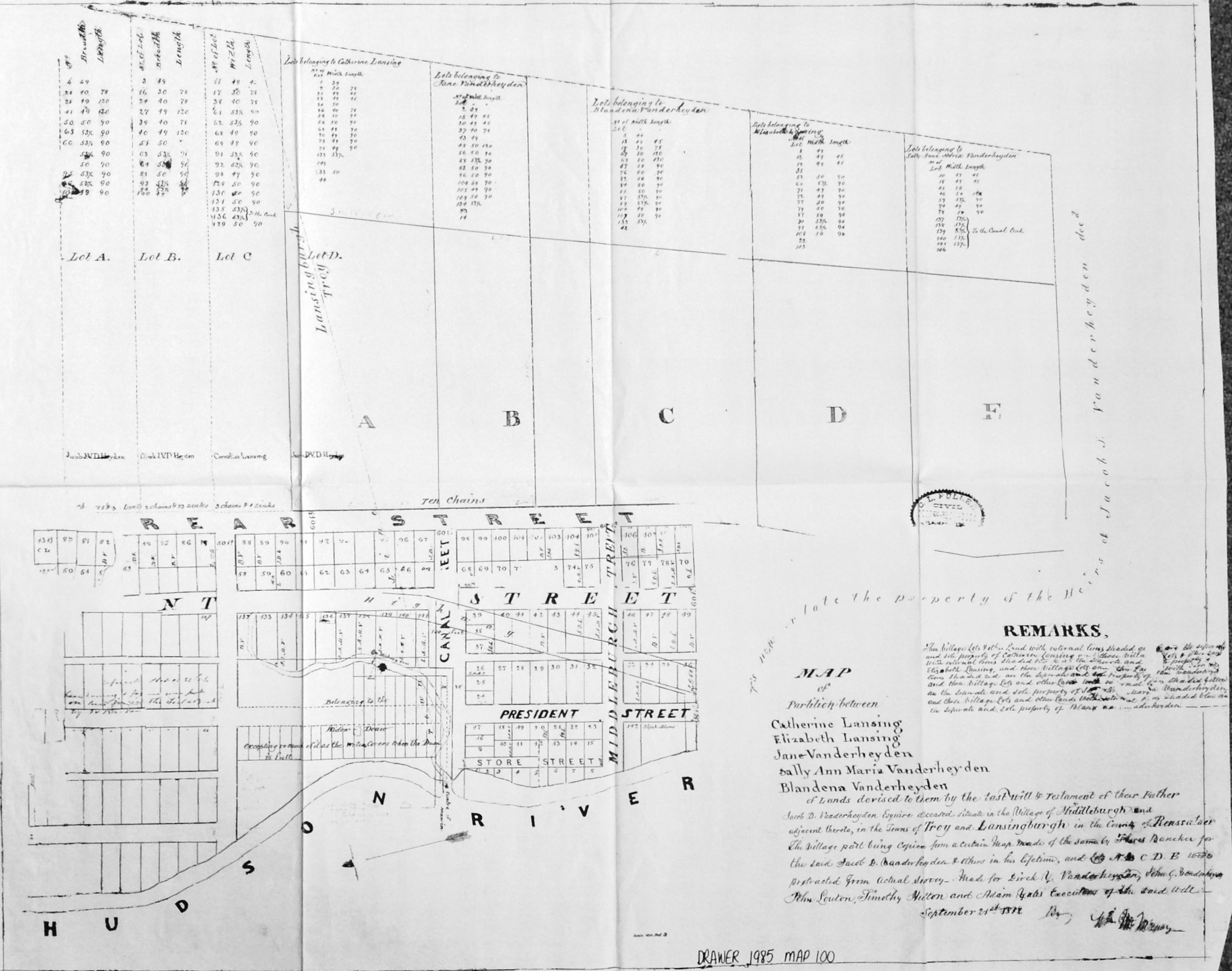 Map […] of Lands […] Situate in the Village of Middleburgh and adjacent thereto, in the Towns of Troy and Lansingburgh [1818?]

At a Meeting of the Common Council of the City of Troy on the First Day of November 1832 p…]
On Petition Resolved that a protecting Grocery License be Granted to Michael Conson for a Grocery to be kept in that part of the Fourth Ward called Middleburgh, and also a protecting License to James McDonald-
[Troy City Council Minutes] 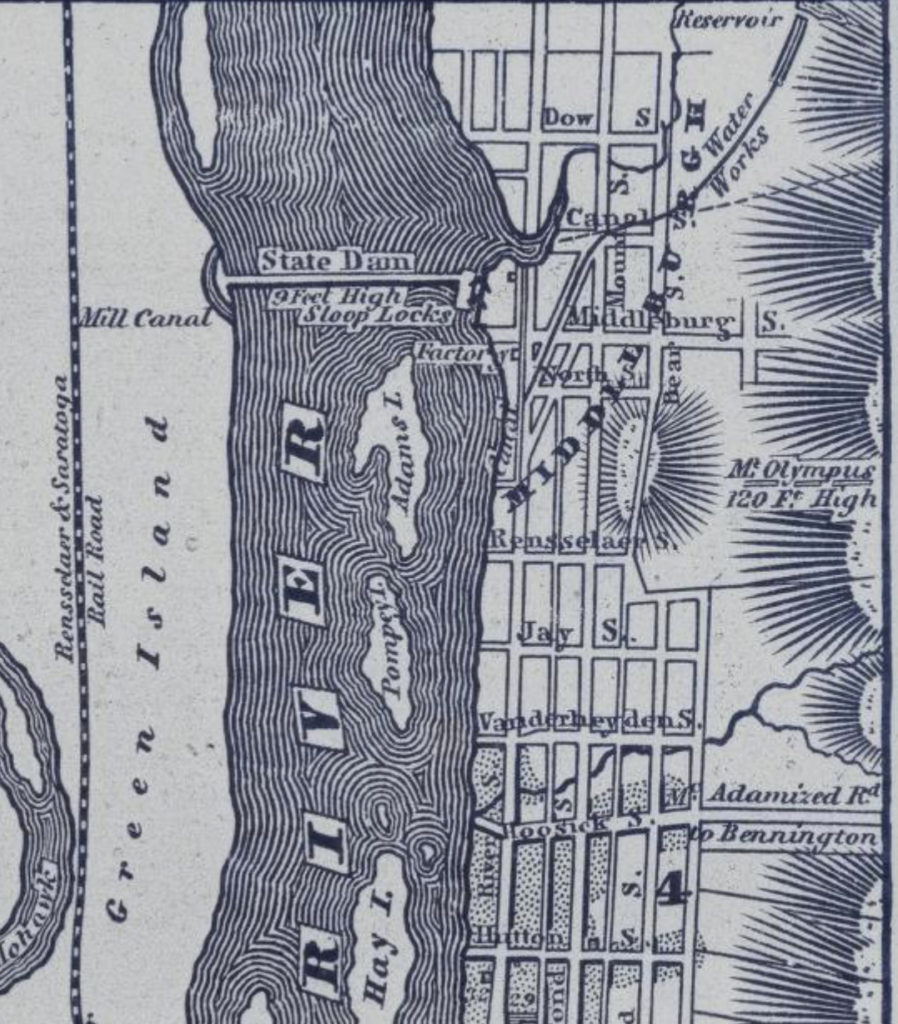 The board appropriated $22 99 to Amos Eaton to pay the expenses of advertising and selling three lots in Middleburgh (the old Bank lots) sold in consequence of an unproper return to a warrant made by the collector of the Third District, issued to him to collect an assessment made on said lots for the improvement of River street.
“Common Council Proceedings.” Troy Daily Whig. September 10, 1836: 2 col 3.

Mr. Assistant Slade called up the petition for reconsidering the vote of the Board, of the 6th July, in relation to the Market Stall in the Seventh, with a view of changing the location of the stall from Middleburgh to the foot of Hoosick street, and moved to refer the subject to a committee. The motion to refer was lost, and subsequently the Board located the stall on lot No. 36 north of North Division street.
“Common Council Proceedings.” Troy Daily Whig. July 29, 1837: 2 col 3.

Mr. Alderman Sprague asked for an appropriation for building a Market House and Engine House on a Lot in Middleburgh, purchased for that purpose. The report was referred to the Aldermen of the Fourth and Eighth Ward to consider and report thereon.
“Common Council Proceedings.” Troy Daily Whig. September 11, 1837: 2 col 5.

$5 REWARD. LOST—A small Pocket Book, containing nearly $40, in bills chiefly on the Jersey City Bank, and on different Banks in Troy—supposed to have been lost Sunday evening, on the road between Batestown and Middleburgh. The finder will receive the above reward, by returning the same to the subscriber, opposite the State Dam, River street. ELI TOWNSEND.
Troy Daily Times. January 31, 1854: 3 col 1.

—“Yaaa-aaa! Gyout t’way!” is the current cry of the small boy, as he rides down the inclined sidewalk now-a-days. The boys must remember that the law allows them to coast [sled] on Middleburgh, Eighth, Federal and Grand Division streets, and no others.
“City Notes.” Troy Daily Times. December 19, 1876: 3 col 1.

COASTING ON THE STREETS.
A petition of H. McMillan and others, asking that coasting be permitted on Middleburgh, Federal and Grand Division streets, was referred to the committee on streets and alleys.
“Common Council.” Troy Daily Times. January 5, 1877: 3 col 3.

By Ald. Behan from the committee on streets and alleys—
Resolved, That the ordinance prohibiting coasting be suspended so far as relates to Middleburgh, Eighth, Grand Division and Federal streets. [Laid on the table.
“Common Council Proceedings.” Troy Daily Times. February 2, 1877: 1 col 5.