The 1850 US Census appears to have recorded no people born in Denmark living in the entire Town of Lansingburgh. In Troy’s Third Ward that same year there was but one Danish man, Lewis Miller; his wife Margaret was born in France, their children Lewis and John in New York. Across the Hudson River, in the Village of West Troy in the Town of Watervliet, there was likewise but one Danish man recorded, Charles H. Rosch; his wife Catharine was born in Pennsylvania, their children Eliza, William H. and Henrietta all born in New York.

On the 1860 US Census there apparently was but one first-generation Danish family in the Village of Lansingburgh, that of Christopher and Elizabeth Holtz and their daughter Mary.

The 1870 US Census likewise had a single family, albeit a larger one: Barnart and Anna Holdt and their children Forgen, Louis, Molly, Lewa, and Bearn. (The name Holtz from the 1860 census and Holdt from the 1870 census seem close enough that they could be variant spellings of the same surname?) However, there either must have been other Danish people living in Lansingburgh at the time whose place of birth was not recorded as Denmark (e.g. Danish-speaking people of Danish heritage who were born in Germany or elsewhere), or otherwise there must have been a significant number of Danish-born people who moved to Lansingburgh within the few years following the 1870 census, given what former Burgher Thovald Hansen wrote in the Journal of the Danish American Heritage Society:

While nothing definite can be said as to when the Danish immigrants began to settle in Lansingburgh, we do know that by the 1870’s enough had come so that they began to think in terms of a Danish church. There was already a congregation with a resident pastor at Perth Amboy, New Jersey, across from New York City. The pastor, A. L. J. Søholm, had only recently come there from the Midwest, where he had been a pastor of a Church Mission Society founded in 1872. Two years later, the name was changed to the Danish Evangelical Lutheran Church in America, the purpose of which was to work among the Danish immigrants. There was then a national body committed to providing spiritual leadership to the Danish immigrants. A letter was sent to Pastor Søholm, inviting him to come to Lansingburgh to conduct services. He agreed to this and, some two or three days after Christmas, he arrived in the middle of the night in a blinding snowstorm. The next afternoon, a Sunday, a worship service, with communion, was held with twenty adults present. In the discussion that followed, Søholm agreed to come once each month. When next he came on February 7, 1874, a congregation was organized and given the name Immanuel Danish Evangelical Lutheran Church.
Hansen, Thovald. “The Way It Was: Growing Up in Upstate New York.” The Bridge 32(1). 2009. 14. http://www.danishheritage.org/uploads/5/4/9/4/54945593/bridge_11375_vol_32-1_text.pdf

The 1880 US Census had fifty-eight people born in Denmark; the 1900 US Census, four hundred forty-eight.

The number of Danes who were second-generation or more could have been much higher, but prior to 1880 the censuses did not provide information about parents’ nations of origins. Online databases don’t seem to provide search capabilities specific to parents’ nations of origins, unfortunately – seemingly one would have to personally visually skim each census page in the relevant columns.

† † †
At det behagede den alvise Gud at bortkalde til sig min inderlig elskede Mand Andreas Nagel, etter et kort Sygeleie [Sygeleje], i sit 33. Aar, dette Sorgens Budskab meddeles herved fraværende Slægt ogVenner af hans dybtsorgende Enke.
Lansingburgh i Nordamerika 26. Febr. 1875.
Karen Nagel,
f. Tandrup
Dannevirke [Haderslev, Denmark]. March 20, 1875: 3 col 4. [That it pleased the wise God to call upon my deeply beloved husband Andreas Nagel, after a short illness, in his 33rd year, this message of sorrow is hereby communicated to the absent kindred and friends of his deeply-grieving widow. Lansingburgh in North America, February 26, 1875 Karen Nagel née Tandrup]
A Danish Church.
It is not generally known that the Danes hold religious services in the old Fox steamer house, on State street, Lansingburgh, every Sunday. A Danish minister from Michigan has lately arrived and taken charge of the church. The congregation is made up of Danes from Troy, Cohoes, West Troy, Waterford and Lansingburgh, and the services are all in the Danish language.
Troy Daily Times. September 25, 1883: 3 col 4.

—The first prize picnic of the Danish Benefit society of Lansingburgh, will be held at Young’s grove on Tuesday, June 30. A drawing for the prizes will take place at the grove at 7:30 p. m.
“Local News and Seasonable Jottings.” Lansingburgh Courier. June 11, 1891: 3 col 1.

TWO NEW CORPORATONS.
Two corporations which filed certificates of incorporation with the secretary of state yesterday have a local interest.
One is the Danish People’s Society and Sick Benefit Association of Lansingburgh which has the following directors: Charles H. Madsen, Siran D. Jensen, Peter Madsen, Christian Madsen, Peter Hansen, Christian Madsen, Peter Hansen, Andrew Anderson, S. Niles Sinberg.
Albany Morning Express. December 27, 1893: 7 col 2.
TO LET. […]
IN new Dania Hall, Fifth ave., [One hundred] Twelfth st., Lansingburgh, one corner store suitable for drugs, one large store on Fifth ave. and one [One hundred] Twelfth st; rent very reasonable. Inquire in Barber Shop on premises.
Troy Daily Times. September 17, 1896: 3 col 8.
Fire Alarm Boxes Changed.
The Fire Commissioners have decided to remove the striker on the bell at Firemen’s hall to the bell in the tower of the Powers opera house. The location of Firemen’s hall, near the river bank is such that unless the wind be favorable the sound of the bell can be heard only a short distance. The bell in Firemen’s hall weighs only 2,500 pounds, while the Powers opera house bell weighs 3,200 pounds. The change is the result of a petition signed by 100 of the largest taxpayers in Lansingburgh. The commissioners are awaiting the result of an effort to erect a tower upon the Danish church. Should the project be consummated the bell in Firemen’s hall will be removed to that church and a striker attached for use in event of a fire in the northern part of the village.
“Lansingburgh.” Troy Daily Times. September 17, 1896: 4 cols 1-2.

—The rooms of the Danish Sick Benefit Association [Dania Hall] have been newly furnished. The association has expended about $200 during the winter.
“Lansingburgh.” Troy Daily Times. March 10, 1897: 4 col 2. 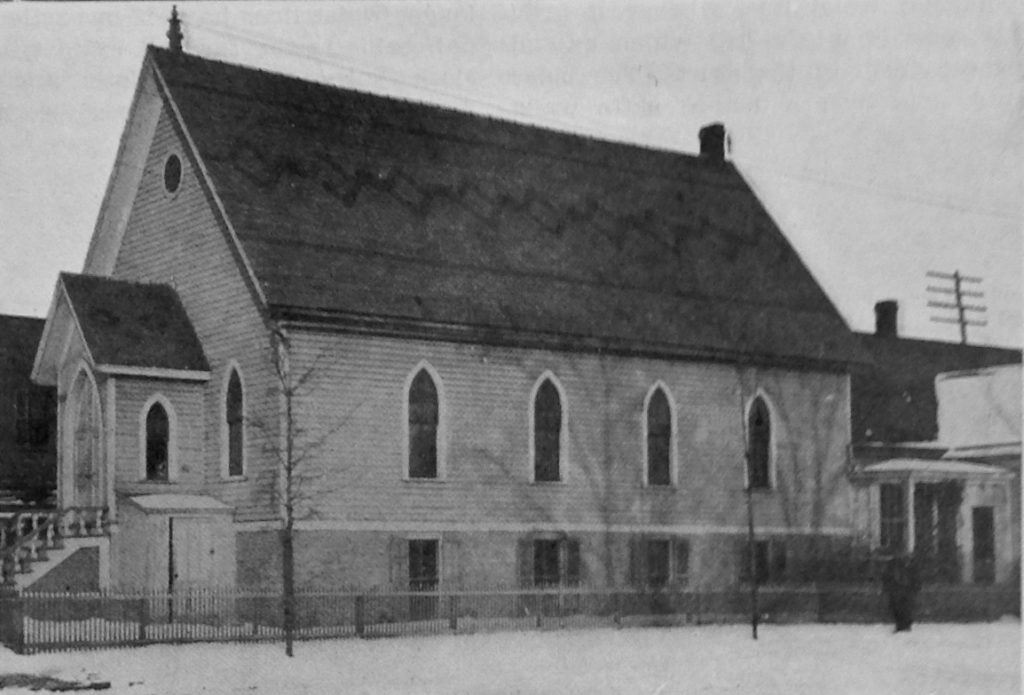 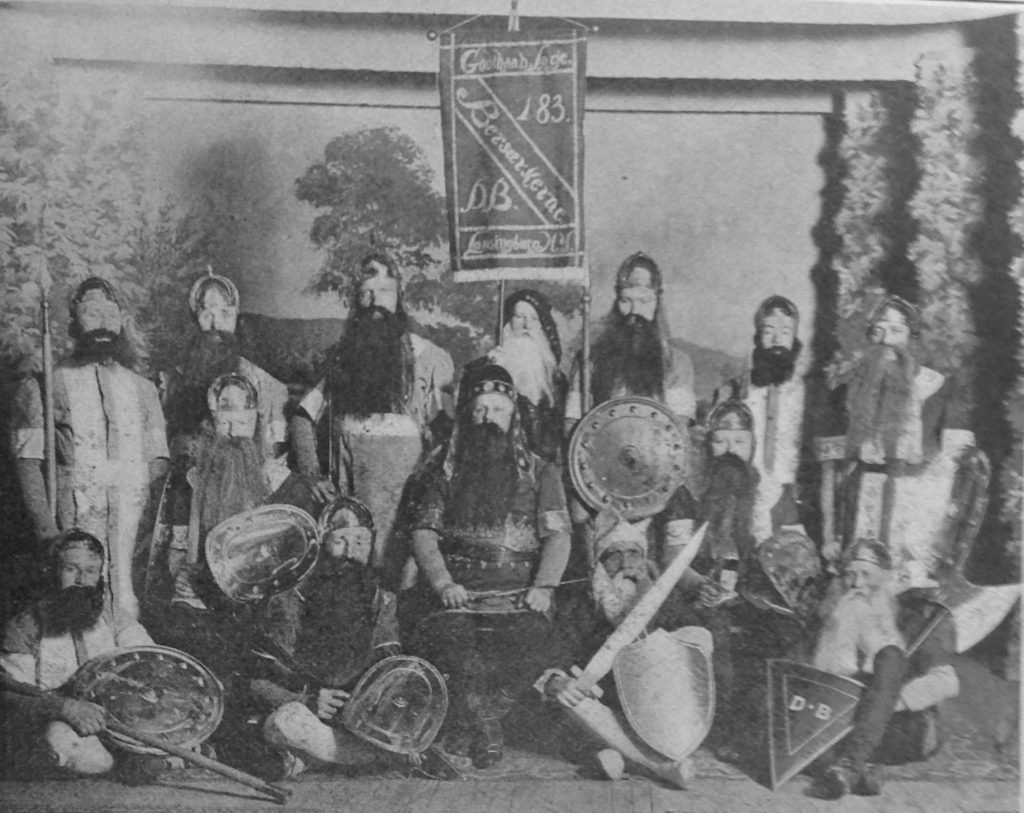 —The Trustees of the Danish Lutheran Church this evening will consider the construction of a new church building.
“Lansingburgh.” Troy Times. March 31, 1910: 6 col 1.

—The Building Committee of Godt Haab Lodge, Danish Brotherhood, Monday will meet in the home of W. Jensen, on Eighth Avenue, to arrange for a general meeting of the lodge February 1, when plans for the erection of a hall will be considered. The lodge will confer the Berserker degree upon a class February 8. […]

—
A Danish School.
A school for instruction in reading and writing Danish in a new department of the Danish Lutheran Church. Rev. Ole Jacobsen, who is in charge, hopes thus to retain the interest of the younger Danish-Americans in the country of their forefathers.
“Lansingburgh.” Troy Times. January 25, 1911: 6 cols 1-2.
Permits for Church Alterations.
Fire Marshal Hayne yesterday issued a permit to the Danish Lutheran Church of Lansingburgh for the erection of a new chapel on Eighth Avenue at an estimated cost of 29,000 and to the Trustees of Olivet Presbyterian Church for alterations to the church that will cost about $1,200.
Troy Times. July 18, 1913: 5 col 1.
LANSINGBURGH.
—
Invented a New Degree […]
John S. Beck, a member of Godt Haab Lodge, Danish Brotherhood, has the distinction of having originated a new degree for the Danish Brotherhood, which will probably be adopted shortly by the national organization. It is known as the Berserker degree and requires gorgeous [text lost in fold on microfilm] -tion. At the meeting of the lodge it will be proposed that the new degree be printed in a booklet form, containing about forty pages. The national office of the Brotherhood has agreed to sell the book. A manufacturer of lodge regalia will furnish the costumes.
Troy Times. November 6, 1913: 3 col 13.
Brotherhood Nominations.
Godt Haab Lodge, Danish Brotherhood, last night nominated the following: President, J. P. Christensen, F. Augustinus, Laurits Pflug; Vice President, Hans Nielsen, Fred Nielsen, Fred A. Beck; Recording Secretary, N. P. Christensen; Treasurer, Jorgen Bork; Trustees, Andrew Hermansen, Jorgen Bork, Paul Hansen, Hans P. Madsen, A. C. Hansen, Laurits M. Hansen; Leader, Christian Jensen; Inside Guard, John Anger, Charles Boysen; Librarian, Fred Christensen. It was decided to print 500 copies of the Berserker degree for sale to the lodges which desire them. One application for membership was received. The annual election of the lodge will be held December 4.
Troy Times. November 7, 1913: 6 col 2. 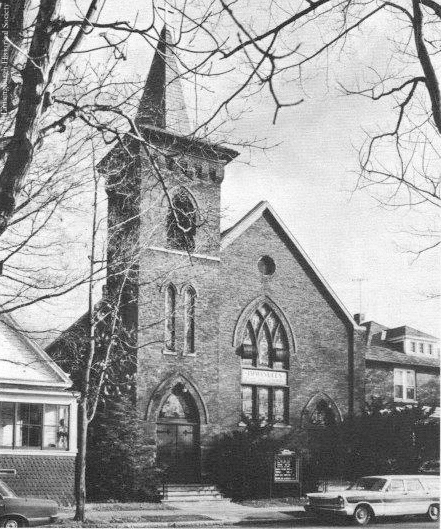