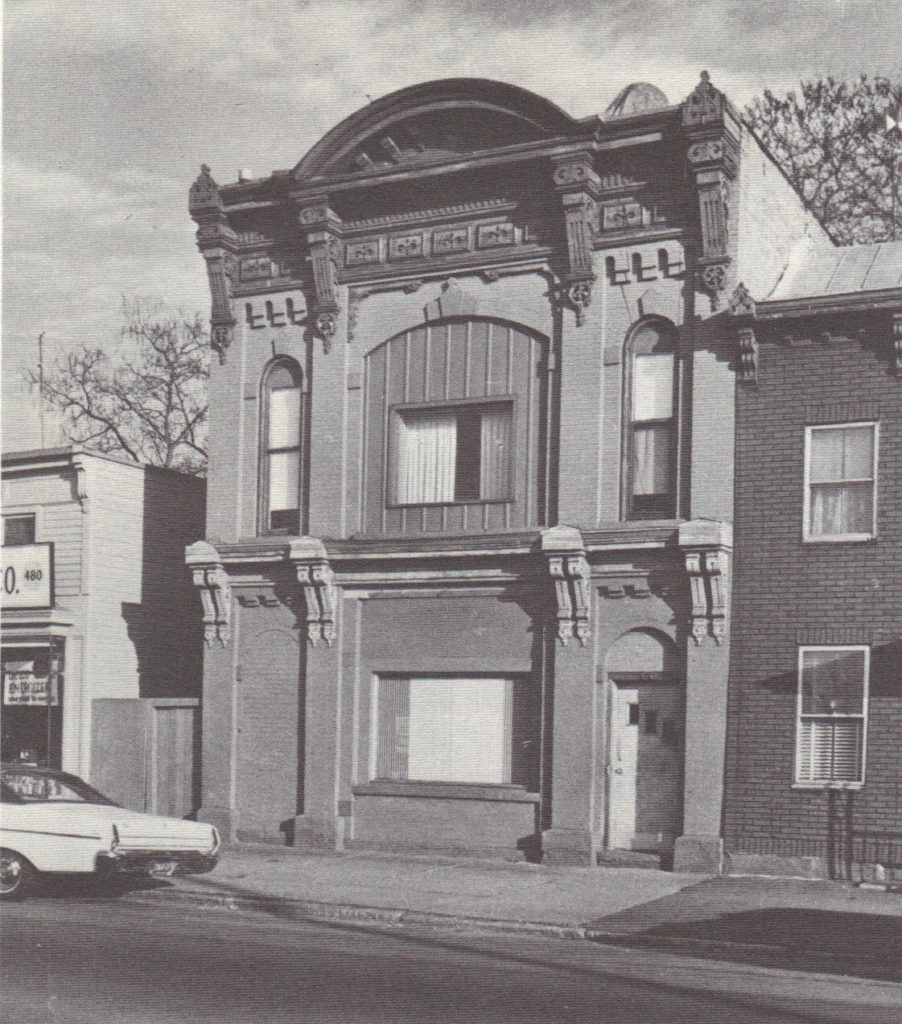 J. Fox Steam Fire Engine Company No. 2
478 Second Avenue
The volunteer fire department of Lansingburgh was founded in 1791. The J. Fox Steam Fire Engine Company was organized by fifteen men as a unit of the department in 1869. This fire house was built soon after the organization of the company and continued in use as a fire house until at least 1874, when the volunteer fire companies were replaced by a paid department. The building is typical of late nineteenth century urban fire houses in the upper Hudson Valley. An apparatus room was located on the first floor and meeting and social rooms for the company on the second floor. The principal facade of the building was symmetrical with a central apparatus door and a large second story window over it. Unfortunately both of these features have been removed. In later years the building was used by the New York Telephone Company as the first telephone facility in Lansingburgh.
Waite, John G. The Architecture of Lansingburgh, New York. Lansingburgh, NY: Lansingburgh Historical Society, 1976.

The new Fox steamer house is nearly finished, and is the pride of the company and an ornament to the street. the parlor is to be splendidly fitted up, frescoed, etc., and the boys have procured the necessary stamps to furnish it correspondingly. A. E. Powers has ordered from New York, as a present to the company, ten large pictures, and James H. Spotten has presented a valuable life size portrait of Abraham Lincoln.
“Lansingburgh.” Troy Daily Times. April 15, 1870: 3 col 4.

—The alarm bell is being placed upon the new Fox steamer house. The building is nearly finished, and almost ready for the apparatus. The sidewalk has been laid with the Scrimshaw pavement.
“Lansingburgh.” Troy Daily Whig. May 26, 1870: 3 col 5.

—A delegation from the Fox Steamer Company of Lansingburgh, came to Troy and purchased a Newfoundland dog. The dog evidently disliked to lose his vote by changing his residence just before election, and for about five minutes when we saw them on River street, it was about an even thing between him and “Billy,” each at his own end of the rope.
“Homespun.” Troy Daily Whig. October 26, 1870: 3 col 2.

☞ LANSINGBURGH.—The Fox steamer company have engaged the celebrated South American traveler, G. W. Wilber, to lecture in their behalf. Subject: “Travels in South America.” The lecture will take place on Monday evening next, December 18th, at 7 1/2 P. M. In consideration of the object of the lecture Rawson Hall has been tendered them gratuitously. The citizens will have a rare treat. Mr. Wilber has the reputation of being a lecturer of more than ordinary merit.
Troy Daily Times. December 14, 1871: 3 col 3.

Shall the Trustees sell the lot and building now occupied by the Fox Steamer Company on the east side of State street [Second Avenue] between Hoosick [113th] and Lansing [112th] streets and apply the proceeds towards erecting a new building for fire department and public use on the lot, situated on the northeast corner of River [First Avenue] and Market [115th] streets, thus reducing the amount necessary to be borrowed as contemplated by the first above proposition?
“Election Notice.” Lansingburgh Gazette. April 4, 1873: 3 col 3.