Given that the crossing itself was at-grade, there were several bad accidents at it. 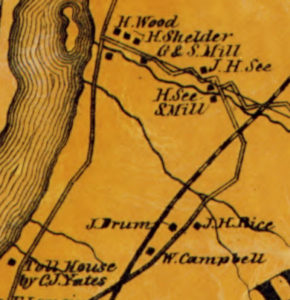 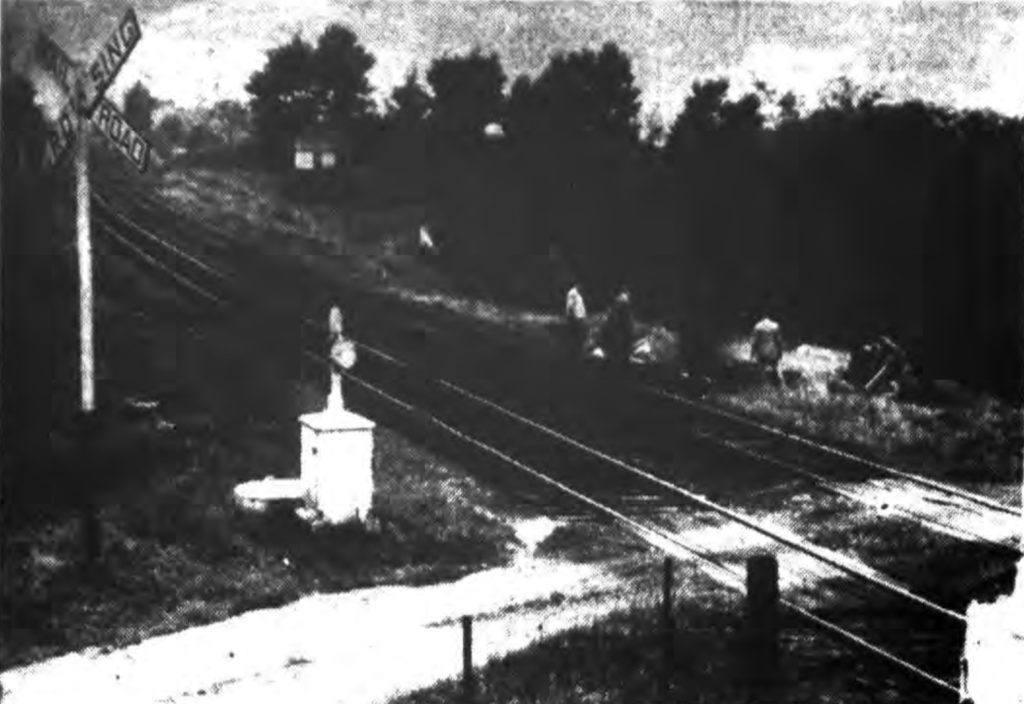 SUDDEN DEATH—Two were killed late yesterday afternoon at this crossing north of Speigletown by a south-bound Rutland R. R. train. Picture above shows the twisted car tossed to the roadside. The crossing, known as Flynn’s Crossing, is on a dirt road connecting the River Road with the Melrose highway.
Times Record [Troy, NY]. September 7, 1944: 14 cols 1-3. (From scan by Fultonhistory.com)

TWO BURNED AS FIRE BREAKS OUT IN BAGGAGE CAR
—
Quantity of Mail Destroyed by Flames at Speigletown.
A mail clerk and a passenger suffered burns and mail and baggage on Boston & Maine Train 55 was destroyed by fire at Speigletown this afternoon. The baggage car is insured for $20,000, officials said, and carried a large quantity of registered mail.
Chester F. Smith of 326 Glen Street, Malden, Mass., the mail clerk, said that the car carried “an exceptionally heavy load” of valuable mail. Ralph W. Herrick of Boston, the passenger, who is a railway employee on a six months’ leave of absence, was so seriously burned that he was taken to Troy Hospital for treatment. John F. McGowan of Brookline, Mass., baggage master on the train, which is known as the Berkshire Flyer, said that smoke was noticed coming rom the “jumper hose” and the mail car burst into flames shortly after. The mail car was the first behind the engine. All train traffic over the route was tied up for several hours.
The train was diesel motored and was near what is known as the Irish Crossing at Speigletown when the fire was discovered. The railroad line crosses a side road near the summer home of the late Dr. Reuben H. Irish of Troy.
The mail clerk said that he suddenly discovered one end of the car “a mass of flames” and pulled the stop cord. He was burned about the face and hands while attempting to save some of the valuable mail.
When he finally jumped from the burning car, he was in his shirt-sleeves and his shirt was scorched. His coat and overcoat were destroyed in the fire. He was armed and kept guard over the burning car.
The passenger, en route to Alaska, he said, attempted to help the mail clerk and also was burned about the face.
When the fire was discovered, the rest of the train was unhooked from the mail car. The train was bound from Boston to Troy and was due here at 1:50 p.m. The mail and baggage car burned with intense heat and finally set fire to the woods along the crossing. At 2 p.m. the Speigletown Volunteer Fire Department was called to prevent a serious forest fire.
One of the first on the scene was Neil J. Kelleher, employee of The Record Newspapers, whose home is in Speigletown. He obtained costs and first aid for the mail clerk and passenger.
Times Record. April 14, 1947: 1 col 2.
Railroad Crossings May Drop Signals.
(Staff Correspondent)
Albany—The Boston and Maine Railroad yesterday obtained authorization from the Public Service Commission to remove automatic protective devices from four little-used grade crossings of its Troy branch in the Town of Schaghticoke.
The crossings are at Madigan Road; Calkin’s Crossing; Irish Road (See’s Crossing); and River Road. (Mooney’s and Campbell’s Crossings). See’s Crossing is now protected by automatic flashing light signals and the other three are protected by automatic alarm bells.
The Troy branch extends about 16 miles from Johnsonville to Troy. For many years this branch was used by passenger trains operating between Troy and Boston and by freight trains connecting with the D&H and the New York Central Railroad in Troy.
In 1957 passenger traffic was discontinued and because of the abandonment of the Troy Union Railroad in 1963 all freight interchange movements over the Troy branch were discontinued. As a result, the only remaining rail service over the Troy branch consists of a local freight train operating between Mechanicville and Troy three times each week. Such trains consist only of a few cars operated at reduced speeds.
It was stated that the commission granted the petition for removal of the protective devices only after its staff had made field investigations and had deemed the railroad’s request to be warranted.
Times Record. September 11, 1964: 6 col 6.