Shaughnessy Square was a name for the wedge of land, or part of it, between 2nd and 3rd avenues between 105th and 106th streets. In 2017 Golds Auto is on the northern part of the square, the southern tip covered with something like juniper hedges and some brickwork. 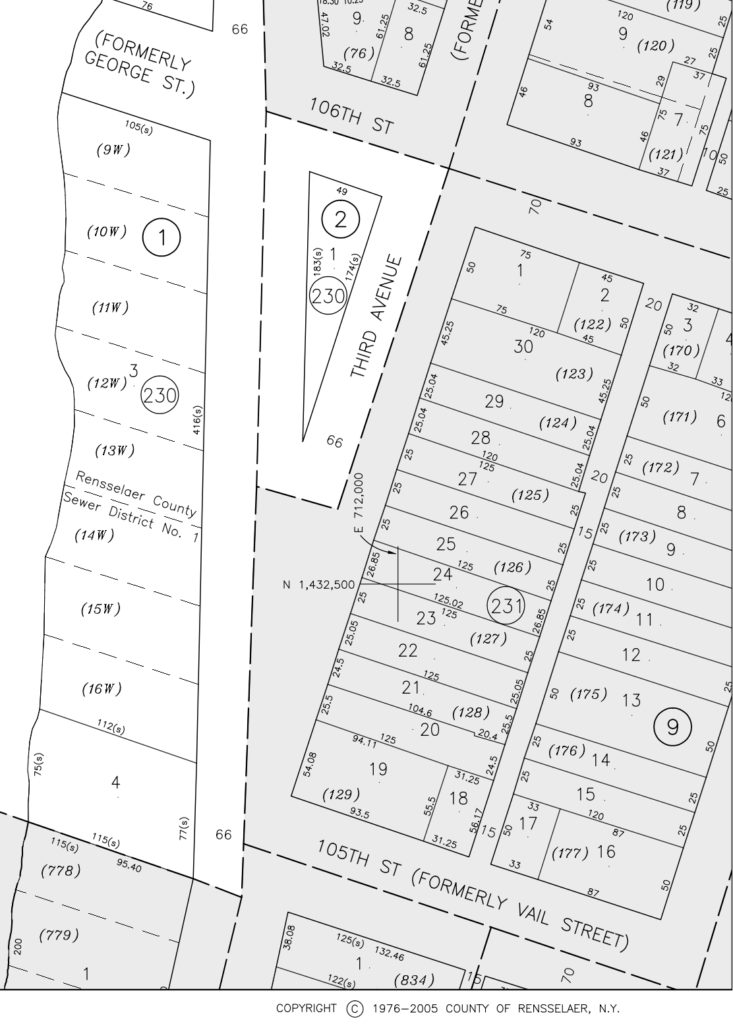 City directories and newspaper items at the end of the nineteenth century appear to indicate that that the map label “M. H. Salisbury” should probably be Michael K. Salisbury. His business was variously described as a grocery, a meat stall, or dried beef. The business shown in the map detail on the riverbank labeled “15,” was George F. Wood‘s Coal Office; the business at (One hundred) Fifth Street and Second Avenue on the riverbank labeled “22,” the Troy Yacht Club.

—
Shaughnessy Square.
Recently The Shaughnessy Ice Company erected a handsome office on the plat of ground between Fifth and Sixth Streets at the junction of Second and Third Avenues, Lansingburgh. Alderman Frederick thought the Common Council should take cognizance of the improvement tht has been made and introduced an ordinance, which was passed without a dissenting vote, providing that the plat of ground surrounding the office shall be known as Shaughnessy Square. A petition of property owners was presented asking that favorable action be taken.
“Fight Over Bath; Common Council Has Debate on the Matter of Hours for Lansingburgh’s Cleanup House—Paving of Stow Avenue—Shaughnessy Ice Company Has a Square Named After It.” Troy Times. November 19, 1915: 28 col 2.
Lansingburgh […]
General Mention. […]
—Conductors have the habit of calling out “Shaughnessy Square” when they come to Sixth Street and Second Avenue. This title was given to the street by the Common Council more than a month ago because of the expensive building that was placed on the old Flatiron Square by the Shaughnessy Brothers.
Troy Times. December 15, 1915: 2 col 3.
To Hoist Flag at Shaughnessy Square.
A seventy-five foot pole will be installed at the southern point of the triangle upon which the office of The Shaughnessy Ice Company are located some time next week, after which a beautiful American flag will be unfurled. There will be no formal ceremonies, however, and it is unlikely that anybody other than the officers and employees of the firm will be present. The Shaughnessy property is the most ideal location for the erection of a flagpole in the entire section, located as it is at the junction of Third and Second Avenues.
“Lansingburgh.” Troy Times. May 19, 1917: 2 col 5.
OIL COMPANY BUYS PROPERTY FROM COOPER ICE CO.
The Shell Oil Co. has purchased the office building and lands at Shaughnessy Square, Second Avenue and 106th Street, Lansingburgh from the B. Cooper Ice Co. and will erect an up-to-date gasoline filling station. In the proceedings the Cooper Co. was represented by its president, M. W. Shaughnessy.
Troy Times. January 18, 1930: 5 col 2.
Troy’s Seven Public Squares.
Would you believe Troy has seven public squares?
And the number of persons who can name all seven most likely wouldn’t fill the city’s smallest one. […]
Shaughnessy Square, located at the junction of 2nd and 3rd Avenues and 105th Street, is named after the family which operated the Shaughnessy Ice & Coal Co. at 249 2nd Ave. Lawrence Shaughnessy was president and Michael Shaughnessy treasurer.
The company harvested ice on the Hudson and Mohawk Rivers and stored it for the warm weather season in the days before the mechanical ice-making machines and refrigerators.
No record could be found when the Common Council made the designation because many of the city’s records were lost in the Oct. 28, 1938, City Hall Fire.
Parker, Joseph A. “Troy’s Seven Public Squares.” Troy Record. February 27, 1971: B4.