Young’s Grove had been a privately-owned park between 106th Street and 108th Street, and between Fifth Avenue and the railroad (now the Uncle Sam Bikeway), south of Rensselaer Park. George Young took over the lease of what had been Lutzelberger’s Grove in April 1874 and it was operated as Young’s Grove until sold in mid-June 1911 for building lots.

It does not seem to have had a racetrack like Rensselaer Park did, but Young’s grove was the site of baseball games, shooting matches, picnics, concerts, visiting circuses, and other activities including the occasional hot air balloon ascension.

There had been another place named Young’s Grove in the City of Troy in the Ida Hill neighborhood, on or near Pawling Avenue, in the 1860s, so instances of “Young’s Grove” occurring in Lansingburgh and Troy area newspapers prior to 1874 are probably in reference to that other one.

—Lutzelberger’s grove has been leased to George Young for one year by Thomas Neary, executor of the estate.
“Amusements.” Troy Daily Times. April 16, 1874: 3 col 3.

—The first annual picnic and gala day of the Troy curling club will occur at Young’s grove to-morrow. […]
—The picnic of the Volksfest Verein is taking place at Young’s grove to-day. A street parade, with gaily decked wagons, accompanying the society, was made this morning.
Troy Daily Times. August 21, 1876: 3 col 3.

Amusements.
—The first annual picnic of the Sons of Veterans is being held to-day at Young’s grove.
—The annual picnic of the Zion Sabbath school will be held at Young’s grove on Thursday, August 12.
Troy Daily Times. August 10, 1880: 3 col 2.
Their First Reunion—A Regiment with an Eventful Record.
It is expected that 175 survivors of the one hundred and twenty-fifth regiment, New York volunteers, will be present at the reunion of the association at Young’s grove to-morrow. Invited guests from this city will also be present. The regiment will meet to-morrow morning at 9 o’clock at the city hall, and a parade will follow. Dinner will be served at Young’s grove and speeches will be delivered in the afternoon. Col. Crandall of Brooklyn, who is the senior officer, will be in command to-morrow. Capt. Morey of Colorado, Capt. White of Michigan, Capt. Treanor of Washington and Lieut. Col. Hyde of San Francisco are expected to be present. To-morrow will be the twenty-fifth anniversary of the departure of the regiment from this city and will be the first reunion of the association, which was organized last year. The company left in 1862 under command of Col. G. L. Willard, who lost his life on the battlefield, and returned under command on the battlefield, and returned under command of Col. Crandall. The regiment engaged in the following battles: Harper’s Ferry, Gettysburg, where Col. Willard was killed, Auburn Ford, Bristow Station, Robertson’s Tavern, Mine Run, Morton’s Ford, Wilderness, P River, Spottsylvania, North Anna, Tolopotomy, Cold Harbor, front of Petersburg, Jerusalem Plank Road, Deep Bottom, Strawberry Plains, Ream’s Station, Petersburg, Boynton Plank Road, Sutherland Station, Farmville and Appomattox. Col. Joseph Egolf of this city left with the second New York volunteers as first sergeant and afterward joined the one hundred and twenty-fifth regiment as first lieutenant, and in that regiment was promoted to major. Many valuable pictures and relics of the regiment are in the possession of Col. Egolf, Chaplain Simons will give a history of the regiment at the grove to-morrow.
Troy Daily Times. August 29, 1887: 3 col 5.

—President John L. Manny presided at the fifth annual banquet of L’Iroquois snowshoe club at Young’s hotel last evening. The races were postponed until some fair day next week, as the weather was unfavorable to the races yesterday afternoon.
“In the Societies.” Troy Daily Times. January 29, 1891: 3 col 8. 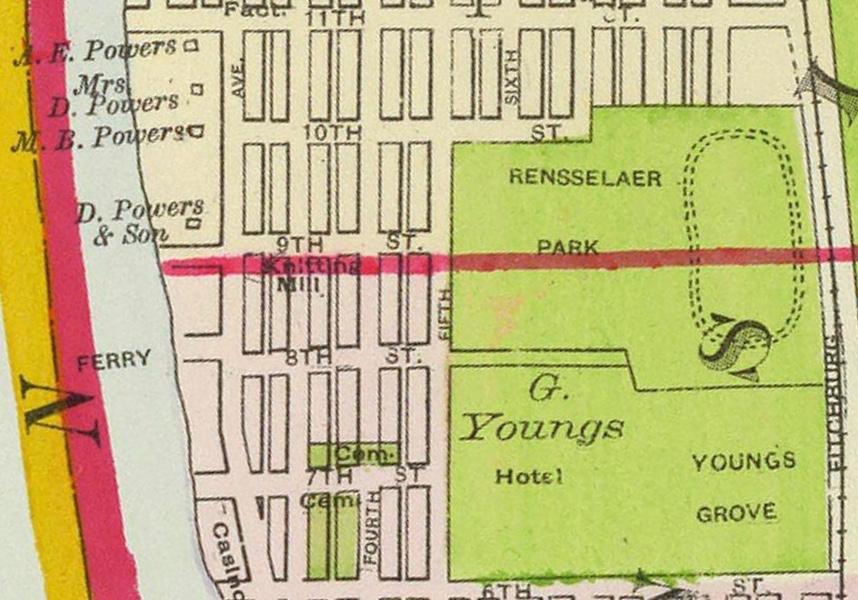 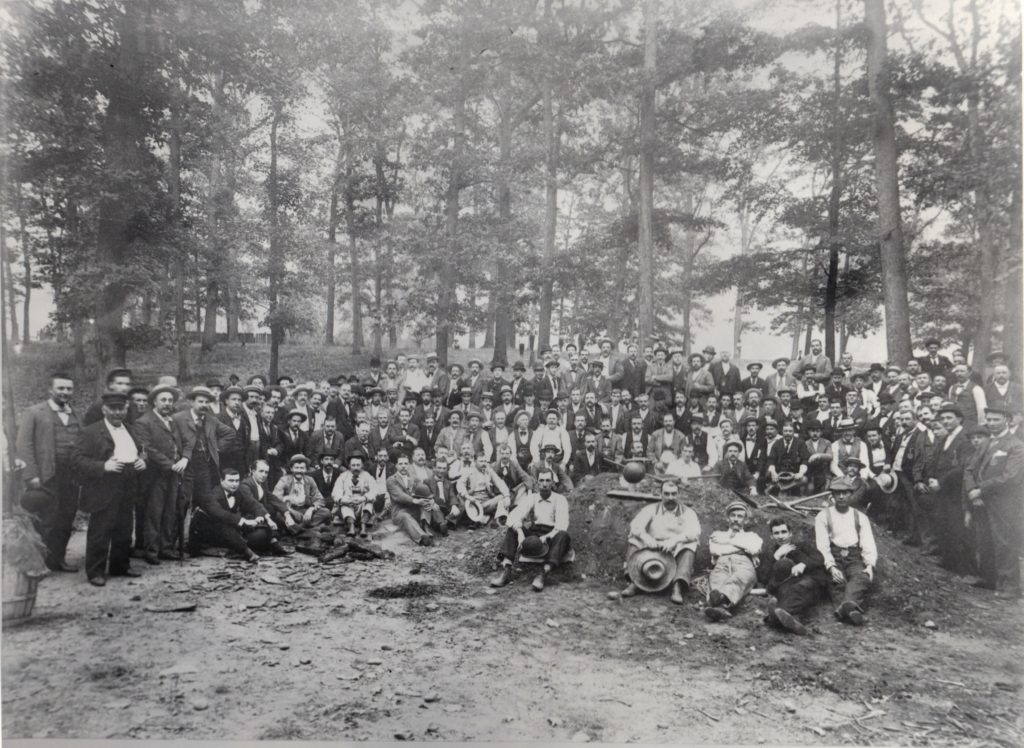 Among the Societies.
The Troy lodge of Elks will enjoy the annual clambake August 14 at Young’s grove.
Troy Daily Times. July 24, 1895: 3 col 5.

—Feliz Couchot, proprietor of Young’s hotel on Fifth avenue, Lansingburgh, has arranged for a lawn party to-morrow at Young’s grove. There will be a special program which will include dancing and other sports, between 2 and 11 o’clock in the evening. There will be refreshments served on the grounds and there will be music by a band.
Troy Daily Times. June 9, 1899: 3 col 3.

Entertained by the Elks.
The annual clambake of Troy Lodge, B. P. O. Elks, which occurred yesterday at Young’s grove, brought out a large number of members and friends of the organization. The weather was all that could be desired, and there was nothing to mar the pleasure of the afternoon. Early in the afternoon a game of base-ball was played, and some of the Elks proved themselves excellent ball tossers. Tables were set in the pavilion. The bake was under the supervision of James H. Golden, N. Bissonnette and William Meisner. A number of out of town members of the order was present, embracing a delegation from Albany, headed by Justice M. Severance, and including Congressman Glynn, Commodore P. Ronan, B. M. Ruth and George A. Hawley, Mayor Molloy and a number of other city officials were also present.
The committee of arrangements, which spared no effort to make the event enjoyable, included M. Organ, chairman; J. F. Cuerden, secretary; E. J. Walsh, treasurer; Louis Sessions, J. H. Quigley, William Bolton, Clarence Smith, M. A. Tarbell, T. J. Mooney and Wolf Gross, [microfilm scan clipped]
Troy Daily Times. August 30, 1899: 3 col 1.

—The annual clambake of Troy Lodge of Elks was held at Young’s Grove yesterday afternoon and was an enjoyable event. Many guests from out of town partook of the hospitality of the Troy Elks, and voted them royal entertainers. A band furnished lively music and there was dancing, and a program of sports. A “free-for-all” football game was an amusing feature. After the sports the Elks and their guests formed in line and marched behind the band to the pavilion, where the steaming clams and the accompanying good things were displayed.
“Among the Societies.” Troy Daily Times. August 30, 1900: 3 col 2.

—The North Troy Maenner Quartette is organizing for a moonlight picnic Wednesday evening. August 24, at Young’s Grove. [,..]
—Committees from the various Royal Arcanum Councils in this vicinity met with Lansingburgh Council last evening, and preliminary arrangements were made for a clambake and field day June 23 at Young’s Grove. One application for membership was considered during the meeting.
“Upper Troy.” Troy Times. May 26, 1904: 6 col 2. 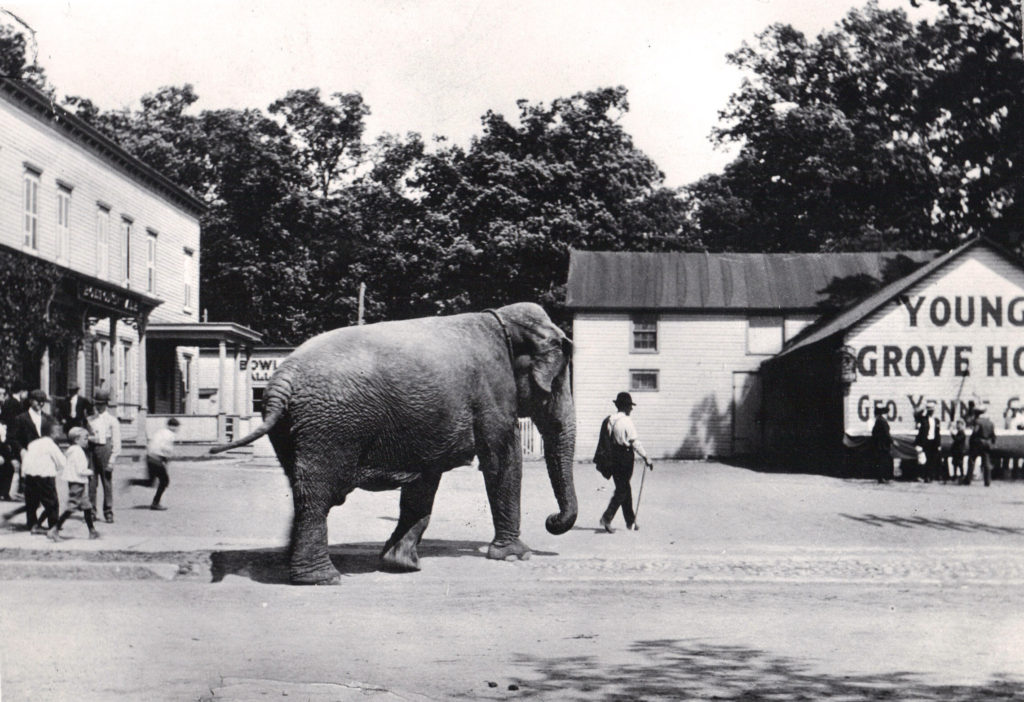 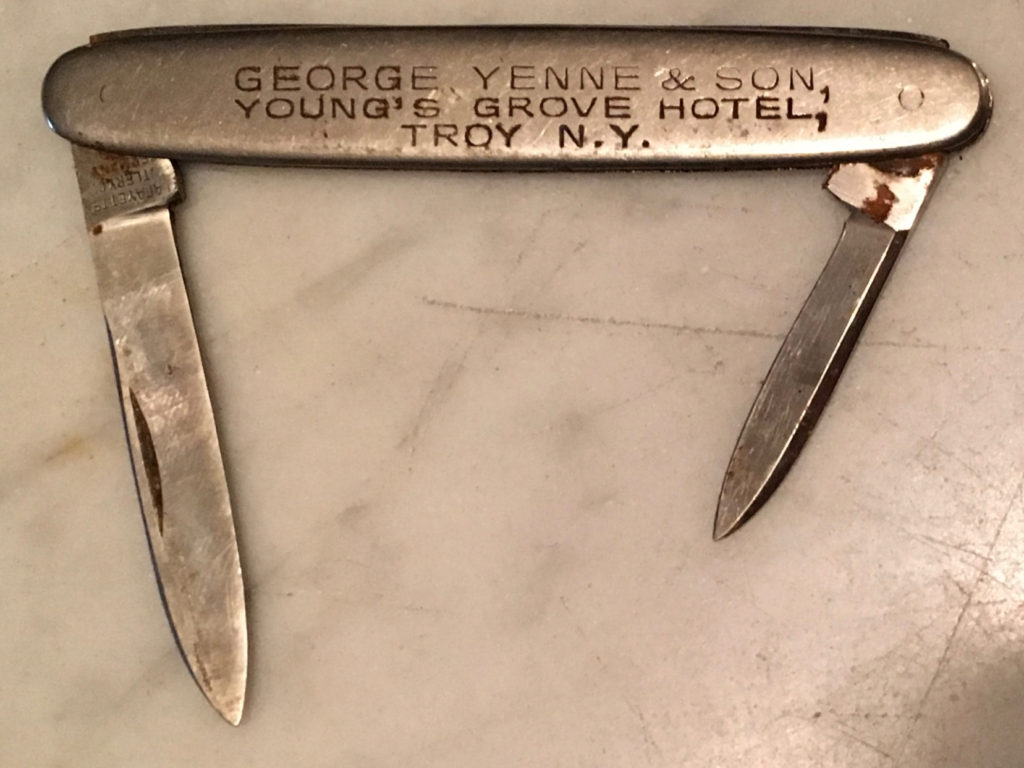 —The North End Rod and Gun Club will hold a regular meeting Thursday evening. Matters in connection with the erection of a camp at Round Lake will be considered. It is probable that the club will also decide to purchase an electric attachment for the traps at Young’s Grove.
Troy Times. July 29, 1907: 6 col 2.

—The North End Rod and Gun Club has decided not to remove the gun house from Young’s Grove, but will continue to have shoots there. It is planned to have one each month. The club at the meeting Monday evening will make preliminary arrangements for the opening of the summer camp at Coveville. A clubhouse will be erected there.
Troy Times. February 26, 1909: 6 col 2.

—Because of the rain last Monday the German Day festivities at Young’s Grove, Rensselaer Park, were rudely interrupted. They will be continued the coming Monday afternoon at 2 o’clock.
Troy Times. June 17, 1911: 5 col 1.

A LANDMARK GOING.
—
Well Known Young’s Grove Has Been Sold—A Favorite Picnic Place—Room for Residence.
The well-known Young’s Grove, long a landmark and a favorite local picnic ground, has been sold by the present owners, J. K. P. Pine, J. Wright Gardner and Mrs. James H. Nichols, to a New England land syndicate, which will run a street through it, and parcel it up into residence lots. Young’s Grove, called from the proprietor of Young’s Hotel, who owned merely the hotel site and leased the grove, was originally the old Vale farm, owned by George Vale, and descending to his son-in-law, George Gouls, and then again to a Mrs. Shepherd, from whom J. K. P. Pine purchased it in 1884.
Troy Times. June 19, 1911: 5 col 6.
Human Bones Found.
Officer Daniel Bird of the Fourth Precinct recently purchased a lot [281 Sixth Avenue, northwest corner at 106th Street] in the Young’s Grove section. Workmen commenced excavation in the lot a few days ago, and in the course of their work they found bones which, when gathered together, were found to be those of a human skeleton. A few pieces of iron, which appeared to be hand-made nails, were also found. Drs. Shaw, Sprague and Flynn examined the articles. The doctors decided that because of the size of the bones and appearance of the teeth the skeleton was probably that of a young girl. Some people believe the skeleton is that of an Indian girl, but Dr. Shaw emphatically stated this morning that there is absolutely no clew that would lead to that conclusion. He is of the opinion that the skeleton is that of a white girl, interred perhaps a hundred and twenty-five years ago. One fact which absolutely disproves the Indian girl theory is the finding of the iron nails, which prove the existence of a coffin. The Indians never used a coffin.
Troy Times. July 26, 1913: 6 col 2.

BOTTLING PLANT TO REPLACE HOTEL ON FIFTH AVENUE
—
Famous Hostelry of Old Rensselaer Park Days Disappears as Familiar Landmark.
The old Phelan Hotel, famed under that title and earlier, in the Rensselaer Park days, as Yenne’s Hotel, has disappeared as a familiar landmark at 108th Street and Fifth Avenue to make way for the new bottling plant which the Troy Coca Cola Bottling Co., will erect under plans which stipulate that the plant be ready for business by May 1.
A new building, with frontage of 150 feet on Fifth Avenue and 120 feet on 108th Street, is scheduled to replace to long frame structure which, in its heyday, was a sportsman’s center for Troy. […]
Times Record. November 22, 1940: 9 cols 1-7. 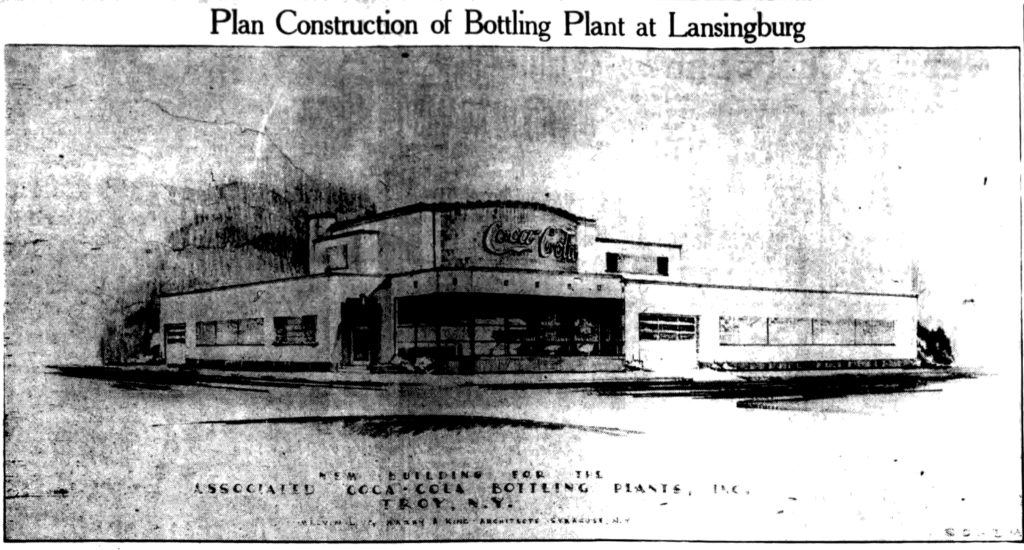 After May 1, this modern plant will occupy the southeast corner of Fifth Avenue and 108th Street, the new home of the Troy Coca-Cola Bottling Co. The building, as shown in the architect’s drawing will have a frontage on Fifth Avenue of 150 feet, with 120 feet frontage on 108th Street. It will have a light buff glazed brick exterior with colored terra cotta base course, sills trim and coping for contrast.
“Plan Construction of Bottling Plant at Lansingburg [sic].” Times Record. November 22, 1940: 9 cols 1-7.