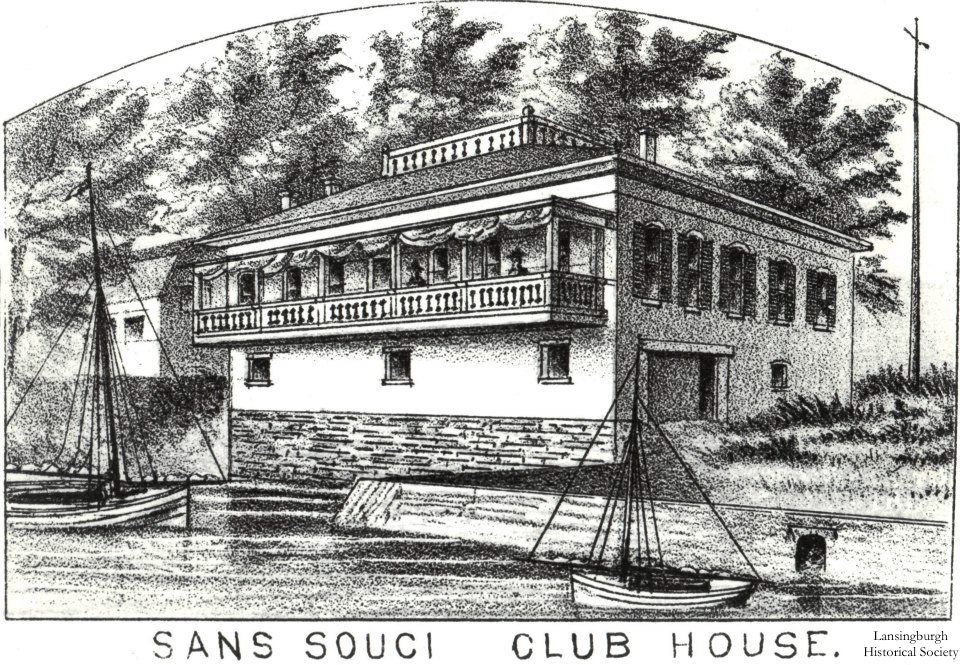 ☞ LANSINGBURGH.—[…] The Sans Souci club room is nearly finished. It is now one of the finest looking rooms in the village.
Troy Daily Whig. February 6, 1869: 3 col 2.

☞ LANSINGBURGH.—About 10 o’clock on Saturday night a fire was discovered in the wood-box in the Sans Souci Club Room and an alarm sounded. The firemen were speedily on the ground, but the flames were extinguished with a few pails of water. The fire was undoubtedly the work of an incendiary. It is but due to Mrs. Patrick Nolan, who discovered the fire from her sitting-room windows, which directly face the windows of the club-room, to say that had it not been for her timely alarm, the entire National Exchange Bank Building would have been consumed.
Troy Daily Whig. January 1, 1871: 3 col 3.

The Trustees, it is hinted, will occupy the rooms in the National Exchange Bank, adjoining the Gazette office which are now occupied by the Sans Soici Club—the club to either rent to them or remove on the first of May. Or at least that is what Madame Rumor says.
“Lansingburgh.” Troy Daily Whig. March 20, 1871: 3 col 3.

The Sans Souci club have placed in their rooms an elegant new piano, and last evening Prof. J. E. Haner entertained a company with some of his choicest compositions.
“Lansingburgh.” Troy Daily Times. May 28, 1872: 3 col 3.

SUBURBAN INTELLIGENCE.
—
Lansingburgh.
Extensive improvements are being made to the interior of the Sans Souci club house on River street. A grate fire place is to be put in position in the parlor, the ceilings and side walls are to be handsomely frescoed and decorated, and a general refitting made. A substantial crosswalk has been laid from the club house to the opposite side of River street.
Troy Daily Times. September 17, 1882: 2 col 5.

Repairs to the Sans Souci club-house are nearly completed. The entire interior woodwork has been repainted and the walls have been repapered and the new carpet laid, making the club-house one of the handsomest in this vicinity. The annual meeting of the club will be held November 12.
“Lansingburgh.” Troy Daily Times. November 1, 1889: 3 col 3.

Lansingburgh.
The Sans Souci club has purchased a handsome piano and last evening an impromptu musicale was given at the club-house. Delightful instrumental selections were rendered by Miss May Holmes and Professor Charles L. Catlin of Waterford.
Troy Daily Times. November 7, 1891: 3 col 3.

—The following officers were elected at the annual meeting of the Sans Souci Club last evening: President, Charles E. Hartwell; secretary, William J. Shelliday; treasurer, William M. Lea; managers, Edgar K. Betts, Charles R. Hill and George F. Wood. At the request of the former incumbents, Charles S. Holmes and William C. Groesbeck, a new president and secretary were elected. Mr. Holmes has served as president for thirteen years. Mr. Groesbeck was secretary of the Social Reading Room, organized in 1867, which was merged into the Sans Souci Club in 1868. He has been secretary of the club for twenty-three consecutive years. This is the senior club of Lansingburgh, and it is, as it has been during the long period, harmonious and prosperous in all respects.
“Among Club Members.” Troy Daily Times. November 13, 1896: 4 col 1.

—Albert K. Dickson is the possessor of a certificate signed by John S. Fake, president of the National Exchange Bank of Lansingburgh, April 29, 1869, and permitting the use of a room in the bank building situated at the corner of Richard and State streets for a stipulated sum. The room was to be used as a club room by the members of the Beatus Comes Club, an organization “of quiet and peaceable young men.” The sureties for the proper use of the premises were Albert K. Dickson, Eugene Davis, John Miter and Edward Hannah. The club flourished for several years and finally became the Philomathean Club, which later merged into the Sans Souci Club.
Troy Daily Times. February 9, 1897: 4 col 3.