CHAPTER 728
AN ACT to amend the parks and recreation law, in relation to designating the urban area at the confluence of the Hudson and Mohawk Rivers as the Hudson-Mohawk Urban Cultural Park and providing for a plan to develop a Hudson-Mohawk heritage trail
Became a law August 5, 1977, with the approval of the Governor. Passed by a majority vote, three-fifths being present.
The People of the Slate of New York, represented in Senate and Assembly, do enact as follows:
Section 1. Legislative findings. The area at the confluence of the Hudson and Mohawk Rivers is particularly rich in historical, cultural, natural and architectural resources. Because of its geographic location, waterpower and human creative genius, it experienced rapid growth as an industrial area during the early nineteenth century. The Hudson-Mohawk coastal area has been called the “Birthplace of America’s Industrial Revolution”. It exists today as a reservoir of historic and cultural lands and neighborhoods, waterways and edifices that constitute a unique and significant contribution to our state’s heritage. These cultural resources provide educational and inspirational benefits for present and future generations. They also offer areawide tourism, educational and recreational opportunities and, properly managed, incentives for economic growth.
The urban cultural park is a concept that broadens the traditional notion of a park from one tied to a limited location and use to an idea of a park as inextricably related to the total life of an urban area. The Hudson and Mohawk River area municipalities of Troy, Waterford, Cohoes, Green Island and Watervliet have adopted the urban cultural parks concept and have established the Hudson-Mohawk Urban Cultural Park Commission. It offers an appropriate and feasible framework for a comprehensive program of balanced community development under a theme that stresses community values, economic revitalization and the importance of continuity from our past to our present. The convergence of federal, state and local interests presents a special opportunity for intergovernmental cooperation.
The legislature hereby finds that interpretation, conservation, development, enhancement and use, by public and private entities, of the historic, cultural, economic, natural and architectural resources of the Hudson-Mohawk urban area are of vital significance to the furtherance of local, regional, statewide and national interests. State recognition of the significant urban resources of the Hudson-Mohawk communities and the urban cultural park concept will increase opportunities to enhance such resources and a basis for intergovernmental cooperation.
§ 2. The parks and recreation law is hereby amended by adding thereto a new section, to be section 13.27, to read as follows:
§ 13.27 Hudson-Mohawk urban cultural park. The area at the confluence of the Hudson and Mohawk Rivers encompassed in the cities of Troy, Cohoes and Watervliet, the villages of Waterford and Green Island and the town of Waterford shall be known as the Hudson-Mohawk urban cultural park in recognition of the unique and significant urban resources and cultural heritage encompassed by those communities. For purposes of interpretation, conservation and enhancement of the historic, cultural, economic, natural and architectural resources of the Hudson-Mohawk area, the Hudson-Mohawk urban cultural park commission is hereby designated as an appropriate entity to cooperate with the office and other state agencies.
§ 3. As a pilot program, the office of parks and recreation shall prepare a plan in cooperation with the Hudson-Mohawk urban cultural park commission for a heritage trail which will identify, designate and link the unique urban cultural and natural resources at the confluence of the Hudson and Mohawk Rivers.
Such plan shall be based upon the educational, recreational and tourism opportunities for the state, region and localities of such a trail and shall be done in consultation with the departments of transportation, commerce, environmental conservation, education and state. On or before October thirty-first, nineteen hundred seventy-eight, such office shall submit the plan with any appropriate supporting information to the legislature.
§ 4. This act shall take effect immediately.
Laws of the State of New York Passed at the Two Hundredth Session of the Legislature. Vol 2. 1977.

In the 1984 management plan for the UCP, the Melville House had been identified as a “key historic site” within the park and in fact “one of the most important sites in the UCP.” The plan stated that the Melville House “could, in the long run, be a house museum devoted to Lansingburgh’s history as a 19th century shipbuilding center.” (LHS does have information on the subject, but it is not the primary focus of the research collections or displays.) 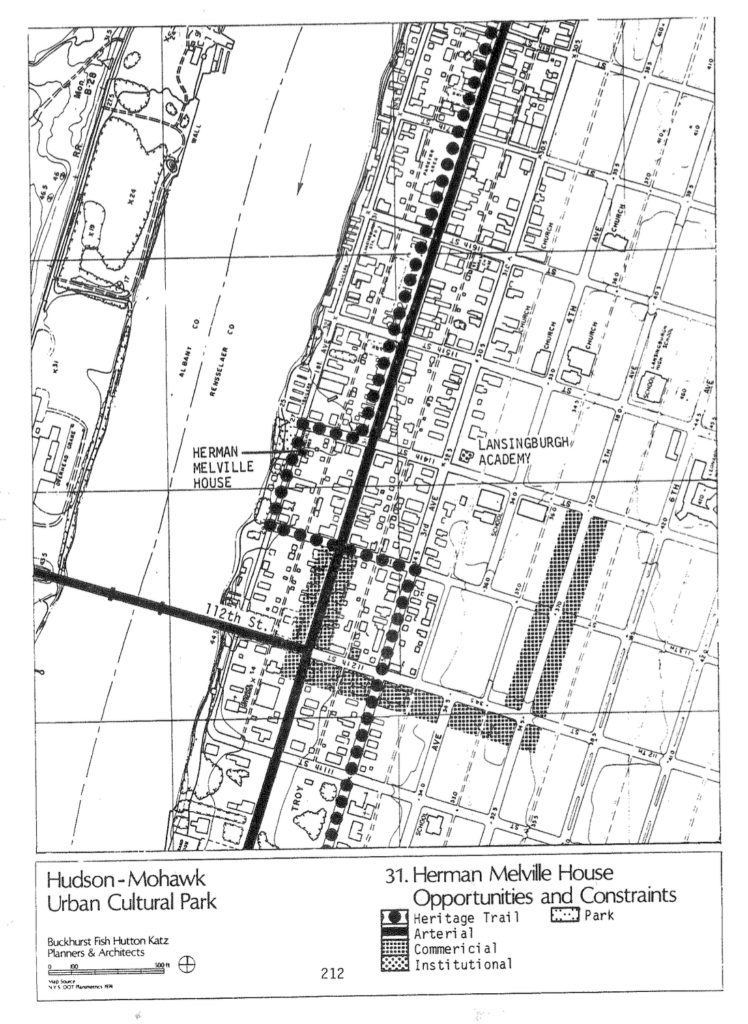