Ground Broken for $175,000 Lansingburgh Swimming Pool.
The first step in construction of a $175,000 municipal swimming pool for Lansingburg residents of the city of Troy was taken yesterday when Mayor Edward A. Fitzgerald turned the first spadeful of ground to permit the start of preliminary construction work.
The pool will be located at the southwest corner of Knickerbacker Playground, at the head of the Seventh avenue “dead end.” The ground which comprises the site has been deeded by the playground to the city.
A number of eager youngsters mixed with city officials and Water Bureau workmen for the ground breaking ceremony. Immediately after the first earth was turned, a city scoop shovel began active excavation. […]
Times Record. March 26, 1955: 7 cols 6-7.
Landscaping Bids Sought For Pool.
Times Record. May 25, 1955: 19 col 2.
Work Speeds on Swimming Pool in ‘Burg.
Times Record. June 17, 1955: 13 col 2.
Lansingburgh Pool To Be Dedicated.
Formal dedication of the new Lansingburgh swimming pool will be held Thursday at 6 p.m. at the pool, located at the head of 105th street near 7th avenue.
Times Record. June 28, 1955: 13 col 2.
Lansingburgh Swim Pool Dedicated.
Times Record. July 1, 1955: 7 cols 1-5. 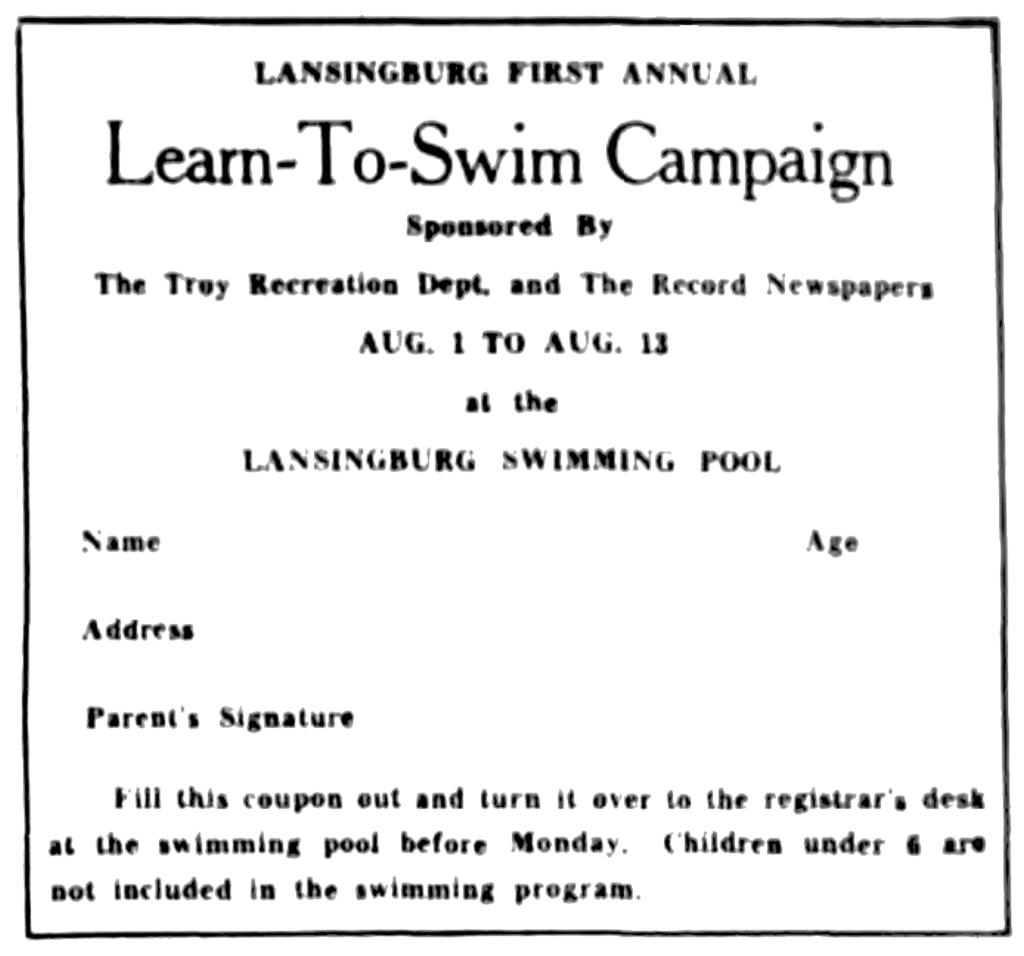 NAMING THE POOL
We think the naming of the Lansingburgh swimming pool the Knickerbacker pool was inevitable. It is placed upon land bought by John Knickerbacker and turned into a great playground. The playground authorities still retain reversionary rights. The pool could not exist were it not for the munificence of the late creator of the playgrounds and it is right that his name should be carried in its title.
Mayor Fitzgerald has placed a tablet on the bath house giving the name and the necessary facts. Those who go to the pool for a swim will always have before them a remembrance of the original giver—and those others who arranged that a portion of the grounds be dedicated to so practical a use.
Times Record. January 3, 1956: 10. (Editorial)