Hogle City, from the sole reference to it found in 1844, was a nickname for three homes that seem to have been around where 437 NY-40 is now, on the west side of the road somewhat north of Irish Road. There had been a toll gate just northeast of the intersection of NY-40 (the northern turnpike road) and Irish Road and the homes were just a bit further north than that. Given how many issues of newspapers from the 1840s have been lost, it’s difficult to judge how common the nickname might have been though it would seem to have been rare.

The three homes north of Irish Road were owned by a “Mr. Webster” and the 1854 Rensselaer County map shows an “S. Webster” in that area. The 1840 US Census recorded a Barnabas Hogle in the Town of Lansingburgh somewhere in Northern Lansingburgh six entries after Wooster Brookins; Brookins’ home was the one at 481 NY-40. In the Hogle household was a male between 50 and 60 and a female between 50 and 60 (probably Mr. and Mrs. Barnabas Hogle), a male between 20 and 30, and a male between 15 and 20. One of them was recorded as being employed in agricultural work.

Why the area would have been called Hogle City by anyone if Webster owned the homes is unclear. Perhaps Barnabas Hogle was a prominent citizen, or a colorful one. Hogles lived in Schaghticoke at least as far back as the 1840s, originating with Pieter Barent/Barnet Hoghill/Hogel/Hogle (abt 1718-1799).

Among the records of Hogles in the area are two baptisms in Schaghticoke (at which time the Town of Lansingburgh that extended up to the Deep Kill did not yet exist):

There was also a Francis Hogle recorded among the names in the so-called Lansingburgh Declaration of Independence of May 22, 1775. Francis Hogle was also recorded as an ensign in the 6th Company of the 14th Regiment of state militia on the roster of October 20, 1775.

Homes continued to remain in that area; on the 1871 map of the Town of Lansingburgh are recorded N. Taylor, I. Barber, and Mrs. M. Jones.

FIRES.
[…]
We also learn that three dwelling houses, situated a few rods above the gate, near Speigletown, on the northern turnpike road composing what is called “Hogle City,” were burned on the same morning. Mr. Webster was the owner of the dwellings, one of which was occupied by himself, and others by tenants. The loss must have been considerable, say $800 or $1000.
Lansingburgh Democrat. February 7, 1844: 2 col 3. 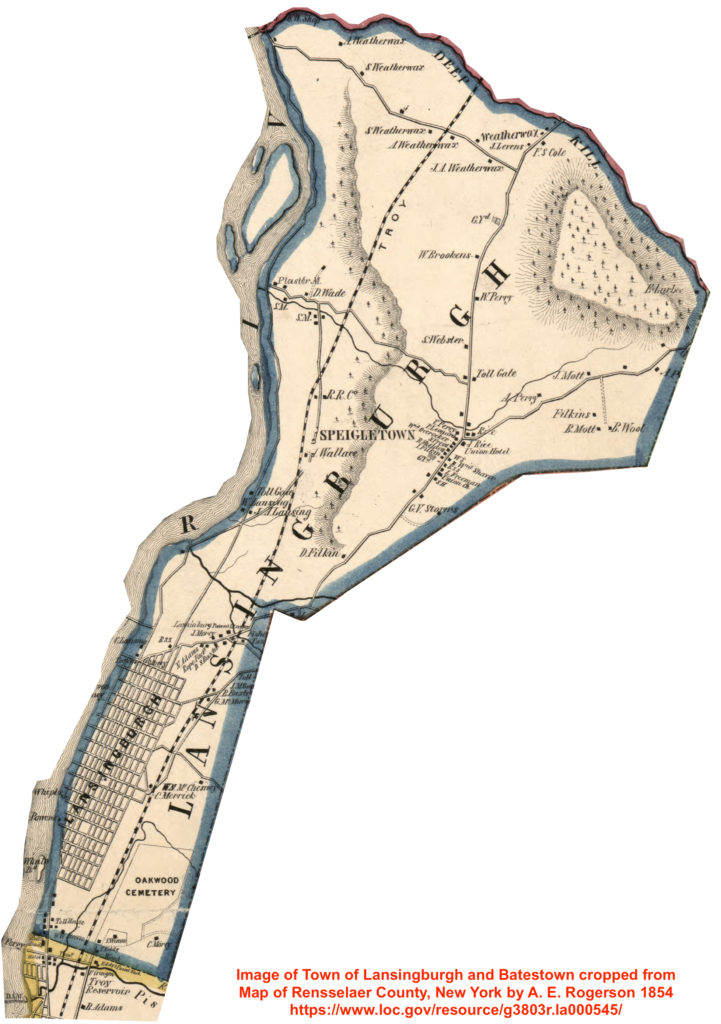