Cooksborough, a hamlet in the southwestern corner of the Town of Pittstown, just outside what was a northeastern boundary of the Town of Lansingburgh from 1819-1901. The name has also been spelled as Cooksboro and Cooksburgh. Michael Vandercook (1715-1786)’s purchase of Cook’s Patent in 1762 was contemporary to Abraham Jacob Lansing (1720-1791)’s purchase of the Patent of Stone Arabia in 1763, as was Vandercook’s development of Cooksborough in 1770 and Lansing’s development of the “Town and Borough” of Stone Arabia in 1771.

Michael Vandercook, the founder of the town [sic] of Cooksborough, New York, was of Holland descent, born in the province which to-day is the State of New Jersey, November 10th, 1715. He emigrated thence with his family, and patented land in Rensselaer County, New York, where they settled on what was called Cooks Patent in May, 1762. Here he founded the town [sic] of Cooksborough, and here he died and was buried in 1786. His name on the tombstone now standing in the cemetery at Cooksborough is thus written : “d Cook.” This Michael Vandercook married Cornelia Van Ness in 1742. This lady was born in 1721, and was a direct descendant from the famous Anake Jantz, whose estate includes the present site of Trinity Church in the city of New York, besides several millions dollars worth of property in that neighborhood. Michael Vandercook had five sons and three daughters, i. e. Michael, born — —; Simon, born August 17, 1749; Henry, born 1751; Hester, born 1752; Cornelius, born 1754, and Isaac, Cornelia and Sarah.
Knapp, W. Augustus. “Roberts Vandercook.” Early Days in California: The Growth of the Commonwealth Under American Rule, With Biographical Sketches of Pioneers, edited by G. W. Sullivan, vol. 1. San Francisco, CA: Enterprise Publishing Co., 1888. 162-163. 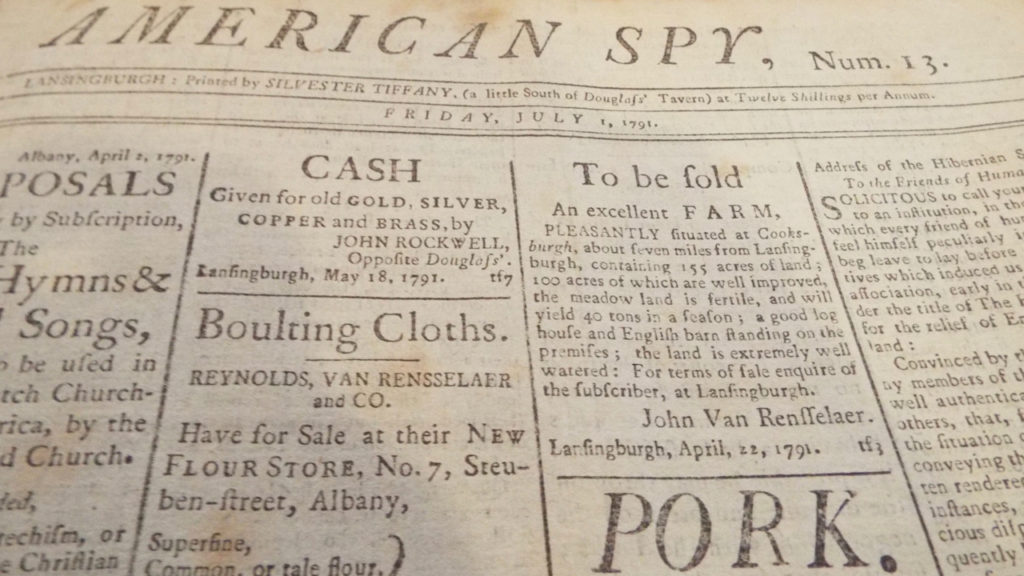 COOKSBOROUGH METHODIST EPISCOPAL CHURCH.
Some time previous to the year 1815 a Methodist society had been organized in the south-western part of the town of Pittstown. For a meeting was held in the church of this congregation in Cooksborough, on Friday, the twentieth day of January, 1815, at which Cornelius Filkins, Andrew Follett, William Haner, John Friot, Anthony Lockrow and Joseph Friot were elected as the trustees of the society, which was to be known by the name of the “Cooksborough Methodist Episcopal church.”
Weise, Arthur J. History of the Seventeen Towns of Rensselaer County: From the Colonization of the Manor of Rensselaerwyck to the Present Time. Troy, N.Y: Francis & Tucker, 1880. 93.

The town of Lansingburgh shall contain all that part of said county beginning at the mouth of a brook called Deepy kill, and running thence up along said kill to the westernmost corner of the grist mill now or heretofore of Michael Vandercook; then south twenty-three degrees west, to the north bounds of the manor of Rensselaerwyck; then along said bounds to a point one mile east of Hudson’s river; then southerly parallel to the said river, to the north bounds of the city of Troy; then along said north bounds to the bounds of the county; then northerly along the bounds of the county to a point west of the place of beginning; and then east to the place of beginning.
Report from the Commissioners Appointed to Revise the Statute Laws of the State of New-York, Prepared in obedience to a Resolution of the Hon. the Assembly. Albany, NY: Croswell, Barnym & Van Benthuysen, 1826. 103. https://books.google.com/books?id=04g0AQAAMAAJ&pg=RA1-PA103 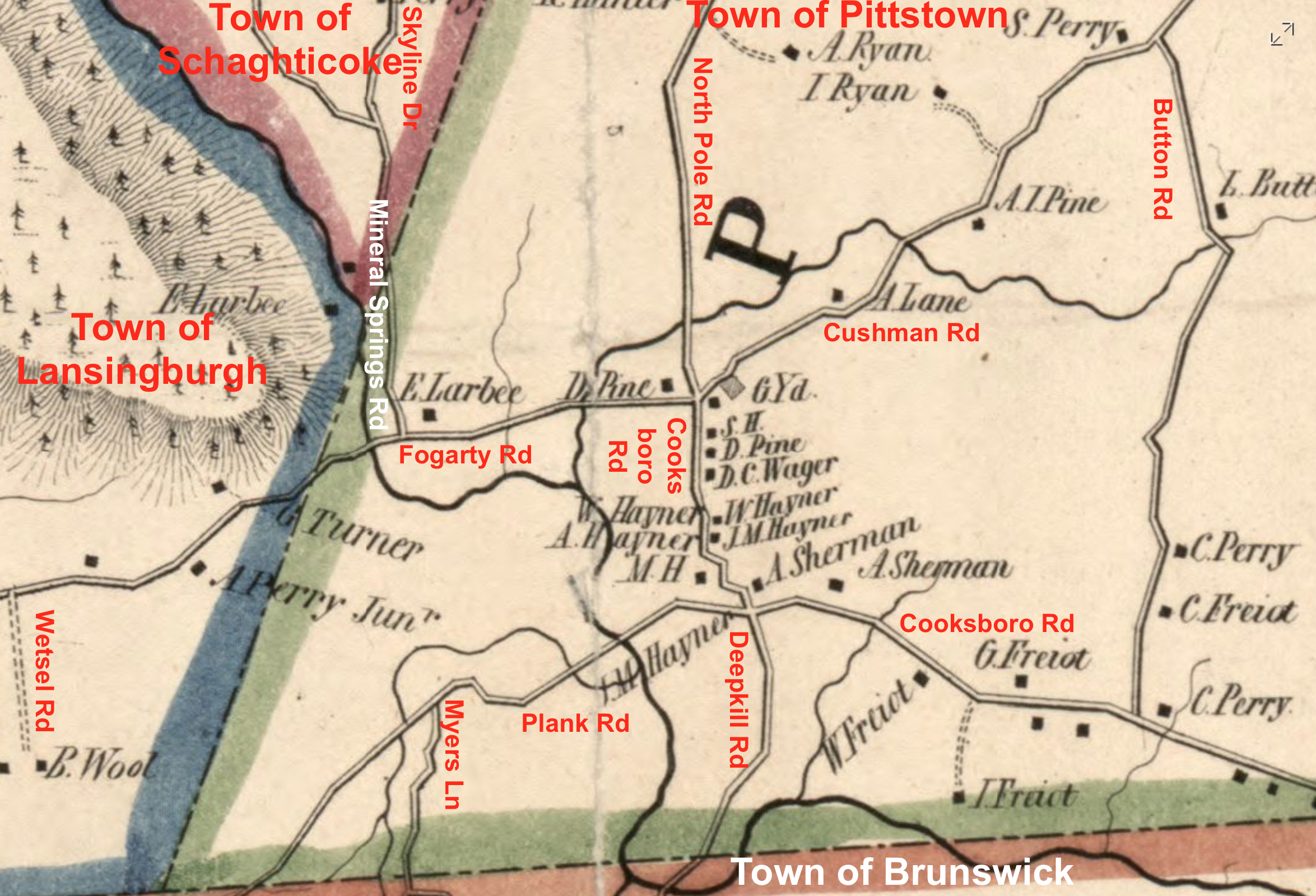 Cooksboro’.
CHURCH IMPROVEMENTS.
The congregation of the Cooksboro’ Methodist church have been engaged in remodelling and repairing their church edifice. A vestry has been built in the rear, extensive alterations have been made in the inside, and on the front, a new tower has been erected, the inside walls and ceilings have been kalcimined [whitewashed], the seats and woodwork grained, and the outside painted. It is to be carpeted throughout, the seats cushioned, and the pulpit, altar and orchestra refurnished. The reopening services will be held Wednesday, October 18. Rev. H. C. Farrar of the North Second street Methodist church of Troy will preach at 10:30 o’clock A. M., and Rev. George Skene of Hoosick Falls in the evening.
Troy Times. August 11, 1876: col 2.

RAYMERTOWN.—A meeting will be held at the Cooksboro Methodist Church Saturday evening to consider plans for the repairs of the church and parsonage property. All interested in the church are invited to be present.—The following are the newly elected officers of the Cooksboro Sunday School: Superintendent, C. D. Storm; Assistant Superintendent, W. E. Agan; Secretary and Treasurer, Joel Wager; Librarian, Emory Smith; organist, Mrs. Cora Ryan; chorister, S. H. Wager.
“Notes from Out of Town.” Troy Times. May 8, 1900

The old Cooksboro church, with a history of more than a hundred years, has been removed to a new site at Speigletown. It has been greatly improved—practically rebuilt—and is now a substantial well-equipped, and beautiful church edifice. The congregation worshipping in the old Union church at Speigletown has united in the new church movement, and the historic Cooksboro church is restored to a place in our list of appointments with promise of a new and larger usefulness. A noble and generous people constitute the membership of this church. No money-raising was necessary on the day of dedication. Toward the total cost of more than $6,000 a gift of $1,200 was received from Mrs. Russell Sage.
Wiseman, Eugene. “Troy District.” Troy Annual Conference Official Journal. NY: Eaton & Mains, 1907. 96-97.

COOKSBORO STUDENTS ATTEND REUNION
Ten former students of the Cooksboro School held a reunion Wednesday at the home of Charles E. Ryan of Cooksboro. Several of the guests had not met for 25 years and they enjoyed recalling incidents and pranks of school days. Mr. Ryan exhibited several copy books in his possession, which belonged to former members of the Ryan family who attended the school. The books, which are yellow with age, date back to the year 1800. The original school structure is still standing. […]
“Society.” Times Record. August 2, 1935: 3 col 2.

A couple properties in the Cooksboro area are on the National Historic Register: the Halford–Hayner Farmstead (Reference Number 12001132) and the Coletti–Rowland–Agan Farmstead (13000631).