The people of Pittstown are greatly excited over the proposed division of the town. A petition with the requisite number of names will be presented by Assemblyman Perry, the purport of which is to take a portion of Pittstown, Brunswick and Lansingburgh and make a new town, the same to be called North Lansingburgh.
Washington County Post [Cambridge, NY]. January 17, 1879: 2 col 5. 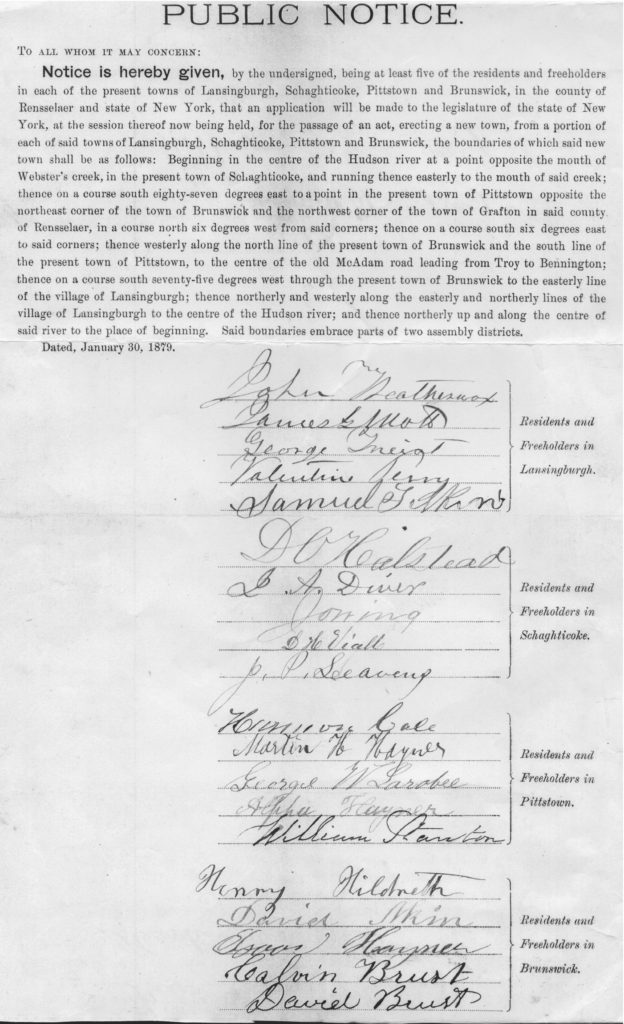 Mr. Perry, of Rensselaer, introduced a bill last evening to establish from the towns of Lansingburgh, Schaghticoke, Pittstown and Brunswick a new town, to be called North Lansingburgh.
Albany Evening Journal. February 18, 1879: 2 col 3.

A Charge that Demands an Answer.
The Hoosick Falls Standard makes a very grave charge against Hon. George L. Terry, assemblyman of the 1st dist., as follows:
In the assembly in this state there are two individuals who are not exactly twins, though their names resemble each other so closely that one is sometimes mistaken for the other. The individuals referred to are [Eli] Perry of Rensselaer and Terry of Washington counties. The difference between the sound of Perry and Terry on the floors of the legislature is not sufficiently great to enable members at all times to distinguish it, and by means of this similarity Terry of Washington was the other day enabled to perpetrate an uncourteous not to say grievous wrong upon his brother assemblyman Perry. Early in the session, Perry of Rensselaer introduced a bill for the erection of a new town to be called North Lansingburgh. The bill was a Rensselaer county measure and one eminently needful, and would doubtless have passed and received the signature of the Governor. But there were those interested in its defeat, and when every honest means to kill it had apparently failed, Geo. L. Terry of Washington county was found a willing tool in the hands of dishonest intriguers to accomplish its death. It appears—and we have it from good authority—that Terry went to Senator Davenport and represented to him that he was the author and champion of the bill and desired very much to have it recommitted, Davenport honestly made the motion, which was carried, as no one was looking for or anticipating the perfidy, and thus killed the bill. When charged with the treachery by Wheeler of the Times, Terry at first denied it, but subsequently admitted it. Has Terry made a little stake out of this dishonest transaction, or was he promised the senatorship next fall? It is supposed that the latter consideration furnished the incentive. After this the Republican party will do well to rid the legislature of at least one of its twins, and it will not be difficult to single out the guilty one.
If Mr. Terry was guilty of such a trick he has no chance of being Senator. Mr. Terry will answer for himself.
The Salem Press. June 6, 1879: 2 col 3.

MR. TERRY.
[From the Troy Daily Press.]
—
Mr. Terry who has been a member of assembly from Washington county for two years, was again put in nomination one day this week by a snap convention. Mr. Terry was last winter slated as the Republican candidate for senator. That he is not now pressed for that nomination is due to a certain occurrence in the latter part of the last session of the legislature. The reason which prevents him aspiring to the position of Senator should operate with the people of Washington county to prevent the re-election of Mr. Terry to the position of assemblyman. We have nothing against this person. He thinks he is strong but is really weak. He imagines himself fitted for leadership whereas his place is in the rear rank. But he is as nature endowed him and because he is weak and notorious for incapacity we do not oppose him.
This Mr. Terry is charged by Mr. Eli Perry, member of assembly from the second district in this county, with falsehood, mean and unmitigated. A bill introduced by Perry was pending in the Senate, for which when it was before the assembly, Mr. Terry voted. Mr. Terry, so Mr. Perry says, went to Senator Davenport, and allowing the Senator to understand that he was the author of the measure, asked to have it recommitted. To oblige him Senator Davenport had it sent back to the committee, and no power in Albany could get it back again. This incident was related months ago, and Mr. Terry was called upon to acquit himself of the charge of falsehood made against him by his fellow Republican assemblyman. He has never done so, and many of his constituents expect that he cannot do so. If he does not clear himself of the charge the honest, truth-loving people of Washington county will act wisely in permitting him to spend a winter in Sandy Hill, where he will be saved the expense of buying a new black broadcloth suit of clothes.
Salem Weekly Review. August 28, 1879: 2 col 2.