Union Bridge. The books for receiving subscriptions for the Stock, were opened in this village on Saturday last, and filled in the course of the day.—The building of the Bridge, we understand, is to be commenced as soon as the season will admit, and completed with all possible expedition.
Lansingburgh Gazette. March 8, 1803: 3 col 5.

Several early bridge builders, both European and American, recognized the strength of a bridge form that combined an arch with a truss. The Grubenmann’s Wettingen Bridge of 1764–66, Timothy Palmer’s Permanent Bridge of 1805, and Lewis Wernwag’s “Colossus” of 1812 all employed some combination of arch and truss to provide the necessary strength and stiffness for a wide river crossing. Theodore Burr was the first to patent such a form. Burr took out two patents in his lifetime, one in 1806 (no. 662X) and one in 1817 (no. 2,769X); both patents were destroyed in the patent office fire of 1836, but the 1817 patent drawing (figure 5.6) was recovered. Prior to settling on his 1817 patent, Burr spent several years experimenting with various truss forms. Among them was the 175-foot Waterford Bridge, built in 1804 across the Hudson River between Waterford and Lansingburgh, New York (figure 5.7). The bridge consisted of a parallel-chord truss with braces and counterbraces in each panel connected to a superimposed arch springing between the abutments. Around the same time that Burr was working on the Waterford Bridge, he erected a bridge over the Delaware River near Trenton, New Jersey, that suspended the deck below tied wooden arches using iron chains (figure 5.8). The Trenton Bridge was replaced in 1876 but was much respected and discussed by contemporary engineers. Burr’s Mohawk River Bridge at Schenectady, New York, built in 1808, was an experiment with a wooden suspension form (figure 5.9). While the bridge stood until 1873, significant deflections became a problem after only twenty years, and additional piers were needed to support the bridge at the middle of each span.
Christianson, Justin and Christopher H. Marston, eds. Covered Bridges and the Birth of American Engineering. Washington DC: National Park Service, 2015. 119-120. http://www.woodcenter.org/docs/CoveredBridgesAndTheBirthOfAmericanEngineering.pdf

Union Bridge Company.
—
Stone Masons Wanted.
THe Union Bridge Company wish to employ FORTY STONE MASONS, to build the Butments and Piers of a Bridge across Hudson’s river,between the villages of Lansingburgh and Waterford, the ensuing season; the work to commence on the first day of May next. None but good workmen need apply; to such liberal encouragement will be given, by application to either of the Subscribers.
JNo. D. DICKINSON,
CHARLES SELDEN.
Lansingburgh, March 5, 1804.
Lansingburgh Gazette. March 6, 1804: 3 col 5.

LANSINGBURGH, JUNE 19.
Union Bridge.—We observe with pleasure that the erection of the bridge over the Hudson, between this village and Waterford, is progressing with that rapidity which promises its completion early in the fall. The abutments and one of the three piers are already near finished, and the frames of the arches are in a state of equal forwardness.—The piers and abutments will be constructed entirely of stone; and there remains not the least doubt tbut that they will unite a degree of durability and strength sufficient to render the bridge secure against the effects of the ice in the spring seasons. The great convenience which the public will derive from the erection of this bridge, must ensure to the company who have undertaken it, the best wishes of the community for the success of the enterprize.—[Gaz.]
Visitor [New Haven, CT]. June 28, 1804: 3 col 2.

The UNION BRIDGE, lately erected over the Hudson River, between the Villages of Lansingburgh and Waterford, was on Monday last opened for passengers.
Albany Centinel. December 7, 1804: 3.

☞ Why cannot something be done in the way of reducing the tolls upon the Waterford Bridge. When the Union Bridge Company was chartered, a provision was made regulating the tolls upon the sliding scale. It is about time that bridge had become free, or that the tolls should be so reduced, that the amount realized should be merely enough to defray the expense of repairs, &c. A little attention to this matter would very much enhance the business of our merchants; the present rates of toll upon the Waterford bridge deprives them of a considerable portion of the trade of Saratoga county.
Lansingburgh Democrat. February 24, 1848: 2 col 1. 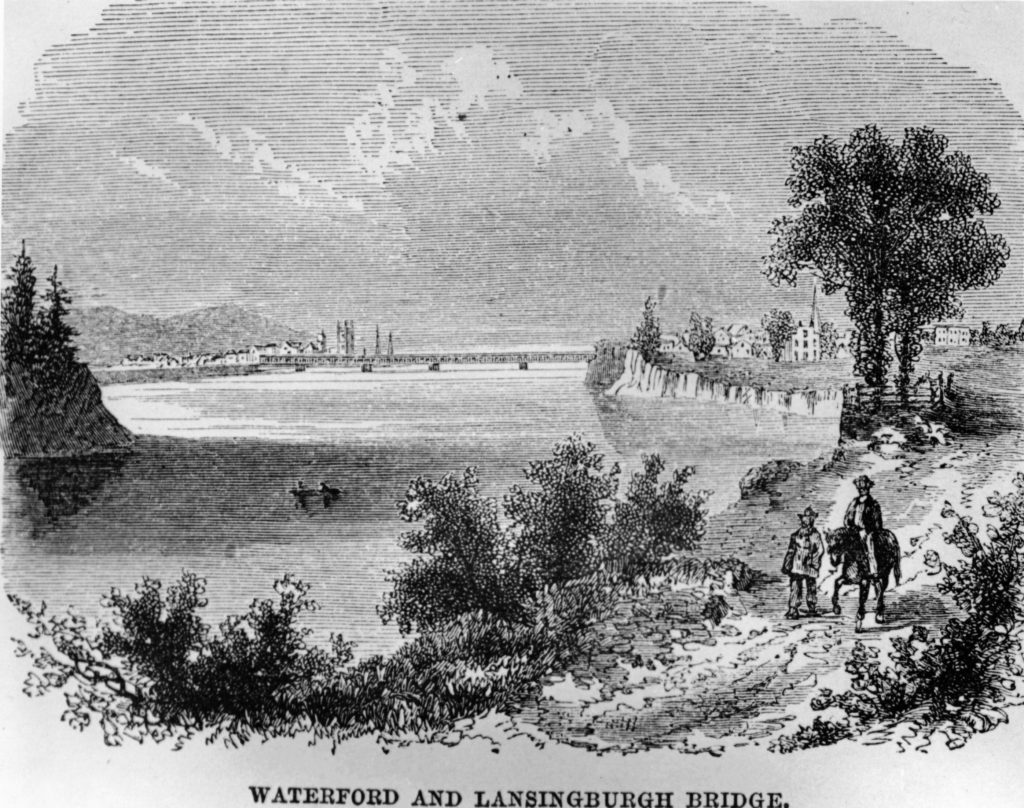 “Waterford and Lansingburgh Bridge.” Lossing, Benton J. The Hudson, from the WIlderness to the Sea. NY: Virtue and Yorston, 1866. 108.

OPENED FOR TRAFFIC.
—
North Side of Lansingburgh-Waterford Bridge Now In Use—Resurfacing to Be Completed Within a Month
Troy Times. August 11, 1922: 5 col 2.