The first person born in China known known to have arrived in Lansingburgh was Dr. Ah King. Some other Chinese people arrived in the 1880s, evidently relocating from other parts of the state and perhaps finding the environment in Lansingburgh less prejudicial (while still not entirely free of it). The Chinese Exclusion Act of 1882 (signed by the former Burgher, United States President Chester A. Arthur) would have meant those residents of Lansingburgh would not have newly arrived from China.

The racist, faux pigeon English in some news items (“-ee”) had been used sometimes by some newspapers in reporting supposed utterances by Chinese people going back at least to the 1840s. Whether the underlying events reported in such items had any truth to them is open to question.

MEDICAL.
Dr. Ah King,
LATE of Utica, native of China and a resident of the United States for the past seven years, has opened an office at 595 State st., Lansingburgh, for practice as a Botanical Physician and Surgeon, where he may be consulted by all persons suffering from any disease whatever. Particular attention given to diseases of Female and Children. ap18 1w.
Troy Daily Times. April 24, 1874: 4 col 4.

—A Chinese laundryman has dropped down upon us. Mong Chong is his name. Mon may be a velly nice laundelle man, alle same as Tloy laundelle girls are nice, but it looks as though he were rally “carrying coals to Newcastle.”
“Village Notes.” Lansingburgh Courier. July 11, 1885: 3 col 2. [Just as coal was a major Newcastle industry, so were laundries one of Troy’s early industries to the point of Troy being nicknamed Laundryville.]

What the Courier Would Like to Know. […]
—What Mong Chong thinks of Lansingburgh hoodlums?
Lansingburgh Courier. October 3, 1885: 3 col 3.

The Knights of Labor of Lansingburgh have issued a circular requesting citizens to boycott the Chinese laundry recently established in that village.
“State News.” Rome Daily Sentinel. December 15, 1885: 2 col 2.

Another Chinaman has come to town, to work for Mon Chong.
“Notes About Town.” Lansingburgh Courier. November 20, 1886: 3 col 2.

A Chinaman in the dress of his native country and wearing a long queue attracted attention on First street Thursday. A crowd of boys began to annoy him with snowballs, and the Celestial was having a hard time of it when officer Green went to his rescue. The man said: “Me comee allee way Slan Flancisco and lookee for washee housee Ah Lee. Blad bloys here.” He finally said he was to go to Lansingburgh, and the policeman escorted him to a car. “Me no likee Tloy,” he said, as he boarded the car.
Troy Daily Times. March 26, 1887: 2 col 5.

The “drop-a-cent-in-the-slot” concerns, which furnish for this small amount a shock of electricity from a galvanic battery, have in one way or another furnished considerable amusement since they were introduced. A shock such as these batteries will give is difficult to withstand, even by a man who knows what to expect, but when the partaker is perfectly innocent of what is going to happen, the effect is astonishingly increased. An incident of the latter kind happened in Lansingburgh a few days ago, when two Chinese laundrymen of that village, who knew, probably by unpleasant experience, the nature of the galvanic battery, brought a third Celestial, one of their comrades, as a victim, to the sacrificial altar, i.e., the drug-store across the way. Under the guidance and direction of his cicerones, the victim grasped the handles of the machine, and as the necessary penny rattled down the slot he pulled and pulled hard, receiving the extreme current. The blood-curdling shriek of the deluded Chinaman is described by the bystanders as simply horrible. It was followed by another and another, the unhappy laundryman being on the verge of a fit, but his companions merely shouted with laughter and made no attempt to release their victim. The more humane Americans hastened to push back the handle and stop the display of torture.
“Wayside Whispers.” Troy Daily Times. January 4, 1890: 5 col 3.

(An example of an electric shock machine; some were intended to have some therapeutic effect, others were prank devices that didn’t advertise the electric shock the user would receive. The latter variety enjoyed some popularity roughly during the 1870s to 1890s, by which point some of the victims were winning lawsuits for the actual harm the machines could do. See e.g. Woodyard, Chris. “The Shocking History of Electric Practical Jokes.” Haunted Ohio. http://hauntedohiobooks.com/news/the-shocking-history-of-electric-practical-jokes/ )

The Chinese New Year.
The colony of Chinese laundrymen at Lansingburgh to-day began the celebration of the commencement of the new year, according to the Chinese calendar. The festivities will continue three days.
Troy Daily Times. January 20, 1890: 3 col 5.

The Albany Express of Monday contained an article saying that a number of Chinamen residing in Troy were in the habit of going to Albany and gambling on Sundays. Several of the Mongolians living in Lansingburgh were questioned concerning their trips to Albany. They at first said they went to attend a meeting of a society of their countrymen. In the course of their talk it was learned that they indulged in some game of chance, and that their place of rendezvous was on State street, Albany. They denied that gambling was the purpose of their visits.
“Lansingburgh.” Troy Daily Times. July 26, 1890: 3 col 4.

—Wing Sing, an experienced laundryman from Cohoes, has opened a Chinese laundry at No. 628 Second avenue, this village, and invites all who want first-class work done at low prices to give him a call.
Lansingburgh Courier. October 9, 1890: 3 col 2. 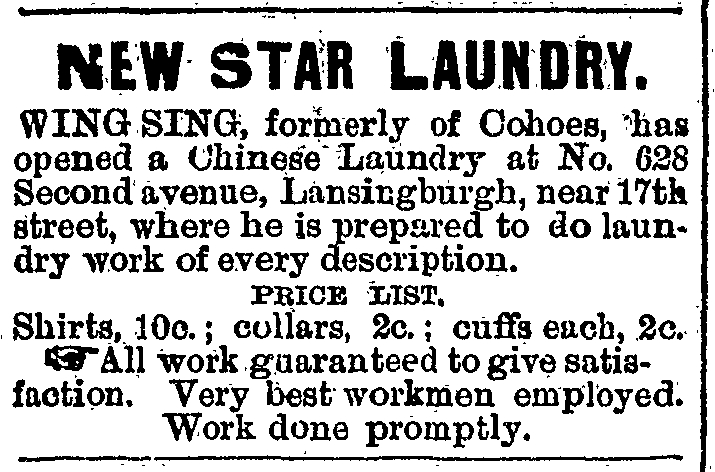 Wing Sing might have died the following year. A man named Sam Sing died in 1892; while the name doesn’t match, Wing Sing could have taken a nickname. The location “opposite the Phoenix Hotel” doesn’t match 628 2nd Ave near 117th Street, as 628 2nd Ave would correspond to the southern part of the building last occupied by Trader Eds Nautical Pub and Restaurant that burned in 2011 and has been empty (but still standing) since, which is on the same side of the road as the Phoenix Hotel (now the Lansing Inn, 596 2nd Ave) and about a block north of it. Perhaps the Troy Times got some of the details wrong?

Monday was the Chinese Holi-Moonday, and the Celestials in the ‘Burgh celebrated the event by a ban­quet in which turtle soup played an im­portant part.
“Local News and Seasonable Jottings.” Lansingburgh Courier. June 25, 1891: 3 col 1.

The Board of Health met Tuesday evening and ordered a number of nuis­ances abated. Another meeting was held on Tuesday evening when several more nuisances were ordered abated, among the number being one in the rear of the Chinese laundry and one on Fifth ave­nue. The conclusion was reached that the bad odor arising from the cesspool at Fifth avenue and Nineteenth street was caused by failure to properly flush the sewer.
“Local News and Seasonable Jottings.” Lansingburgh Courier. October 01, 1891: 3 col 2.

—The Chinese laundrymen in the ‘Burgh observed their Christmas day on Tuesday. They gave presents to each other and enjoyed an extra dinner. The next holiday they observe will be their New Year day, January 28.
“Local News and Seasonable Jottings.” Lansingburgh Courier. December 24, 1891: 3 col 2.

Opium and Pneumonia Cause Death—A Chinese Laundryman.
The proprietor of a Chinese laundry on Second avenue, opposite the Phoenix hotel, Lansingburgh, was found dead in bed about 8 o’clock last Thursday. The man’s name was Sam Sing. He was about thirty-six years old and had been in Lansingburgh only a few weeks, having come from New York. He had been in the country about a year. Last Thursday an employe of the laundry attempted to enter, and found the door locked. Entrance was forced, and the proprietor was found dead. Undertaker Wall took charge, and at the direction of Coroner Collins Drs. Magee and Lyons conducted an autopsy, disclosing death to have been the result of pneumonia. The physicians think that the man had been ill for some days, although he had been at work, and that to allay the pain of the disease he may have taken opium, which hastened death. The remains will be sent to China by friends of the dead man living in Albany.
Coroner Collins held an inquest Tuesday evening at Wall’s undertaking rooms.
Troy Times. May 19, 1892: 1 col 7.

Someone by the same name, reversed, was operating a laundry in Troy over fifty years later. It may or may not have been the same man, as Wing Sing seems to have been not an uncommon name for Chinese immigrants in the United States. Nobody by the name of Wing Sing, or Sing Wing, seems to have been enumerated in any state or federal census in Lansingburgh or Troy anytime between 1880 and 1940, for whatever reason. Most of the 1890 US Census burned; the 1892 NY Census for Rensselaer County is not known to be extant. The 1900 US Census, the last to include Lansingburgh as a municipality distinct from Troy, had six Chinese immigrants working in the laundry industry: Chu Sing, Chu Foor, Chu Jim, Chu Foor, Chu Sing, and Chu Doun all at 656 2nd Ave. Coincidentally, 117 years later, there’s a laundry around that location, the Clean N Bright Laundromat at 654 2nd Ave.

A recent act requires that all Chinamen shall present their photographs to government officials employed to take a census of the Celestials. Although Chinese authorities think this is a violation of the international treaty there will be no indignation meeting in Troy. The Chinese photograph-gallery will contain no picture from this city, as there is no native of China among the 65,000 inhabitants. It is a strange fact, and one that can hardly be said of any other American city of the size of Troy. Lansingburgh, West Troy and Albany include Chinamen, but Troy is regarded as unremunerative, having better facilities for doing the work that most Chinamen in the East depend upon.
Troy Daily Times. August 13, 1892: 3 col 5.

—Deputy collector of internal revenue Van Alstyne, of this district, says the Lansingburgh Chinamen have not regis­tered and been photographed as required by law. May 5 is their last day of grace.
“Local News and Seasonable Jottings.” Lansingburgh Courier. March 30, 1893: 3 col 2.

—William Rochester has received a silver badge bearing several Chinese characters, which translated mean “God bless you. May you live a hundred years.” The badge was the gift of Hine Ken, whose husband brought it recently from China. Mrs. Ken is a daughter of the late Charles Wood of Lansingburgh and her husband now conducts a school for the education of Chinese to Christianity at Metuchen, N. J.
“Lansingburgh.” Troy Times. October 24, 1896: 4 col 4. 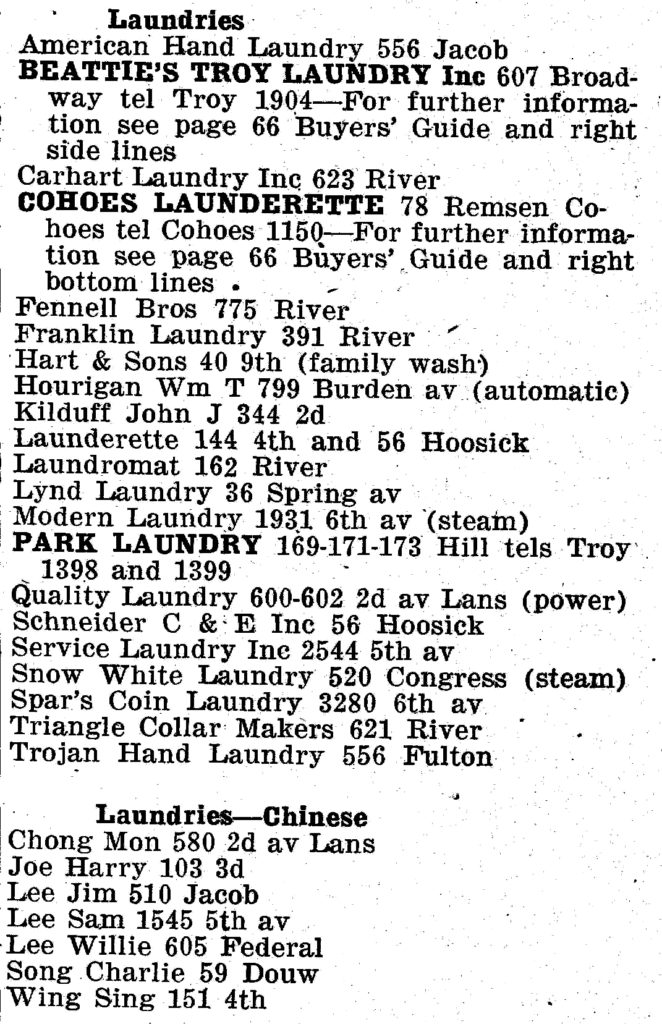