—Professor Manuel, widely known as one of the most successful teachers of dancing that has ever appeared in Troy or its vicinity, will commence a class at the American House, Lansingburgh, this afternoon. There will be many at the ‘Burgh who will take advantage of the present opportunity to become well acquainted with the very latest and most popular dances of the season. The Professor is certain to have as large a class as he can very well attend to.
“Homespun.” Troy Daily Whig. January 18, 1872: 3 col 2. 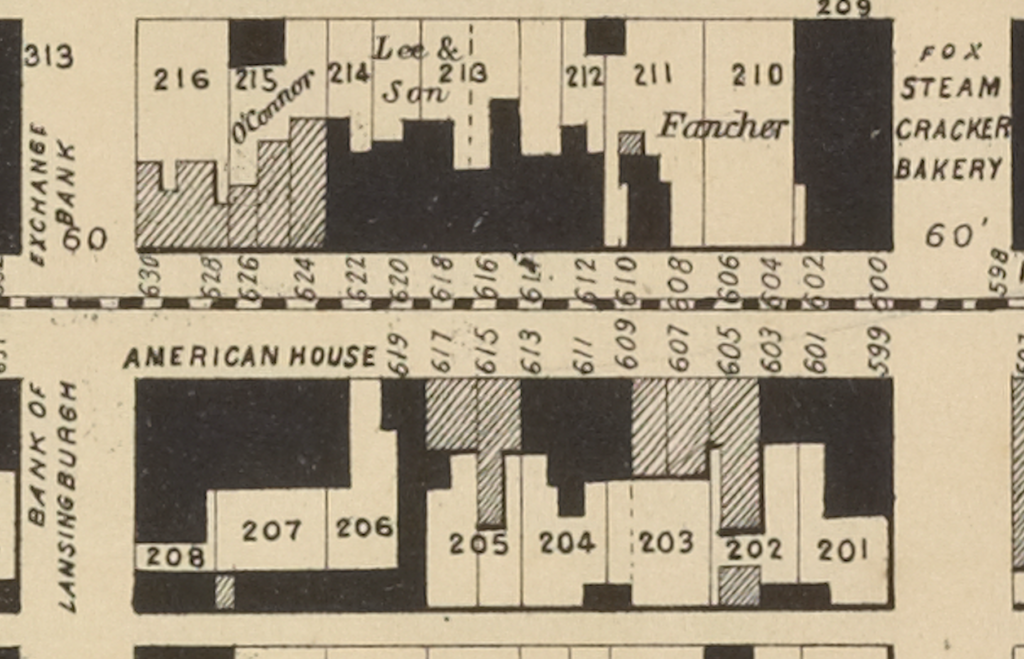 AT A LANSINGBURGH LANDMARK.
—
Fire Visits Old American House—Children Rescued by Patrolman—Occupants and [?]—Origin of Fire Unknown.
The old American House at [One Hundred] Seventeenth Street and Second Avenue, one of the oldest buildings in Lansingburgh, was damaged by a fire that broke out at 10 o’clock Tuesday night in the rear of the apartments of Coleman Nisoff of 627-629 Second Avenue. Two alarms were sounded from box 24 by Chief Wiks. A second fire broke out in the Nisoff apartments just before 2 o’clock this morning, and Sergeant Lovelock turned in another alarm from box 24. The dmage as estimated this morning was $3,500, partly covered by insurance.

Three Children Rescued.
Patrolmen Nolan and Schultze rescued three of Mr. Nisoff’s children from the first fire. The children, whose ages range from six to twelve years, were inthe burning building and were making frantic efforts to escape. Patrolmen Nolan and Schultz, however, had to go into the building to rescue them, and, although the little ones were not burned, they were badly frightened.

Nearly All Have Insurance.
The first fire was discovered by a passerby, and Captain O’Brien turned in the alarm. Nisoff himself located the second fire in the walls of the building between his house and the old American House. Nisoff conducts a tailor shop on the first floor and lives with his family on the second floor. R. S. Townsend occupies the third floor. The old American House is occupied on the first floor by George Dial and on the second by Mrs. Jennie Hopkins. Frank Malo, who conducted a shoe repairing shop in the Nisoff building, did not have any insurance. The other occupants carried some insurance. Mrs. Frank Smith of Middleburgh Street is the owner of the American House.

Could Not Explain Cause.
Mr. Nisoff said in the morning that he was in Troy when the first fire started and could not assign any cause for the blaze, for when he left home everything was all right at the house.

A Landmark.
The building is one of the landmarks of Lansingburgh and for many years was conducted as a hotel. In that capacity it was last known as the American House, but years ago in its palmy days it was the Clinton Hotel. The structure has probably stood on the site more than three-quarters of a century. In the early days of the village and down to a period dating back about forty years it was the rendezvous of the farmers of the surrounding country. In the rear of the hotel there were then large sheds and barns, and it was no unusual sight to see them crowded with all sorts of vehicles from the farms, the owners of which were scattered about the village. At meal hours they gathered in the hotel, a picturesque assemblage, such as is not seen nowadays, except perhaps at a country fair, and “swapped” stories and sometimes horses and wagons, and had a general good time. The hotel was noted for the excellence of its table, and the landlords necessarily had to provide hearty food in abundance to satisfy the appetites of their patrons. The hotel office was on the ground floor at the northeast corner and in the rear of that was the bar-room. Still further west, extending to the great gateway leading to the yard was the long dining room. The rooms on the second floor extended the length of the building southward on either side of a spacious hall. On the third floor was a big ballroom that was for years the frequent scene of balls, hops, private dances and parties and other festive functions. The Clinton House ballroom was the most commodious in this section then, one of the most popular and in almost constant demand. Many of the older residents will doubtless recall Babcock’s Orchestra that was usually engaged to provide music for the dancing. It was composed of the father, Henry Babcock, and three sons, George, Sidney and Edward Babcock. The old Clinton House was for years the home of the Masonic fraternity in Lansingburgh.

An Old Lodge Room.
The lodge room was on the third floor and still remains as it was when the last convocation was held in the room, except that it is dilapidated and sadly suffering for want of care. The ceiling is in the form of a dome and painted to resemble the firmament. Masonic emblems and figures are numerous and the apartment, even as it appears to-day, is impressive in its decorations. There Hiram Lodge, one of the first in this vicinity to receive a charter, met for a long time. Some of the merchants who occupied stores on the ground floor were Alonzo Aldrich, crockery dealer; Hiram J. Caswell, tinsmith and stove dealer, and Henry Babcock, shoe dealer. Next to the office for many years was a barber shop occupied at different times by James Baltimore and James Frost, the latter a noted checker player. It is about thirty years ago that the hotel became known as the American House. Among the proprietors recalled are Like Reed, Alexander Smith and Capt. Frank Teson. It is about a quarter of a century since the building was conducted as a hotel.
Troy Times. May 18, 1918: 5 col 3. Semi-Weekly Edition.