The Bijou Theatre was dedicated to exhibiting motion pictures for longer than any other theater in Lansingburgh. In 1971 it was one of the last two in the entire City of Troy, the only other being the Cinema Art in downtown Troy which only showed adult films at that point.

Portion of a painting of the Bijou Theatre and northeast corner of Fifth Avenue and 112th Street. Donated to Lansingburgh Historical Society by Ken and Jane Graham.

—The excavations for the foundation of the new motion-picture theatre at [One Hundred] Twelfth Street and Fifth Avenue were started to-day. F. N. Barhydt will conduct the enterprise.
“Lansingburgh.” Troy Times. September 9, 1912: 2 col 4.

A Novel Method.
A novel method of concrete construction is being tried by the mason building the foundation for the new motion-picture theatre at Twelfth Street and Fifth Avenue. The foundation below the surface will be built without forms. This is done by digging a trench to the required depth, filling with large cobblestones and allowing a very soft mixture of cement to settle in the interstices. The work will be completed in another week, and the carpenters will then start the building.
“Lansingburgh.” Troy Times. September 13, 1912: 6 col 2.

—The new Twelfth Street motion-picture theatre is being built at a rapid rate. The entire frame work and a portion of the interior boarding have already been placed. The construction is of a novel kind, no lath or planer being used. There will be boards on both sides of the studding, with building paper between.
“Lansingburgh.” Troy Times. October 2, 1912: 6 cols 2-3.

Here and There.
—The new Twelfth Street Theatre will be ready early in November.
“Lansingburgh.” Troy Times. October 7, 1912: 6 col 2.

—Fifteen men were this morning remodeling the new Twelfth Street motion-picture theatre. The opening performance will be given Saturday night. The theatre will be called the Bijou.
“Lansingburgh.” Troy Times. October 30, 1912: 6 col 4.

Paint and Coats.
A row was caused in front of the new Bijou Theatre at Twelfth Street Saturday by the fresh paint near the box office. Patrons’ clothing came in contact with it. The proprietor offered to settle for all damages, and the damaged clothing was taken to a nearby cleaner.
“Lansingburgh.” Troy Times. November 6, 1912: 6 col 2.
Enlarging Theatre.
The moving picture business has been found to be as profitable in Lansingburgh as in other places—so much so that William F. Wilson, owner of the Bijou Theatre at the corner of Twelfth Street and Fifth Avenue, has decided to enlarge his theatre. It is planned to enlarge his theatre. It is planned to lengthen the building thirty-five feet, which will greatly increase the seating capacity of the playhouse. The work will probably be commenced next week. Frank Barhydt is the proprietor.
“Lansingburgh.” Troy Times. August 14, 1914: 7 col 3.

—Workmen started to tear down the barn in the rear of Wilson’s Hotel at Fifth Avenue and Twelfth Street this morning preparatory to enlarging the Bijou Motion-Picture Theatre, the seating capacity of which will be greatly increased.
“Lansingburgh; General Mention.” Troy Times. August 18, 1914: 9 col 2.

—The frame work for the addition to the Bijou Theatre at Twelfth Street and Fifth Avenue is in place, and it is expected the roof will be finished in a couple of days. It will not be necessary to close the theatre while the repairs are being made. The addition will probably be ready for use by the end of next week.
“Lansingburgh; General Mention.” Troy Times. September 3, 1914: 9 col 1. 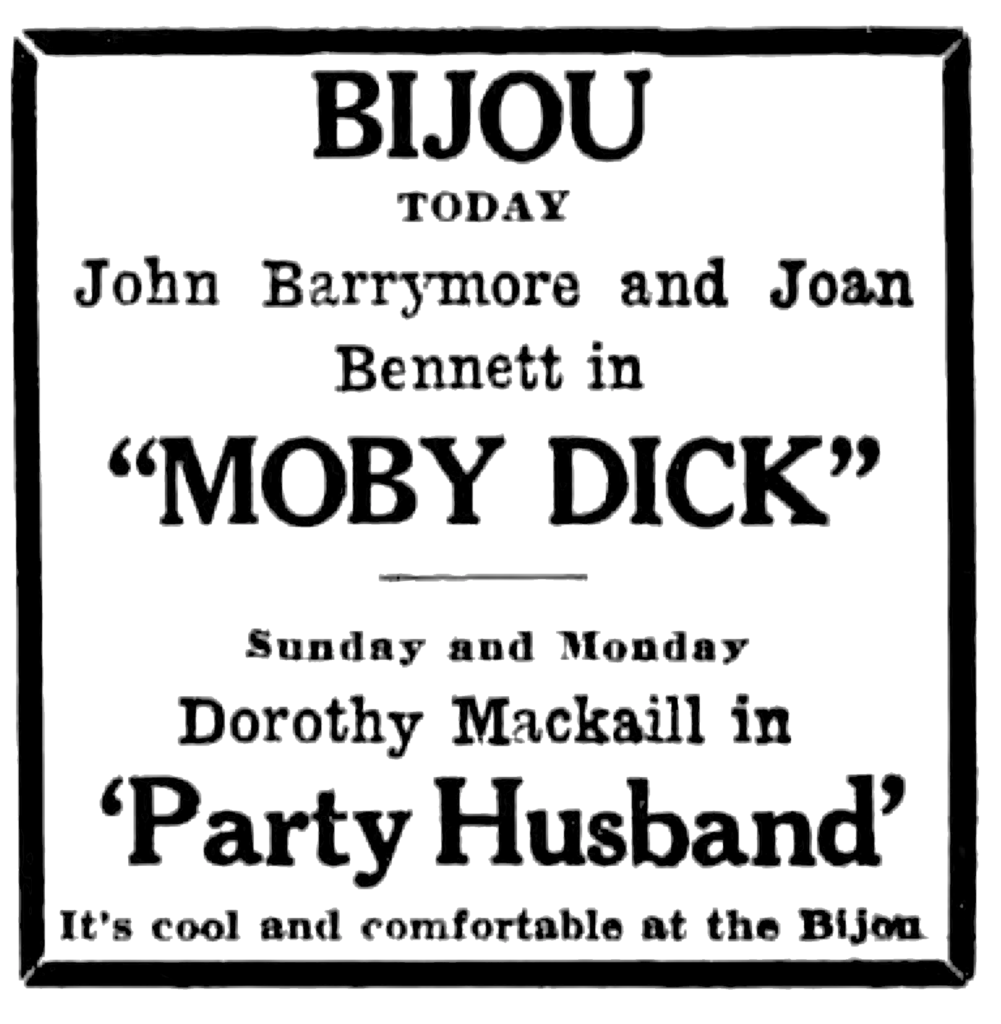 NOVEL INVENTION.
—
New Lighting Scheme Being Constructed At Bijou Theatre At 112th Street and Fifth Avenue.
James Wilson, manager of the Bijou Theatre at 112th Street and Fifth Avenue is constructing a novel invention on the theatre front. For several weeks, persons passing the theatre have been wondering what the construction was going to be. More than 200 calls have been received at the theatre by curious persons. Some thought it was a new cooling system, others an organ and many thought it was a new sign system.
When completed, the entire top of the front will be lighted indirectly in several different colors. A projector will be placed on the canopy and will flash the light on the top of the front with the colors changing every few seconds. Underneath will be a large “Bijou” sign. Mr. Wilson also plans to renovate the interior of the theatre in the near future.
Troy Times. May 19, 1933: 3 col 2.
New Bijou Theater to Have Grand Reopening Here Tomorrow Night
The new Bijou Theater on which construction was started in May on the site of the old frame theater building at 112th Street and Fifth Avenue has been completed and the grand opening will be staged to-morrow evening.
The structure is entirely fireproof and is equipped with the latest developments in theater building accessories.
One of the principle features of the building is the air conditioning system which provides filtered, cleansed air, cool in summer and automatically controlled at the proper temperature in winter. The air is distributed through the auditorium through a core of outlets in the ceiling that have the appearance of lighting fixtures. The air, cool in summer or warm in winter, comes down from ceiling and goes out as used air through grills in the specially constructed double flooring of the building.

Seats 650 Persons.
The auditorium seats 650 people, the seats being of plush and leather in a red color scheme. Lighting is by modernistic tubular shaped lighting fixtures on the sidewalls and by indirect lighting from the ceiling, the ceiling having the shell-like appearance of the ceiling of Radio City Music Hall in New York.
The entire building is finished in acoustic material so as to give perfect reproduction in the sound system.
In the end standard of each row of seats are lights that are subdued during the show and bright during intermissions for safety in the aisles.
The exterior of the building is finished in tapestry brick is varying shades from straw to light brown.

104 Feet Long.
The auditorium runs north and south and is 104 feet long, 56 feet wide. The lobbies run east and west, the outer lobby being 18 by 28 feet and the inner lobby, 18 by 26 feet. A modern store adjoins the lobby.
All seating is in the orchestra or main floor but a balcony in the rear houses the projection room and the women’s lounge. The men’s rest room is on the first floor.

Numerous Exits Provided.
The modernistic theme of the theater is also expressed in the entrance and marquee which is replete with stainless steel, glass blocks and other modern accessories.
As its main sign the word Bijou in large letters is silhouetted against a background of lighted glass blocks.
The inner lobby and aisles are deeply cushioned with thick piled rugs.
Numerous exits are provided from all parts of the auditorium.
The new building including both the auditorium, lobbies and the store adjacent to the outer lobby is nearly four times as large as the old frame theater building which occupied part of the site and was one of the pioneer picture houses of the city.

Lobbies Very Large.
The two lobbies alone occupy all the space which was covered by the old structure. Demolition of the latter was started May 8 and as soon as this was completed the new building was started immediately. The present structure is entirely new, everything from the foundation up being newly constructed.
The stage of the auditorium is 9 by 19 feet deep and is beautified with luxurious drapes and curtains.
The new theater will continue under the same management, the Wilson brothers.
Times Record. August 29, 1938: 11 cols 1-4. 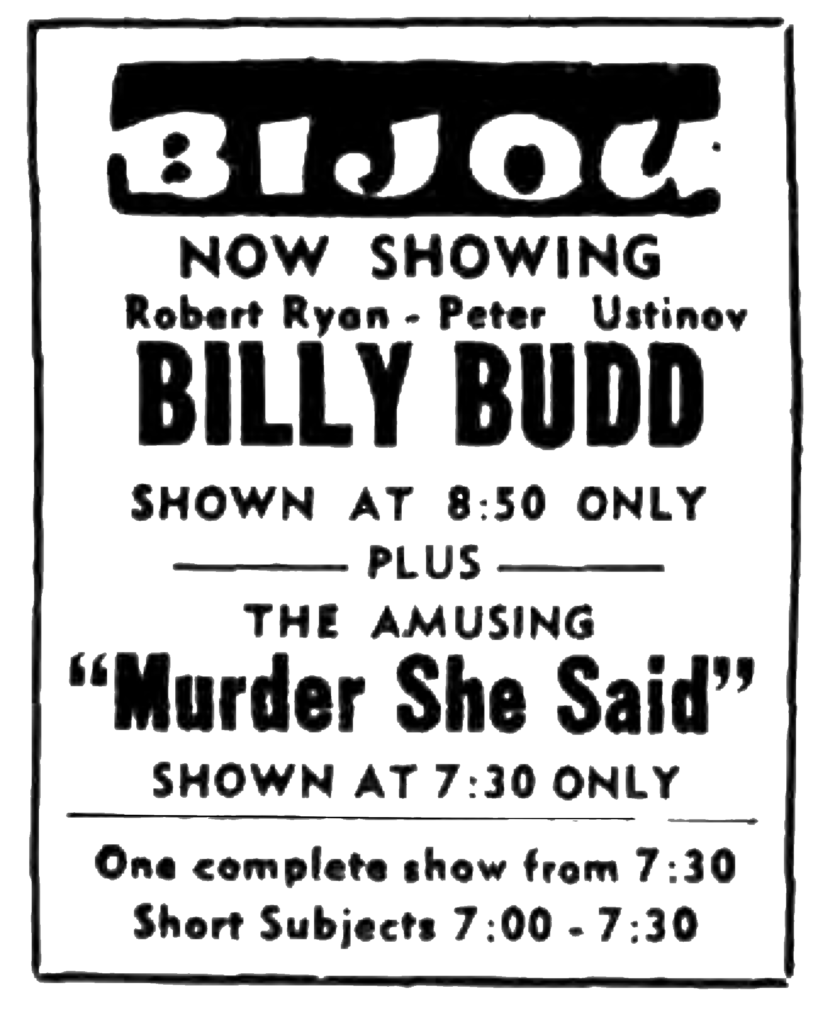 Last Big Movie Theater Closing
By ED MAXWELL
Troy, once known as a “theater-going town” is losing another of its once-fine motion picture houses. Proctor’s Theater at 82 4th St., will be shuttered after tonight, perhaps forever. […]
The Griswold Theater, with a seating capacity of 1,500, was opened in 1871 on the site of two previously fire-destroyed theaters. It opened in October of that year with “The Lady of Lyons.” Woolworths store is on the site of the old Griswold.
Other theaters included the Lincoln in Third Street opposite the fire-razed old city hall; the American, in River Street; Palace, in Fifth Avenue at Hoosick Street; the Rose; the King; the Lansing; Gardner Hall; the Monroe; Bijou, now the Oxford, in Lansingburgh; the Arlington, in Albia, which was located next to the Hope Steamer House.
Now, only the Oxford and Cinema Art Theater, formerly the American, remain on the Troy scene.
Times Record. August 31, 1971: 15 cols 7-8.
Oxford Reopens; No ‘X’ Policy
The Oxford Theatre, Fifth Avenue and 112th Street, which ceased operations Monday, will reopen tonight with a no “X” policy under a Wilhelm Booking Agency contract.
John Gardner of Speigletown Road, owner of the theater for the past eight years, said Tuesday a lease with Country-Wide Theaters was canceled and he had decided to run the theater himself.
He also said that rumors about a bank being built on the theater site were not unfounded. “The possibility still exists,” he noted, “but films will be shown on daily basis until something is worked out one way or another.”
Times Record. May 2, 1973: 17 cols 4-5.

DEMOLISHED — A pile of rubbish is all that remains of the Oxford Theater (formerly the Bijou) at the corner of 112th Street and Fifth Avenue in Lansingburgh. The brick structure was constructed in the 1930s by the Wilson family of Lansingburgh, replacing the old wooden Bijou Theater. The Countrywide Theaters, Inc. purchased the theater a few years ago and changed the name to the Oxford Theater. Wilson’s Liquor Store, adjoining the theater at 472 5th Ave. also was razed. A new State Bank of Albany branch will be built on the site.
Times Record. September 7, 1973: 13 cols 3-5.