—H. Clay Bascom has purchased of Mrs. Louisa A. Bonesteel the Bonesteel residence on Second avenue, Lansingburgh, for $6,700. The purchaser will occupy the property as a residence.
Troy Daily Times. March 24, 1886: 3 col 2. 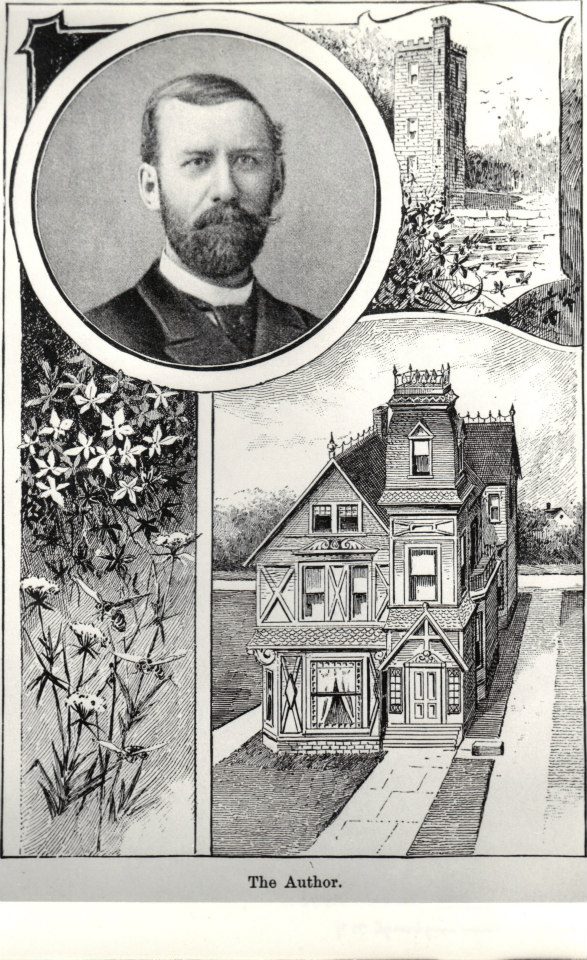 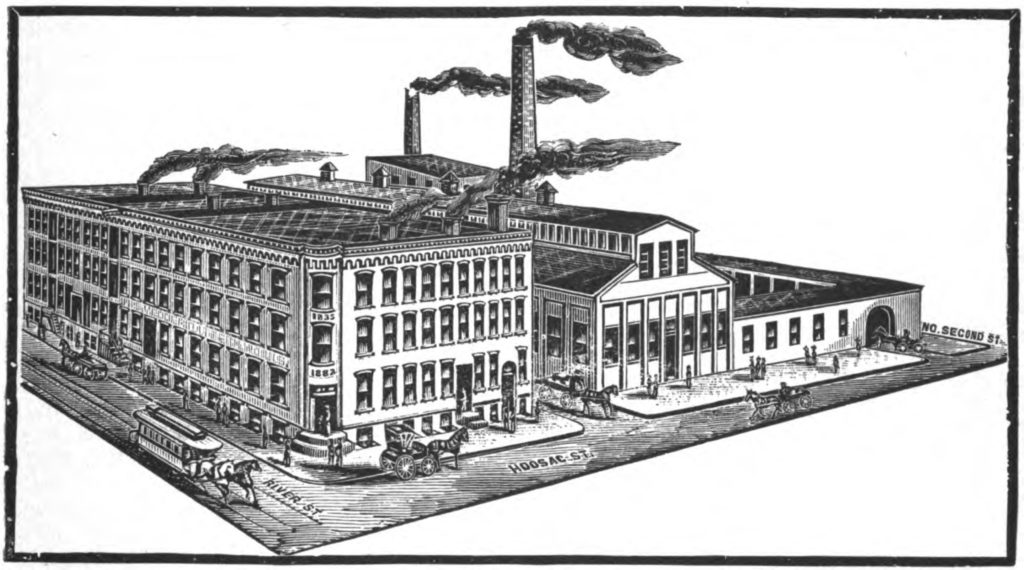 Obituary.
The remains of H. Clay Bascom, who died at Ocala, Fla., arrived at his late home, 150 Second avenue, Lansingburgh, last evening. The funeral will occur at 2 o’clock to-morrow afternoon from the late residence. The remains were accompanied to Lansingburgh by Mrs. Bascom, Rev. Lewis K. Moore of Brooklyn and Robert Galbraith, a former partner of the deceased. Rev. Mr. Moore is pastor of a Methodist Church in Brooklyn. He was formerly employed in Mr. Bascom’s works and was sent to the ministry of the deceased. Mr. Moore will officiate at the funeral to-morrow. The members of the Troy Woman’s Christian Temperance Union will assemble at the residence of Mrs. J. H. White of 146 Second avenue, Lansingburgh, at 1:30 p.m. and will attend the funeral in a body. The union will present a floral wreath. Members of the County Women’s Christian Temperance Union will be present at the funeral. Prominent Prohibitionists from Troy and vicinity will act as pall-bearers, and the carriers will be employes from Mr. Bascom’s works.
Troy Daily Times. December 16, 1896: 3 col 2.
PARK MEMORIAL FOUNTAIN.
—
Mrs. Ellen F. Bascom’s Gift to the City in Memory of Her Husband, H. Clay Bascom—To Be Placed in Prospect Park—Description and Location of Fountain.
A fountain in memory of H. Clay Bascom, for many years a prominent business man of this city, will be erected soon in Prospect Park. it is the gift of his widow, Mrs. Ellen F. Bascom, and will be a fitting memorial to the life of one whose labors in the cause of temperance made him known not only throughout this state, but also in many other parts of the United States. Mayor Mann has received a letter from Mrs. Bascom presenting the fountain to the city, and that letter will be presented to-morrow at a meeting of the Board of Contract and Supply.

The Donor’s Letter.
The letter follows:
Troy, N. Y., Sept. 13, 1907.
Hon. Elias P. Mann, Mayor of the City of Troy:
Dear Sir—Through you, as chief magistrate, I wish to tender hereby to the city of Troy a memorial to the late H. Clay Bascom to take the form of a drinking fountain for man and beast to be erected in Prospect Park, where I trust its pure and cooling waters may symbolize the principles which were so dear to the one whose memory it will commemorate.
Respectfully yours,
ELLEN F. BASCOM.

Location of Fountain.
The location selection for the fountain is just south of the Warren mansion on the west side of Prospect Avenue, the main drive in the park, near its intersection with Sylvan Avenue. It is in a sightly place where practically all that visit the park will pass, and it is visible from all points of the main plateau. It will be in the midst of noble trees and its artistic lines will add much to the appearance of Troy’s beautiful park.

Drinking Facilities.
The fountain will be of cast iron, fifteen feet and three inches in height, with a base four feet and seven inches square. There will be a horse trough, three feet and nine inches by two feet and three inches and eleven inches deep. The facilities for persons to drink include two faucets, one on each side, the flow of water controlled by self-closing valves operated by pressing metal buttons. Troughs for dogs are filled by the overflow from the faucets. There will be a patent water cooling apparatus underground in the rear of the fountain, through which drinking water will pass in a system of coils and reservoirs encased in ice.

Description of Fountain.
The shaft is square in section, tapering in graceful lines to the top, with side brackets for electric lights. On the front will be the words: “H. Clay Bascom Memorial Fountain, Presented to the City of Troy by Ellen F. Bascom, 1907.” The draped figure of Hebe from the original statue of the artist Thorwaldsen will surmount the ornamental capital. The figure will be five feet in height and will stand in a graceful attitude, with a vessel of water extended in one hand and the other hand holding a pitcher at her side. Pictures of the fountain, its location and the man in whose memory it will be erected will appear in the Saturday Art Section of The Troy Times. It is expected that the fountain will be placed in position this fall.
Troy Times. September 12, 1907: 5 col 2. 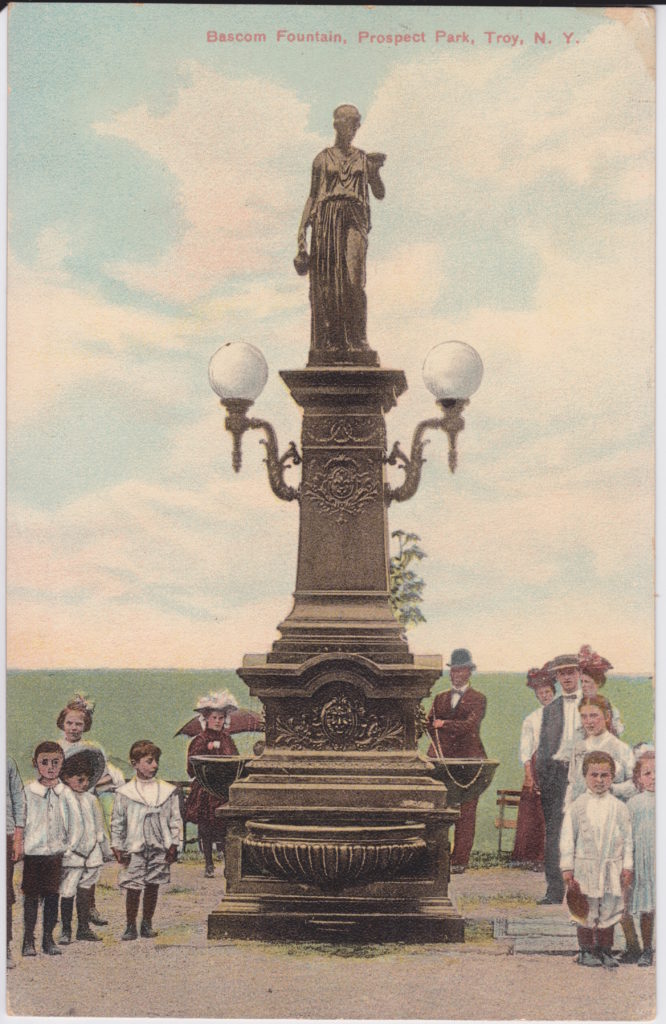 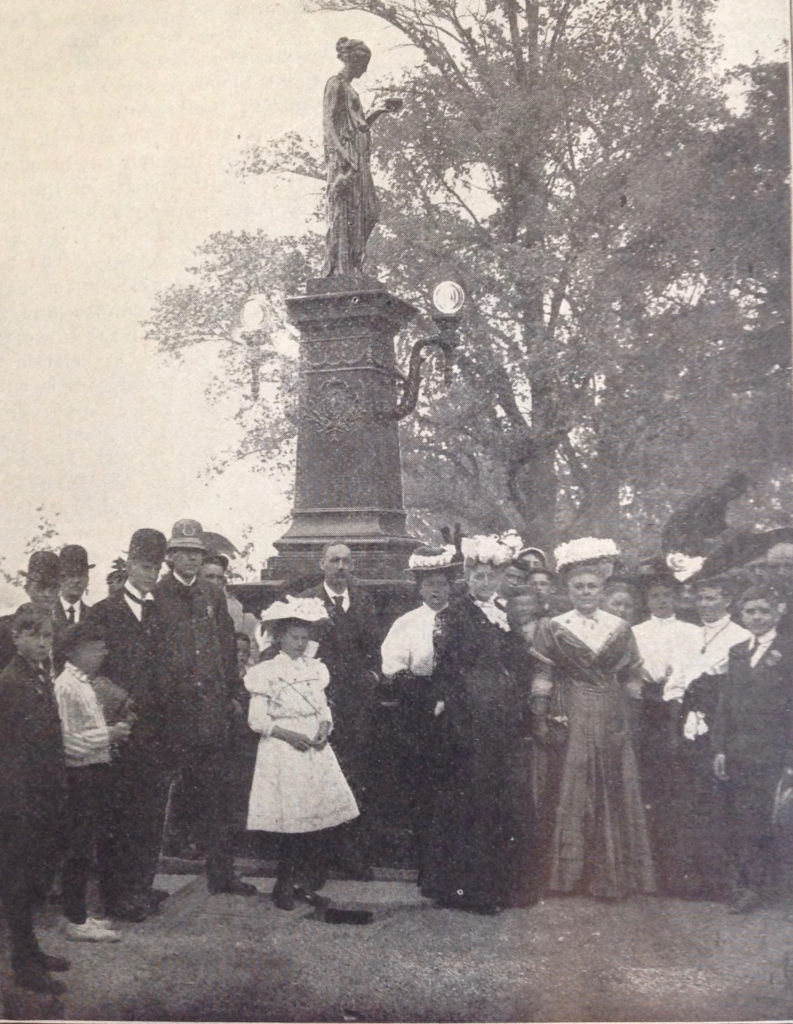 Photo by Boice.
UNVEILING OF H. CLAY BASCOM MEMORIAL FOUNTAIN.
The fountain presented to the city by Mrs. H. Clay Bascom as a memorial to her husband is prominently located in Prospect Park on Prospect Avenue, the main driveway, near its intersection with Sylvan Avenue, and just south of the Warren museum. The fountain, built of cast iron, is fifteen feet three inches in height and artistic in design. The tapering shaft is mounted by a draped figure of Hebe from the original statue by Thorwaldsen. Upon the side of the shaft facing the avenue is the inscription: “H. Clay Bascom Memorial Fountain, presented to the City of Troy by Ellen F. Bascom, 1908.” The fountain is provided with drinking troughs for men, horses and dogs, the water being cooled by an underground coil incased in an ice receptacle. The picture here presented was photographed during the unveiling exercises, May 22. Among those who participated in the exercises there are shown in the picture following: Carl Bascom (the boy standing at the extreme right of the picture with his head uncovered), a grandnephew of the late H. Clay Bascom, who performed the act of unveiling the monument; behind him, Chester Bascom, a brother of the late H. Clay Bascom; at his right, Mrs. Charles Ressigue and Miss Laura Bascom, nieces of H. Clay Bascom; Mrs. Sarah A. Kenney, who presented the fountain in behalf of the donor; Mrs. H. Clay Bascom, who gave the fountain to the city; Mrs. George Bascom, George Bascom (standing in front of the fountain) and their little daughter, Miss Helen Bascom.

Editor The Record: The other day, while driving through the country with a middle-aged couple of acquaintances, the conversation reverted to Prospect Park. The lady remarked that some of the happiest days of their courtship were spent in the park.
In these days it was a beautiful spot. The flowers, the trees, the lawns, the views and oftentimes the music would lend its charm to our enjoyment. But today every official element of beauty has been destroyed or removed. The Warren mansion, that unique structure (which could easily have been restored with WPA funds) was torn down at the whim of an iconoclast; the Vail mansion burned by vandals; the Bascom fountain, donated to the park by the generosity of Mrs. Bascom, dismantled and removed; the band stand eliminated; the paths neglected and overgrown with grass. Not a comfort station in all the broad area.
Is the civic pride of Trojans so deadened that no murmur of regret is heard at this willful neglect?
Let us, however, take heart and hope that the incoming administration will restore these neglected areas to their pristine beauty, and curb the vandalism by strict police supervision so that respectable citizens can again enjoy in peace the comfort their rightful heritage.
GARNET D. BALTIMORE
Troy, Nov. 16, 1943.
Baltimore, Garnet D. “Pulse of the People: Alas Poor Yorick!” Times Record [Troy, NY]. November 22, 1943: 12. [Bold emphasis added.]

A similar fountain had been in Frederick, Maryland – the Diehl Fountain. The statue was oriented differently on the pedestal and it lacked the light globes, but otherwise was practically identical.