Notice.
MR. J. S. WILBUR, of Sandy Hill, N. Y. [Hudson Falls, Washington County], will from this date act as superintendent of our factory. His twenty-five years’ experience and our superior facilities will enable us not only to maintain, but excel, the elegant work which he has for so long a time produced. All the styles which he has been making will be continued by us. The business will hereafter be conducted under the name of “The Troy Carriage Works,” at 914 River st., Troy (formerly Chamberlin’s).
WM. F. BIDWELL & CO.
Troy Daily Times. October 13, 1883: 3 col 7.
Sleighs.
CUTTERS and two-seated, latest Brewster styles, elegant in design, our own make. We have a novel device for attaching our Torsion spring, making them unequaled in comfort and pleasure to the occupants. CHAMBERLIN’S OLD STAND,
Troy Carriage Works.
Troy Daily Times. December 31, 1883: 3 col 5.
James K. P. Pine’s Enterprise—A Boon to Lansingburgh.
Mr. James K. P. Pine has purchased from the Judson estate the five lots lying at the southeast corner of State and Clinton streets [Second Avenue and 121st Street]. Consideration $4,000. On his new purchase Mr. Pine will erect at once a mammoth brick structure to be used as a shirt, collar and cuff manufactory and laundry [still standing in 2017!]. The industry will give employment to about 300 operatives. It is his intention to lay a pipe to the river for the purpose of procuring a supply of water from that source. And if the village does not build a sewer to the river, as it doubtless will, Mr. Pine will construct one himself for the purpose of drainage. He has also purchased the river lot at the southeast corner of Clinton and River streets [121st Street and 1st Avenue], which he will occupy at an early day in the prosecution of his business. He will build a dock in front of this lot in connection with a village dock that is to be constructed at the foot of Clinton street. The Troy carriage works will also be removed to State and Clinton streets as soon as the necessary accommodation is completed. These industries will prove a precious boon to Lansingburgh and the village will display good judgment in extending all the accommodations possible. A few manufacturers with the enterprise and push of Mr. Pine would speedily change our humdrum town into one of the liveliest villages in the state. Therefore we say again, to our authorities, render every manufacturer that comes all the aid and encouragement possible.
Lansingburgh Courier. February 23, 1884: 3 col 3.
Toboggans.
FIRST-CLASS TOBOGGANS in stock and made to order. Best material and workmanship. Neat, stylish and very fast.
Cushions for same to order.
Troy Carriage Works, New Factory, corner State and Clinton streets, Lansingburgh.
JOHN S. WILBER, Superintendent.
Troy Daily Times. February 17, 1885: 3 col 5.

—Thomas McGrevey has resigned his position at the Troy carriage works to engage in business for himself.
Lansingburgh Courier. April 20, 1889: 3 col 2.

—A sulky and surrey built at the Troy carriage works, were shipped to New Zealand Monday.
Lansingburgh Courier. August 13, 1891: 3 col 2.

—Jack Kenoh, who is believed to be the person who stole a waterproof covering from one of the Troy Carriage Co’s vehicles while en route to Whitehall over the D. & D. road, was arrested in Chicago last week and is now lodged in jail at Whitehall awaiting trial.
Lansingburgh Courier. October 8, 1891: 3 col 2.

—Nines from the Lion factory and the Troy carriage works had a friendly contest last Saturday afternoon. The [baseball] game was played on the grounds on Second avenue near [One Hundred] Twenty-sixth street, and resulted in a score of 9 to 3 in favor of the Lion nine.
Lansingburgh Courier. July 21, 1892: 3 col 2.

The Carriage to Match the Platform.
Garret A. Hobart, the nominee of the Republican party for Vice President, recently purchased a carriage of the Troy Carriage Works. Yesterday President J. K. P. Pine wrote to Mr. Hobart, asking him to return the carriage and have the silver trimmings, with which the carriage was first decorated, changed to gold.
Troy Daily Times. June 20, 1896: 3 col 2. [Hobart was William McKinley’s Vice President from 1897-1899, dying in office.] 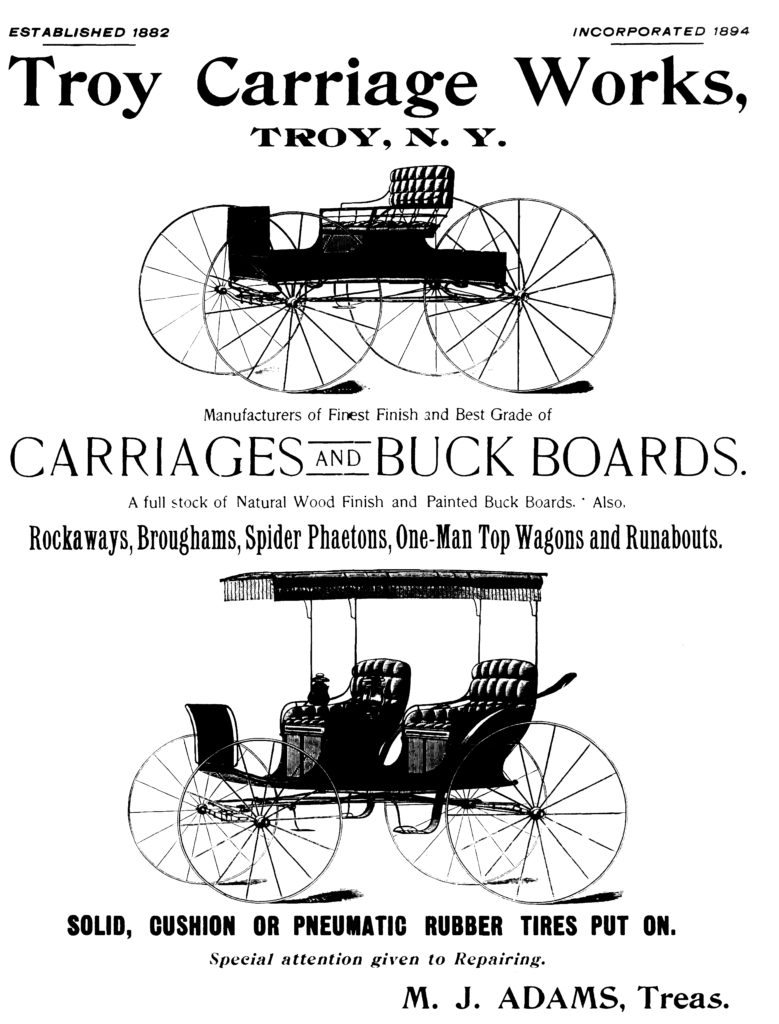 Troy Carriage Works.
The Troy Carriage Works is a concern that is doing an immense business. The splendid sleighing that is being enjoyed in this section of the state now has caused an unusual demand for sleighs, thus augmenting the already extensive trade of the firm. During the past few years the business of the Troy Carriage Works has increased so much that the management has ceased to advertise in Troy papers alone, but have extended their advertisements in all the cities hereabouts and their ad is a familiar feature of the newspapers. With the selling of their output they give entire satisfaction, and nothing short or merit could and such favor with the public. It would pay anyone to make a visit to the Troy Carriage Works. Maybe you will find there just what would be most acceptable in a friend of yours who maintains a stable. Or if you are contemplating making yourself a Christmas present of a sleigh or carriage, just call at the Troy Carriage Works and inspect their stock.
Albany Evening Journal. December 15, 1903: 9 col 3.

POPULAR CARRIAGES.
That Troy carriages are in high favor, not merely at home, but also abroad, is evidenced by the fact that the Troy Carriage Works has recently sent to George S. Batcheller, Judge of the International Court of Appeals at Alexandra, Egypt, a four-passenger, glass quarter rockaway, and to James F. Tracey, Justice of the Supreme Court at Manila, P. I. [Philippine Islands], a four-passenger depot carriage.
Daily Saratogian. October 21, 1905: 7 col 2.

Mr. M. F. Jones left Monday for the Cambridge Fair, where he will be the representative of the Troy Carriage Works, sole agents for the Wayne automobiles.
“Troy Notes.” New York Age. September 6, 1907: 7 col 5. 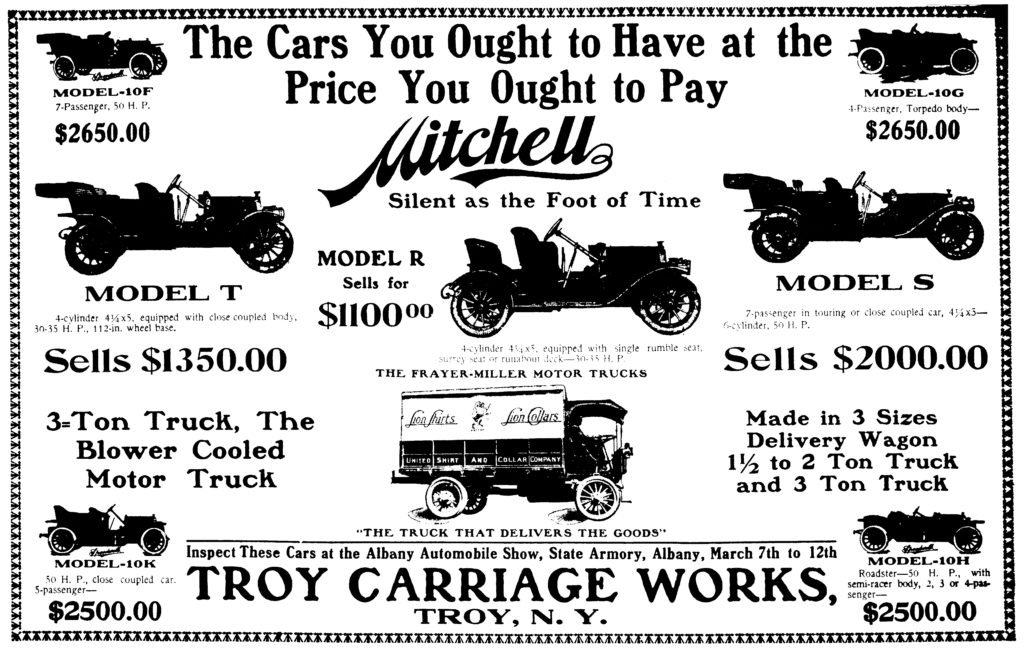 “The Cars You Ought to Have at the Price You Ought to Pay.” Troy Carriage Works advertisement. Troy Times. March 5, 1910: 7. (Scan by Fultonhistory.com; digitally cleaned up some by LHS) 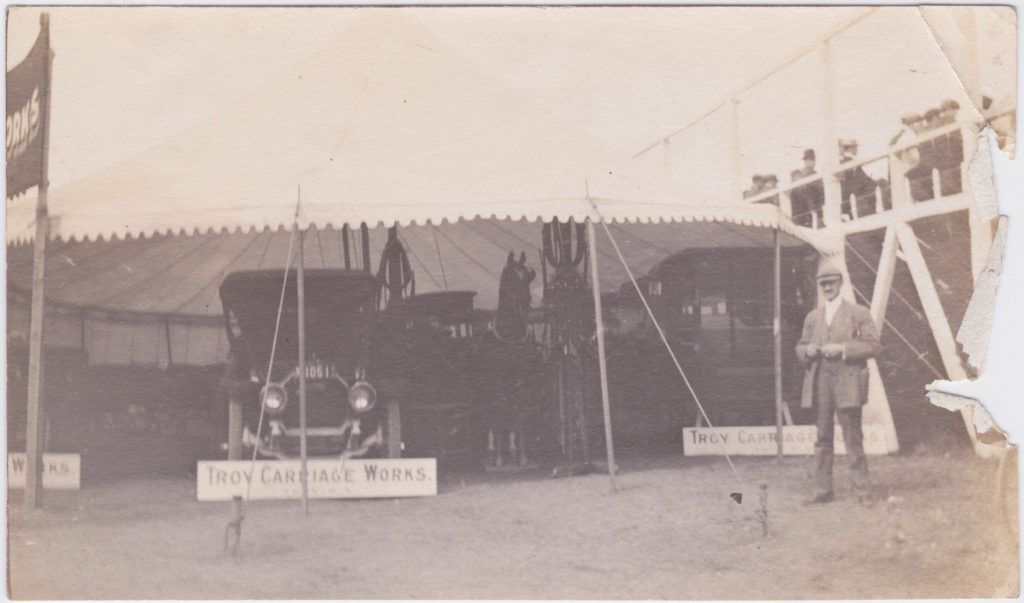 Undated photograph (1911 or later?) of Troy Carriage Works display under tent behind bleachers

VALUE OF THE EXHIBITS.
—
Cars on Exhibition at the Armory Worth Quarter of a Million Dollars—Society Night to be Observed This Evening—News of the Dealers.
One of the remarkable features of the Troy Automobile Show at the State Armory that few people stop to think about is the value of the cars on exhibit. An estimated inventory of the cars place the value at a quarter of a million of dollars, while the accessories on display in the basement are worth $50,000, making it a $300,000 show. […]

The Only Electric at the Show.
One of the cars at the show and the only one of its kind that attracts attention, especially from the women, is the Rauch and Lang electric in booth twenty of the Troy Carriage Works. It is the only electric car on exhibition at the show and thus has this field to itself. Most of the women who get inside to look it over refer to it as a “beauty.” Its appointments are all that one could desire in an automobile and it is a car especially adapted to the use of women for shopping. It is of easy control and may be operated from either front or rear seats. One of the claims made for the car is its low cost of operation. It is said it can travel fifty-five to sixty-five miles a day with one charge and that the average cost of electricity for a month is only about $2.40. Another attraction in this booth is the Krit light delivery. It has many features that appeal to the business man requiring a car for medium weight loads. The Troy Carriage Works also occupies booth twenty-three with a fine exhibit of Case cars, principal among them being the twenty-five horse-power, which is fully equipped.
Troy Times. February 5, 1914: 12 col 2. 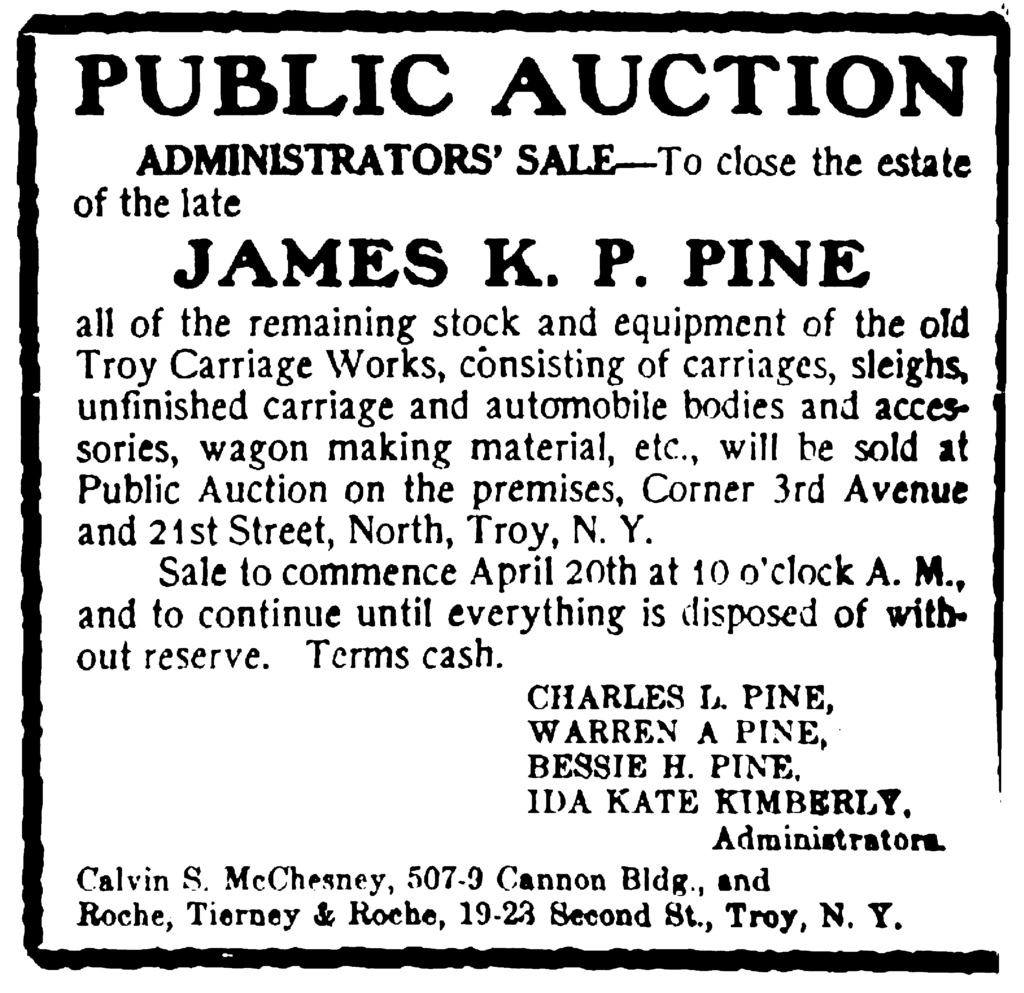 The April 2013 issue of the LHS Courier had an article by David Marsh about James Knox Polk Pine that touched upon the Troy Carriage Works.