The territory which now forms the north part of the town of Lansingburgh previous to the year 1819 belonged to the town of Schaghticoke. The site of the hamlet of Spiegletown, which is about two miles north of Lansingburgh, was in 1796 called the village of Dort. The village plat, as it was “laid out and constructed by a scale of 100 feet to an inch by F. Bancker, May, 1796,” on a piece of parchment, is still preserved. On it are marked three roads, which diverge from a common point, a little south of which was a building, the site of which is now occupied by the residence of James H. Rice. The road to the north is designated “St. Coick [North Hoosick] road;” the one leading eastwardly “Cooksburgh road,” and the one to the south “Lansingburgh road.” On the northeast part of the plat appears the name of John Follet; on the southeast that of William Douglas ; on the south that of Rattoon & Von der Spiegel ; on the southwest that of William Douglas, and on the northwest that of Charles Follet.
On another map appears the names of John Crab, Crab & Boos, Leonard Wager and Abraham Francisco, who were residents of the immediate vicinity at that time.
Weise, A. J. History of the Seventeen Towns of Rensselaer County. Troy, NY: J. M. Francis & Tucker, 1880. 39. 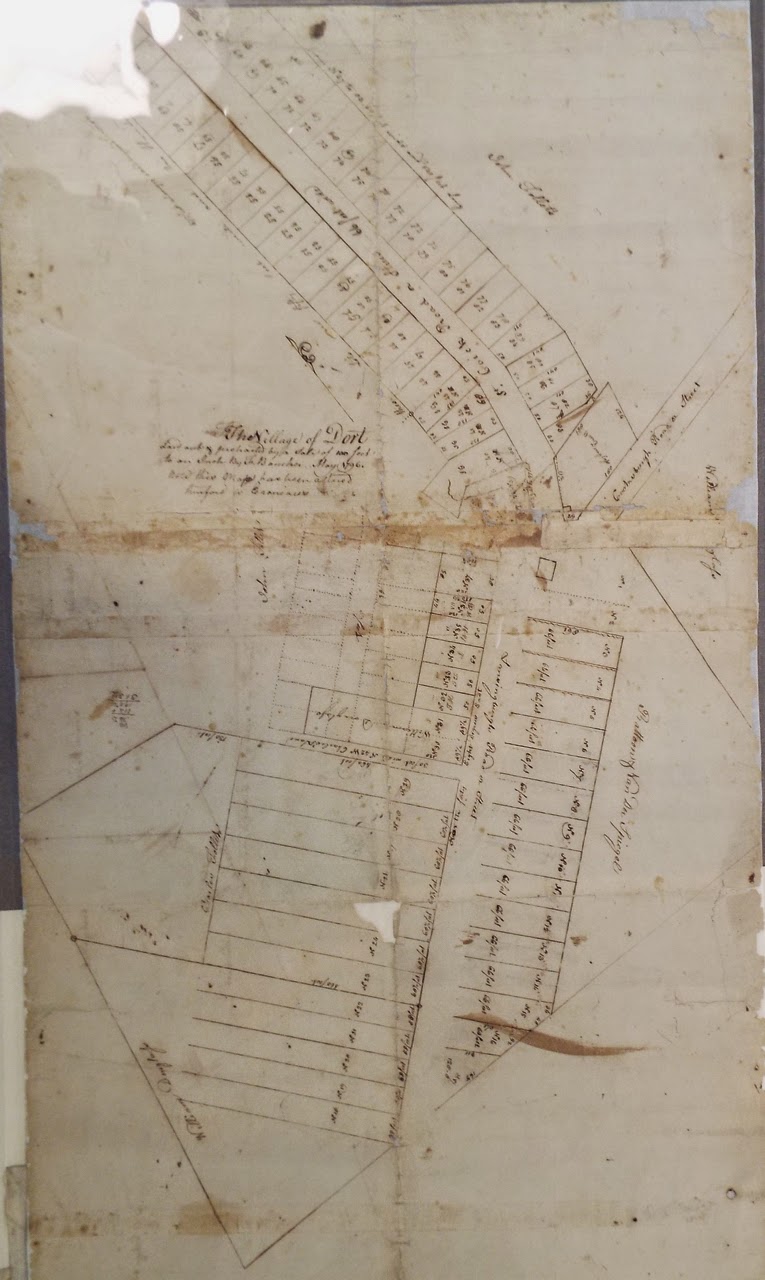 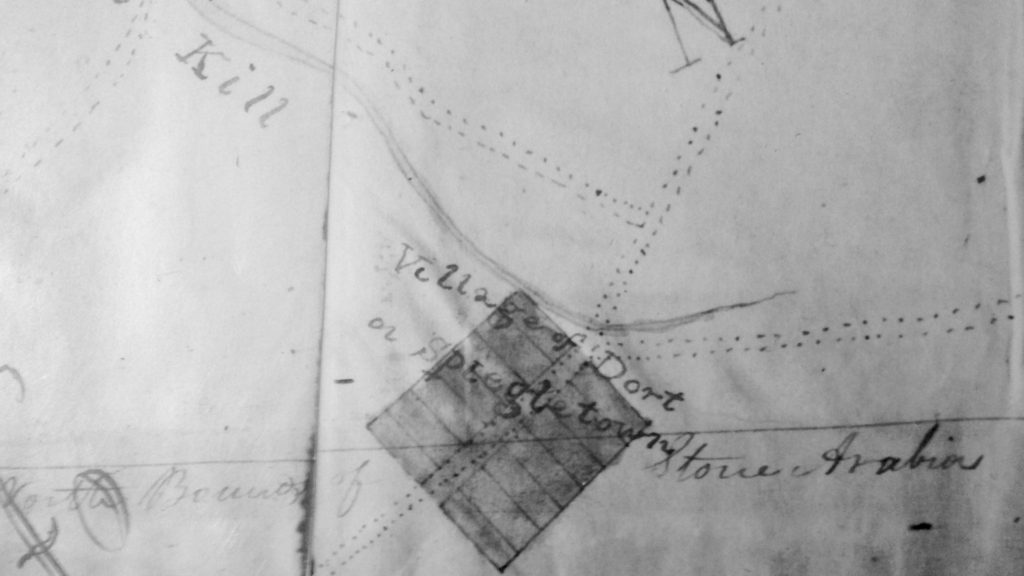 Detail from 1819 map of Town of Lansingburgh showing “Village of Dort or Spiegletown”. Roads shown include the Speigletown Road (New York State Route 40), Irish Road (north of the “Koola Kill”), Haughney Road (at left), and Fogarty Road (Rensselaer County Route 126). The northern line of the Patent of Stone Arabia seems to have been drawn too far south.

From the Baptist Register.
—
REVIVALS.
The reformation in Halfmoon has been already noticed, but not to the extent mentioned below: the celebration of the 4th at Speigletown, is a very gratifying addition to the few religious commemorations of the day.

—
An interesting extract of a letter from Elder John Peck, the agent of the Convention, to the Editor of the Register, dated
Hudson, July 8th, 1825.
“I then rode to Albany and called on Elder Leonard, and learnt that the brethren in this city had formed a missionary society to aid the convention. I then visited Troy, and preached on the Sabbath in the town of Halfmoon. Here the Lord is displaying the riches of his grace in the salvation of sinners. Some of different ages have been bowed to his mild sceptre, and between 60 and 70 have been added to the church by baptism. Elders Peck and Hubbel are labouring in this part of the vineyard of God, who have had their hearts comforted in witnessing the display of divine love to sinners. Likewise the church at the Burnt Hills under the pastoral care of Elder Whiting, about 30 have bowed their necks to the yoke of Christ and been buried with him by baptism, and added to the church. The most of them of the lovely youth. I then rode to Saratoga Springs and on June 29th, had an interview with the leading brethren of the Saratoga Association. On the 30th, I preached to the Association and notwithstanding on the same day they took up a collection separately for the Foreign and Domestick Mission, they contributed to me $35, in cash and they agreed to help in future.
“I visited a number of churches in this region, and received as much encouragement as could be expected.
“July 4th, I heard that some brethren had agreed to meet on this day that gave our country birth, in Speigletown. I thought it my duty to meet with them.—On my arrival the people were collected, but no roaring cannon saluted my ears, nor mirth or revelry. But on reaching the place, I heard the sweet accents of the gospel, which proclaims liberty to the captives and the opening of the prison to them, that are bound. Elder [Isaiah] Mattison of Shaftsbury, preached the first sermon, a young brother, by the name of [James] Covel the second, Elder [John] Harris of Nassau, the third, and I attempted the fourth. I then received of the assembly a contribution for the mission. This day has been one of the good days of my life. I believe it will be remembered by some of those present in eternity.
“Yours, in the bonds of a precious Saviour. JOHN PECK.”
Christian Watchman [Boston, MA]. July 29, 1825: 2 col 4.

SPEIGLETOWN
BUSINESS DIRECTORY.
—
I with Leander first will start,
And say with true and honest heart
That a good carpenter is he,
And does all his work ‘to a T!’
Next comes Dr. Calvin Morse,
Who knows all things about a horse,
And all the people plainly tell
He cuts their tails off very well.
Old Sheldon, he comes next in turn,
And of his business this I learn,
That he goes around and tried to keep
His pile of money into a heap.
A blacksmith lives o’er cross the way,
And works right well, the people say,
He does his jobs so very sleek,
That they pronounce them quite unique,
This man, whose works are free from blame,
Charles Shaver answers to his name.
Smith Freiot, he makes boots and shoes,
Though this, perhaps, is ‘pedlars news,’
Yet he himself doth ne’er work fast,
By rather this now seems his will
To workmen bossed by Simmons Bill.
Next house is widow Overracker’s,
Then that shell of Colonel Crocker‘s,
Which the passer-by now sees
Is filled up like a hive of bees,
For Bascom, Mills, and Foote live here,
And one John Chipman in the rear,
And also Williams stops here too,
Within this Railroad Rendezvous,
Lyman’s Office, too, is here
Though he boards at the tavern near.
But I must pass these Railroad men,
Though they’re ‘some pumpkins,’ all of them.
The next one here I’ll say, is that
Wherein resides one Rev. Pratt
Who guides the pilgrims of earth’s sod,
To nature and to nature’s God.
The Hotel, it is furnished nice,
And kept by James and Harris Rice,
Who by it do large profits reap,
So they make money quite a heap,
Bill Hoffman’s house is next I see,
A man, ‘some pumpkins’ too is he,
With handsome look, and knowing phiz,
The Lord knows what his business is.
Dan Freiot’s house comes next, I’ll tell,
And then old Barber in his shell,
A man, though needless, yet I’ll state,
That in sheep largely speculates,
And likewise largely deals in calves,
The profits he, with ‘Dolph,’ goes halves
John Filkins do he on travelers wait,
By lifting for them up the gate.
Bob Smith is next, he works for Morse
And leads to water his grey horse,
And follows him both up and down,
Just like his dogs through Speigletown,
And flies as quick for Morse’s call
As chiefs, when ‘foemen storm the wall,’
But here of all my rhyme the pith,
(All knows its true, who knows Bob Smith,)
That if by chance he lags or stops,
Morse, he feeds him well on ‘drops,’
Next house belongs to Webster Sam,
And he’s, they say, an honest man,
A farmer, and to all he’s kind,
And doth well his own business mind.
Then there’s old Aaron and his sons,
And he has some good looking ones,
Which live in bounds of ‘Uncle Sam,’
Yes, seven boys, including ‘Ham.’
A little on beyond this spot,
There lives a Mr. John M. Mott,
But now for research that could find
And fathom depths of human mind,
And, oh! my soul, think far and deep,
And spurn far from thee dreamy sleep,
To help me write without a blot,
The business one John M. Mott.
He does, they say, for all men feel,
And all their wounds he tries to heal,
And sighs for them when they would sigh,
And wipes the tears from off their eyes,
Then ’tis by all sir understood,
That John M. Mott is doing good
And if he ever falls in need,
I’ll help him on and say ‘God Speed.’

☞ SPEIGLETOWN REDIVIVUS.—We understand some enterprising parties in Troy have purchased the property upon which is located a fine mineral spring situate just East of Speigletown on the Cooksborough road. Their intention is to erect a commodious hotel, lay out extensive grounds, tube the spring, and transform a really delightful spot hitherto almost unknown into a Summer resort. This spring has long had a local reputation and is said to possess valuable medicinal virtues, but existing in an out-of-the-way place has never been brought into notice. Who knows the future of the old Dutch borough when this enterprise is carried out and the vulgar old patronymic Speigletown surrenders to the more euphonic but not less Teutonic Baden-Baden?
Troy Daily Times. August 1, 1870: col 3.

NOTES FROM OUT OF TOWN […]
JUNCTION. [Melrose]
A new organ has been purchased for the Methodist church in this place. A choir has been organized with Prof. Ransan as leader and Miss Mary E. Viall as organist.—The pulpit of the Lutheran church is vacant, Rev. Mr. Bolton’s term of service having expired.—Edward Strunk’s Park Hotel is already filled with boarders, many of them from Troy.—The mineral springs about half-way between this place and Cooksborough are being well visited this season. On Sundays the crowd is quite large.—Eugene Lee of Speigletown was quite badly cut one day last week by falling from a fence and breaking a jug he was carrying. One of the arteries of the wrist was severed by the broken pieces.—A man named Fogerty, in the employ of Harris Rice, was overcome with the heat one day last week, and lying down in the shade was not found by his friends till some time after.
Troy Daily Times. July 22, 1872: col 2. 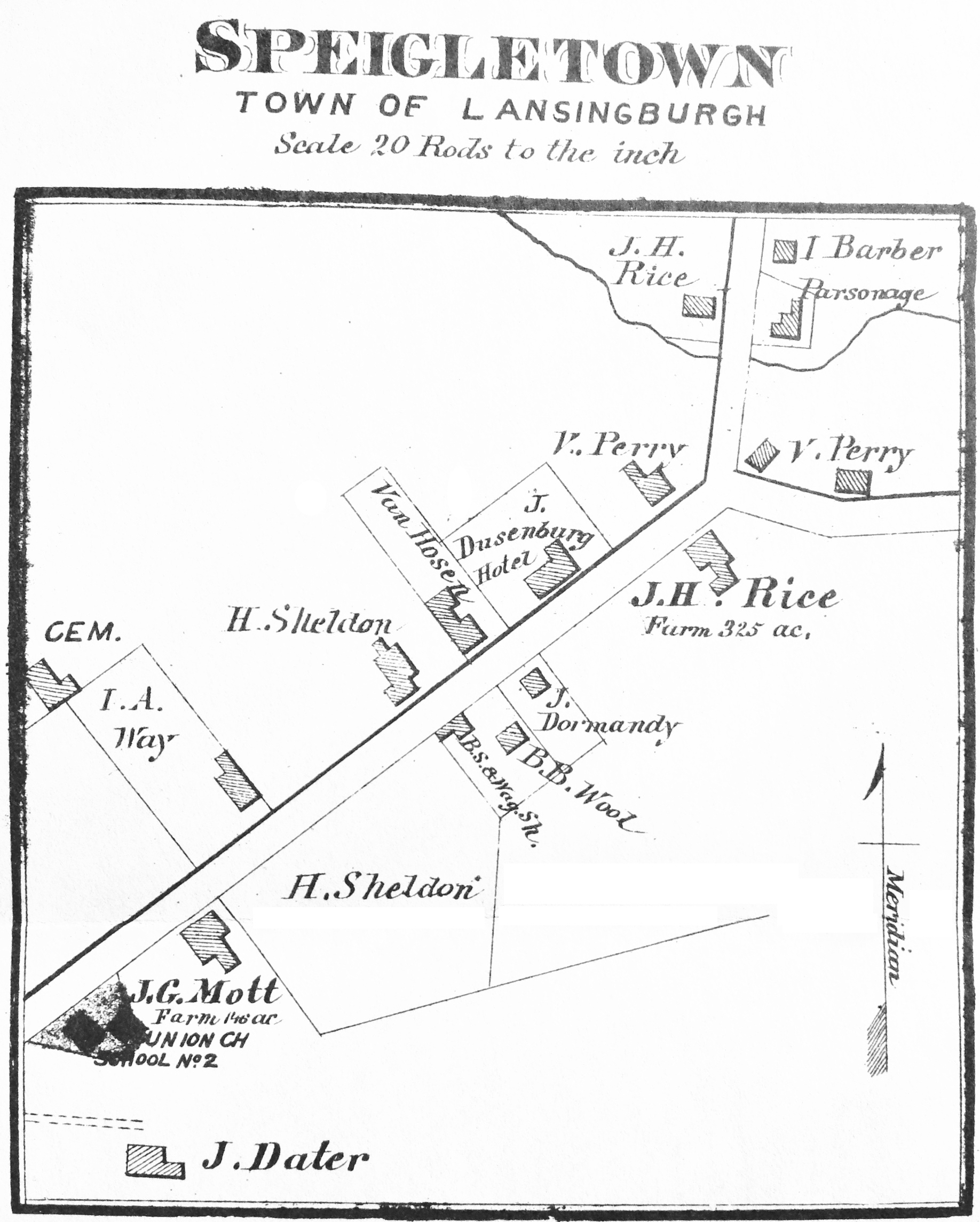 Last Saturday the Stars of Lansingburgh, defeated the Speigletown base ball club by a score of 23 to 4.
Lansingburgh Courier. May 8, 1886: 3 col 4.

This afternoon a game of base ball will be played at Speigletown between a nine of Theodore Ray’s sapbuck rangers and a nine composed of plow boys from Speigletown at great expense.
Lansingburgh Courier.June 19, 1886: 3 col 2.

—A large delegation of Democrats from this place went to Speigletown Saturday evening to participate in a demonstration at that place. A rousing meeting was held.
“Local Political Notes.” Lansingburgh Courier. November 4, 1892: 3 col 3.