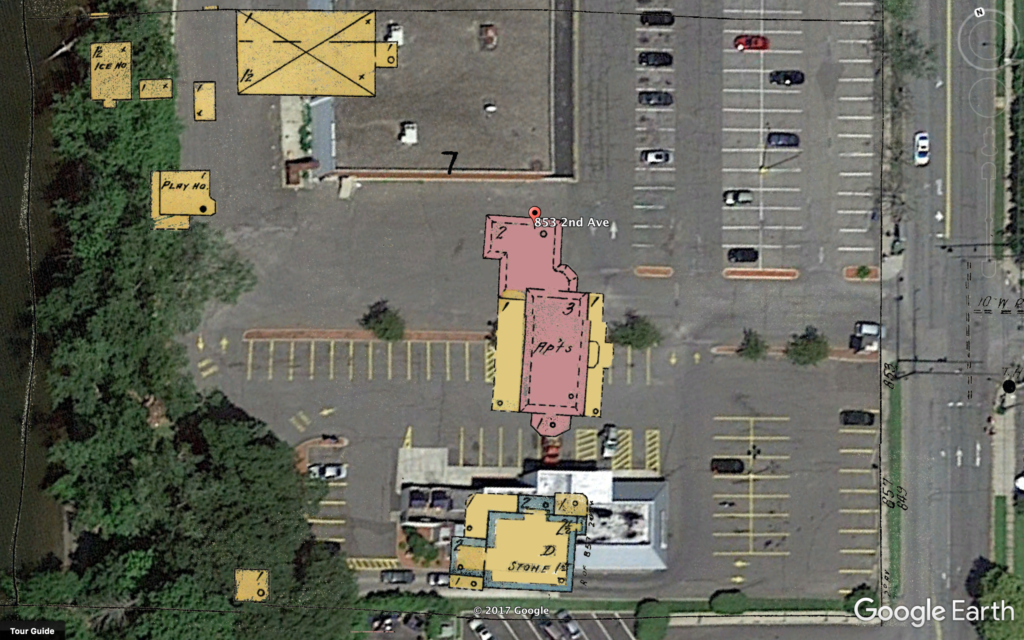 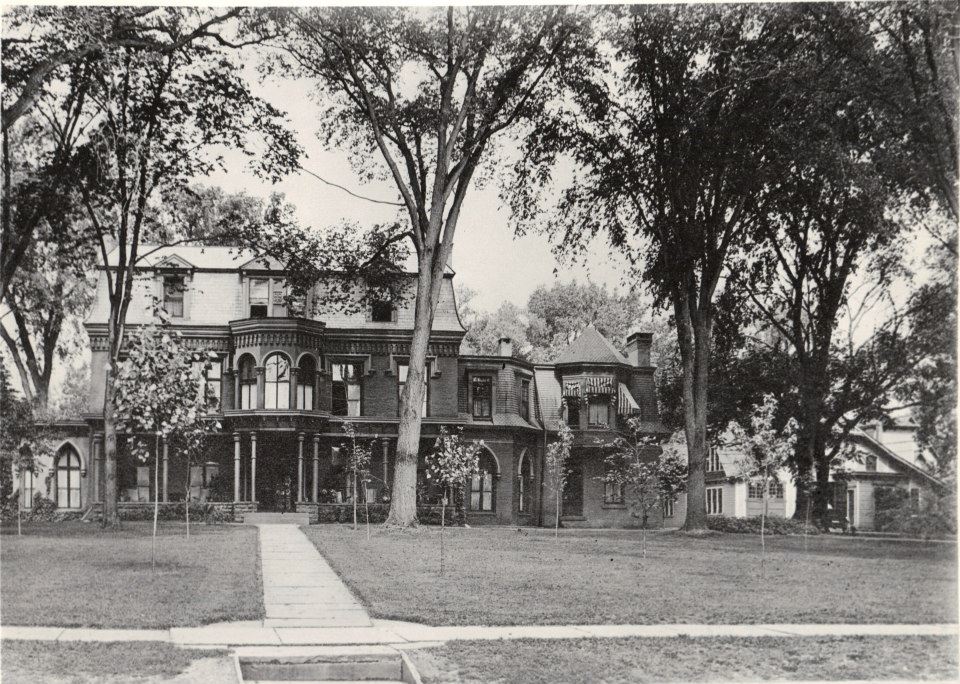 East side of the Abbey from Second Avenue facing west, carriage house at right (northwest of house). 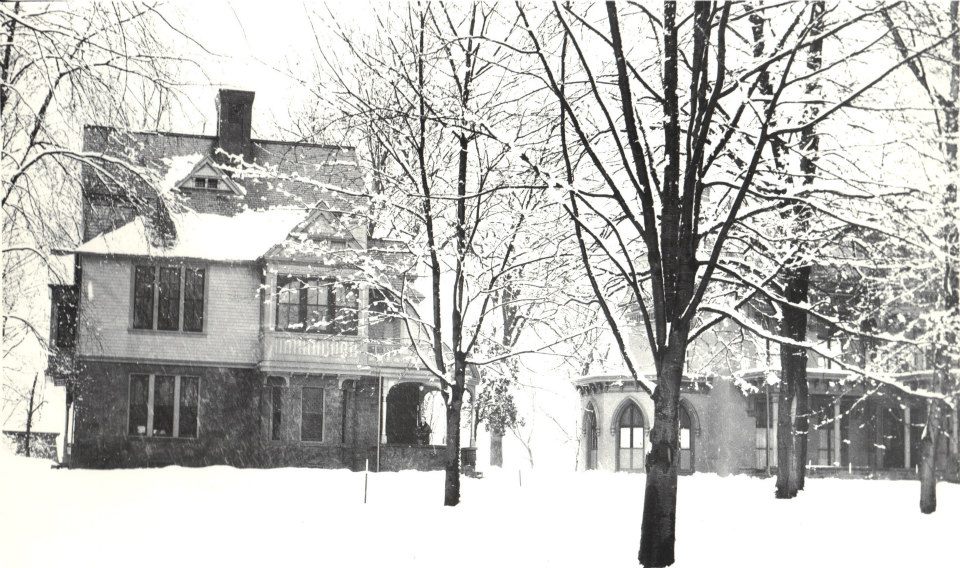 South end of The Abbey (853 Second Avenue) at right; 851 Second Ave at left, from Second Ave facing west toward the Hudson River. 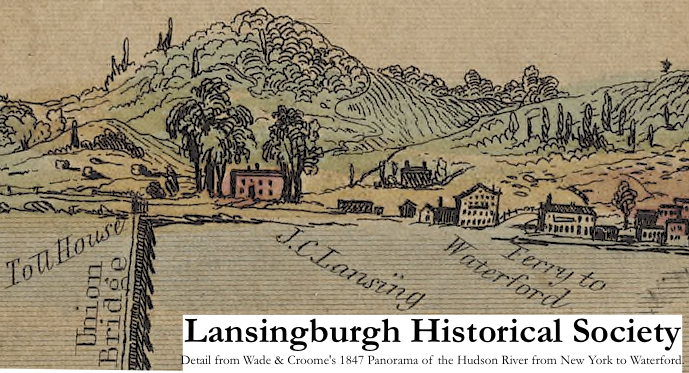 ☞ LANSINGBURGH.—[…] James Morrison has converted the Lansingburgh homestead near the Waterford bridge,—one of the original landmarks of the village, into a public house, calling it The Abbey. The Abbey is completely embedded in stately elms, is surrounded with pleasant walks, and commands the coolest breezes during the Summer.
Troy Daily Times. May 21, 1858: 3 col 3.

We understand that Morrissey has engaged quarters for himself and trainer, Mr. M. Shepard, at the Abbey, in this village, kept by Mr. James Morrison, and that he will go into active training on Monday next.
“Morrissey and the Benicia Boy.” Lansingburgh Democrat. July 22, 1858: 2 col 7.

FIRE.—An old barn connected with the Abbey Hotel was burnt down on Wednesday morning. The fire was the work of an incendiary. It was of little worth, except as a memento of the many contests Morrissey had with that bag, during his training exercises. The bag had been removed, and at the time of the fire the barn contained about 100 bushels of onions. The Washington boys of engine No. 4 soon got their machine to work, but too late to save the building. No insurance.
Lansingburgh Democrat. November 25, 1858: 2 col 7.

The “Abbey” of pugilistic notoriety, has undergone repairs and additions by its present owner, A. A. Peebles, and the ancient Lansingb homestead assumes an appearance of modern architecture.
“Lansingburgh.” Troy Daily Times. January 21, 1860: 1 col 7.

☞ REAL ESTATE.— […]
—The “Abbey” hotel at Lansingburgh, which was purchased some time ago by a Trojan for a private residence, is being completely remodeled. A bay window at the South side and a wing on the other end entirely alter the shape of the building. It promises to be one of the most beautiful Summer residences in this vicinity.
“Lansingburgh.” Troy Daily Times. October 24, 1863: 3 col 2.

☞ THE ABBEY.—The Lansingburgh Chronicle, in noticing improvements that are taking place in that village, thus alludes to the present proprietor of “The Abbey,” who is a young Trojan:
“James Van Schoonhoven, jr., has employed a skillful landscape gardener from New York, who is now engaged in laying out carriage drives and walks and ornamental beds for flowers in the beautiful Abbey premises. Under the tasteful supervision of that gentleman, we expect soon to see the Abbey converted into one of the finest residences on the Hudson.”
Troy Daily Times. May 24, 1865: 3 col 3. 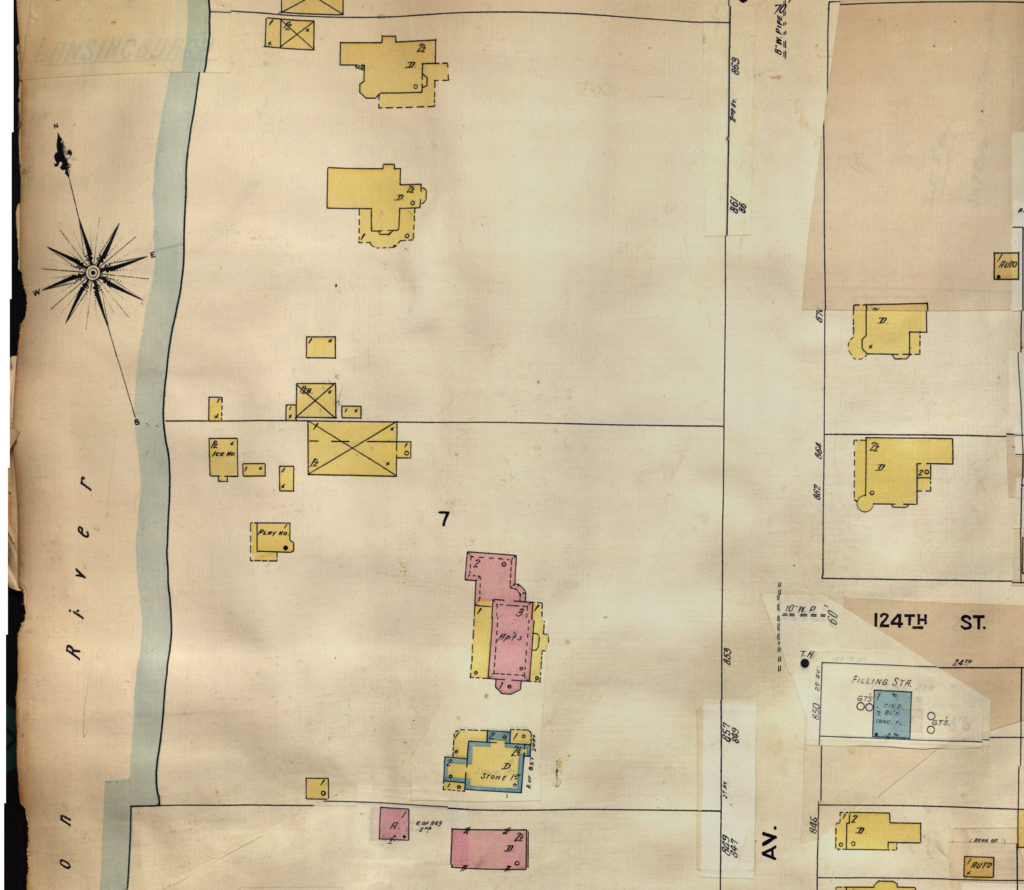 Was Once the Abbey.
The handsome and picturesque residence of James K. P. Pine, just south of the Waterford bridge, is counted among the oldest buildings of Lansingburgh. In the early part of the nineteenth century it was a hotel and clubhouse under the name of “The Abbey” and was widely known. It was at one time the residence of Cornelius Lansing. Originally the entrance faced toward the river. With its spacious grounds and beautiful old trees it is now one of the most beautiful homes in this section.
“Landmarks of the ‘Burgh.” Troy Times. May 30, 1914: 6 col 3.

AAA RATING
Home and investment. The former Pine residence, 853 Second Ave. Seven modern apartments, 7 baths, hardwood floors, central oil heat, 10 car garage. Landscaped grounds with beautiful trees, shrubs and river frontage. Property is adaptable to other uses. Illness of owner requires immediate action. Inquiries invited. E. A. Dunn, Boardman Bldg. AS 4-4681 or AS 2-4483.
Times Record. August 5, 1957: 40 col 7.
Desolate Scene.
Editor The Record: It was a pleasure to read recently in the Pulse of the People of the letter signed “Encouraged” praising our Kennedy Corps of Lansingburgh. Everyone in Lansingburgh is proud of these fine young people. They are off to an excellent start, they are working hard and they have a fine program mapped out for their future projects. “Encouraged” hopes that their spirit will prove contagious and spread to other local schools. May I Add that I hope it will prove contagious and inspire some local property owners to clean up and improve their property.
An outstanding example of the lack of this spirit is the desolate scene that meets the eye of each citizen passing what was once the beautiful block of homes north of 123rd street along Second avenue. At the south end of the block where the Lansingburgh Public Bath stood, the trees have been cut down and the ground is and has been for some time strewn with sections of tree trunks and other debris. This, we are told, is to be the site of a nursing home.
Further up this block, we come to a really outstanding mess, distinguished by plowed ground and waist-high weeds. No one has bothered to state what this is supposed to turn into at some future date. On this site stood the wonderful old house, The Abbey, once the home of Cornelius Lansing, son of the founder of Lansingburgh. This fine old house originally faced the Hudson River, as it was built before Second Avenue was cut through at this point. The house faced the old road that ran along the river bank to the Lansingburgh approach to the old Waterford bridge. Later this house was known as Widow Lansing’s Tavern. Still later it became the Pine home, the roof line was changed and the entrance was changed to face the Second avenue side. When this house was razed, the beautiful lawns were torn up, left in mounds and then allowed to deteriorate into the weed-covered jungle that greets the eye at the present time.
Each time I pass this block, I feel strongly that what we need here is an organization dedicated to the principle “Save Lansingburgh from future so-called progress.” This section of the city should be re-zoned, so that no predominantly residential block could be destroyed, wherever it might be located. All commercial enterprises should be confined to the present commercial areas.
Lansingburgh is a veritable gold mine of old and historic houses and buildings. Hundreds of them still stand, unmatched in charm and number by any other place in the state. Some are partly concealed by later roof lines or larger window panes, but underneath their charm is there for anyone who may be interested to discover. In a leisurely walk around the Old Village, it is easy to believe that one is back in Colonial times.
Let the rest of the city have progress if it wishes, but what we need here perhaps is an adult Kennedy Corps to preserve the history, charm and beauty of Lansingburgh. If not an actual organization, we can at least be imbued with the spirit shown by our young people and cooperate with them in every way to preserve this lovely and historical residential area.
FRANCES D. BRODERICK
North Troy
Times Record. April 28, 1964: 12.