Although ice-boating is one of the most fascinating of outdoor sports, there is little of it done in this city nowadays, although farther down the river it is indulged in very extensively. Ice-boating no doubt is dangerous, but that fact can hardly be the reason why the young men of this section are not interested in the sport. Probably the real reason for the decadence of interest in ice-boating is that the winters of late have not as a rule been suitable, and even when there is good ice the space for the manœuvring of boats is much too cramped. Before the Cohoes and Lansingburgh bridge was built there was a fine ice-boating course above the dam, but now a large ice-boat, carrying a considerable spread of canvas, would be unable to pass under the bridge. It requires a good-sized field, for one must understand that the ice-boat is capable of covering a great distance in a very short time. Down the river, in the vicinity of Poughkeepsie and New Hamburgh, the ice boats often race with the express trains on the shore, and beat them, too, if the wind be favorable. For an ice-boat capable of running a mile a minute a stretch of two miles is too short to make the sport profitable.
Troy Daily Times. February 21, 1891: 5 col 3.

—Ice-boating has become a great sport in Lansingburgh of late, and every day since the Hudson River has been frozen over there have been a number of boats on the ice. While the pleasures attached to this sport are many, it also has its drawbacks, as Bertrand Munyon and William Morrison, of Lansingburgh, will testify. They were out in their boat yesterday afternoon and, being venturesome, attempted to go up the Mohawk River branch opposite Third Street. In doing so they went over some thin ice, which broke, letting them into the water. Fortunately the accident happened near the shore, and both were able, but with great difficulty, to pull themselves out and put their boat in position. Their clothes were badly torn, but they were uninjured.
“Lansingburgh.” Troy Times. December 31, 1908: 6 col 1. 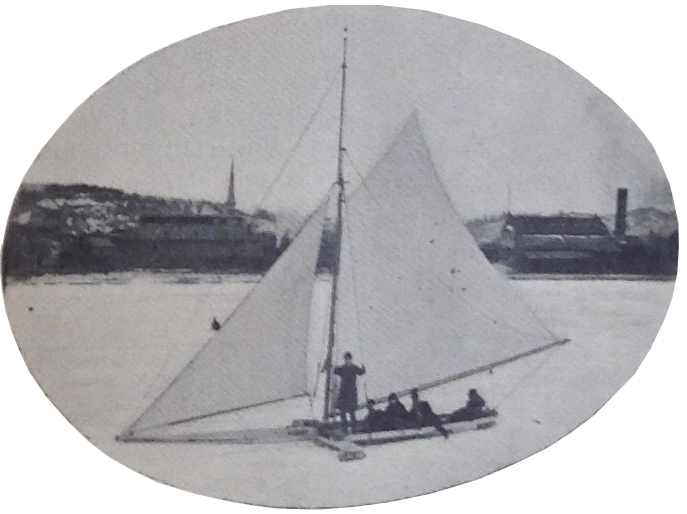 The Ice Boat Walton M., 1873.
One of the finest specimens of early ice boats on the Hudson River at this city. The owner, Horace J. Richards, now of Troy, was at the helm.
Troy Times. February 12, 1909: Art Section.

(On the 1910 US Census Horace J. Richards, above pictured on his ice boat, was living at 163 Fifth Avenue near 103rd Street.)
BOY ON ICE BOAT DROWNED.
When an iceboat traveling fifty miles an hour got beyond control and plunged into open water where ice had been cut by the Shaughnessy Ice company in the Hudson river at Troy yesterday afternoon. Morris [sic] Snyder fifteen years old, of 189 Sixth avenue, North Troy, was drowned and his companion, Nelson Smyth, of 148 Fifth avenue, was pulled from the river by men on the ice fields.
Saratogian. January 16, 1917: 1 col 5.

Skating and Ice-Boating Again.
As a result of Monday evening’s heavy rainstorm and the cold weather of yesterday and last night, the Hudson River is again in fairly good condition for skating, and a number of residents took advantage of this condition this morning. The ice-boats owned by Lansingburgh and Waterford young men were out on the river, and if the present weather continues there should be some exciting sport on the river Saturday and Sunday. The sections of the river where water was visible along the shore line Tuesday morning have all been recoated with ice.
Troy Times. March 1, 1917: col 4.