Down the River.
Mr. Willis, of Kingston, has designed a balloon or sail skate, by the use of which he is able to skate a speed on the ice nearly equal to that of a railroad express train. During a trial the other day he sailed across the river at Barrytown in 1¾ minutes.
Albany Evening Journal. February 23, 1882: 1 col 3.
Ice Sailing on the Hudson.
The present winter has been uncommonly favorable to winter sports along the Hudson, and skating, coasting, ice-yachting, have flourished with old and young. […] If Po’keepsie leads the world in ice boating, Kingston will be alike famous for sail skating. Among down-town young men the sport is destined to be very popular. A young man and his lady friend can glide along over the ice faster than a train can travel. The secret of the speed of the sail skate is the same as that of ice boating. When going with the wind, one can not go so fast as the wind, not more than twelve miles an hour, perhaps, but when sailing with the wind on the quarter, there is no limit to the speed. Mr. Willis, when the wind was blowing from the south yesterday afternoon, sailed across the river at Barrytown and back again, a distance of filly two miles, in one and three-auarters minutes.
DeRuyter New Era. March 1, 1883: col 1. 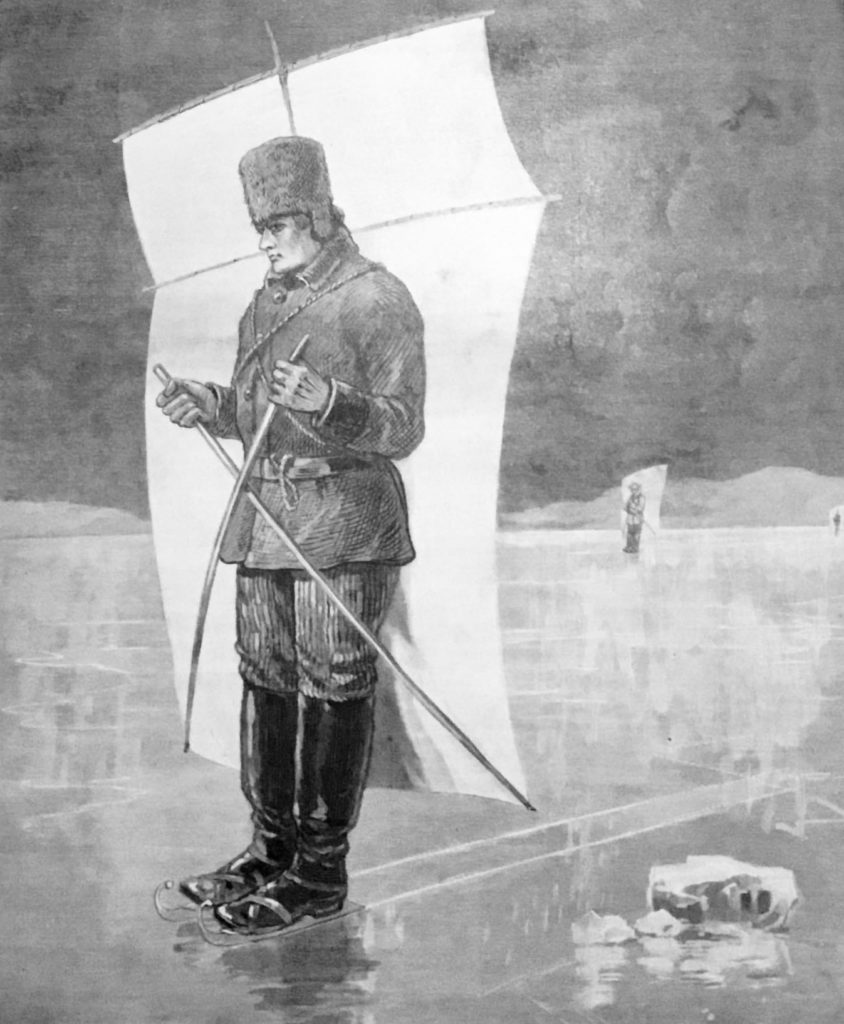 Those who find amusement on the ice have had abundant opportunity to enjoy themselves this winter. Several times the Hudson has presented an icy coating of glasslike smoothness, not marred by even a flake of snow. […] During the days when the ice is free from snow and a stiff breeze is blowing any number of small triangular sails may be seen, these sails being used to propel the skaters, and with these small pieces of muslin or canvas surprising momentum can be attained. The skaters in holding the sails can successfully tack in the same manner as a genuine sailboat. When there has been good skating the entire width of the river many of the ice harvesters have kindly placed torches around the spots where the ice has been removed, and thus accidents have been prevented.
Troy Daily Times. January 19, 1895: 5 col 2.

“Ice skating with a crude sail on his back, Eskil Berg tries to let the wind carry him across this frozen body of water [1896].” Steinmetz Digital Collection of Schenectady. New York Heritage Digital Collections. https://cdm16694.contentdm.oclc.org/digital/collection/schmuse/id/194/ 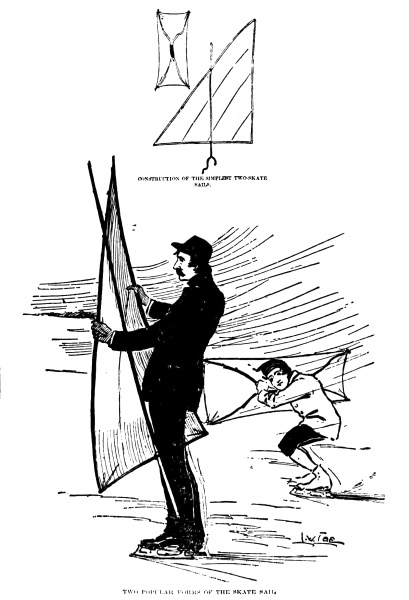 TWO DROWNED IN THE MOHAWK.
—
Col. S. Dana Greene and Wife Met Death at Schenectady Yesterday Afternoon—Colonel Greene Participated in the Battle of Santiago.
Col. S. Dana Greene and wife, of Schenectady, were drowned while skating on the Mohawk river at that place late yesterday afternoon. Colonel and Mrs. Greene had a large sail which they carried in order to enjoy the pleasure of sail skating. It is supposed that the sail held in front of them prevented them from seeing a cleared space where ice had been cut.
Mrs. Greene’s cries were heard by skaters far up the river and by a man on the railroad bridge near where the accident occurred. The rescuing party saw Mrs. Greene’s body floating down stream, the clothing having buoyed it up. A boat was secured and the body was drawn to the safe ice. It is thought life was extinct when the body was taken from the water.

The Second Body Found.
The body was later identified as that of Mrs. Greene and word was sent to Colonel Greene, as it was not known to the party that the couple had been skating together. When the intelligence arrived that Colonel Greene and his wife had last been seen alive skating together that afternoon, search was at once commenced for Colonel Greene’s body. After three hours’ searching the body was found.
The news of the accident caused widespread sorrow in the community. Colonel and Mrs. Greene having been very popular. They were married in 1896.

In the Spanish-American War.
Colonel Greene was a participant in the Spanish-American war, acting as navigating officer on the Yankee. He served in the bombardmetnt of Santiago. Colonel Greene had a romantic career, which was influenced by the woman who became his wife. He graduated from the Annapolis Naval Academy and was an ensign when he met and fell in love with Miss Cornelia Chandler, daughter of former Secretary of the Navy Chandler. Commodore Chandler was unwilling that his daughter should marry an ensign, and the young naval ensign gave up his calling for the sake of the woman of his heart, and won wealth and a high social position which enabled him to successfully conduct his suit. His father was a lieutenant on board the Monitor during the famous sea fight between the Merrimac and the Monitor. Colonel Greene was an aid on the staff of Governor Roosevelt and was one of the prominent men in The General Electric Company of Schenectady.
Troy Daily Times. January 9, 1900: 3 col 5.
Sail-Skating on the Hudson.
One of the most exhilarating and healthful sports in which man has ever indulged, and which is very popular on the upper Hudson in mid-winter, is sail skating. With a pair of shining steel-runners securely attached to one’s shoes, and a sail to furl and unfurl at the skater’s pleasure one is equipped to defy the two-minute trotter and the Empire State Express, as he literally flies over the ice at a record-annihilating speed. It is great sport, and another point in its favor is that it can be enjoyed on any lake or stream where skaitng is possible.—From “In the Trail of the Traveler,” in Four-Track News.
Perry Record. March 31, 1904: 3 col 5.

We built skate sails and iceboats, and I recall begging many a family bedsheet for a skate sail. No Coast Guard icebreakers crunched up and down the river then, and the Hudson often was glass ice, crinkled only with cracks caused by the tides.
Barr, Dann. “Barr None.” Albany Times-Union. January 29, 1961: B2.